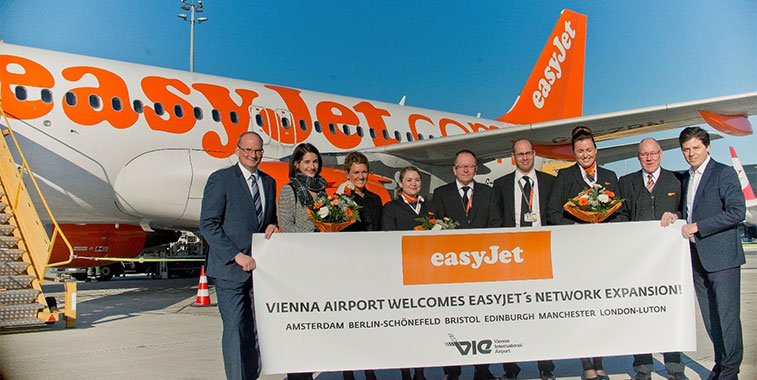 easyJet has recently started six new routes to the Austrian capital, helping the airport get close to 23 million annual passengers in 2015. The airport welcomed well over 20 other new services during the last 12 months, according to anna.aero’s New Route Database.

Vienna Airport handled almost 23 million passengers in 2015, a new record for the facility serving the Austrian capital. Passenger demand has grown by 44% since 2005, with 2007 the last year when traffic grew by more than 10%. Although passenger numbers were up only a modest 1.3% in 2015, the airport welcomed over 30 new services according to anna.aero’s New Route Database. In a recent press release the airport revealed that the most popular destinations in four geographic regions all saw a decline in passenger numbers in 2015: Frankfurt (Western Europe) was down 12.2%; Moscow (Eastern Europe) was down 22.7%; Dubai (Middle East) was down 2.8%; and Bangkok (long-haul) was down 2.4%. 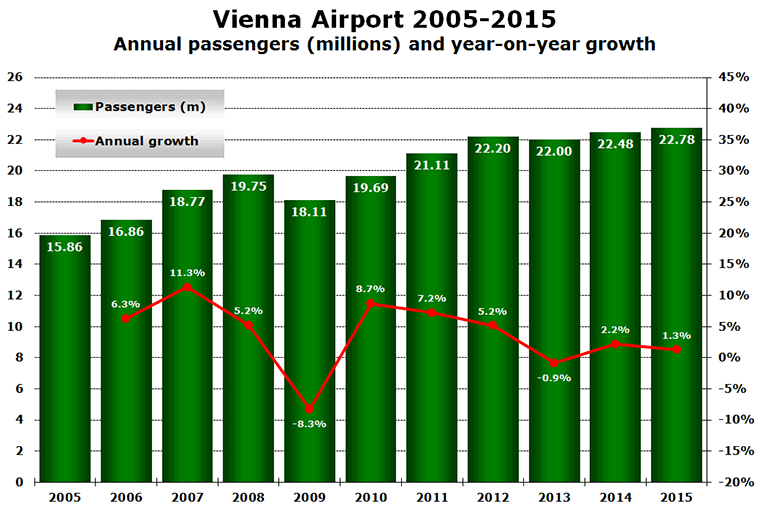 The airport’s seasonality profile is one of the most consistent in Europe. However, its peakiness has been increasing in recent years as anna.aero’s SVID (Seasonal Variation in Demand) confirms. In 2013 it was 2.98, increasing to 3.35 in 2014 and 4.40 in 2015. This can be seen by the fact that summer 2015 was better than in previous years, while the early months of the year had fewer passengers than in 2014. 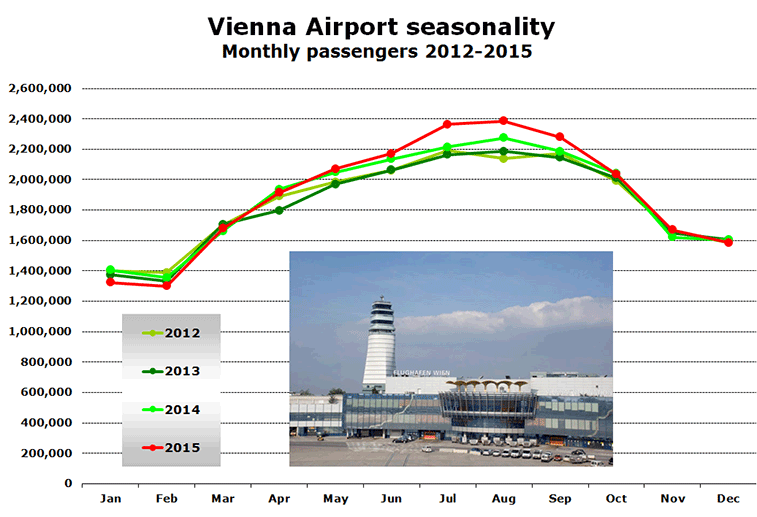 Analysis of planned schedule capacity for this summer confirms that Austrian Airlines remains the dominant carrier at the airport, with parent company Lufthansa ranked fourth. The German carrier’s low-cost subsidiaries germanwings and Eurowings also both feature among the top 10 airlines. NIKI and its parent company airberlin rank second and third. As a result, Turkish Airlines in sixth place is the highest ranked airline not controlled by either Lufthansa or airberlin.

A total of 57 airlines operate scheduled services in the peak summer period according to OAG Schedules Analyser. New carriers welcomed (or welcomed back) in 2015 included Air Moldova (to Chisinau), Europe Airpost (to Toulouse) and Eurowings. For the purposes of this analysis Eurowings (IATA code EW) and germanwings (IATA code 4U) are considered separate airlines as that is how they still appear in OAG Schedules data. 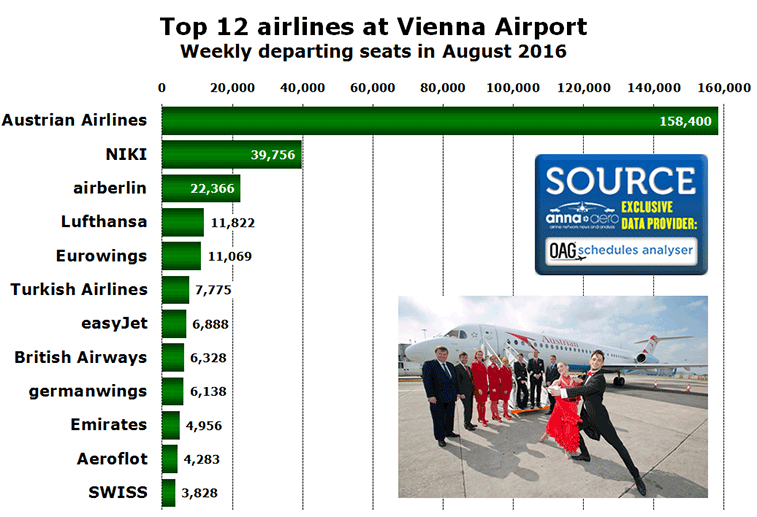 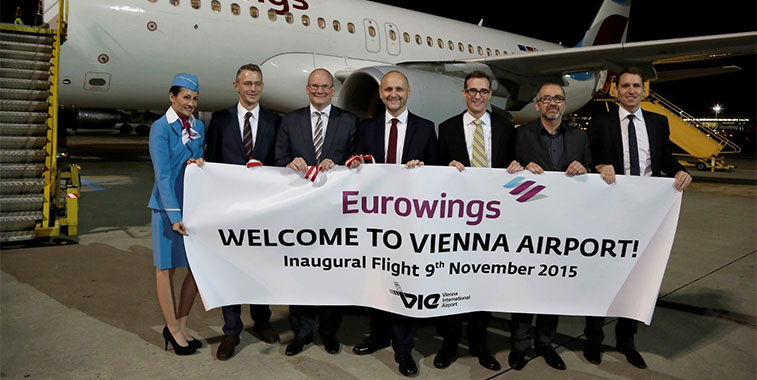 Eurowings began based operations at Vienna in early November with flights to Barcelona, London Stansted and Palma de Mallorca. More new routes (including Bastia, Faro and Rome) are scheduled to launch at the beginning of the S16 season at the end of March.

Germany remains by far the biggest country market with over 70,000 weekly scheduled departing seats in August, an increase of almost 10% on S15. Spain remains in second place with capacity growth of 8.5% planned for this summer. The UK has leapt from eighth to third thanks to an almost 40% increase in seat capacity. This is primarily thanks to easyJet launching new services from its Bristol, Edinburgh, London Luton and Manchester bases, but British Airways’ new London Gatwick service (launched last September) and Eurowings’ London Stansted service (launched in November) also make a significant contribution. Even Austrian Airlines expanded its presence in the UK by starting service to Manchester on 10 September. 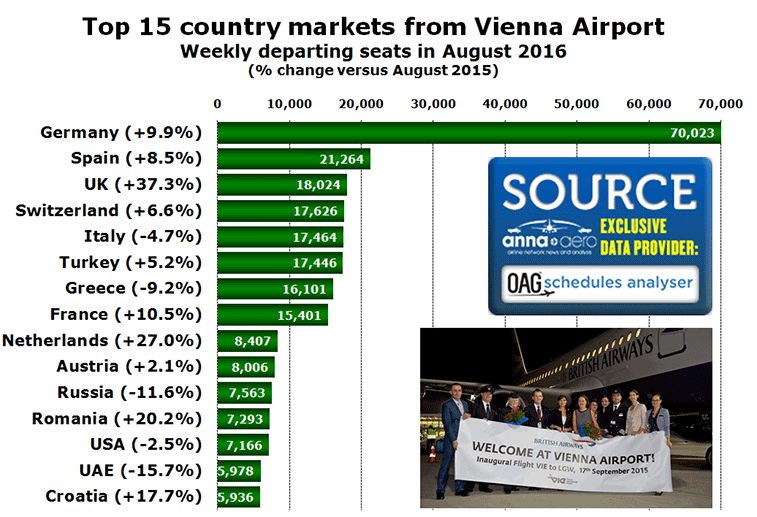 Other growth markets include Netherlands (+27%), Romania (+20%) and Croatia (+17%). The reduction in capacity to the UAE can be explained by the decision last September by Austrian Airlines to withdraw its Dubai service from the market after 19 years, leaving Emirates as the only carrier on the route, operating twice-daily. In addition NIKI continues to offer daily flights to nearby Abu Dhabi.

A total of eight airlines have so far announced plans to launch new services from Vienna in 2016. Apart from locally-based Austrian, Eurowings and NIKI, there will also be new routes from easyJet, Jet2.com, SAS, Transavia and Vueling. The 19 new services offered by these carriers will be spread across 10 countries, including non-European states such as Cuba, China and Iran.

For SAS this marks a return to Vienna, while Vueling already operates flights from Barcelona and Rome. Jet2.com’s new Edinburgh service appears to replace its Manchester service, which was launched in May 2014 and operated last summer, but has been dropped for this summer, presumably as a result of both Austrian Airlines and easyJet entering the market in the last 12 months.

Despite all these new routes the airport is forecasting only modest traffic growth in 2016 of between 0% and 2%, according to its latest press release. 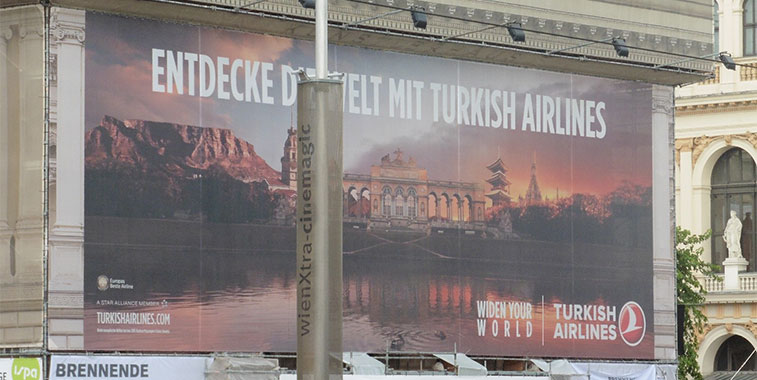 Turkish Airlines is the biggest airline at Vienna Airport that is not directly affiliated with either Lufthansa or airberlin. The Star Alliance carrier offers up to five daily flights to Istanbul’s main airport as well as daily flights to Sabiha Gökçen and serving Ankara, Kayseri and Samsun Carsamba.