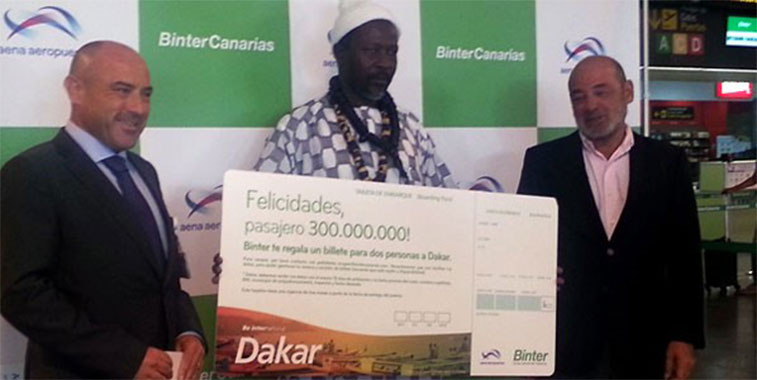 The last new route that BinterCanarias started (according to anna.aero’s New Route Database) was in October 2013, when it began weekly flights from Gran Canaria to Dakar in Senegal. One of the passengers on the first flight was also passenger number 300 million at the Canary Islands airport since the facility opened in 1933. Many of those 300 million passengers will have flown on Binter, as the airline is based on the island and has its biggest operation there in terms of weekly seats.

BinterCanarias, more commonly known as just Binter, is a regional airline based on Gran Canaria, which is the second most populous of the Canary Islands. The carrier currently operates 20 aircraft (according to Planespotters.net), with the fleet mainstay being its 18 68-seat ATR 72s, supplemented by two leased 90-seat CRJ 900s (from Air Nostrum).  Binter currently serves 18 airports with close to 1,000 weekly flights, predominantly across the Canary Islands, but it also operates international sectors to Cape Verde, Gambia, Mauritania, Morocco, Portugal and Senegal. 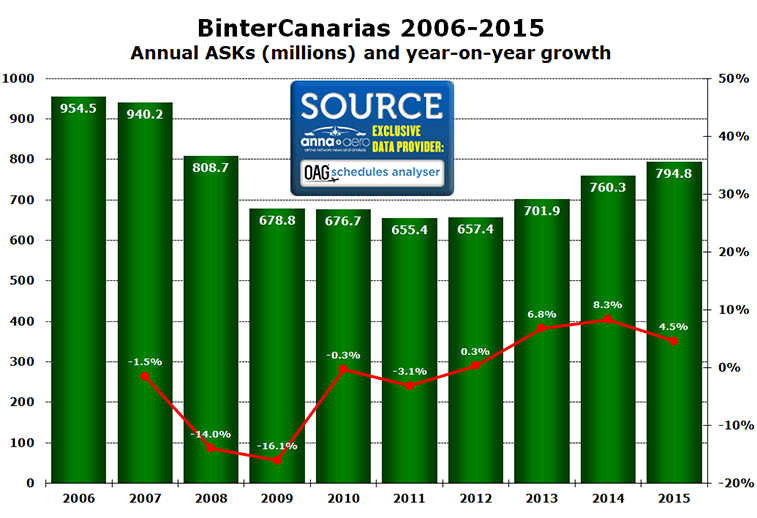 As can be clearly seen in the graph, Binter underwent a period of operational consolidation between 2006 and 2011, with ASKs dropping by nearly one third in that time. However, beginning in 2012, the airline has been on a clear growth trajectory again in terms of this particular metric, with annual increases in each of the subsequent years driven to some extent by international expansion to regional destinations. While clearly it’s early days in terms of this year’s final ASK count, the airline already has filed 727.5 million for 2016 so far, based on its schedules within OAG data.

Unsurprisingly for an airline whose raison d’être is to serve the communities of the Canary Islands, four out of the five biggest airports of those islands (Tenerife South is the other) are also Binter’s four most significant operational bases, commanding 83% of weekly seats between them. As the regional airline operates to just 18 airports currently, the top 13 represent over 99.2% of total weekly seats, up from 98.9% since last year. The carrier’s total seats for the week commencing 19 January have increased marginally over the same week in 2015, with a 1.5% rise in capacity noted. Outperforming that overall growth is Binter’s #1 base of Gran Canaria, which has grown by 2.9% over the same period, outstripping the annual increase recorded at #2 airport Tenerife North, which could only muster a 0.6% rise in weekly seats. 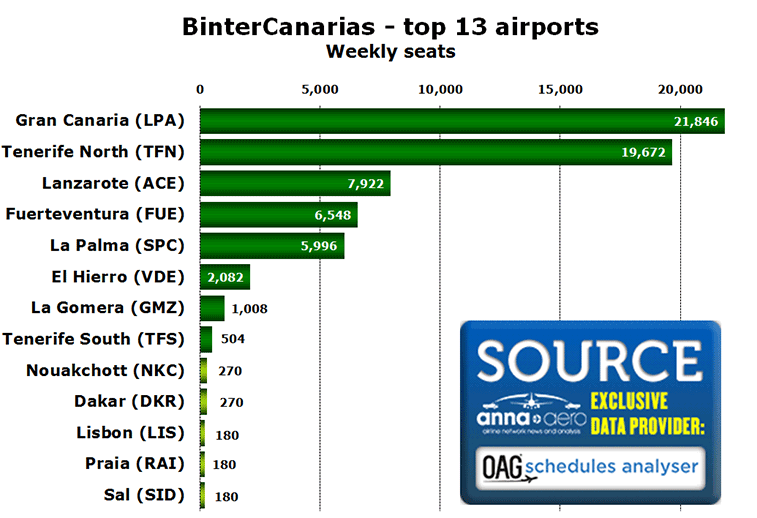 Five international stations make it into the airline’s most well served airports (highlighted in light green), but are fairly insignificant when compared to Binter’s inter-island operations. One of these, Nouakchott in Mauritania is also the fastest growing of the airline’s top 13 airports, albeit from a low base, having recorded a 25% hike in weekly capacity. Only one airport, El Hierro, has registered a year-on-year decline (0.3%) in seats of all of Binter’s biggest operational stations. Worthy of note is the fact that six of the top 13 airports registered an identical amount of weekly seats in 2016 as they did in the same week in January 2015.

CRJ 900 used on biggest routes – and some small ones

With almost a homogeneous fleet of the same aircraft type, the share of weekly seats and frequency do almost match, with some slight, almost imperceptible variances as a result of where the carrier’s two leased-in CRJ 900s, which offer more capacity than that of the ATR 72, are used. Of the top 12 routes which utilise the 90-seat regional jets, these include Gran Canaria to Tenerife North (16 weekly flights), Gran Canaria to Lanzarote (14) and Gran Canaria to Nouakchott (thrice-weekly). The residual flying programme for its two regional jets are all on airport pairs which have either twice-weekly or weekly operations. 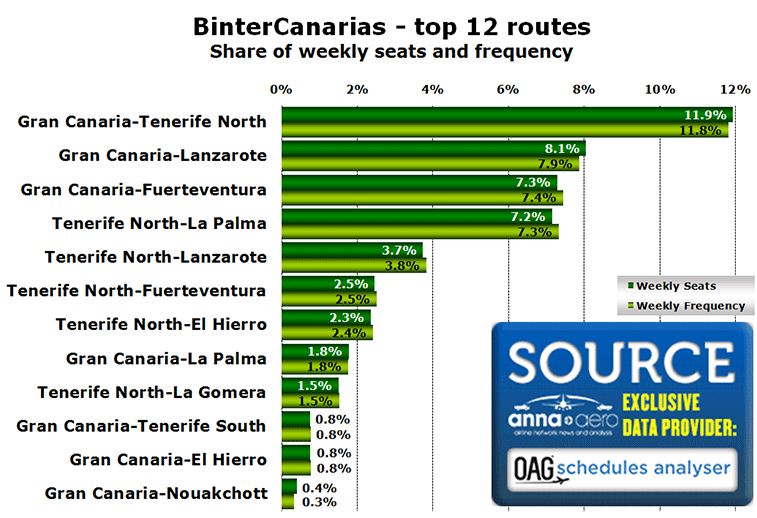 Binter operates five routes at a frequency of five times daily (or equivalent), with the airline’s most important route being flown 108 times a week. A total of 11 routes are flown on at least a daily basis or more. In the week being analysed, the carrier was scheduled to operate 67,172 seats across 914 weekly frequencies, according to OAG schedules data.

The airline’s route development is far from dynamic, and when consulting anna.aero’s New Route Database, the last routes started by the airline were in 2013 and have largely been on low frequency, international sectors – Gran Canaria to Banjul in Gambia (January); Tenerife North to Marrakech in Morocco (July); Tenerife South to El Hierro (September) and Gran Canaria to Dakar in Senegal (October). Looking forward to S16 and beyond, the airline is planning to launch operations to Agadir from Tenerife North on 2 March. In fact, the airline did offer the city pair in S15. However, there were only eight round trip flights operated. For 2016, Binter’s flights from its second largest base to the Moroccan city will be more substantial, with 30 or more round trips anticipated. 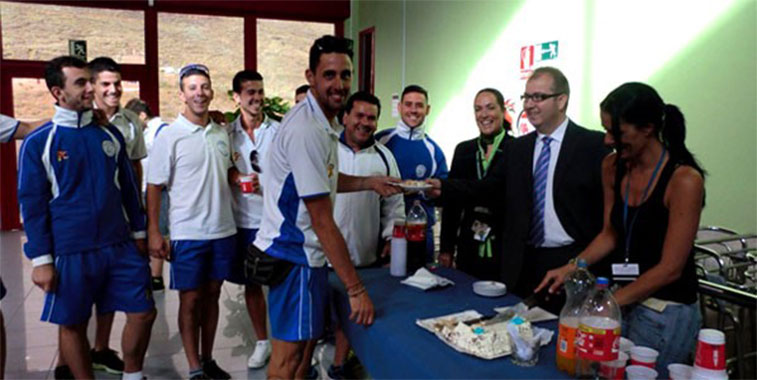 A new intra-Canary Islands service between Tenerife South and El Hierro was started on 21 September 2013 by the less than prolific new route starter BinterCanarias. Let’s hope that the Tenerife football team Club Deportivo Marino Playa Las Americas who were on the first flight were more prolific in front of goal that day. The airline will start a new international sector from Tenerife North to Agadir in Morocco on 2 March.