Just in the last month China’s airlines have launched a range of new international routes, including: Air China from Beijing to Havana (via Montreal), Beijing Capital Airlines from Hangzhou to Madrid, Shenzhen Airlines from Shenzhen to Tokyo Narita, and China Eastern Airlines from Shanghai to Brisbane. International capacity from Chinese airports grew by more than 10% for the sixth straight year in 2015.

Analysis of OAG Schedules data reveals that capacity on international routes from China grew by almost 14% in 2015, the highest rate of growth since 2007 (which was only just over 14%). Capacity growth has been between 10% and 14% for each of the last six years. As China’s economic growth slows (it grew by ‘just’ 6.9% in 2015, its slowest rate for 25 years) the country’s airlines seem to be getting ever more interested in expanding their international networks. Since 2009 capacity on international routes has almost doubled, with almost nine million additional one-way seats being added in 2015, an all-time record increase. 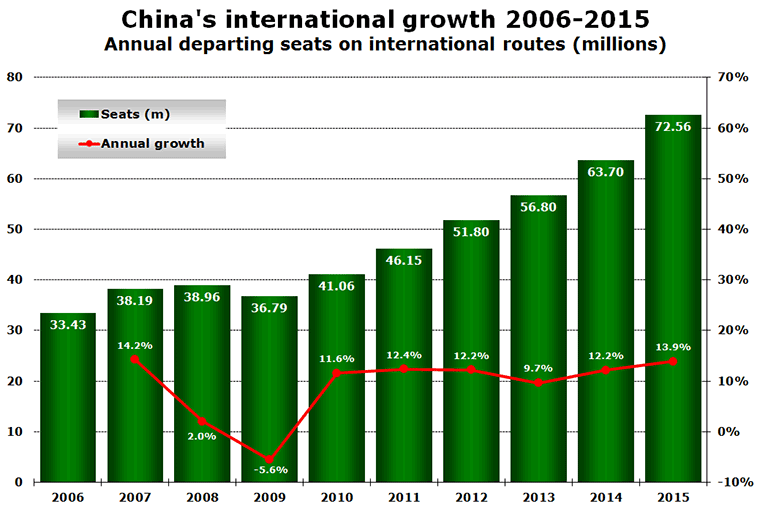 In 2015 there were non-stop services from China to 71 countries, an increase of four on 2014. South Korea remained the leading international country market, extending its lead over Hong Kong. The latter was the only country market out of the top 15 to see a capacity reduction in 2015. Several countries saw extremely high growth, notably Thailand (+67%), Vietnam (+45%) and Japan (+30%). Thailand’s growth of 67% in 2015 followed growth of 17% in 2014. According to anna.aero’s New Route Database over 50 new services were launched between China and Thailand in 2015 encouraged by an easing of visa restrictions. Australia, France and the US also experienced high double-digit growth last year. The top 15 country markets account for 86% of all international seat capacity. 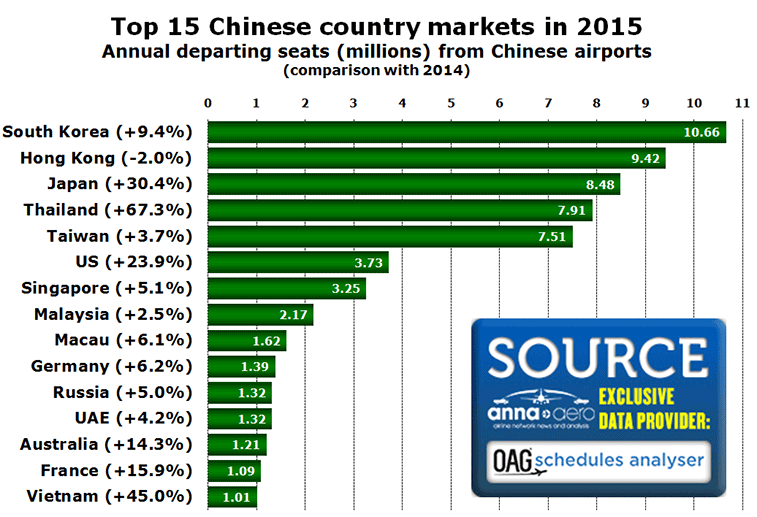 While total capacity growth last year was just under 14%, China’s big three airlines each grew their international capacity by between 15% and 21%. Of the top 15 airlines four others also grew capacity last year by more than 10%. Three of them were local Chinese carriers (Shanghai Airlines, Spring Airlines and Xiamen Airlines). The notable exception was Thai Airways which grew its Chinese seat capacity by 15%. 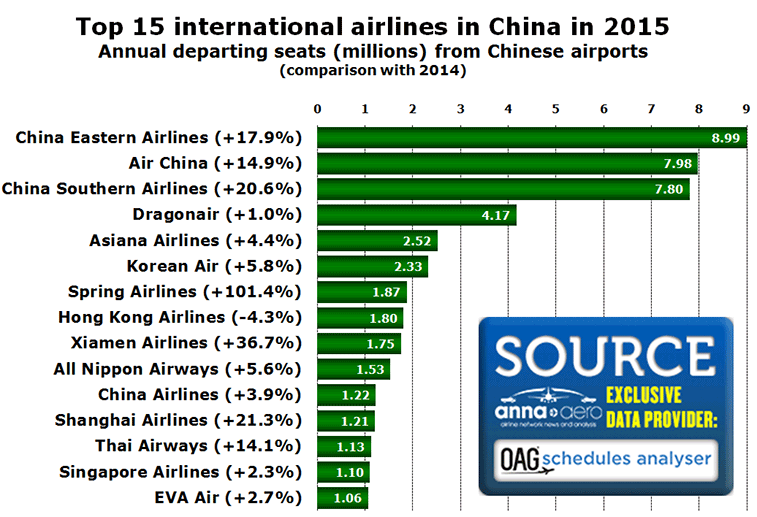 The top 15 airlines accounted for 64% of all international seat capacity last year to/from China. In 2015 a total of 140 airlines operated international routes to airports in China, up from 126 a year earlier. There are no European carriers among the top 15 and even Emirates is missing, only just scraping into the top 20. Another notable absence is that of Hainan Airlines, which also just fails to make it into the top 15. 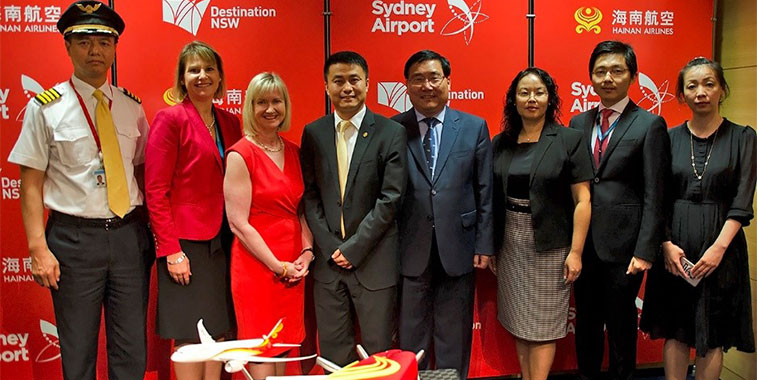 Hainan Airlines is not quite yet one of the top 15 airlines operating internationally from China, but new route launches like this one from Xi’an to Sydney on 23 December will probably help it get there in 2016.