It’s been a busy few weeks for cake bakers and flag makers in Sydney, as the airport has recently welcomed the arrival of Xiamen Airlines services from Fuzhou (29 November) and Xiamen (5 December), All Nippon Airways from Tokyo Haneda (11 December), American Airlines from Los Angeles (19 December) and Hainan Airlines from Xi’an (23 December). The airport will have to wait until some point in Q1 2016 before it breaks the 40 million annual passenger (rolling year) barrier however.

So close, yet so far. Sydney Airport, Australia’s biggest, will have to wait another year before it breaks the next significant milestone on its passenger throughput journey – the 40 million annual passenger barrier. Despite growing by nearly one million passengers in the last 12 months, Sydney was less than 350,000 passengers away from reaching this landmark volume. Of course, on a rolling year basis it may well achieve the 40 million mark in 12 months at some point in Q1 2016, but it’s always nice to achieve these significant throughput breakthroughs on a calendar year basis – it’s just neater!

Currently (week commencing 22 January) the airport is serving 88 global scheduled destinations non-stop, up from 85 in the same week last year, according to OAG Schedules data. When looking at domestic destinations a year ago, the airport boasted 44 network points, this has fallen by two during the same week in 2016. To put this route offer into context, Australia’s second airport in Melbourne serves 29 domestic and 28 international non-stop points in January 2016, with Brisbane, the country’s third largest facility in terms of passenger traffic, offering 35 domestic and 27 international non-stop airport pairs. 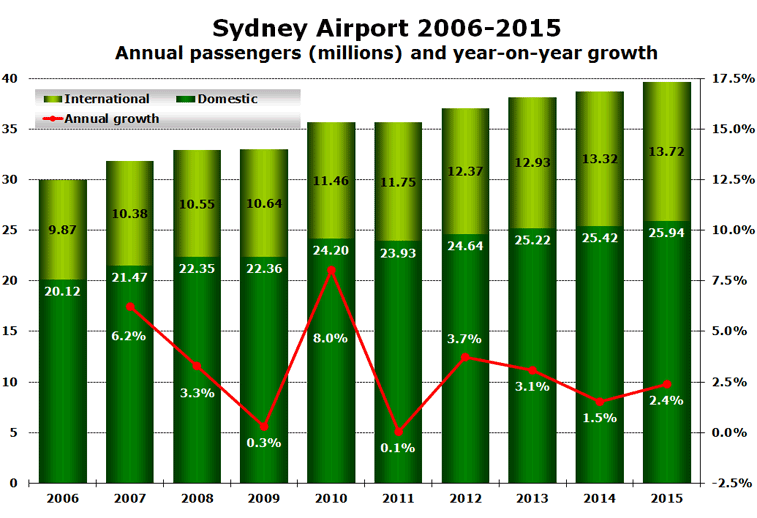 Quite uniquely amongst the many airports we profile every week on anna.aero, Sydney has managed to maintain its growth over the last 10 years, averaging annual growth of 3.2%. Indeed, there are no double-digit growth years which may have been seen elsewhere around the world, but equally there are also no negative growth years which have been witnessed by many airports particularly in 2008, 2009 and 2010. Also noteworthy is the gradual up-tick of the Australian airport’s international share of overall traffic, rising from 33% in 2006 to 35% in 2015.

Entering Sydney’s monthly passenger data for 2014 (full 2015 still not available) into anna.aero’s Seasonal Variation in Demand (SVID) calculator, the airport performs very well, generating a score of 0.36 ‒ an ‘Excellent’ rating. The airport ranks 6th out of the 83 airports which have had their 2014 figures analysed, lying between Sao Paulo Viracopos (0.34) and its Australian peer Melbourne (0.37). Looking at the two years prior to 2014, the airport has marginally improved its performance against its 2013 result of 0.39, and has matched the outcome attained in 2012.

In order to gain a thorough understanding of Sydney’s seasonality, anna.aero’s data elves also ran a comparison with Australia’s next two biggest airports, Melbourne (0.37 ‒ Excellent) and Brisbane (0.45 – Excellent). From this, we can see that these 20 million plus annual traffic airports each have a more pronounced seasonality, albeit a marginal one. For all three airports, the quietest month of the year is February, with October being the busiest month.

Unsurprisingly, Australia’s four main carriers, which should maybe be Australia’s big two airlines given the ownership structures in place ‒ Qantas and its daughter LCC Jetstar Airways and Virgin Australia Airlines and its daughter LCC Tigerair Australia ‒ dominate the field at Sydney, commanding 73% of all weekly seats between them. This share is not split evenly, with Qantas/Jetstar taking 49%, while Virgin Australia/Tigerair hold 24%. The top 12 airlines have 87% of weekly seats in January 2016, down slightly from the 88% recorded a year ago. 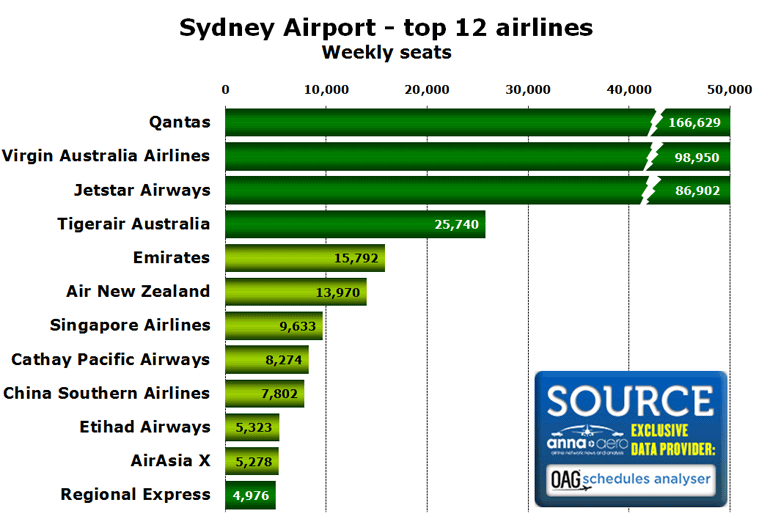 While Australian carriers control the majority of seats at Sydney, there is also a fairly substantial sized slug of international airline capacity on display too (with these carriers highlighted in light green). One noticeable absence from the top dozen carriers this year is Malaysia Airlines which due to its ongoing restructuring of its network has fallen from ninth spot in 2015, to a lowly 15th this January, with its weekly seats plummeting from 5,943 to 3,962. This top table tumble, coupled with its own 31% capacity increase, has opened the door for Etihad Airways, which has risen from 14th spot last year to 10th in 2016. However, China Southern Airlines is the fastest growing top 12 airline, with a 41% annual increase in weekly seats being witnessed.

Home to one of the world’s busiest routes

Overall seat capacity at Sydney has risen by 3.4% year-on-year, with weekly seats available breaking through the 500,000 barrier for the seven days in question. According to this week’s schedules using OAG’s data, the Sydney to Melbourne route is the world’s fourth busiest city pair in terms of weekly seats, behind only Seoul Gimpo to Jeju, Tokyo Haneda to Fukuoka and Tokyo Haneda to Sapporo Chitose – all domestic routes too. 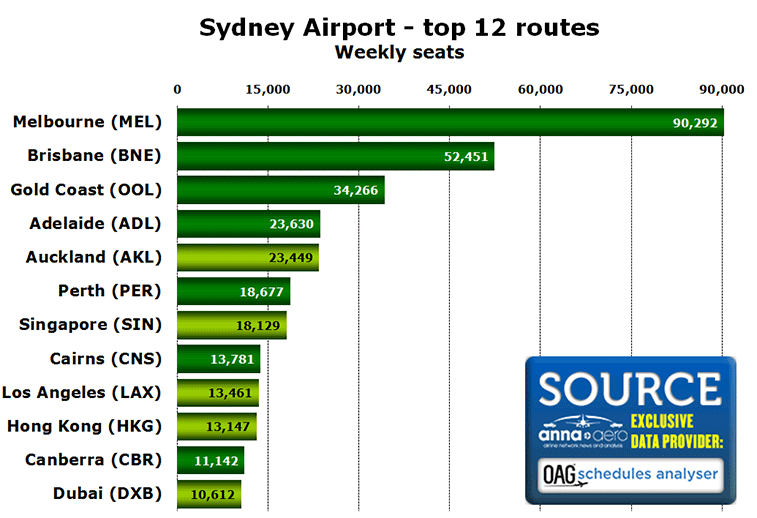 The vast distances involved in travelling between Sydney and other major towns and cities in Australia have made domestic air travel very important for the airport. That said, the airport’s top 12 routes in terms of weekly seats is still peppered with five international routes (highlighted in light green). Indeed the fastest growing route is international, with Hong Kong witnessing a 26% capacity hike since last January (Cathay Pacific Airways has grown its capacity by 13% versus January 2015), seeing off the 19% rise in weekly seats between Sydney and Cairns for top spot. The route which has been causing the most headaches for airline network planners has been Perth, which has fallen by 14% since last January, presumably on the back of a reduction in traffic travelling to the capital of Western Australia to support its vast natural resources industry.

According to anna.aero’s New Route Database, there is plenty of route development activity still to come at Sydney during 2016, including: China Southern starting flights from Shenzhen on 27 January; Qatar Airways finally gaining access to Sydney from 1 March; Regional Express launching a domestic service to Cooma; and Air China beginning flights from Chengdu. Cake bakers and flag makers of Sydney take note!