Air Canada commands the show in the US – Canada market; seat capacity up 2.9% between the two nations 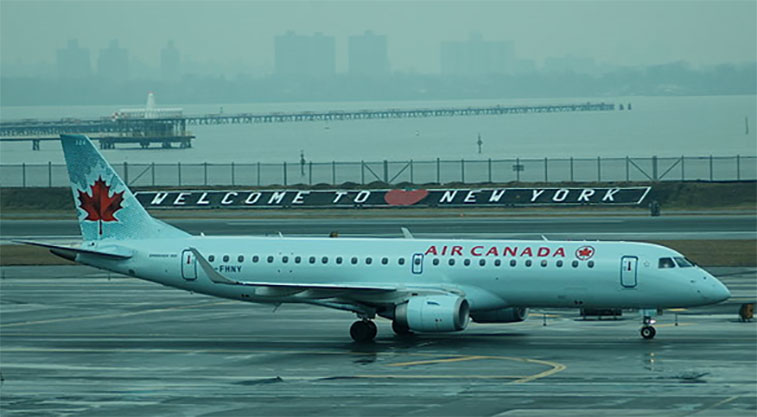 Number one airline in the market…check. Number one airport in the US…check. Flying to the most popular Canadian airport….most likely. anna.aero’s data elves do not know the final destination of this E190, but two out of three factors is not bad. Air Canada remains the number one carrier in the US – Canada market after recording a growth in capacity over the past 12 months of 8.0%, while New York LaGuardia remains the number one US destination from the country just over the northern US border. The route from Toronto Pearson to New York’s third largest airport is also the largest in the market in terms of available seat capacity, with Air Canada commanding just over 51% of seats on the route, while American Airlines and WestJet share the remaining 49%.

On 18 January, route #201 was started between the US and Canada when National Airlines commenced services between Orlando Sanford and St. Johns (and automatically becomes 184th most popular route between the two countries). With this news, anna.aero though it would be a good idea to analyse the market between the two North American nations, especially now that the route count between the two has dropped from 207 last winter according to OAG Schedules Analyser data. However, despite the drop in direct links, the overall seat capacity between the two countries has grown 2.9% over the past 12 months.

According to CBC news in Canada, the cheap Canadian dollar (compared to the USD) compelled Americans to take almost two million trips to Canada in June, a rise of 3.3% compared to the month previous, making it the highest level for travel in a month between the two nations since passport requirements came into effect seven years ago. Looking at data published by Statistics Canada, air travel in relation to tourism between the US and Canada for October 2015 (latest data available) had grown by 4.5%, with a year-to-date change (Jan-Oct) of 6.2% when compared to the same time frame of 2014. What should be noted is that road transport between the two nations for the year-to-date had grown 9.3%, and the volume of people driving rather than flying is double that of air transport. 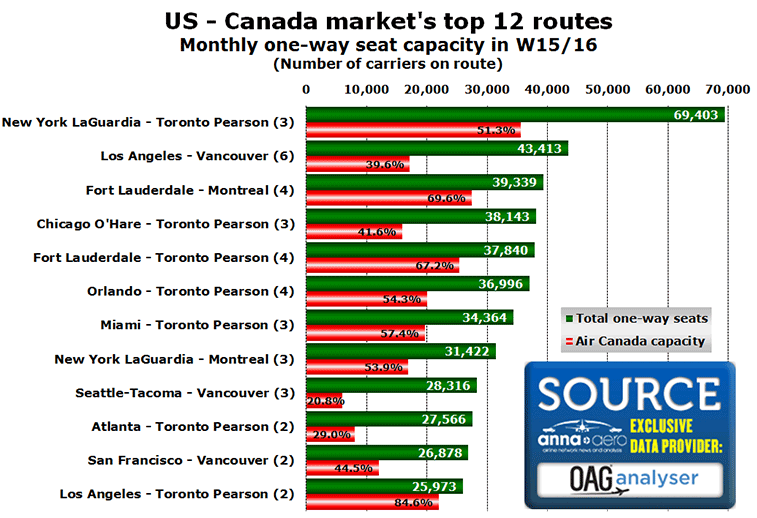 Air Canada commands the show within the top 12

With US – Canada being such a large country market pair, it comes of no surprise to discover that none of the top 12 routes between the two countries is a monopoly city pair, however the number one carrier in the market, Air Canada, is the only airline to serve all of them. Of the top 12, Air Canada controls a majority of seat capacity on nine of the routes, including all of the top eight, as well as the city pair of Los Angeles – Toronto Pearson (12th biggest). The only routes where Air Canada does not control a majority of seats within the top 12 are (dominant airline and seat share): Seattle-Tacoma – Vancouver (Alaska Airlines – 47%), Atlanta – Toronto Pearson (Delta Air Lines – 71%), and San Francisco – Vancouver (United Airlines – 56%). When comparing the top 12 routes this winter to the same period of last year, only one route has slipped. The 3,140-kilometre sector between Las Vegas and Toronto Pearson has dropped from tenth position in W14/15 to 13th in W15/16 – a result of the city pair seeing a reduction in seat capacity of 2.9%. The route which has replaced it within the top 12 is the 1,290-kilometre pairing of San Francisco and Vancouver, which has witnessed an increase in seat capacity of just over 20% during the past 12 months. The only other routes in the top 12 to encounter double-digit growth are New York LaGuardia – Montreal (14%) and Orlando – Toronto Pearson (11%).

Although Air Canada is the number one carrier in the market, and has grown by 8.0% between the two nations over the past 12 months, three other airlines have actually recorded double-digit growth between the two nations, with Delta Air Lines (14%; fifth largest carrier in market), Porter Airlines (14%; sixth), and Air Transat (13%; ninth) all recording stronger growth than Canada’s national carrier. The carrier which has fared worst in the market over the past 12 months is American Airlines (fourth), with its combined operations with US Airways representing a total decline in seat capacity of 15%, while fellow US carrier United Airlines (third) is showing a decrease of 10%. The most stagnant airline between the two nations is WestJet (second), which has encountered a growth in seat capacity of just 0.6%. 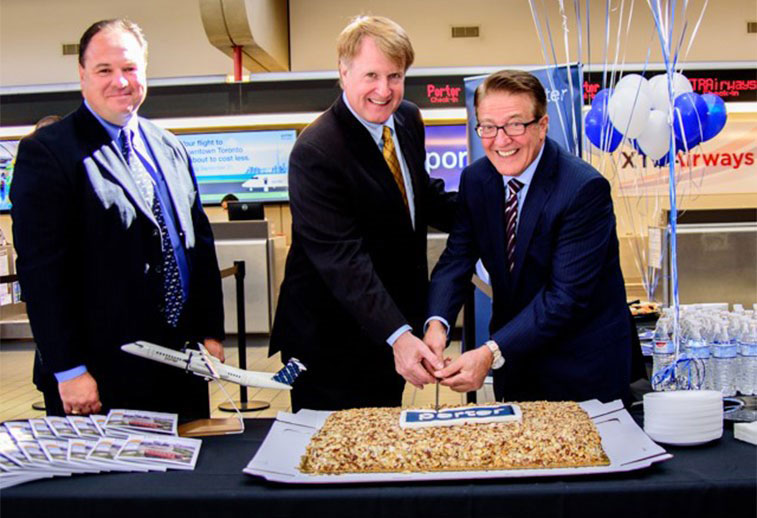 On 21 September, Porter Airlines commenced a twice-daily service (except Saturdays) between Toronto City and Pittsburgh. This winter, the regional Canadian airline is recording a growth in seat capacity between the US and Canada of 14%, meaning that it is joint first with Delta Air Lines in regards to capacity growth for a carrier between the two countries during the past 12 months. 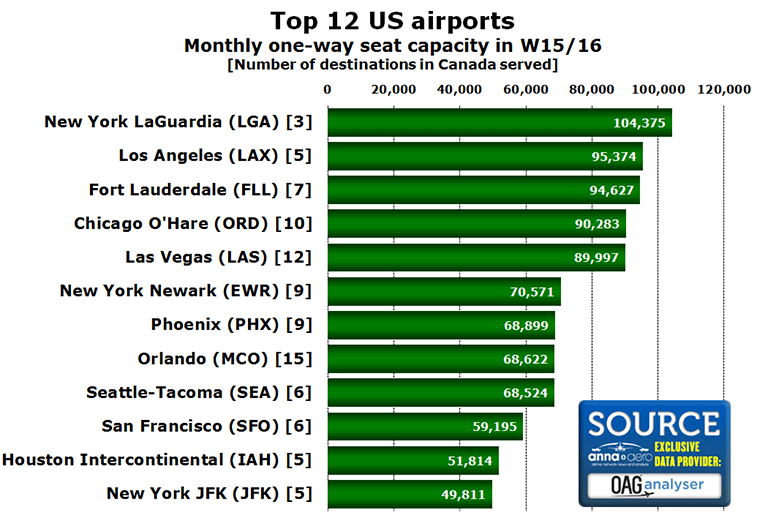 New York LaGuardia is number one US destination

New York’s LaGuardia Airport is connected to three cities directly, namely Toronto (Pearson), Montreal and Ottawa, with Air Canada serving all of them directly. WestJet and American also serve Pearson, with the latter also serving Montreal from the Big Apple’s third largest airport. Although LaGuardia is the number one connected airport in terms of available seats, as it was last year, when it comes to directly served destinations it is a different picture. Leisure markets in the US such as California, Florida and Nevada are much better connected with regards to total destinations, with Orlando seeing direct services to 15 airports in Canada despite being the eighth biggest destination in terms of seats. This shows that many of its Canadian destinations operate at lower frequencies than the more business related links to Canada from US cities such as New York. In W15/16, a total of 61 US airports have direct services to Canada, up from the 60 which had direct air services last year. 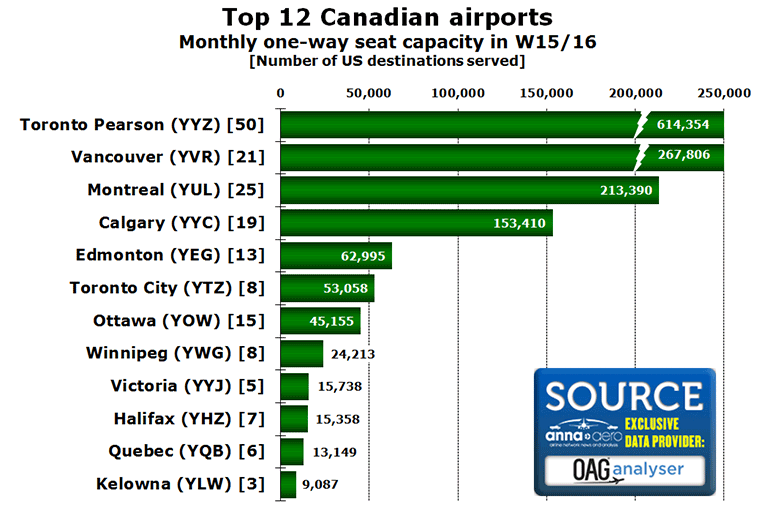 Within the Canadian market, Pearson, which has seen its seat capacity to the US grow by 5.0% during the past year, remains the number one connected airport in terms of destinations served direct from the US. The airport also occupies 40% of available seat capacity from the US to Canada, making it the number one destination in the Canadian market. In total, 23 airports in Canada are connected directly to a US destination. In relation to the top 12 airports, Winnipeg has recorded the biggest growth in capacity from the US during the past year, up 19%. The second best performing airport is Toronto City, up 14%, helped by Porter inaugurating services to Pittsburgh and Melbourne (Florida) during the start of W15/16. Canada has witnessed three of its airports gain new routes the US during the past 12 months, namely Abbotsford (WestJet to Las Vegas), Windsor (National Airlines to Orlando Sanford) and Charlottetown (WestJet to Orlando). However, one airport has lost direct links to the US. Nanaimo no longer has its direct link to Boeing Field, a service which was provided by Kenmore Air, an airline providing regional land and seaplane flights in Washington State and south-western British Colombia.

How will the market look when Jetlines arrives?

Marketing itself as Canada’s next ULCC, Jetlines is an anticipated start-up carrier which has signed a definitive purchase agreement with Boeing to acquire up to 21 737 MAXs for delivery commencing in 2021. Looking at its current route map, which is designed around 16 aircraft, the carrier will operate on 18 routes between Canada and the US, with its three key hubs being in Vancouver, Winnipeg and Hamilton. Its strategy involves using non-major airports in Canada to attract new passengers, with its current forecast believing that there is a market for 10 million new passengers per annum. Looking at its anticipated route map, services between Hamilton – Orlando, Vancouver – Las Vegas, and Vancouver – Honolulu are the only ones currently served directly, meaning that there is 15 planned routes between the US and Canada which are not yet connected. What can be seen though is that with its ULCC strategy, it is targeting the key leisure US markets of Florida and California, which means that these routes will presumably be operated at a low weekly frequency, with a main focus for its network being on the Canadian domestic market. Many new sectors between the US and Canada may well be being discussed at next month’s Routes Americas in Puerto Rico, where anna.aero will again be producing its show daily magazines. 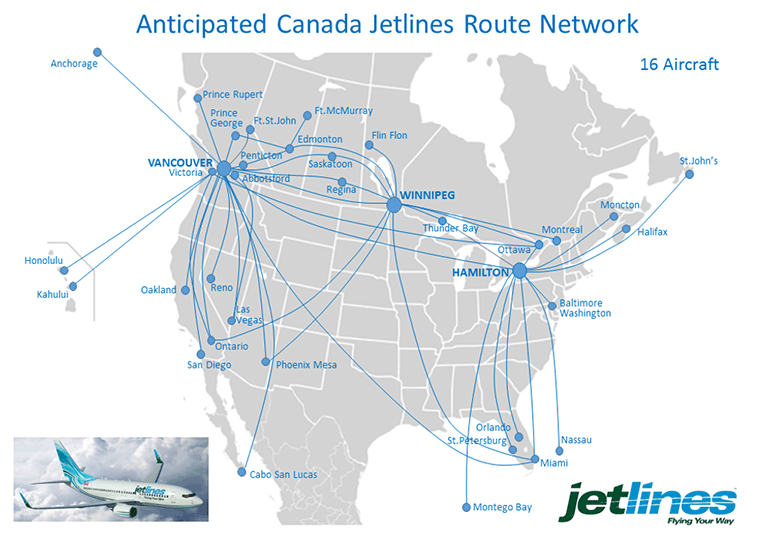 The US – Canada aviation market may soon be welcoming the carrier Jetlines. The planned ULCC has already revealed a map showing what its network could look like by the time it reaches a fleet size of 16 aircraft, with a part of it being focused on key leisure markets between the two nations.