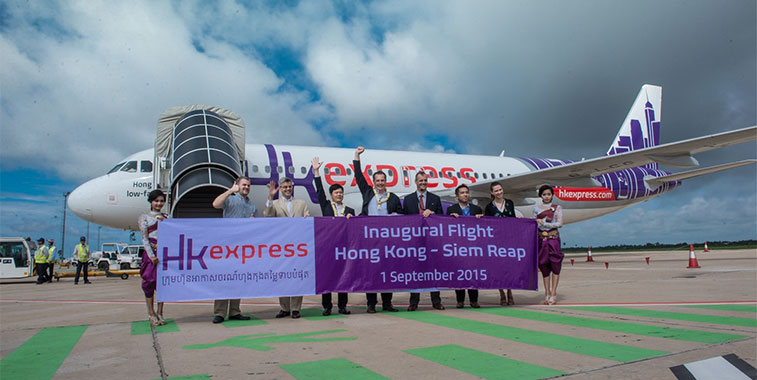 Around three-quarters the size of the UK and with a population of around 15.5 million, Cambodia is a country that has seen impressively consistent growth in recent years in its air travel market. Latest figures from Cambodia Airports (which runs the airports at Phnom Penh, Siem Reap and Sihanoukville) shows that just under 6.5 million passengers passed through the two main airports in 2015. This represents growth of 12.2% over the previous year and continues a run of double-digit growth that extends back to 2010. The global recession of 2008-09 impacted growth primarily at Siem Reap which acts as the gateway to the country’s most famous tourist attraction, the temples of Angkor Wat. Since 2009, traffic at Siem Reap has grown by 163% while passenger numbers serving the country’s capital at Phnom Penh have increased by 94%. 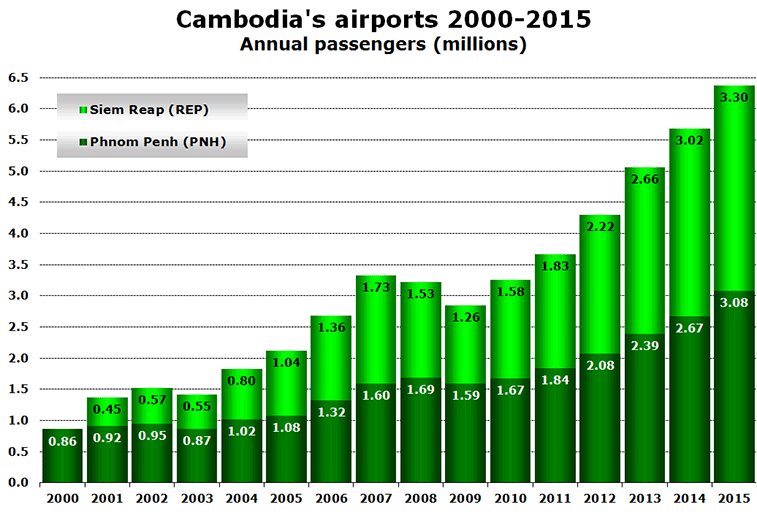 According to anna.aero’s Seasonal Variation in Demand (SVID) calculator Phnom Penh, scores an “excellent” 0.63, with monthly passengers in 2015 varying between 227,000 and 291,000. As a tourism destination, Siem Reap’s profile is more seasonal, with visitor demand higher during the dry season of December to April as opposed to the traditional rainy season from May to November. As a result, Siem Reap’s SVID score is 7.83 which ranks as “good”. Passenger numbers in January (around 400,000) are twice as high as in June (less than 200,000). 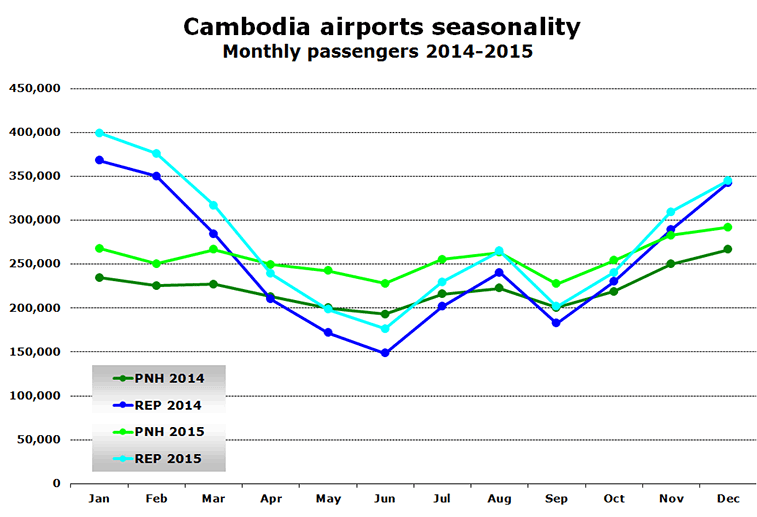 According to OAG Schedules Analyser for the current week and the comparable year in 2015, Thailand has overtaken Vietnam as the leading country market to/from Cambodia. At present a total of 12 country markets are served with non-stop flights. The only other change in the country rankings since last year has been that China has overtaken the Cambodian domestic market for third place. The longest route is currently Cambodia Angkor Air’s twice-weekly service to Shenyang in China, which clocks in at 3,668-kilometres. For international visitors from outside of the region the main ways to get to Cambodia appear to be via Bangkok, Hong Kong, Kuala Lumpur, Seoul Incheon and Singapore. 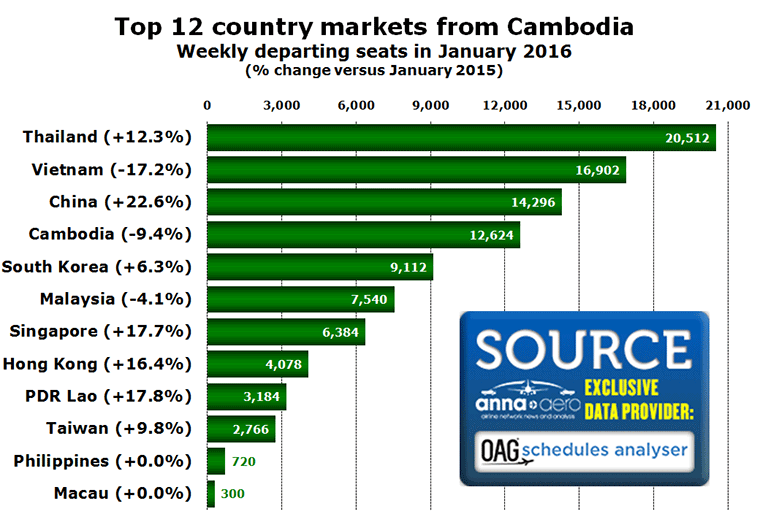 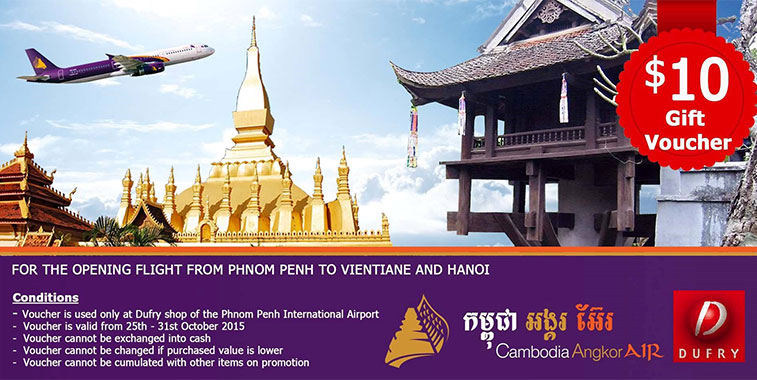 This week a total of 30 airlines are offering scheduled service to and from Siem Reap and Phnom Penh. Leading the way is local carrier Cambodia Angkor Air which operates some 150 weekly flights on a mix of domestic and international routes. The carrier serves Ho Chi Minh City in Vietnam with multiple daily flights from both Siem Reap and Phnom Penh as well as serving Bangkok, Seoul Incheon, Vientiane and several destinations in China. According to ch-aviation.ch the airline currently operates a fleet of three A321s and two ATR 72-500s, all of which are leased from Vietnam Airlines, which is a 49% shareholder in the carrier. Other, smaller, local carriers include Bassaka Air, Cambodia Bayon Airlines and Sky Angkor Airlines. However, none of these are big enough to rank among the country’s top 12 airlines. 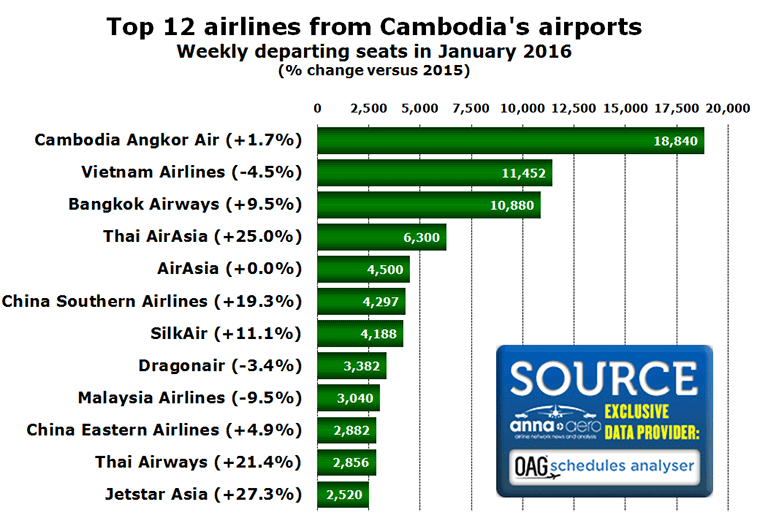 During the last 12 months Bangkok Airways has narrowed the gap on Vietnam Airlines in the battle to be the leading foreign carrier in Cambodia. Several carriers have increased their seat capacity in Cambodia by more than 10% though overall seat capacity is up just 3% compared with this time last year.

In the next few weeks at least two new routes are expected to launch. On 1 February THAI Smile will begin operating 10 times weekly from Bangkok Suvarnabhumi to Siem Reap, complementing Thai Airways’ daily flights from Bangkok Don Mueang to Phnom Penh. Then on 27 February Hong Kong Airlines will add a thrice weekly service from Hong Kong to Phnom Penh. Finally, Japanese news sources are indicating that All Nippon Airways may be planning a daily service to Phnom Penh from Tokyo Narita, using the Star Alliance carrier’s 787-8s, starting in September. 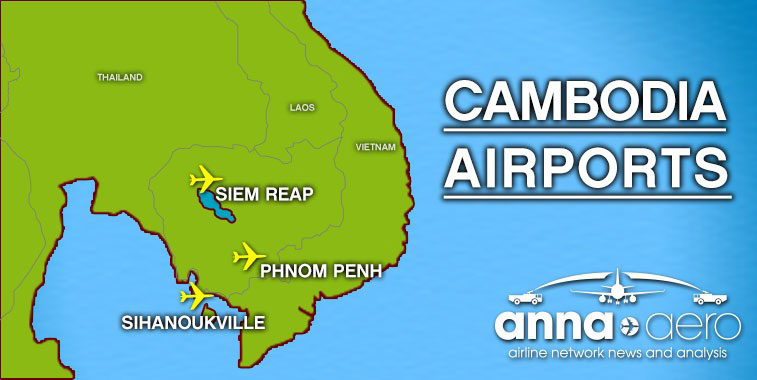 All three of Cambodia’s commercial airports are owned by Cambodia Airports in which France’s VINCI has a 70% share. The company has enjoyed double-digit growth for each of the last six years and in 2015 the airports handled close to 6.5 million passengers.