Traffic figures for 2015 confirmed that Istanbul Atatürk had overtaken Frankfurt to become Europe’s third busiest airport, with both airports passing the 60 million mark for the first time. With a government decision regarding future runway capacity still on-going in the UK, London Heathrow has still managed to maintain its position as Europe’s busiest airport, handling over 75 million passengers for the first time last year. This week, anna.aero is taking a look at Europe’s five leading hub airports – at Frankfurt, London, Amsterdam, Paris and Istanbul – which collectively we call the FLAPI airports. All of these airports handled over 55 million passengers in 2015 and are home hubs to airlines with global networks – Lufthansa, British Airways, KLM, Air France and Turkish Airlines respectively. 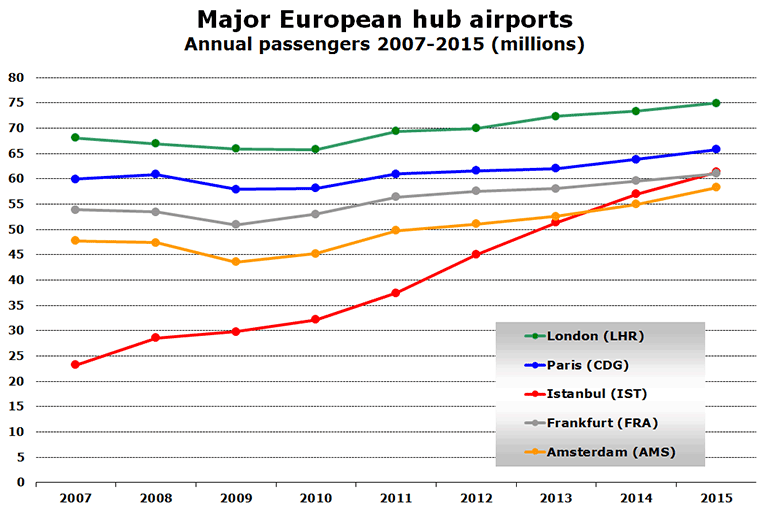 Apart from the rise of Istanbul, the other four airports have maintained their rankings relative to one another since 2007. Between 2007 and 2015, Istanbul has seen its passenger numbers grow by 164%, compared with Amsterdam 22%, Frankfurt 13% and London and Paris CDG both with 10%.

Paris has almost twice as many airlines as Istanbul

A look at the number of airlines operating at each of the FLAPI airports for the current winter season reveals that Paris CDG has broken through the 100-airline mark. Along with Amsterdam these two airports are the only ones among the five to have seen a year-on-year increase in the number of airlines in each of the last two winter seasons. Compared with W13/14 both London Heathrow and Istanbul Atatürk have seen a reduction in the number of scheduled carriers operating at the airport. 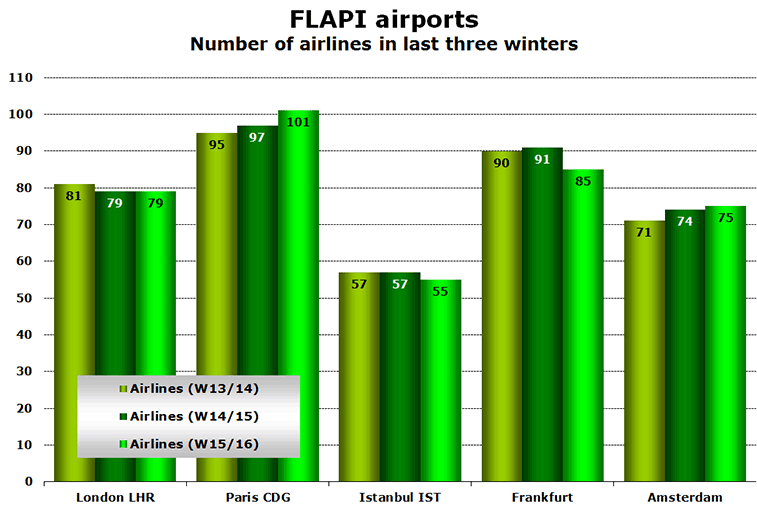 Remember, this is only looking at operations in winter. Some of the “gained” carriers may well have operated previously during the summer, while some “lost” carriers may have gone from year-round to summer-only operations. London Heathrow is the most stable of the airports. Its only losses were Transaero Airlines (which ceased all operations) and US Airways (which merged into American Airlines), while the only newcomers are Eurowings (which is the new name for Germanwings, though flights still operate under both 4U and EW codes) and Vietnam Airlines.

Amsterdam’s achievement in attracting Qatar Airways, Ryanair and Xiamen Airlines in the same 12-month period is impressive, though one of their gained carriers look a little odd. KLM CityHopper (IATA code WA) appears because of a weekly flight to nearby Rotterdam. Also, Transavia’s French operation is listed as a new carrier as it operates under a different IATA code (TO) from that of the Amsterdam-based Transavia, which operates under the IATA code HV.

The appearance of FlexFlight (IATA code W2) under the list of lost airlines at Amsterdam and Istanbul can be explained by the fact that the company was operating flights last winter on behalf of Zagrosjet to Erbil in Iraq. Zagrosjet continues to operate flights to Istanbul using its own IATA code, Z4, but does not serve Amsterdam at this time.

In terms of destinations served with non-stop flights, Istanbul passed Frankfurt last winter, but is now already 36 ahead with 262 compared with the German hub’s 226. Paris CDG is closing on Frankfurt, while Amsterdam saw the biggest year-on-year net increase (of five from 211 to 216) among the western European hubs. Despite being the busiest airport in terms of passenger numbers, Heathrow’s route count of just 160 non-stop destinations served means it now lags Istanbul’s main hub by more than 100. 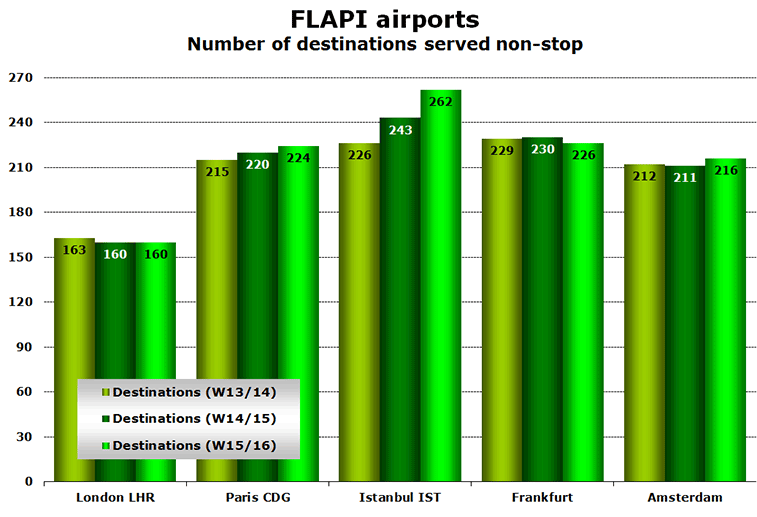 Has any other airport welcomed both Ryanair and Qatar Airways in the same year? Because that’s what Amsterdam Airport Schiphol managed in 2015. As a result the Dutch hub now serves 75 scheduled airlines this winter, a net gain of one over last winter.