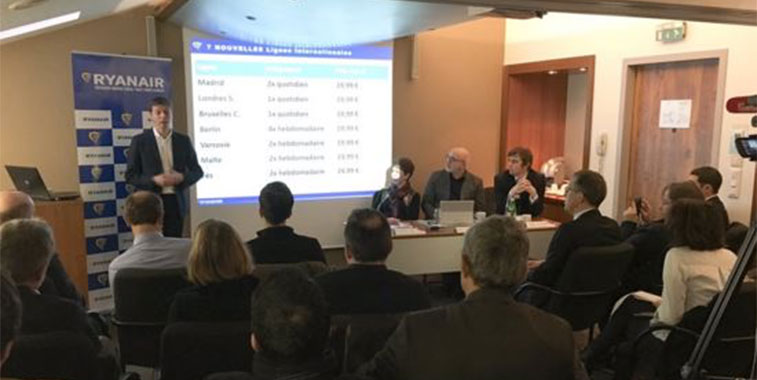 This rather low-res image is the best that Ryanair could find to send us from the press conference in the French city on Tuesday, when the ULCC announced its first ever routes to the airport starting in November. We’re pretty sure that one of the people sitting at the desk is David O’Brien, Ryanair’s CCO.

Ryanair has operated to more than 30 French airports over the years, but it has never served the country’s sixth busiest airport in Toulouse. That is all set to change at the start of November when the Irish ULCC will launch flights from seven of its bases to the airport. Of the seven routes only two serve cities not already served from Toulouse, namely Malta and Warsaw. Both of these new routes will only be served twice-weekly. Ryanair will operate a total of 38 weekly flights including double-daily flights to Madrid (competing with Iberia) and daily flights to Brussels Charleroi and London Stansted. Interestingly, easyJet’s service to Berlin Schönefeld also begins this summer, on 10 May to be precise.

easyJet has served Toulouse since July 2003 when it launched service from Paris Orly. London Gatwick flights were added later the same year followed by Bristol in 2006 and Madrid in 2007. Toulouse became a base for the airline in March 2012 and last summer operated to 20 destinations, with several new destinations planned for this summer. 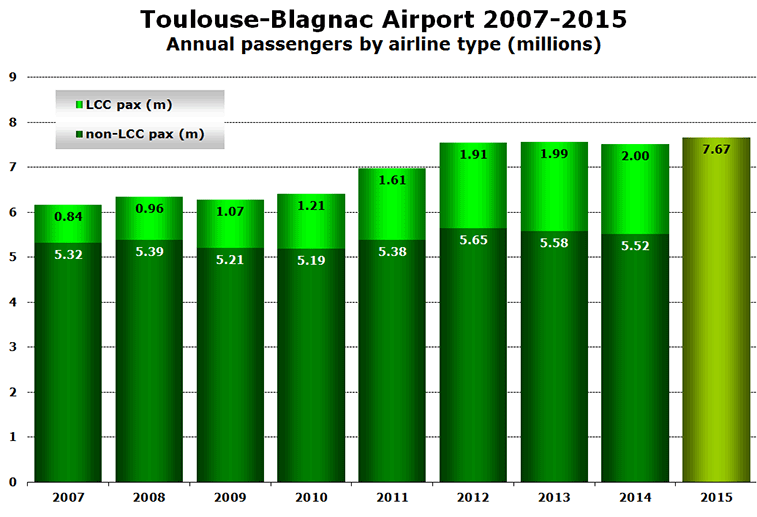 Source: UAF.  Figures for 2015 are not broken down by airline type.

Other LCCs operating at Toulouse include Air Arabia Maroc, Jet2.com and Volotea. Neither Norwegian nor Wizz Air are present at the airport, while Transavia is also noticeably absent. Ryanair predicts that its new services will carry 600,000 passengers which would represent an increase in LCC passengers of 30%, based on 2014 figures.