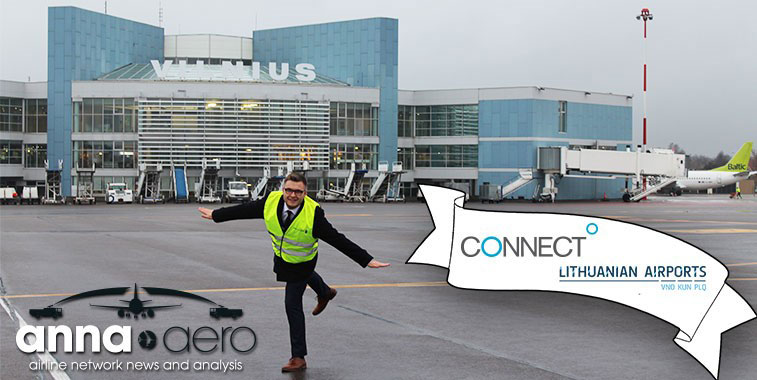 Taking place between 13-15 March, with a full day of excursions planned the day before the conference starts, CONNECT 2016 will be welcoming 50 airlines and 150 airports to the Lithuanian capital. The host of this year’s conference is Lithuanian Airports, which recently has welcomed a host of new route announcements from the likes of airBaltic, Wizz Air and Ryanair, airlines which will be attending the conference, with the former being the host carrier.

Vilnius, the capital of Lithuania, is home to approximately 540,000 people and is the second largest city in the Baltic region after Riga. The city is famous for numerous things, especially its Old Town, which was made a UNESCO (United Nations Educational, Scientific and Cultural Organization) world heritage site in 1994. But not only is Vilnius known for this, but also for the fact that it will be the host destination for CONNECT 2016, a conference which provides a unique and independent forum for airlines, airports and suppliers from across Europe to meet in a relaxed and productive setting.

Hosted this year by Lithuanian Airports, which runs Vilnius, Kaunas and Palanga airports, the conference will take place between 13 – 15 March at the National Gallery of Art in the country’s capital city. 2016 is looking to be a very promising year for the airport group, with airlines including Wizz Air and Ryanair announcing new services to all three of Lithuania’s airports. Palanga and Kaunas will be better connected to the UK capital with services to London Luton being launched by Wizz Air, the carrier’s first services to both airports in Lithuania. Ryanair will also connect Palanga to the UK city with a London Stansted service, while LOT Polish Airlines will commence services to Palanga from Warsaw Chopin, and the Belarusian capital of Minsk will also be connected to Lithuania’s north-east facility by Belavia, which will launch a seasonal service in June.

For Vilnius, the biggest announcement so far for 2016 is the news that Vueling will offer a link to Barcelona from 28 June, opening connections to multiple destinations across southern Europe through its largest hub. Ryanair will also add Birmingham and London Luton to its existing route portfolio from Vilnius, while CONNECT host carrier airBaltic (which recently met with anna.aero) will link the important Baltic capitals of Vilnius and Tallinn from 17 April. anna.aero’s Assistant Editor, Jonathan Ford, recently met with Lithuanian Airports CCO, Jūratė Baltrušaitytė (who will speak at this year’s conference) in Vilnius, to discuss how aviation has changed recently within the country, and how it’s developing a strategy to evenly spread capacity across its three commercial airports. 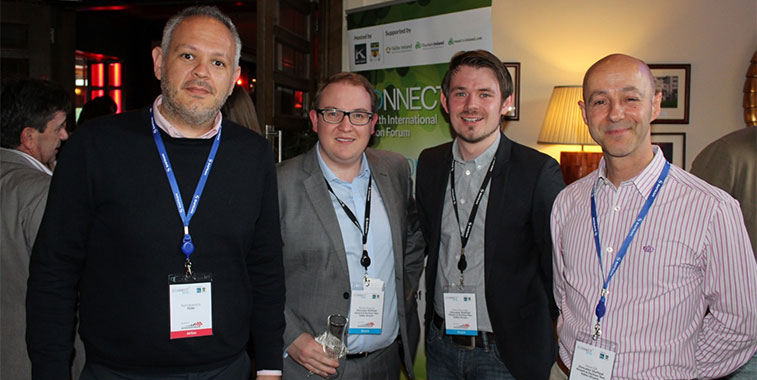 Attending CONNECT results in successful business! Paris Anatolitis, former Director of Route Performance, Flybe (now Head of Product Marketing at GVC Holdings), is seen meeting with Doncaster Sheffield and Durham Tees Valley airports’ Declan Maguire, Aviation Development Manager; Chris Harcombe, Head of Aviation Development; and Steve Gill, Managing Director, Doncaster Sheffield. Discussions on this evening must have been successful as since CONNECT 2015 flybe has announced a two E195-base at Doncaster Sheffield, opening up eight routes to Paris CDG, Amsterdam, Berlin Tegel, Jersey, Newquay, Malaga, Alicante and Faro. If your airport is after these type of results, then CONNECT shows that it is the place to be.

28 guest speakers are so far confirmed to take part in this year’s programme, with delegates such as David O’Brien, CCO, Ryanair, and Martin Gauss, CEO airBaltic taking part in proceedings. Discussion seminars that will be taking place at CONNECT this year include: the strategic outlook for 2016; setting the scene – the European aviation market (conducted by anna.aero’s very own Ralph Anker); the evolution of the charter airline; Spanish market focus; the value of carbon neutrality – the impact on airlines & airports; and key drivers of route development. The table below shows further details of this year’s speakers and panel discussion participants.

Once again anna.aero’s very own Chief Analyst, Ralph Anker, will deliver a keynote speech with his defining analysis: “Setting the Scene : The European Aviation Market”. Anker will also be interviewing Ryanair’s CCO, David O’Brien. Ryanair has a major presence in the Baltic market, so Anker will go head-to-head with O’Brien to discuss the following questions: What the carrier perceives as the opportunities and threats to future growth in the region? How are the Baltic markets different from those in other parts of Europe? And how is Ryanair’s focus on bigger airports / markets going? Anker will also go head-to-head with airBaltic CEO, Martin Gauss, asking: Can airBaltic develop into the de facto national carriers for the Baltic States? What are the strengths and weaknesses of the Baltic market from airBaltic’s perspective? How is airBaltic dealing with the threat of LCCs in the Baltic market? And how important is co-operation with other airlines for airBaltic? Not only will Anker be taking part in panel discussion, he will also be part of the anna.aero team which will be producing editions of the much-loved anna.aero on-site show daily magazines.

What to expect from Vilnius

On the day before the conference commences, a series of tours have been set up for delegates to sign up to and enjoy before the meetings, networking and seminars commence. This year’s delegates can expect to go on a Vilnius city tour, which will include visits to: the church of St. Peter and St. Paul – a Baroque pearl; the lower castle territory; the Cathedral; the University of Vilnius – the oldest in Lithuania; the Church of St. Ann – a Gothic monument; Amber Gallery Museum; Užupis – a “republic” of artists and it is sometimes compared to Montmartre in Paris or Christiania in Copenhagen; Subačius Panoramic Hill; Gates of Dawn; and the Town Hall Square. There will also be a visit to Trakai & Užutrakis. The ancient capital of Lithuania, Trakai, is one of the oldest Lithuanian settlements, famous for its gothic castles and is included in the list of top 10 world’s most amazing ancient villages and towns. Finally there will also be a Vilnius Stikliai Street tour with beer tasting. Sign up for tours now at this link.

A series of city runs and yoga sessions have been slotted into the event’s proceedings for delegates to enjoy and ready themselves for a full day of activities. A welcome reception, hosted by Lithuanian Airports will take place at 19:00 at the Palace of the Grand Dukes of Lithuania on 13 March, while the following evening there will be a gastronomic gala dinner with Lithuanian’s top famous chefs preparing an exquisite dinner for all delegates. After the gala dinner, a private drinks reception will also take place at the city’s Skybar, situated in the Radisson Blu Hotel. Back to the important business, meetings will be taking place throughout the conference, with two dedicated lounges, one for airlines – where airports and suppliers can discuss future strategy with commercial and route development decision makers from Europe’s leading airlines. The other lounge is dedicated for airports – a space for airports, suppliers and consultants to meet and build relationships for stronger growth and partnerships.

If you still need to sign up for this year’s conference, you can do so using this link. anna.aero takes charge. Ralph Anker, Chief Analyst, anna.aero, will once again be moderating at CONNECT. He will also be giving a keynote talk where he will set the scene of what is happening in the European aviation market, as well as conducting head-to-head talks with Martin Gauss, CEO, airBaltic, and David O’Brien, CCO, Ryanair. Finally, he will also moderate a roundtable discussion on the challenges and opportunities in the Baltic Region, with the panel being made up of Gauss, as well as Gediminas Almantas, CEO, Lithuanian Airports; Erik Sakkov, Member of the Management Board, Nordic Aviation Group; and Ryan DeBrusk, VP Sales Europe, Russia & CIS, Bombardier Commercial Aircraft.