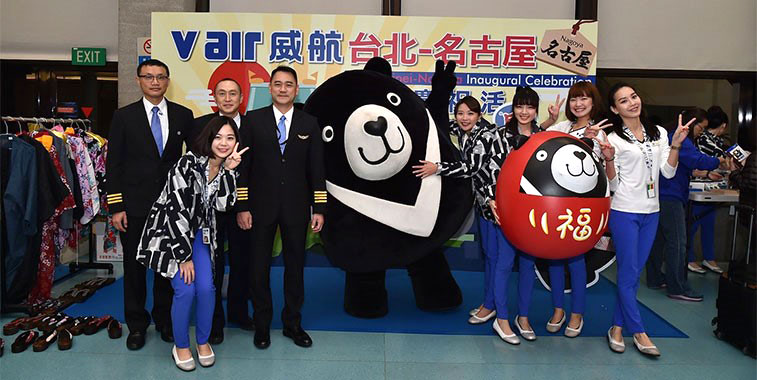 V Air Bear was clearly happy about the airline’s new service from Taipei Taoyuan to Nagoya on 15 December. The Taiwanese LCC was one of seven new airlines to start services to the Japanese airport over the last 12 months.

Japan’s eighth largest airport (in terms of one-way total seats for 2015 from OAG data), Nagoya is seemingly on the brink of substantial traffic growth again, fuelled by a Chinese airline and new route explosion. The airport’s roll-call of scheduled airlines has improved dramatically over the last 12 months, growing from 27 last January to 33 this year. This follows the introduction of services from AirDo, Juneyao Airlines, Shenzhen Airlines, Solaseed Air, Spring Airlines, Tigerair Taiwan and V Air, but also the withdrawal of AirAsia X. The story is the same in terms of the airport’s network of served scheduled non-stop destinations, which has grown by a net of nine, with 11 new city pairs now on offer, all of which are in China – Guangzhou, Changchun, Changsha, Changzhou, Hefei, Harbin, Guiyang, Ningbo, Nantong, Wuhan and Yantai – but also with the loss of connections to Seoul Gimpo and Kuala Lumpur. 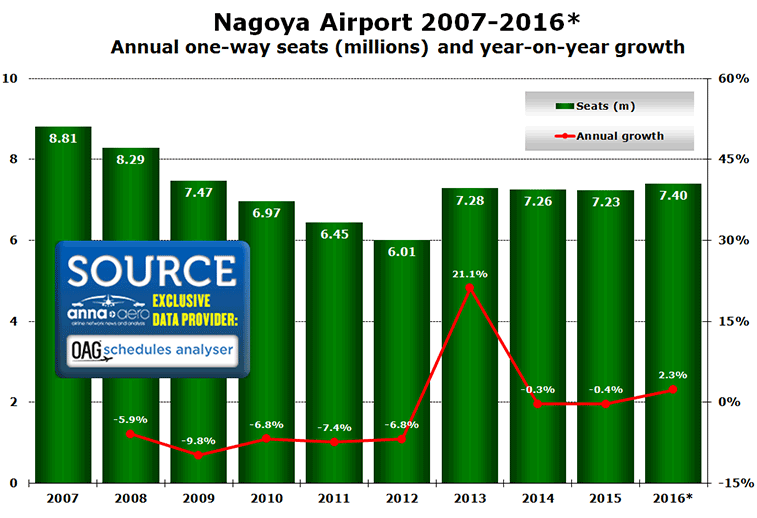 In the absence of reliable annual passenger traffic data, and therefore looking at the airport’s annual seat capacity between 2007 and 2016, Nagoya could deliver a seven-year high in terms of this metric this year, although this seat volume figure could well change up or down as 2016 progresses. The renaissance in the airport’s fortunes in 2013, after five years of capacity declines, can be in part laid at the door of Jetstar Japan, which arrived at Nagoya in that year, launching services to Fukuoka, Sapporo Chitose, Kagoshima and Tokyo Narita (according to OAG data). The LCC is now the airport’s third most important carriers in terms of weekly seats.

A year ago, Spring Airlines had no services operating into Nagoya. Now 12 months on, having launched routes from Changzhou, Guiyang, Harbin, Hefei, Ningbo and Shanghai Pudong, the Chinese LCC is now the airport’s eighth largest airline. Another newcomer to the top 12 is AirDo, which operates in cooperation with All Nippon Airways (ANA). Presumably its arrival at the airport at least partially explains the 12% decline in ANA’s weekly capacity year-on-year. Overall weekly seats at Nagoya have grown by 7.5% since last January. International carriers (highlighted in light green) are well-represented inside the top 12, with half of the airport’s biggest airlines coming from overseas. 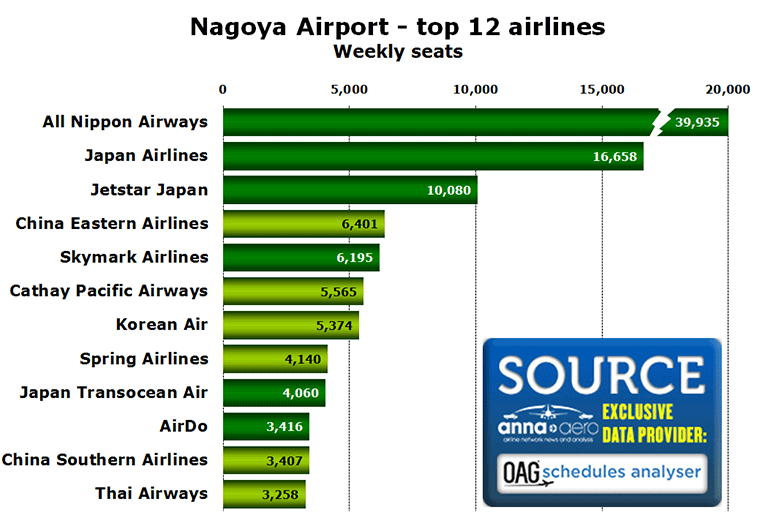 While #1 carrier ANA’s capacity reduction is the biggest of those witnessed over the last 12 months, the Star Alliance carrier is not alone inside the top 12 in culling weekly seats, with Japan Airlines (-5.1%) and its affiliate airline Japan Transocean Air (-0.9%) both also guilty. Aside from the two newcomers, China Southern Airlines, which was the 18th largest carrier in January 2015, is now Nagoya’s 11th biggest, courtesy of new routes to Guangzhou, Wuhan and Changchun and increased capacity on its existing Shenyang service, which resulted in an 85% hike in its weekly seats.

Nagoya currently has a network of 51 non-stop scheduled routes, with its top 12 routes commanding 70% of all weekly capacity, up from 66% a year ago. Similar to the top 12 airlines, the top 12 routes is not dominated by domestic services, with international services (highlighted in light green) peppering Nagoya’s biggest city pairs. Indeed, the fastest growing city pair in the last 12 months was the international sector to Hong Kong, which grew by 44% year-on-year, thanks to extra seats being added by incumbents Cathay Pacific Airways and HK Express. Capacity to Shanghai Pudong was the second fastest growing airport pair at Nagoya, with a very respectable 35% increase since last January. 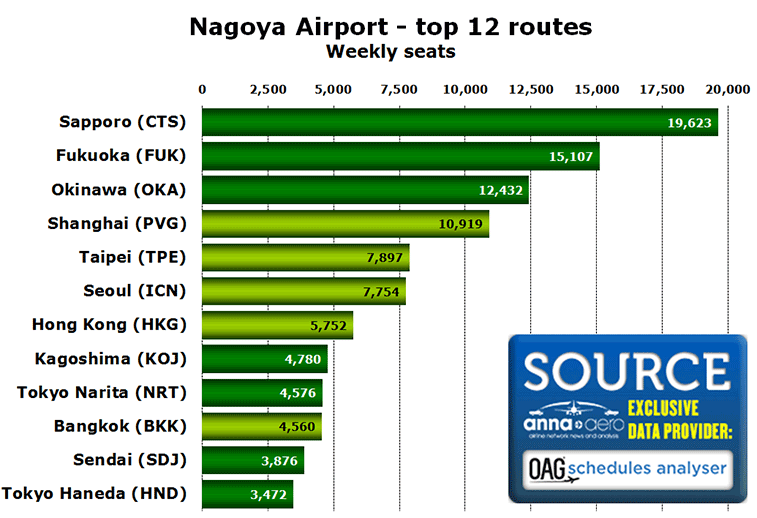 By contrast, the two routes which have endured the biggest annual cut in weekly seats are both domestic sectors, with a 25% reduction in volumes to Kagoshima and an 11% fall to Tokyo Narita. It is not all doom and gloom in the Japanese market however, as the #1 and #2 routes in terms of weekly seats, Sapporo Chitose (+15%) and Fukuoka (+33%), both posted some impressive growth statistics.

Looking ahead for the remainder of the year, and consulting anna.aero’s New Route Database, there could be more growth to China from Nagoya. China Eastern Airlines is mooted to be interested in adding services from Chongqing (via Hefei) and Hangzhou in March. In addition, Jetstar Japan has pencilled in 1 April to launch a four times weekly services to Manila, providing competition to existing carriers Philippine Airlines and Cebu Pacific Air. 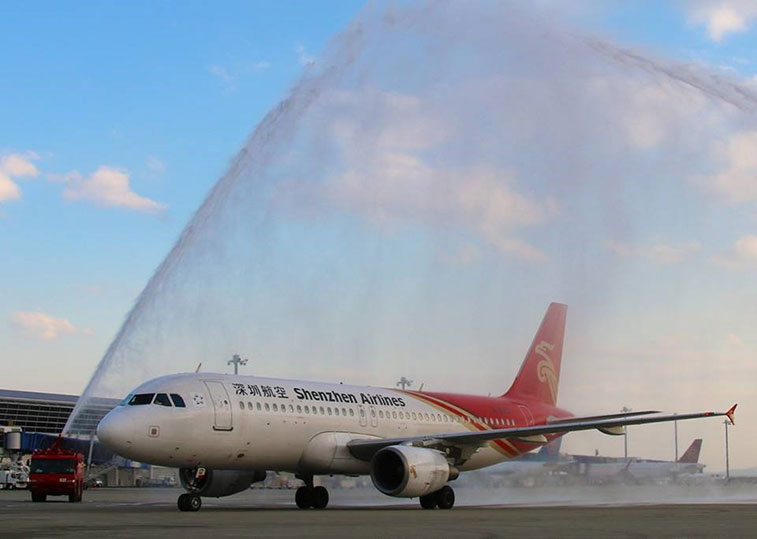 Launched on 26 January, Shenzhen Airlines started twice-weekly services from Nantong to Nagoya. Tigerair Taiwan also started flights to the Japanese airport on 29 January. The new Chinese route was one of 11 new city pairs commenced in the last 12 months from the country. The airport only netted nine routes in that period however, as it also lost service to Seoul Gimpo and Kuala Lumpur.