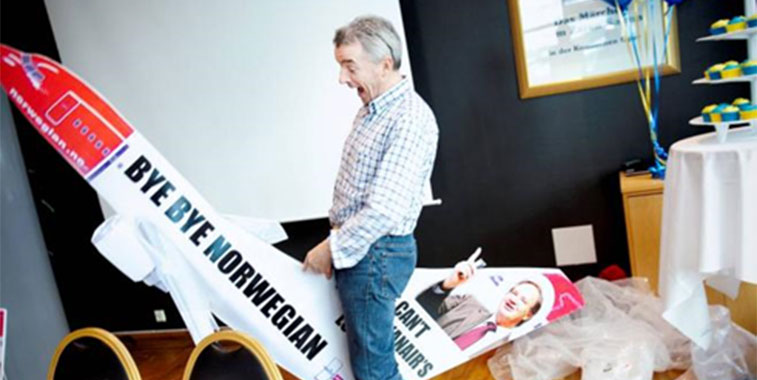 Is the ‘old’ Ryanair starting to come back into the ‘new’ Ryanair model? It was recently revealed by various sources that the Irish ULCC (which already operates to Oslo’s Rygge and Torp airports) has been granted four daily slots at Oslo’s Gardermoen Airport for a thrice-daily service to London Stansted and a daily route to Vilnius. Norway’s largest airport is currently the largest base for Norwegian, Europe’s third largest LCC. With Ryanair looking at gaining access to the facility, which witnessed 1.6% traffic growth during 2016, Gardermoen could be the future setting for one of Europe’s biggest market share battles.

Nestled in the western part of Scandinavia, Norway shares a 1,619-kilometre border with Sweden, as well as a 727- and 196-kilometre border with Finland and Russia respectively. The nation has a coastline that stretches for 25,000 kilometres (including its islands and fjords), and coincidentally it is also the longest country in Europe from its northern to southern border. 2016 estimates suggest that Norway has an overall population of 5.2 million (based on Statistics Norway figures), while a projected look towards 2060 expects the population to rise to just over seven million. Of Norway’s 5.2 million inhabitants, 650,000 live in Oslo. If you take into account the metropolitan area, the population in and around Oslo is 1.7 million. Looking at the country’s aviation structure, an interesting anecdote from Norway’s aviation factoids is that it is has Europe’s longest domestic country link, a 2,012-kilometre sector between Oslo Gardermoen and Longyearbyen on Svalbard, a Norwegian island in the Arctic Ocean. Over the past 12 months, total passenger traffic has declined by 0.5 million passengers, however airline capacity for this winter is up 1.0% despite the reduced traffic figures. 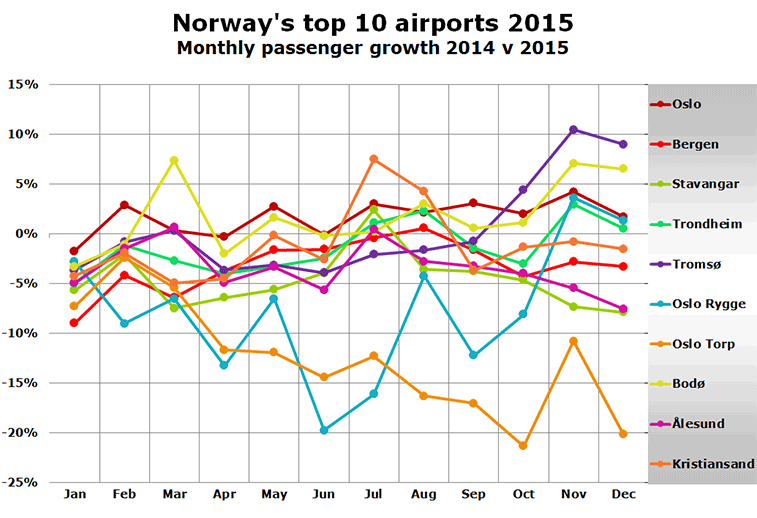 Only half of Norway’s airports declare growth for 2015

Out of Norway’s top 10 airports only three have recorded growth for 2015, Gardermoen (1.6%), Tromsø (0.3%) and Bodø (1.7%). For the airports in Norway which anna.aero has collected passenger data on, the one that has recorded the best growth in traffic for last year was Molde (13th busiest airport), up 6.7%. It was also the only airport in Norway to record growth in each month during 2015. Overall for all of Norway, passenger traffic is down by 0.5 million when compared to the total of 2014. In total for 2015, 53.9 million passengers travelled through Norway’s biggest airports (those with over 100,000 passengers per annum), with 47% of those passengers travelling through the country’s number one airport, Gardermoen. 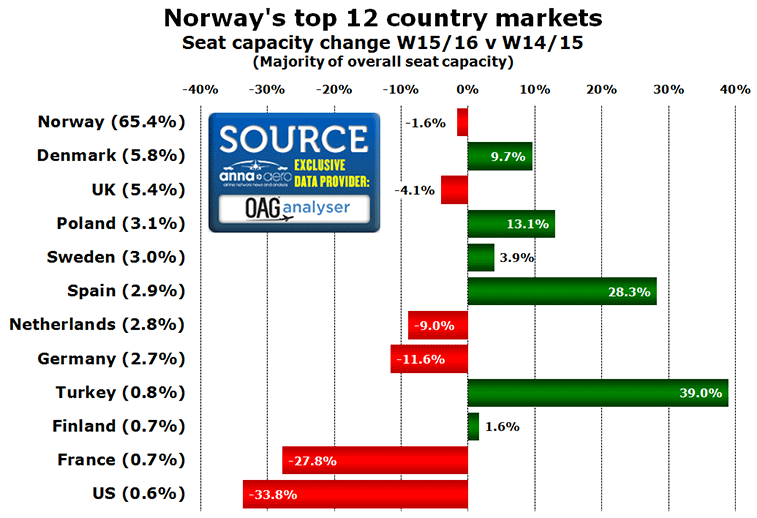 Norway’s domestic market is most dominant

Even with Norway’s domestic market recording a decline over the past 12 months of 1.6%, it still holds a 65% majority of overall seat capacity. One of the biggest shifts in the Norwegian market is the UK dropping from being the second largest country market last year to third this year, a result which has occurred due to Denmark (third last year) achieving a growth in capacity of 9.7%. Another reason for the decline in UK capacity is Flybe ending its daily service from Gardermoen to Birmingham at the end of W14/15. Out of Norway’s 38 country connections, of which four are new (Puerto Rico: 34th largest market; Macedonia: 35th; Egypt: 36th; and Bosnia and Herzegovina: 38th), 12 are reporting a downturn in capacity. The most significant reduction is the US (12th) which is down just under 34%, while outside of the top 12 the biggest decline in seat capacity is Ireland (26th), down 21%. At the other end of the spectrum, one country market to record growth is the Czech Republic (25th), which is up 44% when compared to the same time period of 2015. 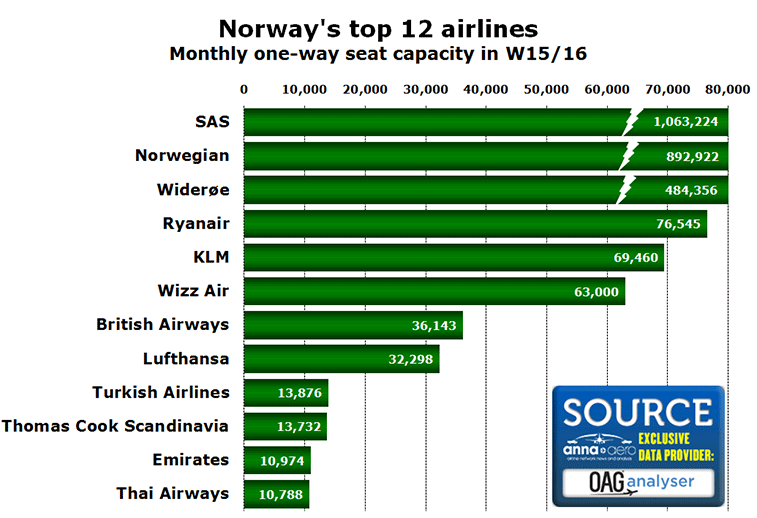 After recording a growth in seat capacity over the past 12 months of over 19%, Wizz Air recorded the best growth in Norway’s LCC market. Norwegian and Ryanair (second and fourth largest carriers) each recorded declines during 2015, with the former showing a drop of 1.3%, while Europe’s biggest airline cut its available capacity by 8.6%. In regards to Norway’s national and number one carrier SAS, it is showing a rise in its available seat capacity of 1.6% or approximately 20,000 seats. However, the biggest growth from Norway’s top 12 carriers comes from Turkish Airlines, which is recording a growth of nearly 25% when compared to the same time period of last year. Outside of the top 12, the biggest recorded increase in seats is from TAP Portugal (20th largest carrier) which is recording a growth of nearly 17%. Elsewhere, Finnair, Icelandair and airBaltic are all recording declines in capacity (-9.2%; -2.3%; and -2.3%), indicating that intra-Scandinavian traffic is a market which is witnessing a drop in demand. However, despite the reduced passenger traffic and a number of Norway’s key airlines showing drops in capacity, the amount of available seats this winter is still up 1.0%.

At the start of 2016, various sources indicated that Nordic Airport Coordinators, the entity responsible for the allocation of slots at airports in Scandinavia, has awarded four daily slots to Ryanair at Gardermoen. For the Irish ULCC, this would mean it is entering its third Oslo airport after Rygge and Torp airports. If the slots that Ryanair have been granted come to fruition, it would mean that it competes against Norwegian at all three of Oslo’s airports. Currently Ryanair has been awarded slots to operate a thrice-daily London Stansted service and a daily Vilnius operation. If the ULCC does confirm to the slots, then the routes could be operational as soon as the end of March. Looking at the month of April, SAS will be operating 32 weekly flights into London Heathrow, while British Airways will be operating 31 weekly flights to the same airport. Norwegian would also be offering in-direct competition to the UK capital in the form of 20 weekly flights to London Gatwick. Ryanair already serves Rygge and Torp from Stansted. With regards to Vilnius, which is already offered from the Norwegian capital from Rygge by Ryanair, it would face direct competition from SAS (four weekly flights) and airBaltic (thrice-weekly). Wizz Air also connects the two capitals with thrice-weekly services to Torp. 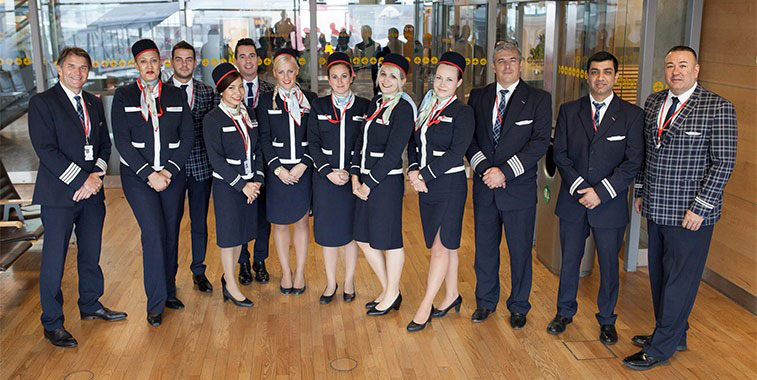 On 1 November Norwegian commenced weekly flights between Oslo Gardermoen and San Juan in Puerto Rico. The LCC has recorded a decline in seat capacity from Norway of 1.3% over the past 12 months, while Puerto Rico becomes the 38th country market to be served directly from Norway.