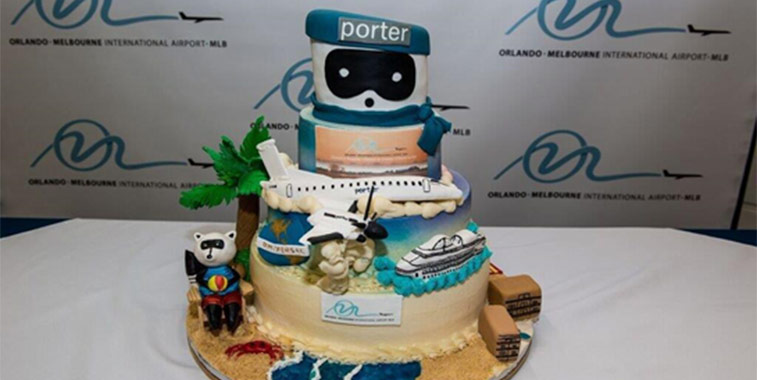 On 19 December, Melbourne (Florida) became Porter Airlines’ ninth international destination from its Toronto City base. The weekly (Saturday) service is flown by the carrier’s Q400 fleet, of which it has 26. This winter, US seat capacity is up 2% from 13% last winter to 15% this winter, showcasing the airline’s growth in its only international market.

Founded on 2 February 2006, Porter Airlines has grown to become Canada’s third largest airline with regards to weekly departing seats (based on OAG Schedules Analyser data for February 2016), with Air Canada and WestJet being ahead of the regional carrier. According to the website CH Aviation, Porter’s fleet consists of 26 Q400s, with an average fleet age of 6.8 years. Last year, the airline introduced services to the following airports: Charleston, Pittsburgh and Melbourne in the US, and North Bay in Canada. Of the two county markets that Porter serves, Canada and the US, the current split in seat capacity between the two nations is 85% to 15%, highlighting the significance of the Canadian domestic market to the carrier. However, the Canadian market share has reduced by 2% when compared to the same time period of 2014 (87%), highlighting the development of the carrier’s growth in the US. 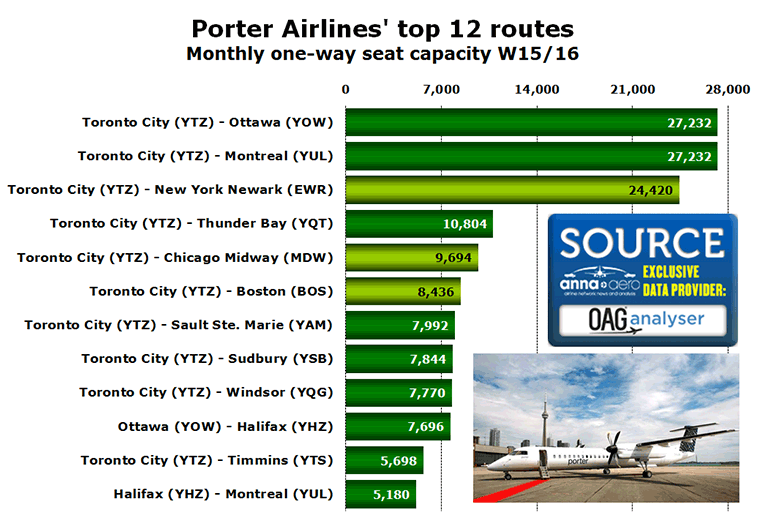 First ever route is still number one

Of Porter’s top 12 routes, 10 originate from its Toronto City hub. Three routes (highlighted in light green) are to the airlines only international market, the US, a nation where Porter serves nine destinations. As well as the three US routes in the top 12, the carrier also serves Burlington, Washington Dulles, Pittsburgh, Myrtle Beach, Charleston and Melbourne (Florida). The regional carrier’s top two routes, Toronto City to Ottawa and Montreal, were the first sectors to be served by the airline, with the former launched on 23 October 2006, while the latter started on 11 December of the same year. The airport pair of Toronto City to Montreal is coincidentally the only route from the Toronto hub in which Porter faces direct competition, with Air Canada Express also offering a multiple daily Q400 frequency. The Star Alliance member re-introduced this service in 2009 in order to compete with Porter. It is worth noting though that Air Canada does offer strong competition on services to a majority of Porter’s destinations via its Toronto Pearson base. 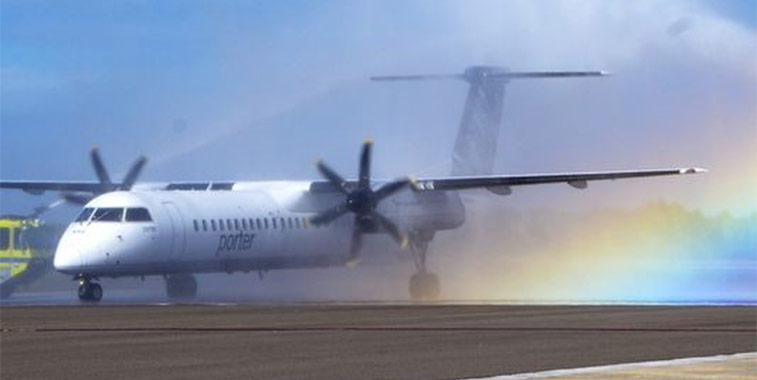 On 21 December, Porter Airlines commenced its latest service from Toronto City Airport to Melbourne (Florida), with the latter greeting the first flight with a traditional water arch salute. The Floridian gateway becomes Porter’s ninth US route and also becomes the longest sector for the carrier at 1,727-kilometres. Porter currently operates the city pair with a weekly (Saturday) flight. 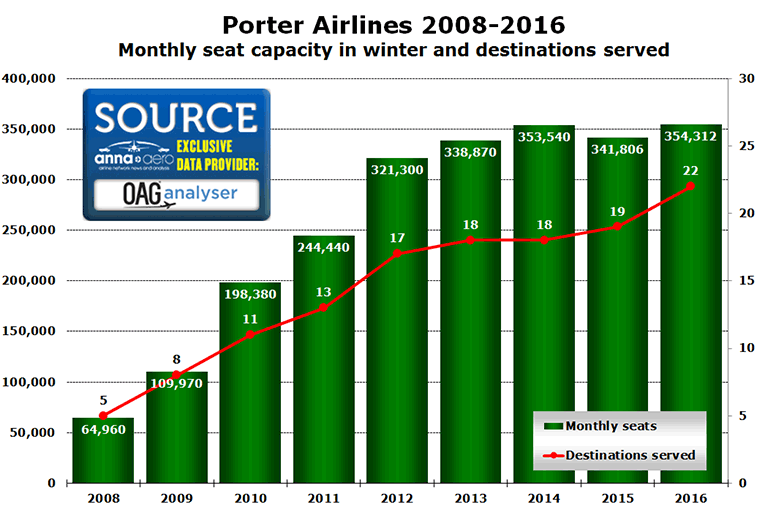 Only one year of decline; over 20 destinations served

Porter commenced its first service on 23 October 2006 between Toronto City and Ottawa, initially with 10 daily services Monday to Friday with two each on Saturdays and Sundays. In W15/16, the airline is now offering up to 14 daily flights on its inaugural city pair, with 85 weekly flights in total based on OAG Schedules Analyser data for the week commencing 2 February. International services by the carrier commenced on 31 March 2008, with a seven times daily operation to New York Newark from its main base at Toronto City. Since 2008 (Porter 2006/07 data unavailable in OAG), the number of destinations served by the airline has grown from five to 22. Currently the carrier has no new routes planned for 2016 based on anna.aero’s New Route Database.

During the past decade (for which data is available), Porter has only encountered one year of reduced capacity, with seat availability for W14/15 being 3.4% less than what was on offer by the carrier during W13/14. The biggest growth by the carrier was seen between 2009 and 2013, when the airline witnessed an average annual increase in capacity during this period of 32%, with the best performing year being 2010 (45%). By comparison, between W12/13 and W15/16 the average yearly increase in seat capacity was just 2.4%. If this increase is continued into the W16/17 season, then Porter will be offering over 362,000 seats, a rise of over 8,000 seats compared to W15/16.

In November, a decision on the expansion of Toronto City left the potential future strategy of Porter in limbo when it was decided that a runway extension would not be going ahead. Around two years ago, the airline announced its ambitious plans to expand from the airport, which also involved the incorporation of the Bombardier C Series into its fleet to allow the Porter to open up new routes to the west of North America. The regional carrier had placed a conditional order for up to 30 of the type, a deal which would have been worth two billion USD, on the proviso that the runway at Toronto City would be extended by 300m at each end to accommodate the new aircraft.

Also in November, new Canadian Transport Minister, Marc Garneau, announced via a tweet that Ottawa (home of the Canadian government) will not re-open the tripartite agreement that currently bans jets from flying out of Toronto City. The decision was made before various studies, including an environmental assessment of the proposal, had been completed. With this decision, it leaves Porter’s growth plans on hold, limiting its aircraft options to the Q400 it has in its fleet and effectively restricting the range of destinations where the airline could serve next. It means that Porter is limited to routes on the Eastern Seaboard and central Canada and US. Porter Airlines route map 2016 versus proposed expansion map. In 2015, Porter commenced services to Melbourne (Florida), North Bay, Pittsburgh and Charleston. For 2016, no new routes are currently planned. The second map is Porter’s proposed new routes from Toronto City, designed at the time in which it had confirmed its intention to pursue the Bombardier C Series if expansion at its main base had been approved. Now that this expansion has not been granted, the regional carrier must re-invent its future strategy for growth, with its current fleet limiting its potential destinations to the east coast and central US and Canada.