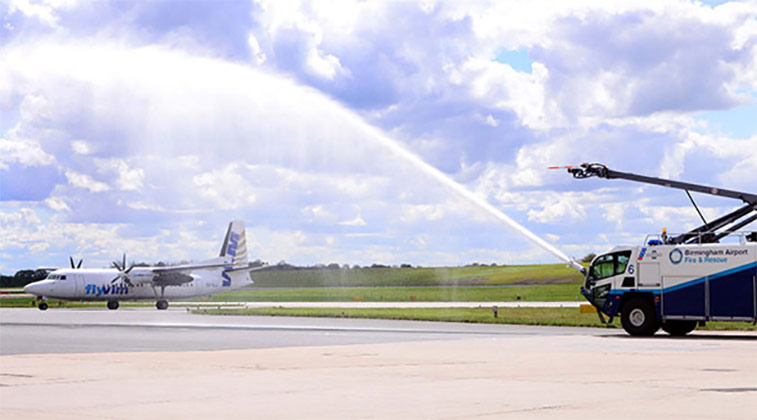 On 27 April 2015, VLM Airlines became the sixth carrier in the UK-Ireland market when it commenced 12 weekly services to London Luton and a four times weekly flight to Birmingham from its Waterford base, with the latter of the two UK airports greeting the first flight with a traditional water arch salute. With the market being so dominated by Ryanair and Aer Lingus, it’s of no surprise to see that VLM only commands 0.4% of monthly seats between the UK and Ireland this winter.

The UK to Ireland is one of the busiest country markets in the world. The seat capacity between the two has grown by 12% over the past 12 months, with 100,000 more one-way seats available between the two since 2011. This represents an increase over the past six years of 16%, showcasing the strong growth that has happened in just the past year. With this in mind, anna.aero thought it to be a good idea to look further into how the country pair has shaped up during the past few years, especially considering the market has lost seven carriers in the past six years. 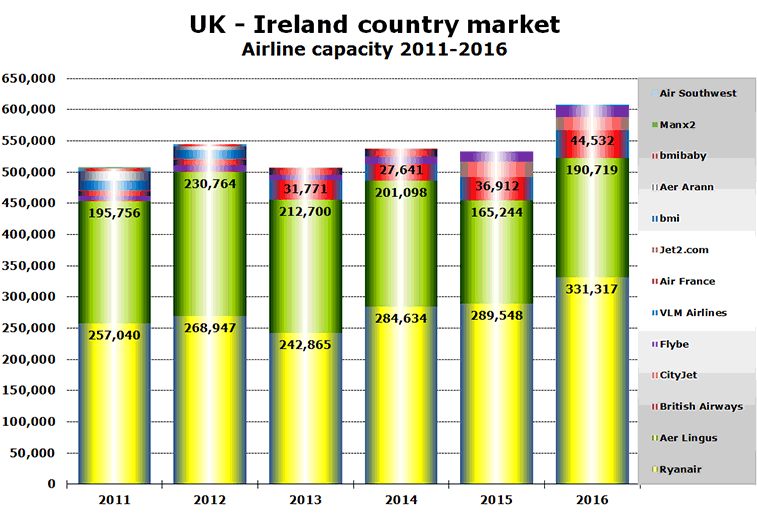 After recording a growth in seat capacity between the UK and Ireland of just under 13%, ULCC Ryanair is still the number one carrier in the market. In total, the airline operates 24 routes between the two nations, with its number one being London Stansted – Dublin, a sector which commands 13% of the airline’s overall capacity between the UK and Ireland. Although Ryanair has once again maintained its leading position in the market, British Airways has recorded the biggest growth at 17% on its services between London Heathrow and Dublin, the largest airport pair in the market. The other carrier to grow more than Ryanair was Aer Lingus at just over 13%, with its Aer Lingus Regional division opening services to East Midlands, Doncaster Sheffield, and Newquay from Dublin, while it also took over the Public Service Obligation (PSO) route between Donegal and Glasgow. The growth of Aer Lingus and its further development of its Dublin hub as a pre-clearance facility for UK passengers to the US may also strengthen now that it is part of the IAG Group, the same company that runs British Airways. It was announced this week that British Airways flight codes will appear on many of the Irish carrier’s regional UK services from the Irish capital.

Elsewhere in the market…

Although in October CityJet commenced a thrice-daily service between Cork and London City, the airline is reporting a decline in capacity of 14%, while Flybe recorded a growth of 6.5%. A new entrant to the market for W15/16 is VLM Airlines, which commenced services from Waterford to London Luton and Birmingham in April. However its impact has not affected the capacity control of existing carriers, with the regional airline only commanding 0.4% of seats within the market. VLM replaced Flybe on services between Waterford and the UK’s second city after it closed operations to the Irish airport in W14/15. 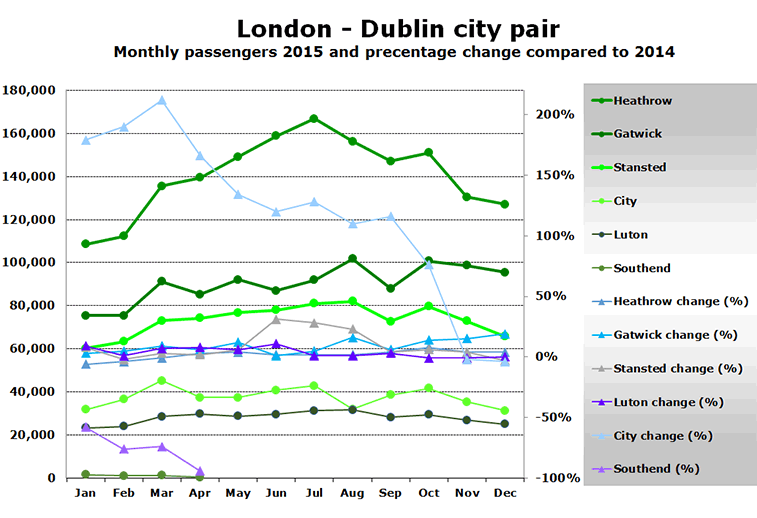 2015 was a very interesting year for the London – Dublin city pair, witnessing a total of nearly 4.44 million passengers fly between the UK and Irish capitals. The result means that the city pair becomes Europe’s busiest route, and second biggest in the world behind Hong Kong-Taipei which welcomed five million passengers last year according to numerous sources. A breakdown of the routes between London airports and Dublin is as follows: Heathrow (1.68 million); Gatwick (1.08); Stansted (0.88); City (0.45); and Luton (0.34). Services between Dublin and London Southend ended in April 2015, nonetheless the route (operated by Stobart Air) carried just over 4,000 passengers during the first four months of last year before its closure.

Looking at the city pair for last year, the most significant change was the development of connections to City (overtaking Luton to become the fourth most popular London airport), a route which last year averaged a monthly increase in traffic of 119%. This was helped by Flybe, which at the start of W14/15 introduced a service between the two airports. However, Flybe closed this route in May of last year due to increased competition from British Airways and CityJet. Elsewhere, Heathrow’s average monthly growth in passengers to Dublin was 2%, Gatwick 9%, Stansted 9%, Luton 4%, and before its closure Southend averaged -25%. 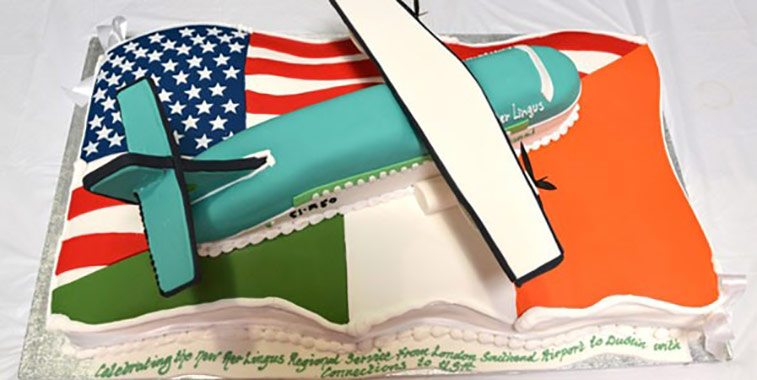 On 10 May 2012, Aer Lingus Regional launched services on a thrice-daily operation between Dublin and London Southend. Unfortunately for the Essex airport, it lost its connection to the Irish capital and indeed its many US connections in April 2015 after nearly three years in operation. With Flybe ending services to Dublin from London City in May 2015 after seven months, it means that Aer Lingus, Ryanair, British Airways and CityJet are the only airlines operating the world’s second largest passenger city pair. 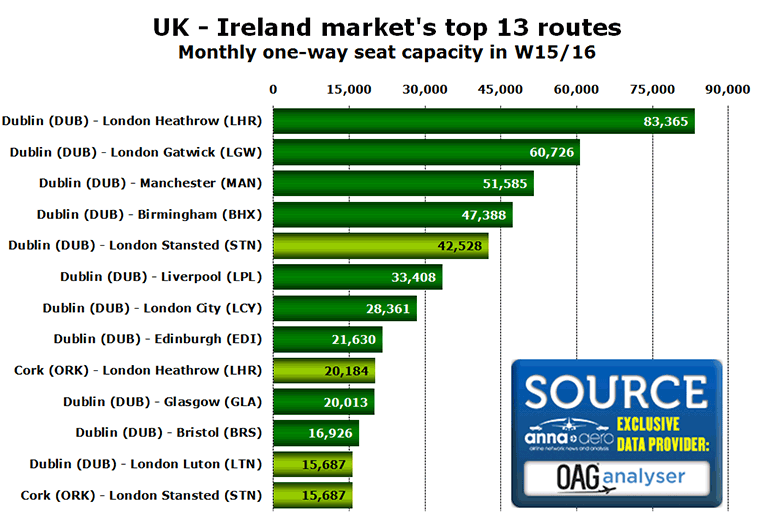 Four of the top 13 routes between the UK and Ireland (highlighted in light green) are monopoly routes, with only the service between Cork and Heathrow not being operated by Ryanair. The fastest growing route of the top 13 between the two nations is the short 215-kilometre sector between Dublin and Liverpool. Since Aer Lingus’ inauguration onto the once Ryanair dominated route, the seat capacity between the two cities has grown by 52%, raising the route from being the 11th biggest last winter to seventh this year. In regards to routes which have witnessed no new entrants, the biggest growth has been seen between Dublin and Birmingham, with seat capacity between the Irish capital and the UK’s second city up 26%, while the link from Dublin to Manchester was the second best performing route at +25%. Of the top 13 routes, the only one to report a decline in capacity is the link between Dublin and London City, a result of Flybe pulling the sector.

Flybe will be increasing its offering for the start of S16 when it recommences services from Birmingham and Edinburgh to Knock, both pencilled in by the regional airline to be launching on 28 March. Currently the carrier operates to the Irish facility from Manchester. Aer Lingus Regional has March as the intended start date to launch services from Cork to Leeds Bradford and Southampton. The carrier will also resume services between Shannon and Edinburgh during the same month. The airline, which is operated by Stobart Air, is also expected to in the future operate services to Dublin from Carlisle Airport, which the transport group also owns. The group is currently constructing terminal facilities at the UK airport, with the hope for flights to be running later in the year. 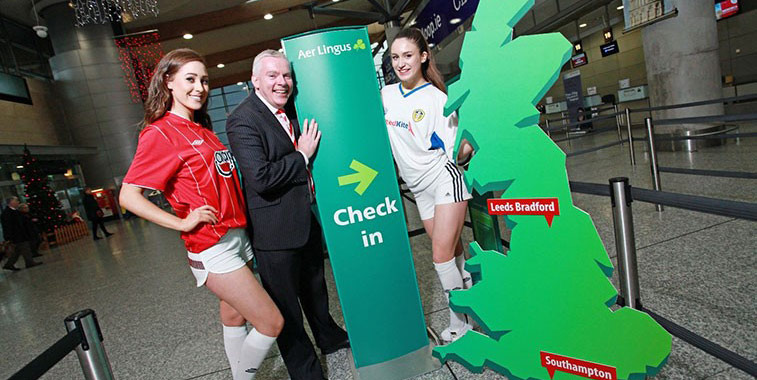 On 7 December, Aer Lingus Regional, operated by Stobart Air, announced that it would launch services to Leeds Bradford and Southampton from Cork, with Niall MacCarthy, MD at Cork Airport seen welcoming the news. So far this year a total of five services between the UK and Ireland have been announced.