US airlines will have started over 500 new domestic routes in just two years by the end of 2016; despite mega profits fares not really falling Allegiant Air launched more new US domestic routes than any other carrier in 2015 which helped the airline win a US ANNIE Award back in May. Impressive cakes have been a feature of the airline’s route launches during 2015 when, according to anna.aero’s New Route Database, the airline launched 69 new routes.

Latest data from the US reveals that passenger numbers on domestic flights have grown by more than 4% for seven straight months (April to October 2015). This is the first time since anna.aero started in 2007 that traffic has grown by more than 4% for more than three straight months (July to September 2007 and September to November 2010). In fact, demand for domestic air travel has been growing by more than 2% each month since March 2014. As a result, in the first half of 2015 336.2 million passenger journeys were made, finally beating the old record of 335.2 million set in 2007. Furthermore, July 2015 set a new all-time monthly record of 65.13 million passengers, beating the previous record of July 2007 (63.5 million). 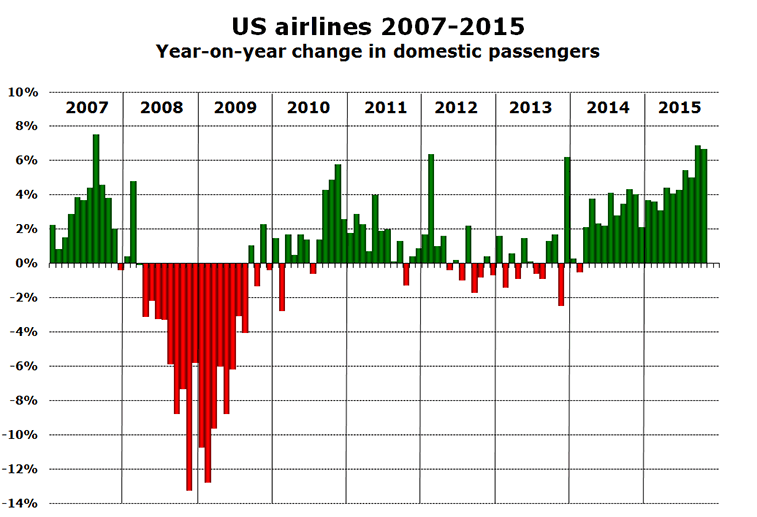 All this comes at a time when US carriers are reporting record-breaking profits thanks to a combination of factors, but helped enormously by falling fuel prices. What has not fallen that significantly are US domestic air fares. Data from the US Department of Transport’s Office of Aviation Analysis reveals that in the first two quarters of 2015, average fares have fallen by just 3.5% and are still, in real terms, above the levels monitored in both Q3 of 2011 and Q3 of 2012. 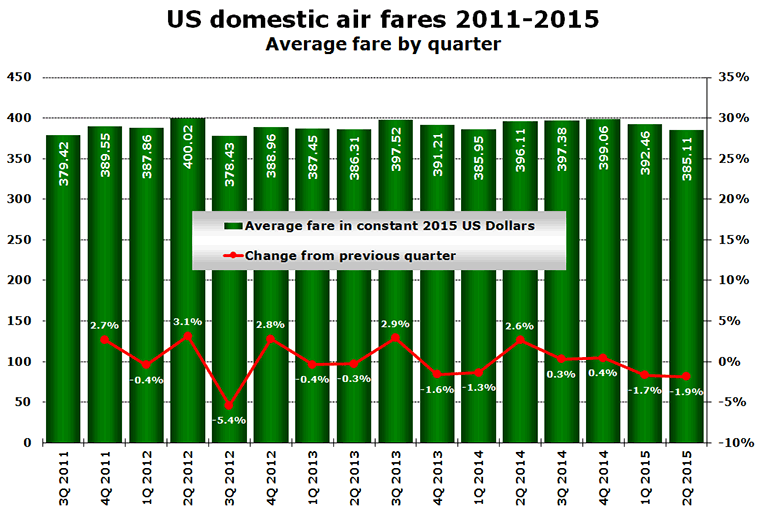 Fares are based on domestic itinerary fares. Itinerary fares consist of round-trip fares unless the customer does not purchase a return trip. In that case, the one-way fare is included. Fares are based on the total ticket value which consists of the price charged by the airlines plus any additional taxes and fees levied by an outside entity at the time of purchase. Fares include only the price paid at the time of the ticket purchase and do not include other fees paid at the airport or onboard the aircraft. Averages do not include frequent-flyer or “zero fares” or a few abnormally high reported fares.

While fares may not be falling that much (yet), US carriers do seem to be keen to use these profitable times to expand their networks. According to anna.aero’s New Route Database over 300 new domestic services were launched by US airlines during 2015, with Allegiant Air and Southwest Airlines leading the way. Analysis of our database of new services involving US airports reveals that US carriers have so far announced 190 new services that will begin at some point during 2016. This is unlikely to be the final figure as airlines are still announcing new routes for the peak summer season. Leading the way in 2016 (so far) are Frontier Airlines (63 new routes), American Airlines (36) and Allegiant Air (32), followed by Southwest Airlines (22) and Spirit Airlines (15).

Analysis of the number of domestic routes offered by America’s leading domestic carriers (based on monthly seat capacity) this August compared with last August indicates a net gain of around 150 routes (this also takes into account dropped route), with Frontier Airlines and Allegiant Air being the carriers growing their networks most, both currently forecast to have a net gain of around 50 routes compared with last summer. 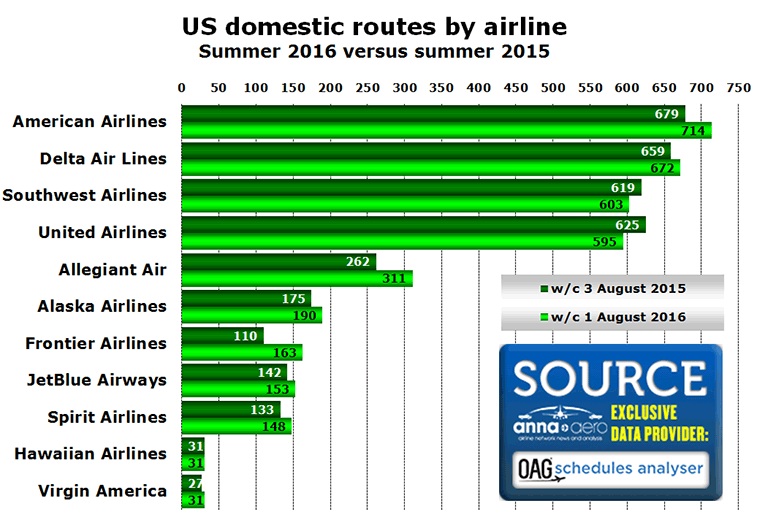 According to analysis of currently published schedule data for this August, only two carriers (Southwest Airlines and United Airlines) will be offering fewer domestic routes this summer than they did last summer. A year ago the top four airlines were separated by just 60 routes, but this summer the gap between American Airlines (714 domestic routes) and United Airlines (595 routes) has grown to almost twice that.

What may be surprising is that after these four major carriers, the airline with the fifth most domestic routes is Allegiant Air with over 300. This is because most of the airline’s routes are served at relatively low frequency, often just twice-weekly. After a raft of recent route reveals, Frontier Airlines has now leapfrogged both JetBlue Airways and Spirit Airlines to claim seventh spot, behind Alaska Airlines. Frontier’s network will have grown by almost 50% in a year with the number of routes operated increasing from 110 last August to 163 just 12 months later.

What happened to the leading airlines of 2007?

With 2015 finally being the year that demand for US domestic air travel passed the previous peak of 2007, it is interesting to look back to see which were the leading carriers just nine summers ago. Measured by weekly departing seats, the top four carriers back then are still the top four now, except that each of them merged with one of the carriers ranked fifth to eighth; US Airways with American Airlines, Continental Airlines with United Airlines, Northwest Airlines with Delta Air Lines, and AirTran Airways with Southwest Airlines. Whether this has been good for consumers as the airlines involved claimed it would be, is a matter of considerable debate given the fare data previously shown. Other airlines no longer operating in their own name (shown in bright green) are Midwest Airlines (merged with Frontier Airlines in 2010) and Aloha Airlines (which ceased operations in March 2008). 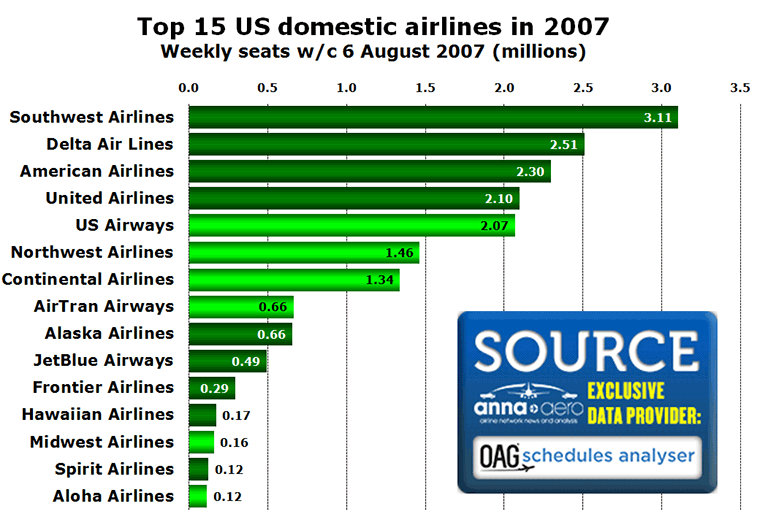 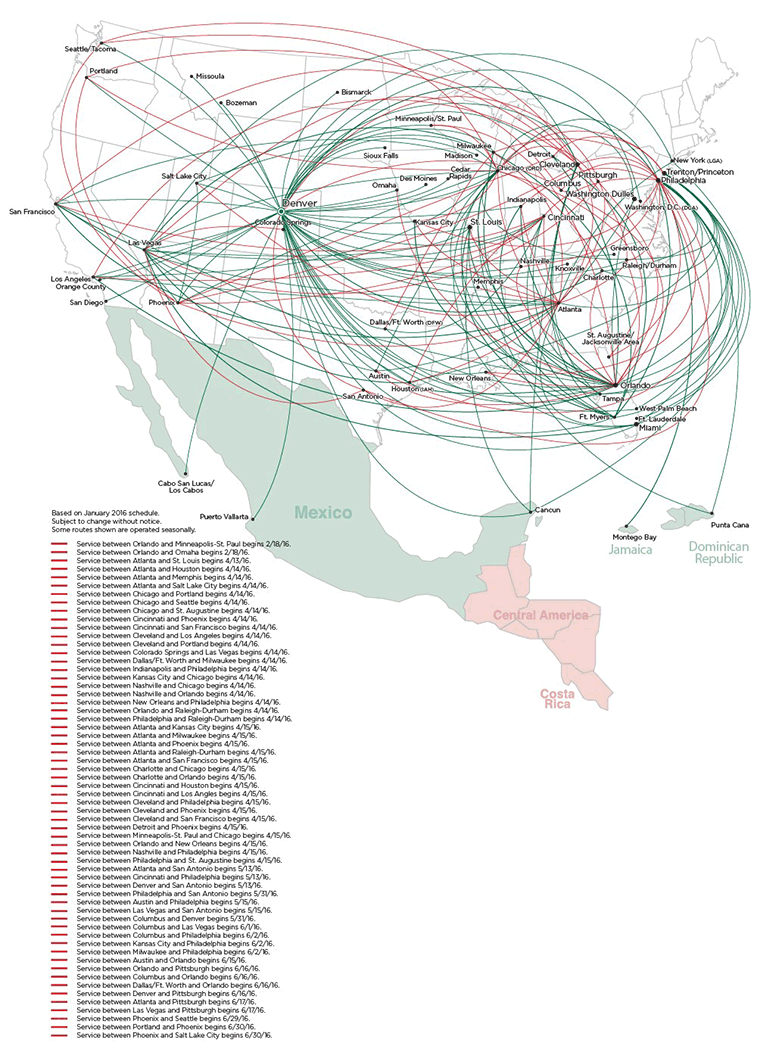 Frontier Airlines is currently the undisputed champion of new US domestic route launches in 2016. Its new routes for 2016 (shown in red) make up almost one-third of the airline’s total network this summer.