Ryanair’s Italian base closures analysed; we reveal which routes to Alghero and Pescara will survive into W16/17 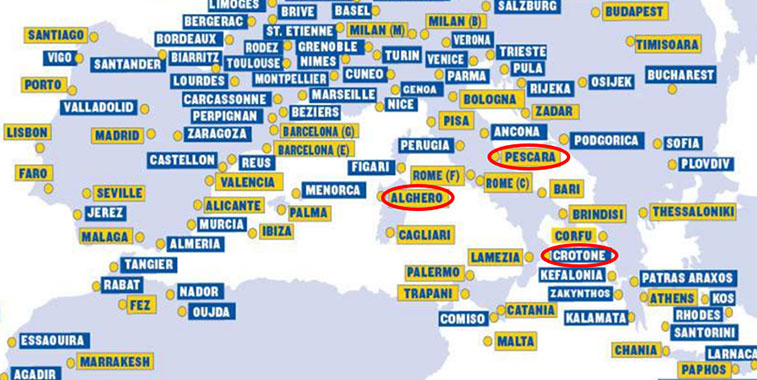 Ryanair has announced plans to close its two Italian bases at Alghero and Pescara. The ULCC will also end services to Crotone from the end of October. According to anna.aero’s research, three routes will remain in W16/17 to Alghero and two to Pescara.

Ryanair has announced plans to close two of its Italian bases, namely Alghero and Pescara, from the end of the current summer season. Originally opened as base #28 in the summer of 2008, Alghero Airport in north-west Sardinia has been served by Ryanair since June 2000 when flights from London Stansted arrived. Pescara Airport, serving the capital city of the Abruzzo region on Italy’s east coast, became base #32 for the carrier in July 2009. The range of destinations offered by Ryanair from these airports has varied considerably by season as our analysis of OAG schedule data reveals. 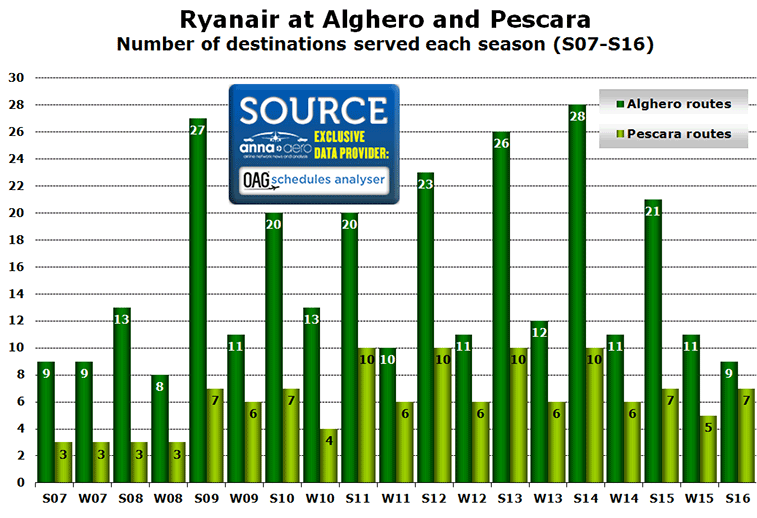 Ryanair has served a total of 38 destinations from Alghero at one time or other, while 14 airports have been connected with Pescara at some point during the last decade. Although Ryanair currently has 14 routes on sale from Alghero, five or these routes (Cuneo, Girona, Madrid, Rome Ciampino and Venice Treviso) are not available to book after 26 March, leaving just nine routes operating this summer; to Bologna, Bratislava, Brussels Charleroi, Eindhoven, Frankfurt Hahn, Memmingen, Milan/Bergamo and Pisa. However, according to Ryanair’s on-line booking tool, the three Italian routes to Bologna, Milan/Bergamo and Pisa are bookable into November.

Ryanair’s current network from Pescara comprises seven routes; Brussels Charleroi, Frankfurt Hahn, Girona, London Stansted, Milan/Bergamo, Paris Beauvais and Weeze. Of these only two are still bookable beyond the end of October; Brussels Charleroi and Milan/Bergamo. Finally, all three of Ryanair’s routes to Crotone (from Milan/Bergamo, Pisa and Rome Ciampino) are set to close at the end of October. Given that these are the airport’s only scheduled services at present it will be interesting to see what happens to the facility. 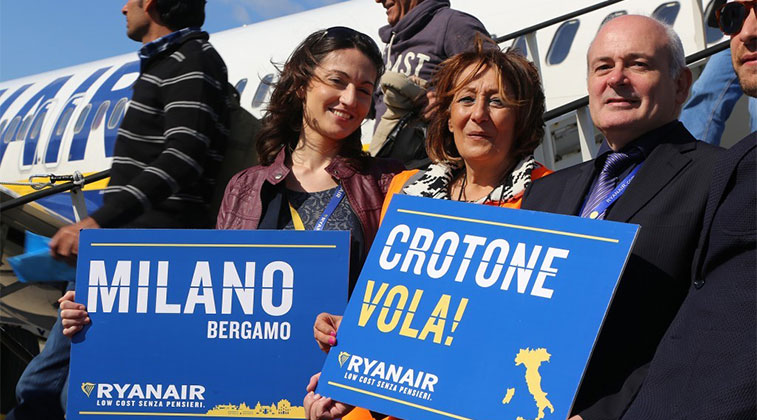 On 26 October 2014, Ryanair commenced a daily service between Milan/Bergamo and Crotone in southern Italy. On the same day the carrier also launched daily flights from Rome Ciampino. However, just 18 months after launching flights to the airport, the airline announced its intentions to withdraw, which also results in the closure of the airline’s third route to the airport, Pisa. As a result, Crotone is left with no scheduled carriers.