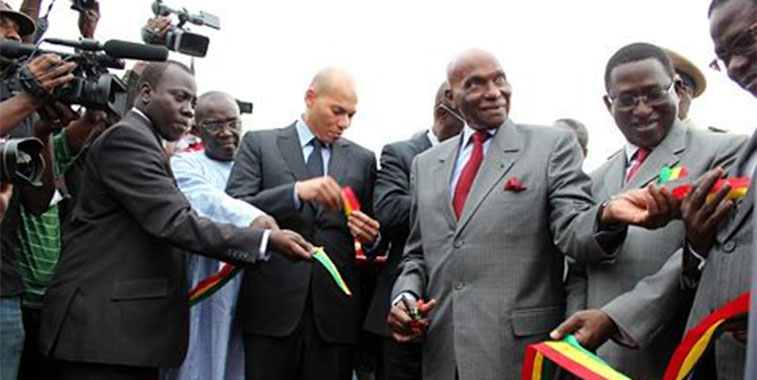 On 19 January 2011, then Senegalese President Abdoulaye Wade, cut the ribbon at the ceremony next to his son, then State Minister for Air Transport Karim Wade, to officially declare the country’s latest national carrier, Senegal Airlines, officially open for business. The carrier later launched routes a week later on 25 January. During the past 12 months, the carrier has grown from being the sixth to fifth largest airline in the nation, despite a 25% drop in seat capacity.

The name Senegal comes from the Wolof “Sunuu Gaal,” which means “Our Boat.” Senegal covers a land area of almost 197,000 square kilometres and has an estimated population of about 13.5 million people based on latest census data (2013). In the past few years, the aviation industry in Senegal has changed in regards to the country’s national carrier, with the latest venture being Senegal Airlines. The airline was set up in 2009, with flights commencing in 2011. The carrier, which operates three A320s and two Q400s, is 36% owned by the nation’s government, with the remaining 64% owned by private corporations. The airline was formed after Air Sénégal International ceased operations in 2009. The former national carrier was also part owned by the government, but at a much higher stake of 49%. Senegal Airlines is the only carrier to serve all three of Senegal’s commercial airports: Cap Skirring, Dakar and Ziguinchor. Apart from Dakar, the other two airports only see services by the national carrier to the country’s capital. Over the past few years, seat capacity to Senegal has been in decline, but for the first time in 18 months, the nation has finally recorded a growth figure. 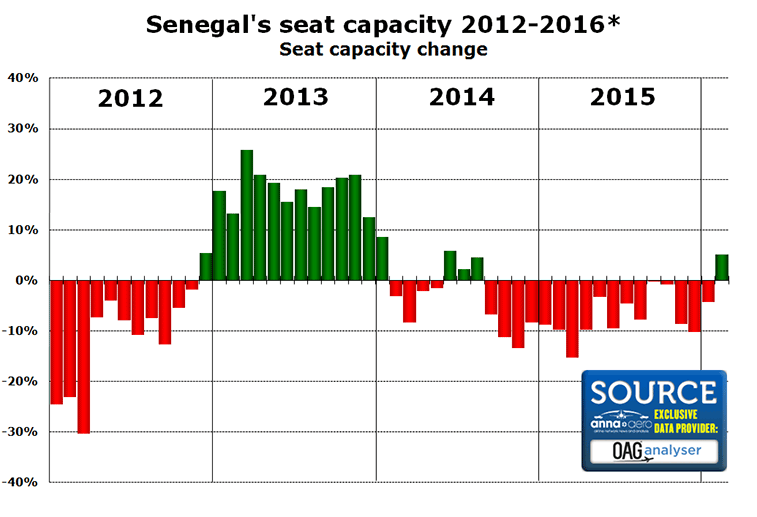 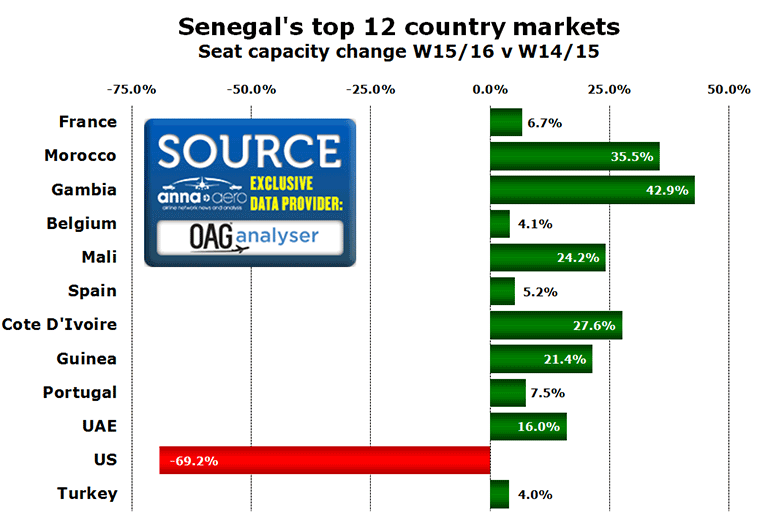 Only US records decline

Of Senegal’s top 12 country markets only the US, in 11th place, recorded a decline in capacity over the past 12 months. Two routes operate between Senegal and the US, with Delta Air Lines operating services between Dakar and New York JFK, with its 757-200s flying the 6,115-kilometre sector twice-weekly. The route in 2015 was also served by South African Airways as a stop-over on some of the Star Alliance member’s Johannesburg services to the US facility. However the airline now only uses Dakar as a stop-over on its services to Washington Dulles according to OAG Schedules Analyser data. Outside of the top 12, the country market which has recorded the biggest increase in seat capacity is that of Algeria (51% growth; 17th largest market), with Burkina Faso not far behind (44%; 20th). At the other end of the spectrum, apart from the two country markets which have been dropped from Senegal – Liberia and Nigeria – the worst market for growth was Benin, which is down 48%. Now situated in 23rd place, just in front of Togo, Benin has dropped from being the 19th largest market in W14/15. The two newest country markets to gain connections to Senegal are Ghana (18th) and Togo (24th). 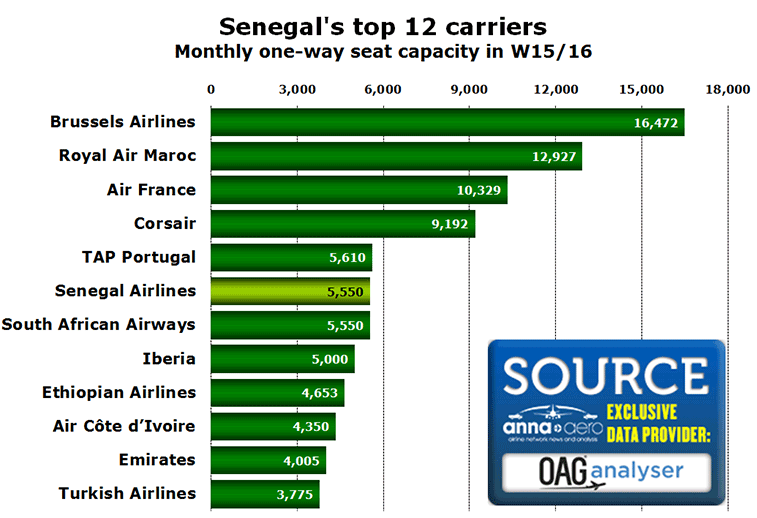 It seems quite fitting that Brussels Airlines, which has an IATA code of SN, is the number one carrier in a country which has an IATA country code of the same letters. The reason for Brussels Airlines being the number one airline in Senegal, despite a decline in seat capacity of 2.5% over the past 12 months, is that it operates two triangle routes from Dakar from its Brussels service to Banjul in Gambia and Conakry in Guinea with its A330s. Dakar is in fact the number one route for the Star Alliance member in Africa, a market which is very important to the airline’s future, recently confirmed to anna.aero by the carrier’s CEO, Bernard Gustin. National carrier Senegal Airlines (highlighted in light green) is the nation’s fifth largest carrier (tied with South African Airways), up from sixth last year. The airline, which celebrated its fifth anniversary of operations last month, achieved this growth despite a 25% shrink in its available seats. A reason for the carrier being able to move up the rankings despite reducing its capacity is due to South African recording a decline in its seat capacity of 67%, a result of Dakar no longer being the stop-over of the airline’s services from Johannesburg to New York JFK, with Accra in Ghana now being the designated port of call for the airline’s intermediate stop. Of the nation’s top 12 airlines, five recorded double-digit growth: Royal Air Maroc (35%); Corsair (17%); Ethiopian Airlines (21%); Air Côte d’Ivoire (23%); and Emirates (10%).

Blaise Diagne Airport yet to open

Blaise Diagne is the name of a new airport which will be the international gateway to Dakar, and indeed Senegal, replacing the Léopold Sédar Senghor facility which currently serves the capital. The original planned date for the new airport to become operational was during 2011. However, five years later, the airport is still not open. In April 2015, Reuters announced that a revised opening date was set for early 2016, yet no official day had been specified. On 5 February this year, Turkey’s President Recep Tayyip Erdogan pledged to improve Senegal’s infrastructure, including the construction of its main airport, as well as a sports complex and a five-star hotel, confirmed during his state visit to Senegal. Macky Sall, the current President of Senegal said two Turkish companies had been chosen to complete construction of the airport. Trade between the two countries is valued at $170 million and Turkish authorities consider Senegal as one of its key African partners. 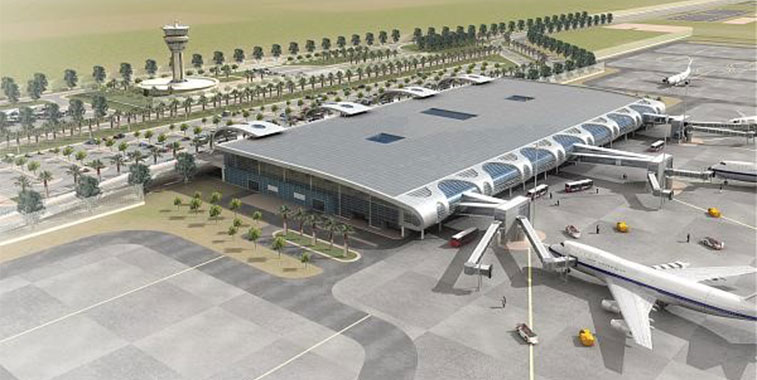 Expected to open in 2011, Dakar’s newest airport, Blaise Diagne, is yet to see commercial flights, five years after its original planned opening date. On 5 February, Turkey’s President Recep Tayyip Erdogan pledged to improve Senegal’s infrastructure, including the construction of its main airport.