On 15 December, Air India introduced the 7,651-kilometre sector between Ahmedabad and London Heathrow (via Mumbai) to its growing international network, using its 787-8s on the city pair. As a direct result of the introduction of the Star Alliance member’s services, Ahmedabad is now connected to Europe as well as airports in Asia and New York Newark in North America, a service also operated by Air India, this time via Delhi.

Ahmedabad is in the Gujarat Region of India, situated in the western part of the nation above the Maharashtra Province. According to the 2011 census, Ahmedabad’s population was approximately 7.2 million. anna.aero is a big fan of India’s sixth largest city (based on population). The data elves just love exploring the city’s wide range of festivals, and it is well known that the elves are master performers of the Garba, a dance which originates from Gujarat. The city of Ahmedabad is current served by Sardar Vallabhbhai Patel Airport, which last year welcomed 6.2 million passengers. However, a proposed new airport is scheduled to be built called Dholera International, and it will be around 80 kilometres from Ahmedabad and around 20 kilometres from the Dholera Special Investment Region (SIR). The airport at Dholera is expected to replace the existing airport at Ahmedabad, which is limited on its expansion due to geographical constraints. According to the Gujarat Infrastructure Development Board (GIDB), the new facility is expected to be operational before 2020. In the meantime, as the current airport is in operation, anna.aero’s data elves thought it would be good idea to see what’s happening at the current facility, and see how things are shaping up in terms of Ahmedabad’s development before the transition to the new transport hub takes place. 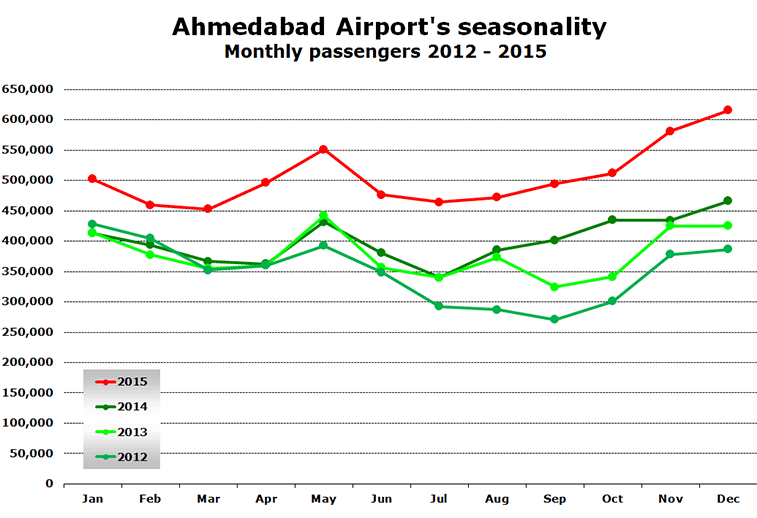 Entering Ahmedabad’s monthly passenger data for 2015 into anna.aero’s Seasonal Variation in Demand (SVID) calculator, the airport performs very well, generating a score of 1.12 ‒ an ‘Excellent’ rating. Looking at the two years prior to 2015, the airport has marginally improved its performance against its 2013 result of 1.17, however during 2014 the airport did achieve a 0.91 – which is still excellent. What can be said though is that even with the double-digit passenger growth being seen from Ahmedabad during the past few years, its seasonality has remained constant, highlighting that the extra demand being seen is year-round. 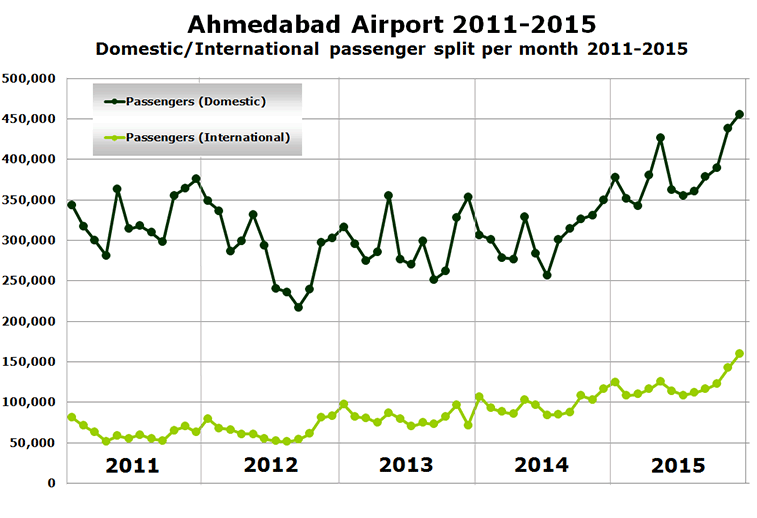 Domestic and international both up 21% 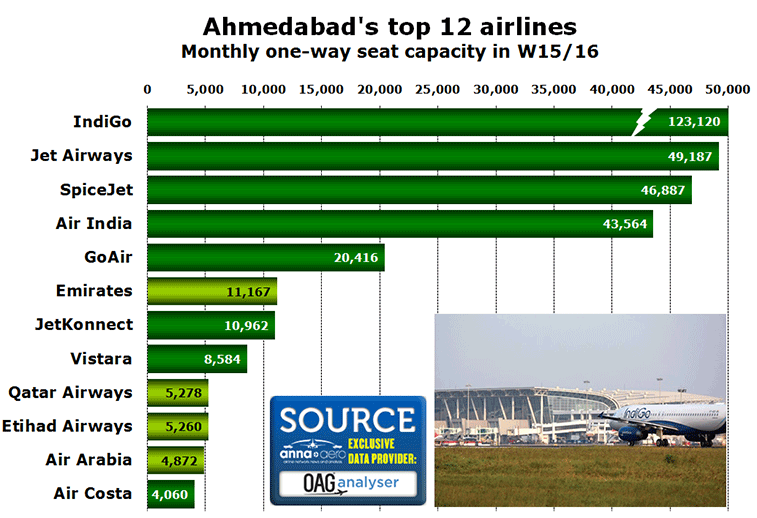 During the past 12 months, Ahmedabad has not lost any of its existing carriers, with all but three recording growth in seat capacity. According to OAG Schedules Analyser data, JetKonnect and Vistara are recording double-digit declines in capacity of 47% and 33%, with the latter only launching services to Ahmedabad from Delhi last January. The final carrier showing a drop in seats is flydubai, with its capacity down 8.6% on its route to Dubai. Coincidentally, its MEB3 family member Emirates is showing a growth of just over 15% when compared to the same time period of 2014. The top six carriers serving Ahmedabad are all reporting double-digit growth with regards to monthly seat capacity: IndiGo (22%); Jet Airways (53%); SpiceJet (49%); Air India (13%); GoAir (35%); and Emirates (15%). Of the airport’s top 12 airlines, only three (highlighted in light green) are international. The newest carrier added to the Ahmedabad portfolio is Kuwait Airways which in September launched a thrice-weekly service from Kuwait City, joining Star Alliance member and Indian national carrier Air India on the route. On 15 January, the carrier announced that it will increase its services to Ahmedabad from thrice- to five times weekly due to increased demand. 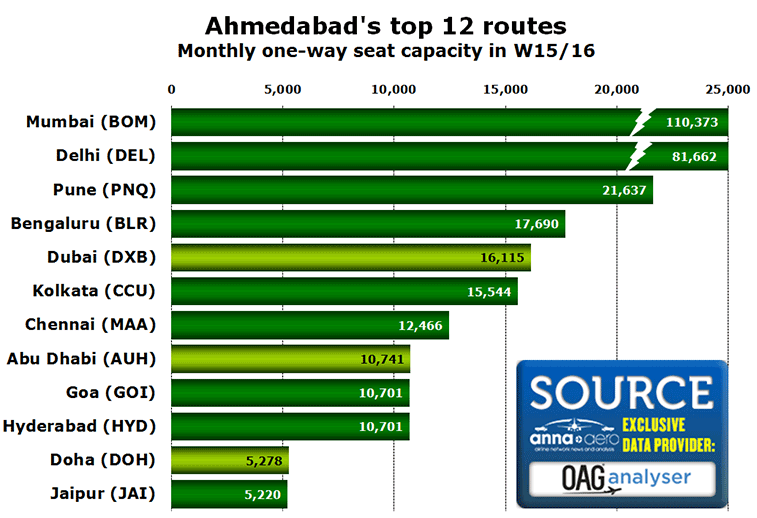 After witnessing a growth of over 18% in seat capacity during the past 12 months, Mumbai remains the number one destination from Ahmedabad. One reason for this growth is the introduction of Air India’s new service from Ahmedabad to London Heathrow which operates via Mumbai, meaning that its 787-8s now operate on the link between Ahmedabad and Mumbai. Increased services to Delhi also helped maintain the Indian domination at the top of the airport’s top 12 routes, after it also witnessed double-digit growth of 26%. The star of the show though in terms of all routes out of Ahmedabad is Pune (third largest), which in the last year has recorded a growth of 61%. The result has led to Pune rising from being the 10th largest route during W14/15. A reason for this increase in seats is due to IndiGo growing its capacity on the city pair by 56%, while GoAir has also introduced services between the two since last February. However, as a result of these two carriers expanding capacity, Jet Airways has reduced its seat offering by 16% on the sector. Only three of the airport’s top 12 routes (highlighted in light green) are to international destinations. In regards to international routes, a market where Ahmedabad has witnessed a strong growth in traffic, Dubai – the largest international route from the airport – has seen capacity reduced by 0.8%. The reason for this shrinkage is due to flydubai’s previously mentioned capacity cull. Nonetheless fellow MEB3 hubs, Abu Dhabi and Doha, are both reporting growths of 54% and 3.4% respectively from Ahmedabad. Outside of the top 12, the best performing route for increased monthly capacity is Muscat which is up 43%, followed by Kuwait City which is up 33%, helped by the introduction of Kuwait Airways’ services. Currently no new routes are in the pipeline from the airport in 2016 according to anna.aero’s New Route Database. 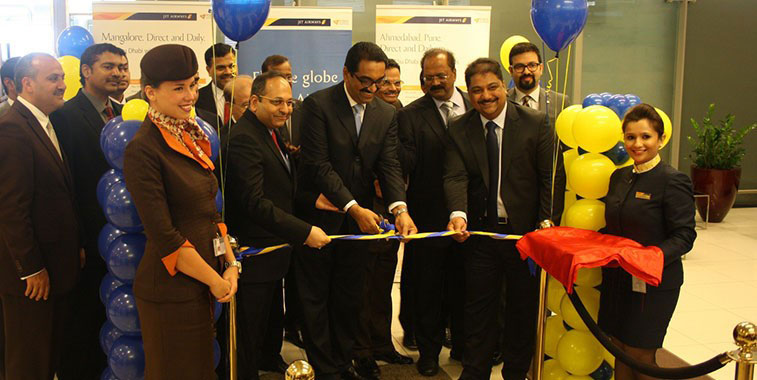 On 29 March last year, Jet Airways introduced daily services from Ahmedabad to Abu Dhabi, with the Indian carrier launching Mangalore and Pune flights to the UAE hub as well. The result of this route launch has helped contribute to the 54% growth in seat capacity which has been achieved during the past 12 months between Ahmedabad and Abu Dhabi.