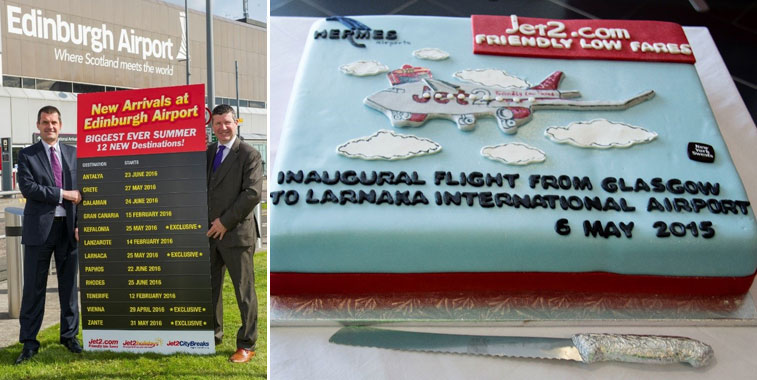 People living in the catchment area of London’s airports may never have heard of Jet2.com, but this UK-based airline transported over six million passengers in 2014, the majority to holiday destinations in Spain, Portugal and Greece. With a fleet of over 50 Boeing aircraft, with an average age of over 20 years, the airline currently operates from seven UK bases: East Midlands, Leeds Bradford, Manchester and Newcastle in England; Edinburgh and Glasgow in Scotland; and Belfast in Northern Ireland. Launched in February 2003 from its home base at Leeds Bradford, the LCC (which belongs to the Dart Group PLC) also has its own holiday company Jet2holidays. This summer, for the first time, the airline will be operating more than 200 routes. 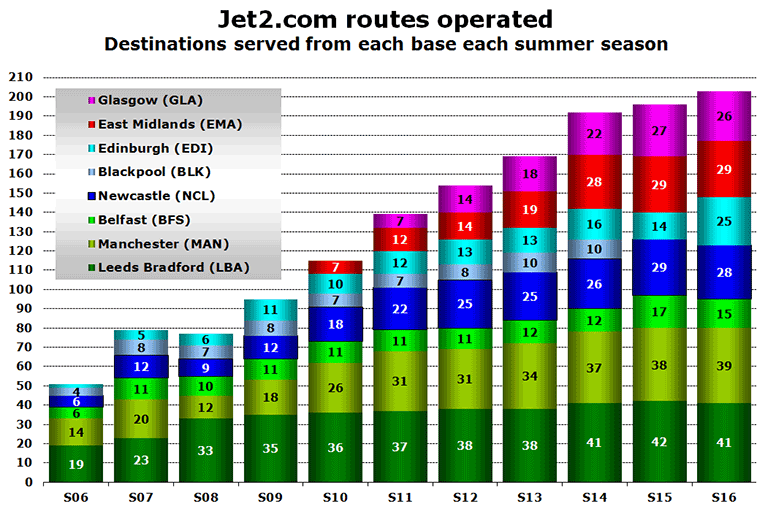 Source: OAG Schedules Analyser for first week of August for each year.

According to the parent company’s last financial statement covering the period year-ending 31 March 2015, Jet2.com flew 6.05 million passengers at a load factor of 91.2%. Of these one million were package holiday customers generating two million passenger trips. The remaining 4.05 million were flight-only passenger sectors. Of the 55 aircraft operated at the end of that period (27 737-300s, 17 737-800s and 11 757s), 44 were owned while 11 were on operating leases. The airline currently has orders for 30 737-800NGs which are due to be delivered between now and the end of 2018. Many of these will be used to replace existing aircraft, but it seems likely that some will be used for growth. During the peak summer season Jet2.com also wet-leases some additional aircraft. 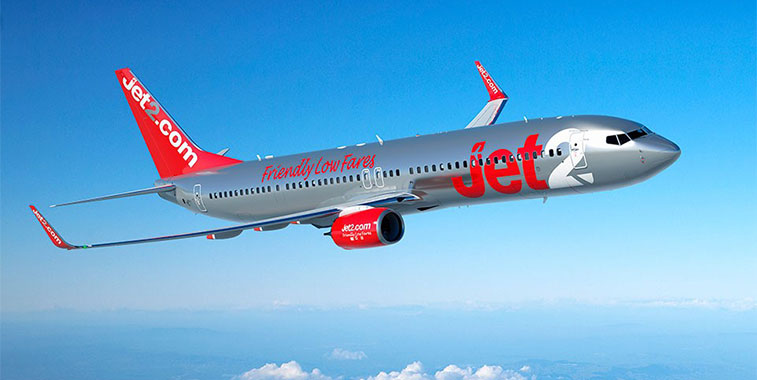 Commenting on the airline’s decision to order new 737-800NGs last September, Philip Meeson, Executive Chairman of Jet2.com, said: “Today’s order for 27 additional 737-800NGs will be delivered over the next two years and will provide Jet2.com with the necessary cost effective, reliable and comfortable environment to allow us to build upon our already highly successful family friendly business. We are extremely pleased to have finalised this order for more of what has already proven to be a popular, aircraft within our fleet.”

The airline’s business model (until now) of operating older aircraft, with associated lower ownership costs, has meant that, like Allegiant Air in the US, the airline only operates flights when it can make money. With its focus on leisure traffic from the UK to the Mediterranean, analysis of the airline’s scheduled seat capacity by month between 2013 and 2016 reveals extreme seasonality. 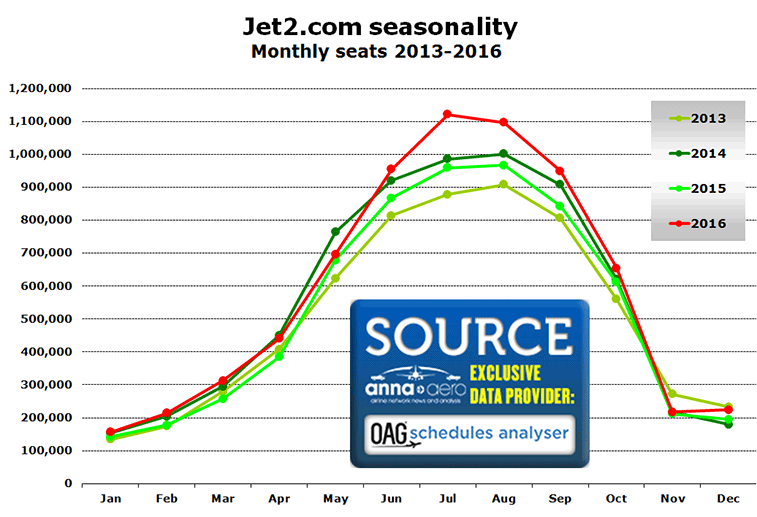 According to OAG schedule data Jet2.com will be offering over 1.1 million seats in July and August 2016, but only just over 150,000 in January. If anything, the seasonality is becoming ever more extreme with the airline offering over 100,000 more seats in July and August than it did last year, although in percentage terms the biggest increase in 2016 will be seen in March. This is because Easter falls at the end of March this year rather than in April.

Eight out of top 10 destinations are in Spain

A closer look at the airline’s network for this summer reveals that eight of the top 10 destinations are in Spain, with Palma de Mallorca beating Alicante. The leading non-Spanish destinations are Faro (ranked third) and Heraklion (tenth). A total of 45 destinations in mainland Europe will be served in August 2016, with Bergerac in France being the only airport served just once per week (from Leeds Bradford). 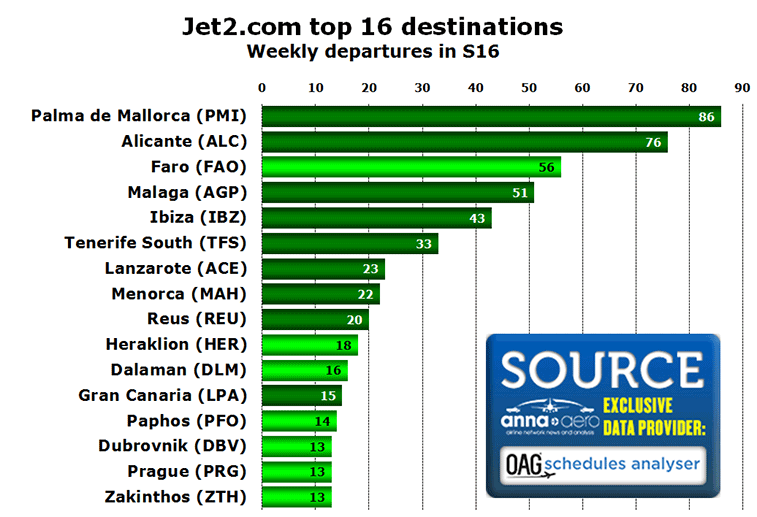 Although the airline’s focus is on beach destinations, it does also serve a number of city-break type destinations, such as Amsterdam, Budapest, Düsseldorf, Krakow, Paris, Pisa, Prague, Rome, Toulouse, Vienna and Verona.

This summer Jet2.com will be operating over 400 flights per week from the UK to Spain, representing 57.5% of all flights. This is up from Spain’s 56.1% share of flights recorded last summer. The Spanish market is over six times bigger than the next largest country market for the airline, Portugal. A total of 15 country markets are served this summer, the same number as last August. Last May the airline started five new routes to Enfidha in Tunisia but these were dropped after the June 2015 Sousse terrorist attack which resulted in the death of 30 UK tourists. 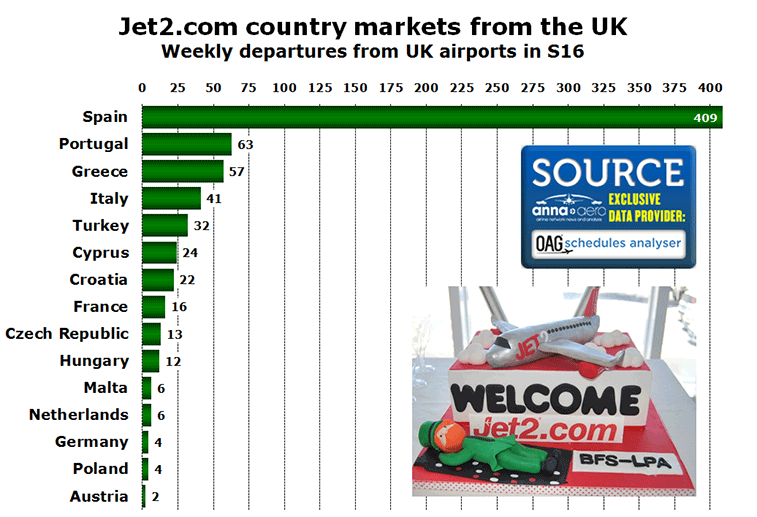 The only new destinations in the airline’s network this summer are Girona, near Barcelona, and Naples. The Spanish airport will be served from Glasgow, Manchester and Newcastle, while Naples will be served from Manchester. According to anna.aero’s analysis of OAG schedule data Jet2.com will launch 20 new routes in 2016 while dropping 14. 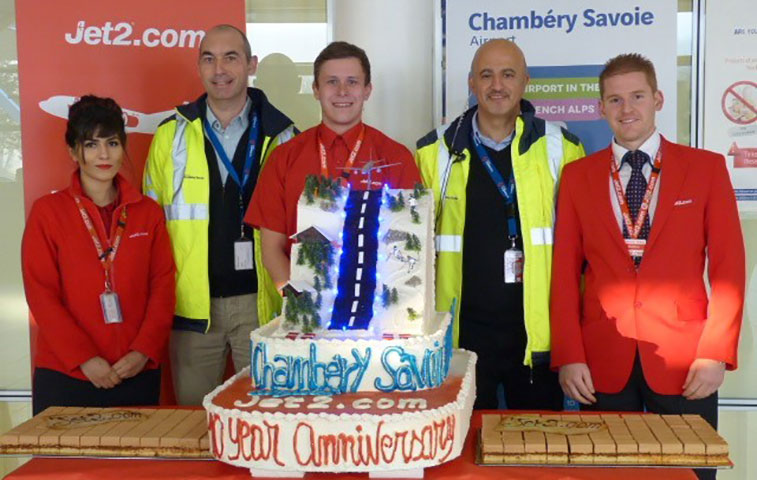 Although Jet2.com’s network is much smaller in winter it does operate a few seasonal services to ski destinations, including Chambery in France. Last December the airport celebrated 10 years of Jet2.com operations having first welcomed flights from Leeds Bradford and Manchester on 17 December 2005.