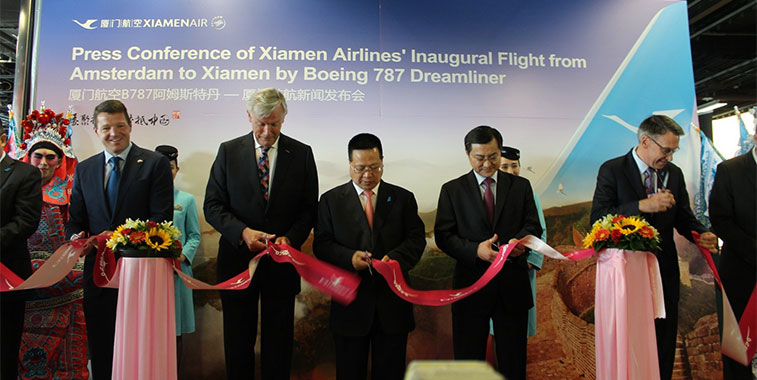 China, the second biggest air transport market in the world after the US, has seen its airports grow Q1 capacity by almost 10%, representing an increase of over 13 million seats. Helping to fuel this growth are the country’s airlines with Xiamen Airlines adding more seat capacity since 2015 Q1 than any other carrier apart from Ryanair and China Eastern Airlines. This included last July’s launch of services to Amsterdam.

It has long been recognised that economic growth is a key driver of aviation growth. So analysis of airline schedule data for the first quarter of 2016 and 2015 should give an interesting insight into the global economy. Using OAG Schedules Analyser, anna.aero has compared seat capacity on offer from the world’s 228 separate states. Across the globe seat capacity is up 7.3% in the first three months of this year, though adjusted for the extra day in February this represents 6.1% growth on a like-for-like basis.

Among the worlds’ top 20 country markets, 18 are reporting growth in scheduled seat capacity, with Brazil and Malaysia being the notable exceptions. In Brazil’s case this is indeed due to the country’s economic woes, but for Malaysia it is more to do with the restructuring of Malaysia Airlines under its new management. The flag-carrier is reporting an 18% reduction in seat capacity this quarter while local rival AirAsia is growing its seat capacity by around 6%. 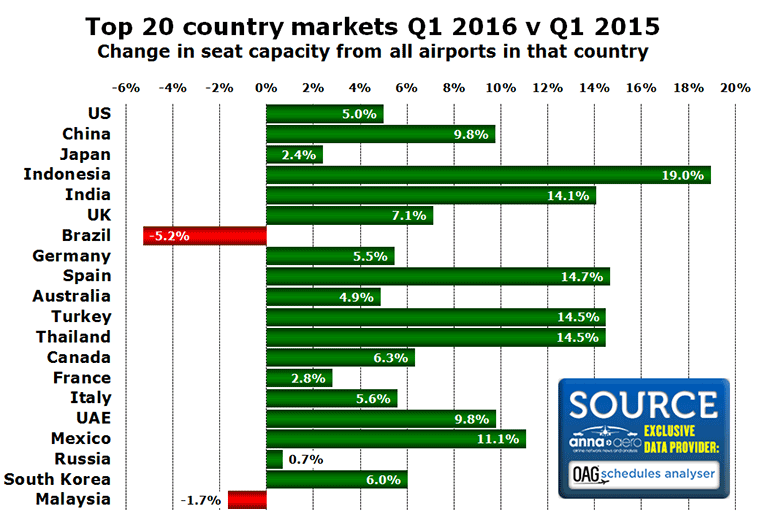 China’s seat growth (+9.8%) is around double that of the US (+5.0%). A year ago Brazil ranked fourth but has now slipped to seventh, while the UK which ranked fifth has overtaken Brazil but has itself been leap-frogged by both Indonesia and India. Indonesia’s growth of 19%, which sees it jump from seventh to fourth, trumps the impressive growth of between 14% and 15% that has been identified in India, Spain, Turkey and Thailand.

China tops US for increase in seats

If the increase in quarterly seats is used as our metric, then China now comes out on top, with growth of more than 13 million seats compared with 11.6 million more seats in the US. Indonesia’s rapid growth means it ranks third for additional seat capacity, ahead of India, Spain and Turkey. 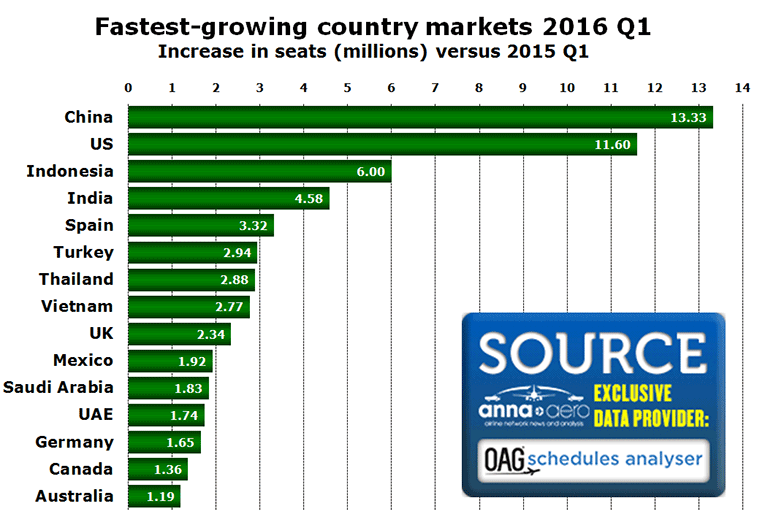 Of the world’s top 20 airlines in the first quarter of 2016 (as measured by seat capacity) 16 are reporting growth, with the exceptions being All Nippon Airways and Japan Airlines in Japan, Air France, and GOL in Brazil. Conversely five airlines are growing seat capacity by more than 10%, with Ryanair reporting an impressive 22% growth in scheduled seats, followed by Turkish Airlines (+15%). The four biggest airlines in Q1 are the four biggest carriers in the US, followed by two Chinese carriers. Ryanair is the leading European carrier ahead of Turkish Airlines, Lufthansa, easyJet and British Airways. 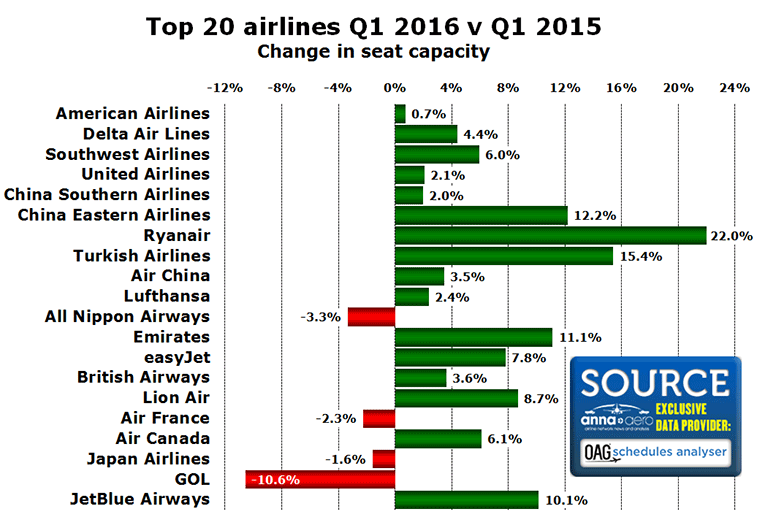 Ryanair adds more seats than any other carrier

Looking at which airlines have added the most seats in Q1 2016 compared with Q1 2015 there is only one winner. Ryanair has added more than 50% more seats than any other carrier, easily beating China Eastern Airlines and Xiamen Airlines. In terms of additional seats, Emirates is still the fastest-growing MEB3 carrier beating Qatar Airways and Etihad Airways. 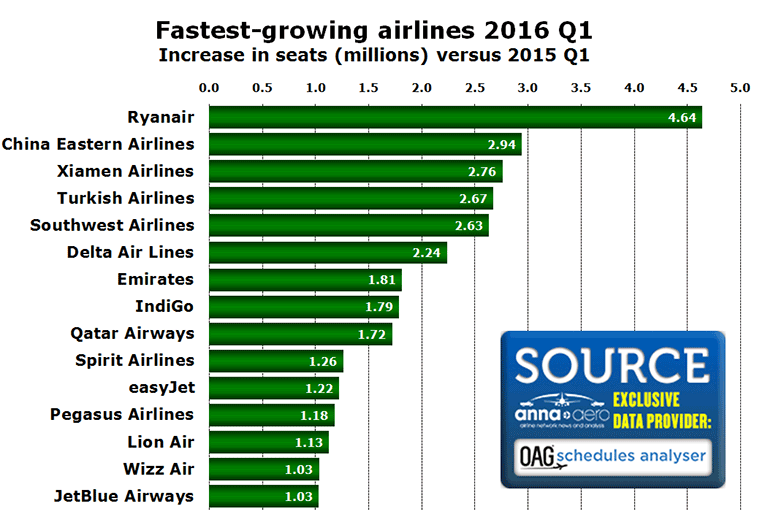 Both Turkish Airlines and its local rival Pegasus Airlines make the top 15, while there are four US carriers, with Southwest Airlines leading Delta Air Lines, Spirit Airlines and JetBlue Airways. Ryanair is not the only EU-based LCC in the rankings with easyJet and Wizz Air also featuring. Wizz Air’s one million additional seats represents year-on-year growth of 23.5%, only beaten among the top 15 airlines by Spirit (+26.0%) and Xiamen Airlines (+42.2%). 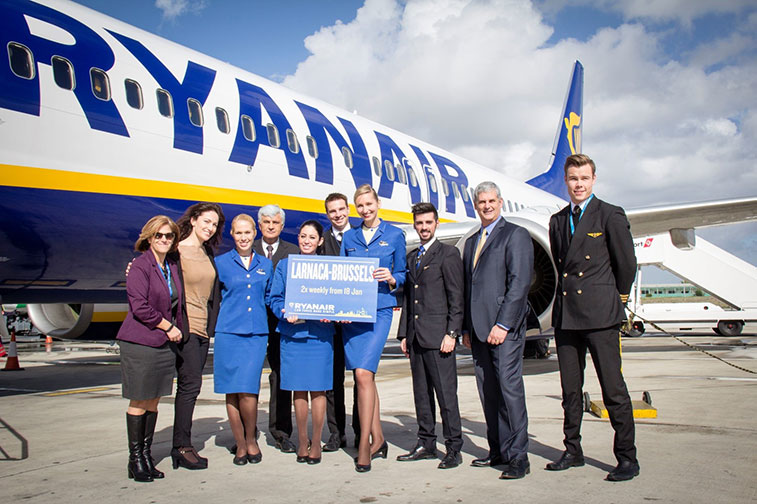 Ryanair is growing fast this winter. December passenger numbers were up 25% to 7.5 million, an increase of 1.5 million passengers. This is consistent with our analysis that shows the ULCC is offering 4.6 million more seats in the first quarter of 2016 than it did in the same period in 2015. This includes new routes such as the one between Brussels and Larnaca which was launched on 18 January.