Launched in late 2011, VietJetAir has established itself as Vietnam’s second biggest airline after state-owned Vietnam Airlines. In the domestic market the LCC is now almost as big as its older rival and offers around twice as many seats as the third largest carrier, Jetstar Pacific Airlines, which is majority-owned by Vietnam Airlines. At the end of 2015, VietJetAir’s fleet comprised 28 aircraft according to Airbus data, 25 180-seat A320s and three 230-seat A321s. Its first A321, which it received in March 2015, was the 9000th Airbus delivered to an airline. Out of an order for 99 Airbus narrow-body aircraft the airline has so far received 11. More recently the airline celebrated another major milestone. At the end of January, VietJetAir carried its 19 millionth passenger, travelling between Ho Chi Minh City and Thanh Hoa. It has taken just over four years to reach this figure.

A closer look at the airline’s schedule data shows the importance of the route between Vietnam’s two major cities, Ho Chi Minh City (formerly known as Saigon, hence its IATA code of SGN) and Hanoi. This airport pair is served with more than 20 daily flights in each direction, with the first flight departing Ho Chi Minh City at 06:00, while the first flight of the day from Hanoi departs at 05:35. A total of 11 routes are served with more than 14 weekly flights. Of these nine are from Ho Chi Minh City and three are from Hanoi (highlighted in light green), with the route between the two airports counted twice. 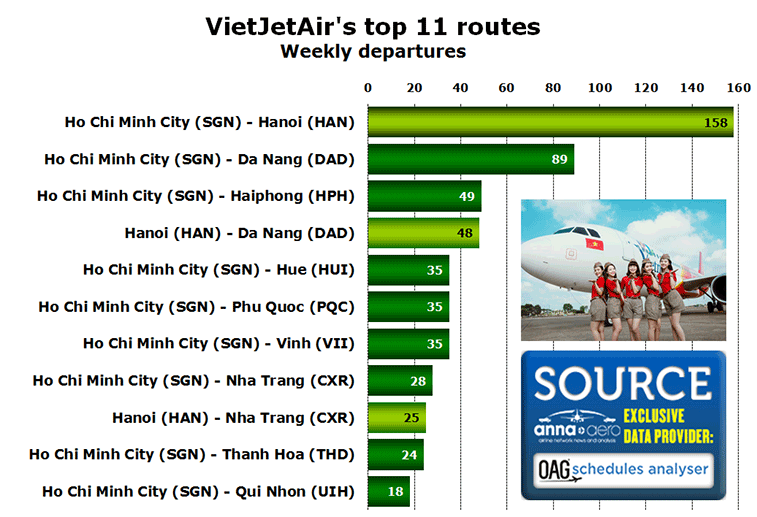 VietJetAir currently operates just eight international routes, five from Ho Chi Minh City and three from Hanoi. However, all five are in different countries; Myanmar, Singapore, South Korea, Taiwan and Thailand. A new thrice-weekly service between Hanoi and Taipei launched (just in time for Chinese New Year) on 1 February. At present there appear to be no plans to expand the airline’s international network. The following table summarises the airline’s international network and indicating the weekly frequency on each route. On 23 May 2014, VietJetAir began service to Singapore, the LCC’s second international destination after Bangkok. The new service was celebrated with this delightful cake at Changi Airport.

In total the airline operates almost 40 routes involving 17 airports in Vietnam and five outside of the country. Destinations no longer served include Hangzhou in China and Siem Reap in Cambodia. anna.aero estimates that with the airline’s current network and seat capacity it seems likely that the 20-million passenger milestone will be reached in a matter of weeks, possibly in early March. 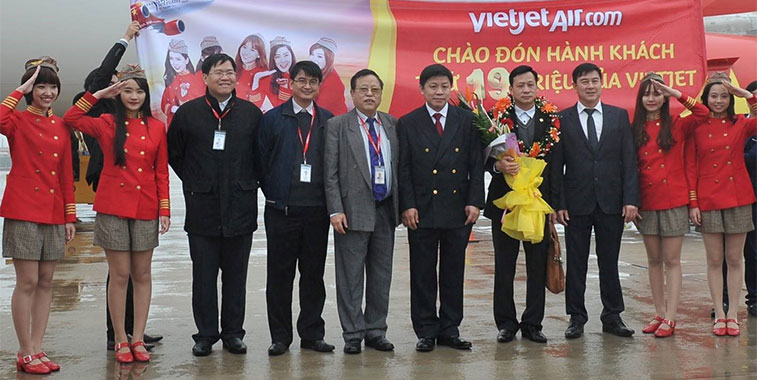 On 31 January VietJetAir reached its latest milestone – 19 million passengers. The lucky passenger, Mr. Nguyen Chi Duc, received free flights on the airline for a year when he landed at Tho Xuan Airport which serves the city of Thanh Hoa on flight VJ360 from Ho Chi Minh City.