When Turkish Airlines, easyJet and Ryanair all launch new routes from your airport in the same year it’s no surprise if traffic grows by 17%. That’s what happened at Porto Airport in 2015 when the facility handled more than eight million passengers for the first time, more than three times as many as it handled in 2003.

Located in northern Portugal along the Douro River estuary, Porto is the country’s second biggest city with an urban population of around 2.2 million people. The city’s airport is located around 11 kilometres northwest of the city centre. Since 1996 passenger numbers at the airport have quadrupled from under two million to over eight million. This is equivalent to average growth of 7.7% per annum during that period. Arguably, even more impressive has been the airport’s growth in the last three years with traffic up 34% since 2012. With almost 17% growth in 2015 Porto Airport was one of Europe’s fastest-growing airports of its size. 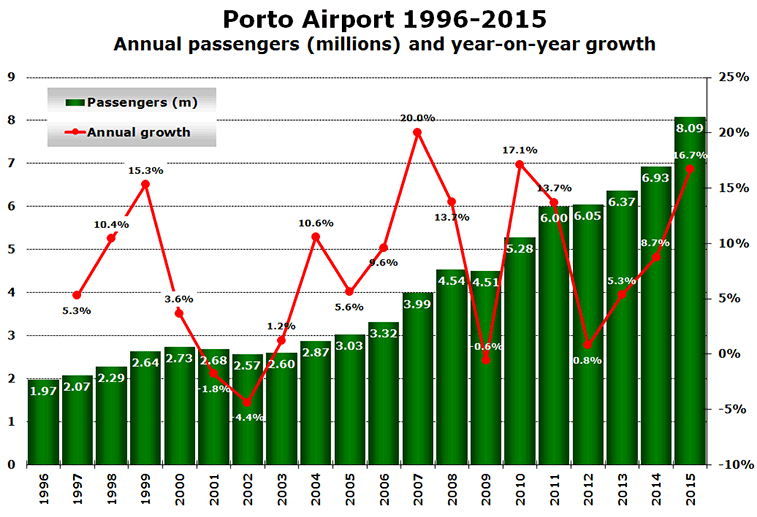 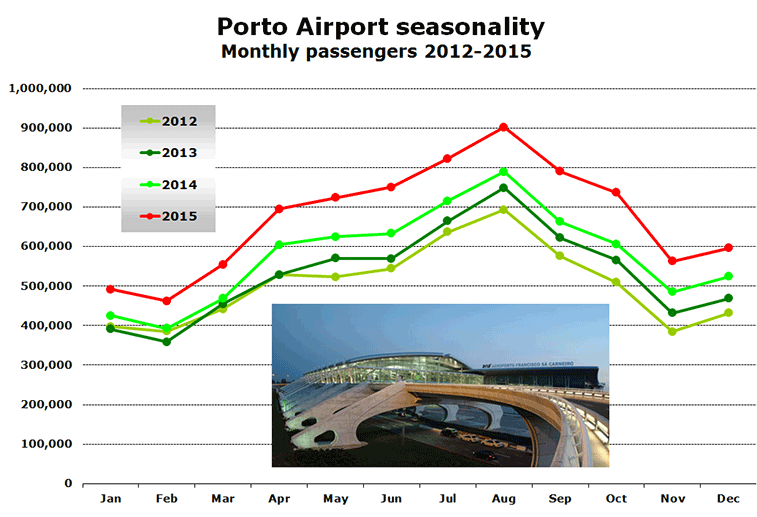 Analysis of OAG schedule data for 2015 and 2014 shows that Ryanair is the leading carrier at Porto, having made the airport its 33rd designated base as long ago as September 2009. Last year it extended its lead over TAP Portugal by growing capacity by 18%. Three other LCCs (shown in bright green) make the list of the airport’s top 12 airlines, and they all grew seat capacity last year by more than 25%. Conversely, the airport’s two leading legacy carriers, TAP Portugal and Lufthansa, only grew their seat capacity by 0.3% and 0.2% respectively. 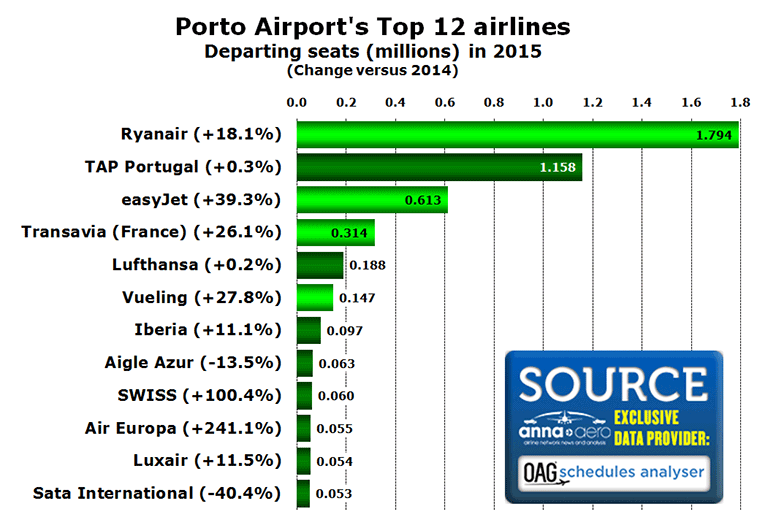 easyJet, which first served Porto in 2007 from its Geneva base, made the Portuguese airport a designated base last summer and doubled the number of destinations served during summer from six to 12. New routes launched last year were Bristol, London Luton, Luxembourg, Manchester, Nantes and Stuttgart. Among the airlines welcomed to Porto in 2015 for the first time was Turkish Airlines, which began four times weekly flights from Istanbul Atatürk on 30 April last year and Czech Airline which began twice-weekly flights to Prague on 22 May.

A similar analysis of the leading country markets for 2015 and 2014 shows that the top 12 have remained the same, and in the same order! The top 10 country markets are all in Europe, with Brazil and Angola the leading non-European markets (shown in bright green). Growth rates among the top 12 country markets varied between plus 37% for the Luxembourg market to minus 2% for the Netherlands. France remains by far the biggest country market, with Paris served particularly well by Aigle Azur (Orly), easyJet (CDG), Ryanair (Beauvais and Vatry), TAP Portugal (Orly), Transavia France (Orly) and Vueling (Orly). Just outside the top 12 are Canada and the US, with Turkey and the Czech Republic new country markets in 2015. 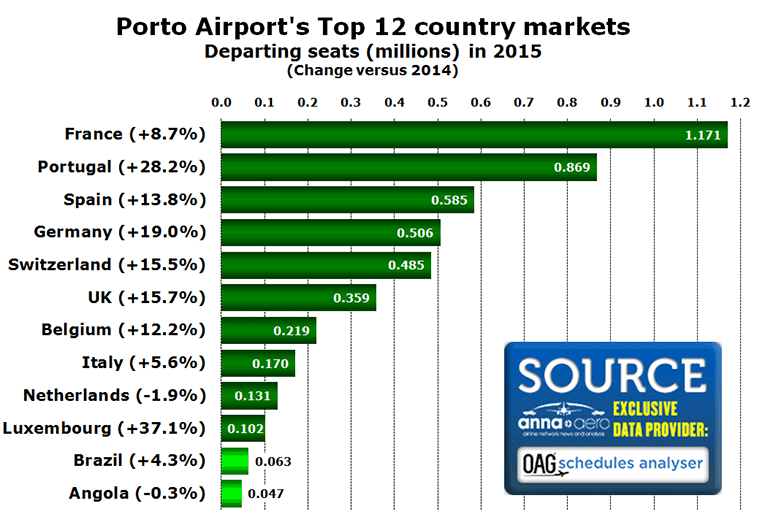 Last week saw the launch of the first new service of 2016 when British Airways began four times weekly flights from London Gatwick. At present a further eight new routes are expected to start during the summer season spread across seven different country markets. The only duplication is in Germany, where both Lufthansa and Transavia are planning to start competing services from Munich. All of these routes will be launched by foreign carriers, with frequencies ranging between one and four flights per week. Wizz Air’s recently announced twice-weekly service from Warsaw Chopin, set to launch in mid-May, will be the airline’s first service to Porto, and also the airport’s first direct service to Poland.

However, TAP Portugal appears to be dropping four routes at the end of the current W15/16 season. After the end of March the Star Alliance carrier is no longer selling seats for flights to Barcelona, Brussels, Milan Malpensa and Rome Fiumicino. These services are all operated on TAP Portugal’s behalf by Portugalia, which will be rebranded as TAP Express from the start of the S16 season. It is worth noting that Barcelona is already served by Ryanair and Vueling; Brussels by Brussels Airlines, Ryanair and Vueling; Milan by Ryanair (to Milan/Bergamo); and Rome by Ryanair (to Rome Ciampino). It’s not just LCCs that have been adding new routes at Porto Airport. Last May Czech Airlines began twice-weekly, seasonal flights to Prague using an A319, the first non-stop flights to the Czech Republic. This summer will see the airport’s first non-stop scheduled services to another Central European country, when Wizz Air begins twice-weekly flights to Warsaw Chopin in mid-May.