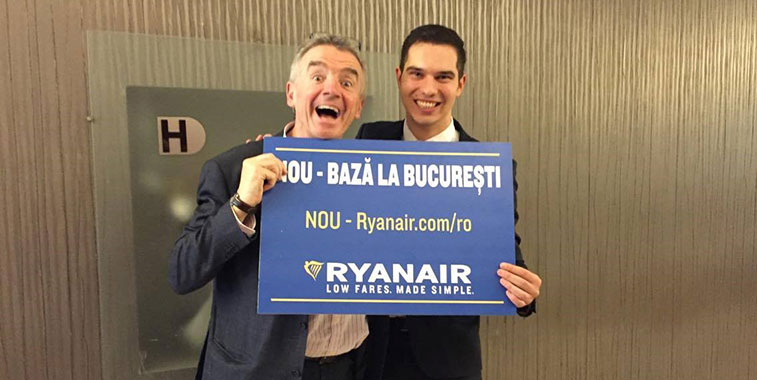 On 16 February, Ryanair announced Bucharest as its second Romanian base (#81 overall), with three aircraft deployed at the airport. “Romania is the undiscovered jewel of European tourism and in five years, we estimate there will be 10 million passengers in this country market,” pointed out Michael O’Leary, CEO, Ryanair to anna.aero’s Vlad Cristescu.

Following the announcement of Timisoara Airport as its first Romanian base on 14 January, Ryanair continued its expansion in the Romanian market with the addition of its second base (#81 overall) at Bucharest Airport (perhaps better known as “Henri Coandă” International Airport), effective 30 October. The Irish ULCC will base a total of three 189-seat 737-800s at the airport, operating 10 airport pairs to: Brussels Charleroi, Dublin, London Stansted, Madrid, Milan/Bergamo, Bologna, Rome Ciampino, Milan Malpensa, Athens (starting on 27 March) and Timisoara (starting on 1 November). Overall, Ryanair will operate a total of 91 weekly flights from Bucharest to a total of seven country markets. As a consequence, the carrier’s passenger numbers from Bucharest will increase by 75%, up to a total of 1.4 million passengers per year. According to the airline’s officials, Ryanair will invest $300 million and support over 1,000 jobs at the airport. To mark the opening of its second Romanian base, Ryanair hosted a special press briefing yesterday in Bucharest, giving anna.aero’s Vlad Cristescu a chance to catch up with Ryanair’s CEO, Michael O’Leary.

anna.aero: What have been the biggest challenges of managing the #1 LCC in Europe in 2015?

Michael O’Leary: The biggest challenge in 2015 was humility. It’s really hard to be humble, when Ryanair is so brilliant, in every single aspect. Besides this, the second biggest challenge was improving the customer service. Even though we keep lowering the prices, our services keep getting better and better.

aa: Is Ryanair’s sudden development in the region a direct response to the expansion that has been seen from Wizz Air in recent months?

MOL: This has nothing to do with Wizz Air, as we always wanted to expand in Eastern and Central Europe. We had avoided this region for the last number of years, as there were better business opportunities in Spain and Italy, where we have become the #1 carrier, but also in Germany, where we are expanding strongly. We had an aircraft shortage and could not allocate any to countries such as Poland, Romania, Czech Republic and Slovakia. Nonetheless, we are now taking delivery of 50 new aircraft per year. We don’t respond to other airlines, we execute our own growth plans!

aa: With Bucharest being the sixth base you have announced so far in 2016, how many more can we expect for W16/17?

MOL: There will be one or two more bases being announced this year, depending on our negotiations with airports. The W16/17 schedule is almost finalised.

aa: We believe that as a result of your new strategy of serving higher frequency routes between primary airports, the airline is becoming less seasonal. Based on this, are you planning to ground fewer aircraft for W16/17 (compared to W15/16)?

MOL: For W16/17, we are down to grounding between 25-30 aircraft, which is almost what we need to get our winter maintenance done.

aa: Have any of the routes launched from Bucharest exceeded the demand anticipated? Will the capacity therefore have to be changed in order to match the supply with higher demand?

MOL: It is a bit early to investigate this as we have been flying here for less than 12 months. We certainly have very high load factors and based on this we are adding new frequencies. We want to get all these announced routes launched first, while we will introduce new airport pairs and frequencies for S17, depending on the outcome of our proposal with Bucharest.

aa: Blue Air is currently rapidly expanding its Bucharest base. What is Ryanair’s view with regards to the increased competition from the hybrid carrier?

MOL: The more competition there is at an airport, the better it is for passengers. If Wizz Air, Blue Air and Ryanair are all expanding in Bucharest, the consumer will benefit from lower prices and increased travel options. Nonetheless, Ryanair will ultimately win the price war, due to our lower cost when compared to Wizz Air and Blue Air. Speaking about Wizz Air, they have 50% higher costs when compared to us. In every market we have competed with Wizz Air, they decided to withdraw.

aa: Where do you see Ryanair in five years’ time? How quickly do you hope to grow?

MOL: We should have grown from 105 million to 150 million passengers in five year’s time.

aa: What does Ryanair think about the possibility of the UK leaving the EU?

MOL: I believe the Brexit will be bad for both the UK and EU economy and consumer. We will campaign actively for a yes vote in the Brexit referendum. Leaving the EU will not affect the air travel, as the UK will still have to comply with the EU market’s regulations as Norway does.

aa: Why did you reduce the capacity to France by 6% for S16, while the overall Ryanair network growth is around 12% (based on current OAG schedule data)?

MOL: We decided to switch over capacity to better destinations elsewhere, due to France being the least attractive market for growth in Europe. We are not opening the Marseille base during the summer as we are fed up with the interference from the French authorities. Even though we are cutting back capacity at Bordeaux and Marseille, we are opening new routes in France.

aa: Despite your opposition to the German travel/eco-tax you have opened bases in Cologne Bonn, Berlin Schönefeld, Nuremberg and Hamburg. Is this a preemptive strike against Lufthansa’s focus on its lower-cost Eurowings subsidiary? 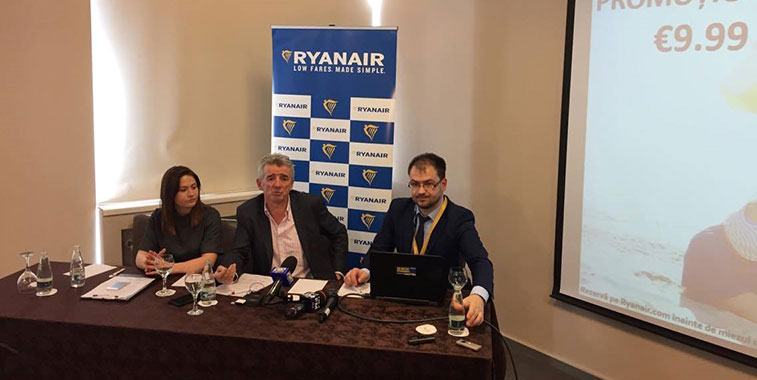 “Wizz Air has no chance in competing with us as they have 50% higher costs. In every market we have competed with the Hungarian carrier, they decided to withdraw,” confessed O’Leary, who was flanked in Bucharest by Ryanair’s Lisa Cashin, Communications Manager and Denis Barabas, Sales and Marketing Executive Romania and CEE.