VLM Airlines hoping for better fortunes in Friedrichshafen after lack of success in Liege; operating eight routes across five countries in S16 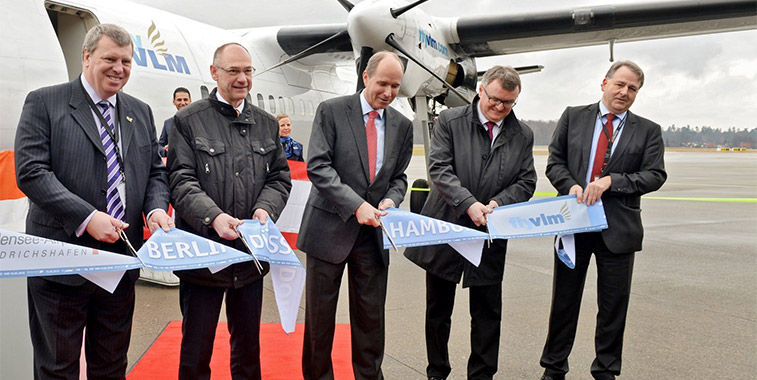 VLM’s new CEO Hamish Davidson (far left) helps cut the commemorative ribbon at Friedrichshafen Airport on 15 February to celebrate the launch of the airline’s base at the southern German airport and the start of three domestic routes; to Berlin Tegel, Düsseldorf and Hamburg. Each of these will be served twice-daily on weekdays.

Belgian-based regional carrier VLM has had an interesting 12 months. The Fokker 50 operator resumed scheduled operations under its own name, opened a base at Liege in Belgium (which it then closed just six weeks later), appointed a new CEO, and this week opened a base at Friedrichshafen in Germany. Originally launched in May 1993 the carrier was taken over by Air France and in 2010 started operating flights on behalf of CityJet, another Air France carrier, mainly from London City Airport. However, following the sale of CityJet to German investors in 2014, VLM organised a management buyout to become an independent carrier once more. While a couple of its Fokker 50s are still used to operate on behalf of CityJet, VLM re-entered the scheduled market in early 2015 with flights between Antwerp and Geneva. The following summarises the airline’s own-brand scheduled operations since the beginning of 2015, showing the number of weekly flights during each season.

The Liege base proved extremely short-lived with all routes closing after less than seven weeks of operation due to poor passenger loads. However, it did help the Belgian airport report traffic growth in May 2015 of 13.1%. In the first four months of the year the airport had seen year-on-year traffic declines of between 22% and 37%. The Antwerp to Birmingham route will sadly end early next month after just five months of flights, despite winning anna.aero’s Arch Of Triumph Award for 2015.

The new base at Friedrichshafen came about after the collapse of InterSky last November. With plenty of historic traffic data VLM Airlines presumably feels that this is a marker in which it can be successful. Basing three Fokker 50s there means that, in effect, one aircraft is dedicated to each of the three routes to Berlin Tegel, Düsseldorf and Hamburg. 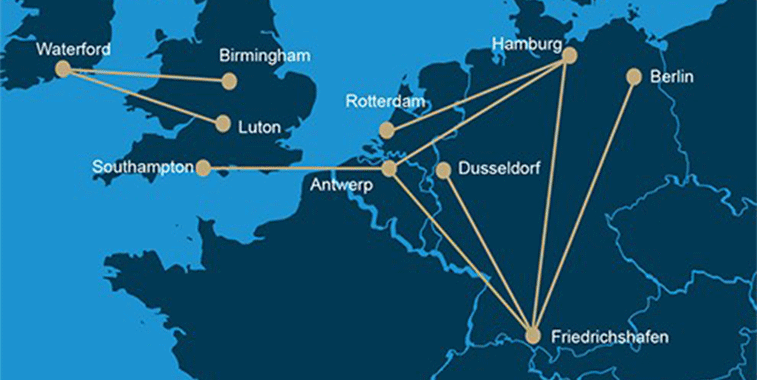 This summer VLM Airlines will operate eight non-stop routes involving 10 airports in five countries. The airline’s route map shows a direct service between Antwerp and Friedrichshafen, but this is actually a one-stop service via Hamburg according to the airline’s booking tool.