Last July saw the arrival of two new carriers at Kaohsiung Airport. On 9 July, Scoot began thrice-weekly flights from Singapore while on 15 July AirAsia launched daily flights from Kuala Lumpur, a route not served by any other carrier.

Kaohsiung, Taiwan’s second largest city, is served by Kaohsiung International Airport. Since 2009 the airport’s traffic has grown steadily with three of the last four years seeing double-digit growth. The dramatic collapse in passenger numbers between 2006 and 2009 can mostly be explained by the opening in early 2007 of a 340-kilometre high-speed rail line that linked Taipei with Kaohsiung. This had been the airport’s busiest route. By passing the six million passenger mark once more in 2015, Kaohsiung Airport overtook Taipei Songshan Airport which saw passenger numbers drop by 4.0% to 5.86 million, to become Taiwan’s second busiest airport. However it is still well behind Taipei Taoyuan Airport which handled 38.5 million passengers last year. 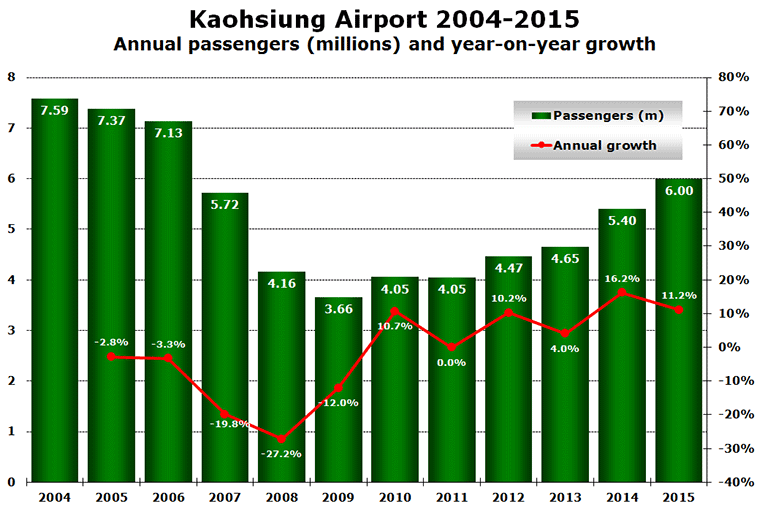 According to OAG Schedules Analyser, Kaohsiung currently welcomes 21 airlines operating scheduled flights. Three of these started their first flights at the airport in 2015. Singapore’s Scoot began thrice-weekly 787 flights from Singapore in July and was followed a week later by AirAsia which launched daily flights from Kuala Lumpur. The third new carrier was local LCC Tigerair Taiwan (a subsidiary of TransAsia Airways) which introduced flights to Macau, Osaka Kansai and Tokyo Narita, although its main base is at Taipei Taoyuan. 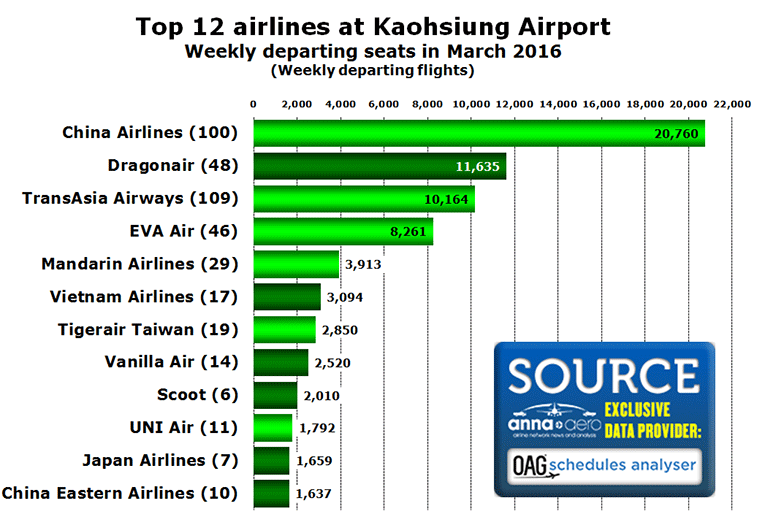 Five of the airport’s top seven airlines are Taiwanese (shown in bright green) with Dragonair the leading foreign carrier, operating 48 weekly flights to Hong Kong, followed by Vietnam Airlines, which has daily non-stop flights from both Hanoi and Ho Chi Minh City. China Eastern Airlines is the leading Chinese carrier with 10 flights per week spread across four airports in China. China Southern Airlines has just six flights per week while Air China currently has no flights at all. Other Chinese carriers with a small presence include Juneyao Airlines, Spring Airlines and Xiamen Airlines.

A total of 46 destinations are served with non-stop flights at present. By far the biggest route is to Hong Kong, which alone accounts for just over one quarter of all weekly seat capacity at the airport. The route is served by China Airlines, Dragonair and Mandarin Airlines, all operating multiple daily flights on the 663-kilometre route. There are just three domestic routes (shown in bright green) among the top 15 as measured by seat capacity, while there are four Japanese routes. New destinations launched in the last year include Changzhou (China Airlines), Fukuoka (China Airlines and EVA Air), Kuala Lumpur (AirAsia), Kumamoto (China Airlines) and Wuxi (China Eastern Airlines and UNI Air). The airport’s longest flights, at just under 3,000 kilometres are to Kuala Lumpur, Sapporo and Singapore while the shortest is the 134-kilometre domestic route to Makung. 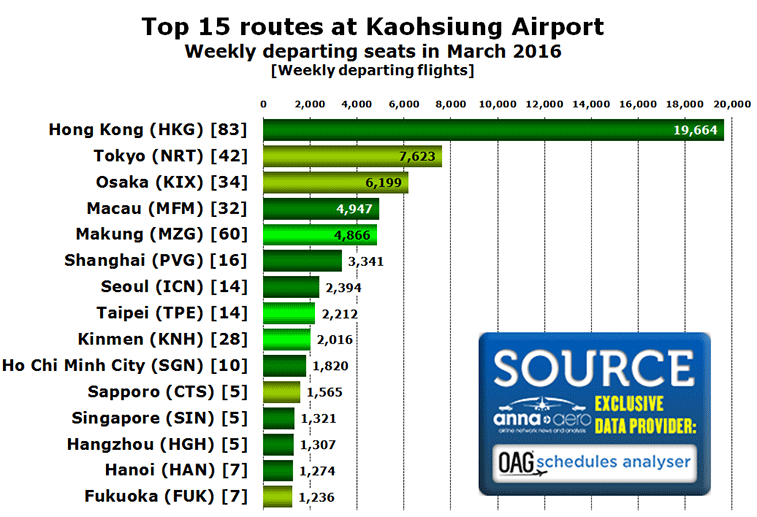 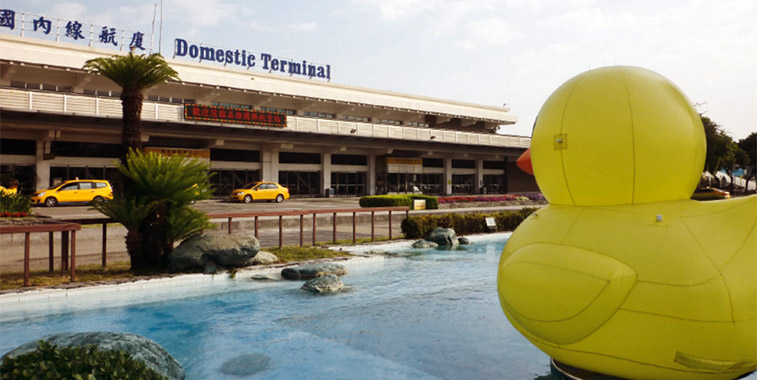 Kaohsiung Airport has a single 3,150-metre runway and separate domestic and international terminals. The airport features a number of unusual sculptures and art installations.