Alaska Airlines now #5 in US domestic market; 30 million passengers and 20 new routes in 2015; focus on California growth in 2016 On Thursday 18 February, Alaska Airlines added not one, not two, but three new destinations from its second biggest base at Portland in Oregon. Daily flights to Kansas City, Minneapolis-St. Paul and Omaha all began that day using E175s operated by SkyWest Airlines.

Last year Alaska Airlines and its regional subsidiary Horizon Air carried more than 30 million passengers for the first time, mostly on domestic flights. According to OAG Schedules Analyser data for this February, Alaska Airlines is now the fifth biggest carrier in the US domestic market (as measured by seat capacity), behind American Airlines, Southwest Airlines, Delta Air Lines and United Airlines. However, the airline ranks just 13th among carriers operating international flights to and from the US. It recently unveiled the first significant changes to its corporate identity for over 20 years, which will be reflected on around 20% of the airline’s fleet by the end of 2016. 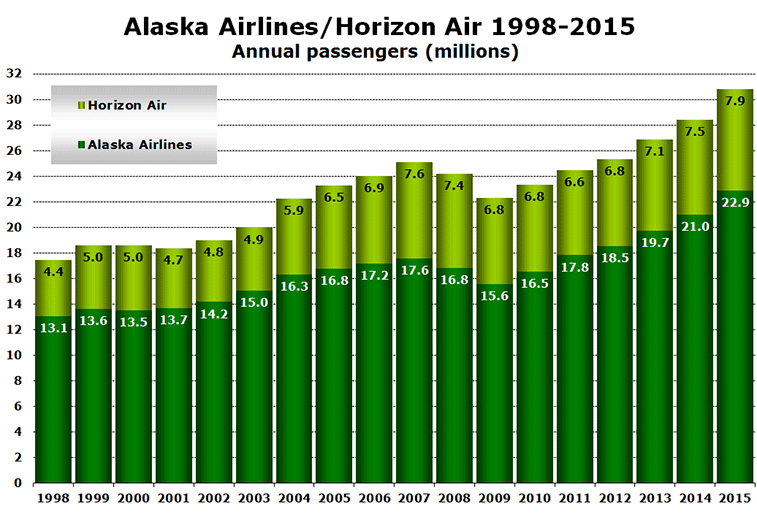 Since 2009, the Alaska Air Group has seen passenger numbers grow by 38%, with last year’s growth of 8.3% the highest since 2004’s 11.2%. The airline’s fleet of over 140 737-series aircraft (all operated by Alaska Airlines) and over 52 Q400s (operated by Horizon Air) is supported by some SkyWest Airlines Bombardier CRJ 700s and Embraer E175s which are used on longer regional routes, and have been used to introduce three new routes from Portland during the last week.

Significant growth in California in 2016

Seattle-Tacoma Airport has long been Alaska Airlines’ biggest base and this summer the carrier will be operating almost three times as many seats from the airport as from its next biggest base at Portland in Oregon. Only three of the airline’s top 15 airports are actually in Alaska; Anchorage (third), Juneau (ninth) and Fairbanks (thirteenth). Among the top 15 airports, four are reporting capacity growth of more than 10% this summer, with three of them in California (San Diego, San Jose and Orange County), and the other, Las Vegas, in neighbouring Nevada. 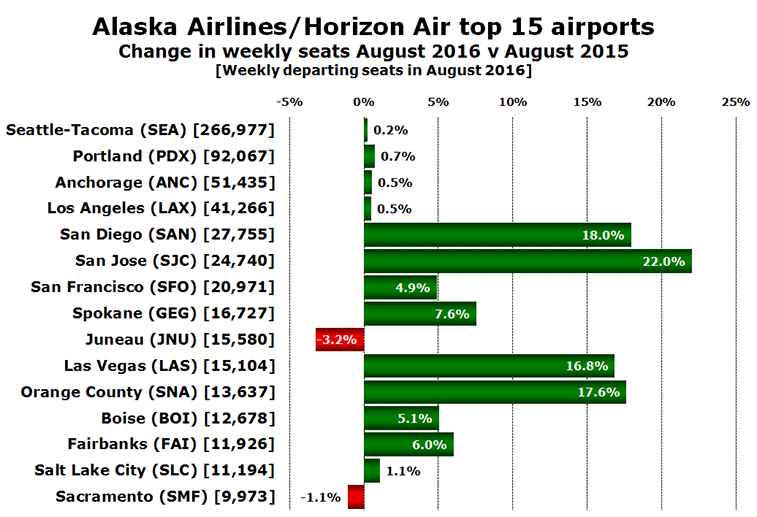 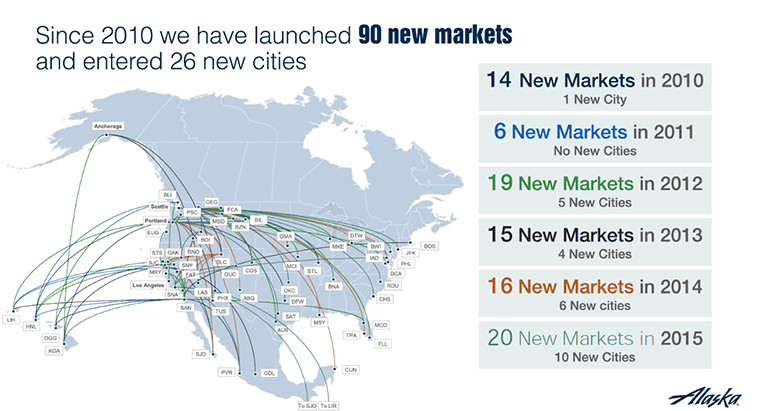 This slide from Alaska Airlines’ most recent investor presentation in early December summarises the airline’s growth in terms of new markets (meaning routes) and cities since 2009.

A summary of Alaska Airlines’ new routes for 2015 is provided in the following table. On 11 of the routes the airline faces competition from incumbent carriers, with five routes previously only served by Southwest Airlines.

While Alaska Airlines ventured into a number of already served markets, other carriers started services in 2015 that provided (extra) competition on Alaska Airlines’ routes. Notably, Delta Air Lines began new routes from Seattle-Tacoma to Billings, Boise, Denver, Edmonton, Ketchikan, Kona, Missoula, Orlando, Pasco, Sacramento and San Jose del Cabo. However, according to Alaska Airlines, the carrier still accounts for 51% of seats at Seattle-Tacoma Airport in 2015, the same as in 2012. While Delta’s share has grown from 11% to 20% in the last three years, this market share gain has come at the expense of American, Southwest, United and carriers other than Alaska Airlines.

The last week has seen the start of three new daily services from Portland to Kansas City, Minneapolis-St. Paul and Omaha, all flown by E175s operated by SkyWest Airlines. Last week Alaska Airlines announced two new intra-Californian routes from San Jose to San Diego and Orange County beginning on 8 June, bringing the total number of new routes so far revealed for 2016 to nine.

Two of the nine new routes target Delta monopoly routes, while three others are currently only served by Southwest. Clearly the airline, which has had an impressive track record of profitability in recent years, is not afraid to take on some of the even bigger airlines in the US domestic market.

Alaska Airlines operates a few logojets (we particularly love this one that promoted the animated film Cars) and has recently introduced a revised corporate identity that freshens up the classic design.