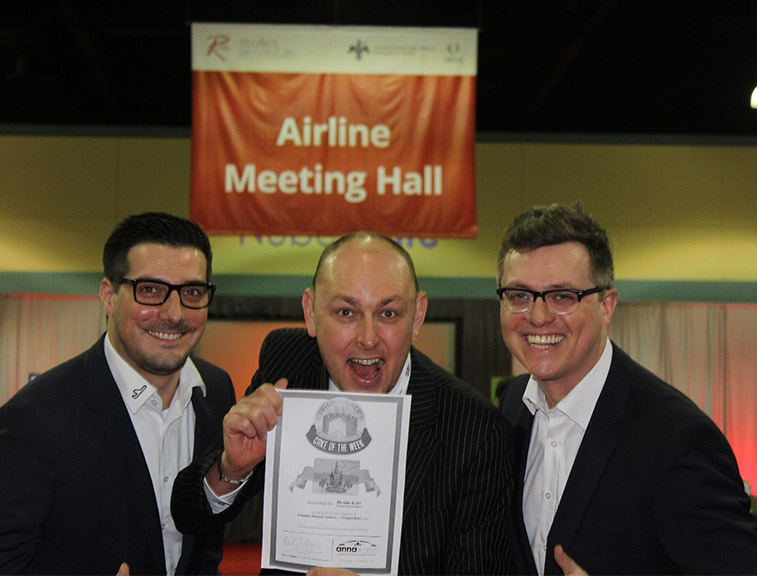 During last week’s Routes Americas Conference in Puerto Rico, anna.aero’s Editor, Marc Watkins (centre), was able to hand over the Cake of the Week certificate to Cologne Bonn Airport’s Tobias Lyssy, Head of Business Development (left), and Jan Möller, Head of Business Development Marketing and Sales, during their busy meeting schedule. The prestigious award was given to the facility for the cake-tastic excellence that was presented at the launch of Pobeda’s daily services from Moscow Vnukovo. Lyssy noted to Watkins that forward bookings for the route look very encouraging. 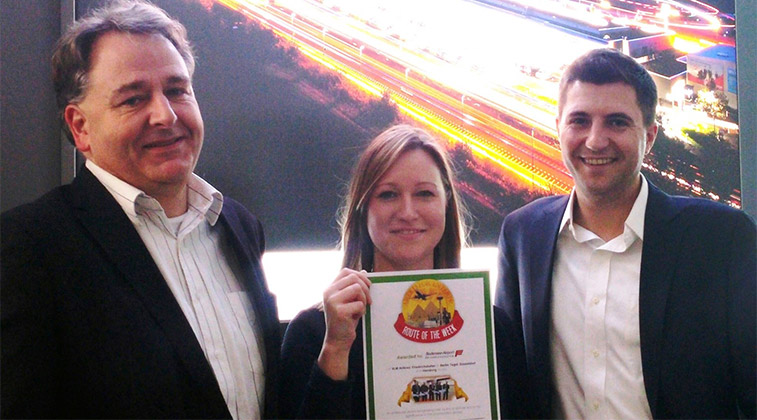 Celebrating this week with their anna.aero Route of the Week Award is Friedrichshafen Airport, which was handed the prestigious honour in recognition of the facility’s trio of new services to Berlin Tegel, Düsseldorf and Hamburg with VLM Airlines. Celebrating with the award are Friedrichshafen Airport’s: Andreas Humer-Hager, VP Marketing & Communications; Meike Hechinger, Manager Marketing; and Stefan Liebenz, Manager Marketing & Sales/Traffic Development. 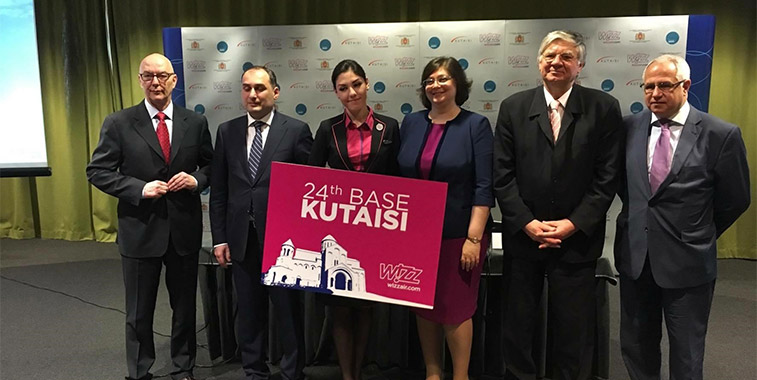 On 17 February Wizz Air announced that base #24 would be at Kutaisi Airport in Georgia, the carrier’s first base in the nation. The airline will station one A320 at the facility and open up new routes to Berlin Schönefeld (twice-weekly), Memmingen (twice-weekly), Milan/Bergamo (twice-weekly), Dortmund (twice-weekly), Larnaca (twice-weekly), Sofia (twice-weekly) and Thessaloniki (thrice-weekly). Commenting on the base announcement, Owain Jones, Wizz Air CCO said: “We are very excited about being part of the economic development of Kutaisi, not only in terms of culture and tourism, but for business and manufacturing as well. Wizz Air believes investment in Georgia with an A320 and locally recruited crew will pay economic dividends for business in Georgia and for Wizz Air.” The carrier already serves Budapest, Vilnius and Warsaw Chopin year-round from Kutaisi as well as seasonal services from Katowice. 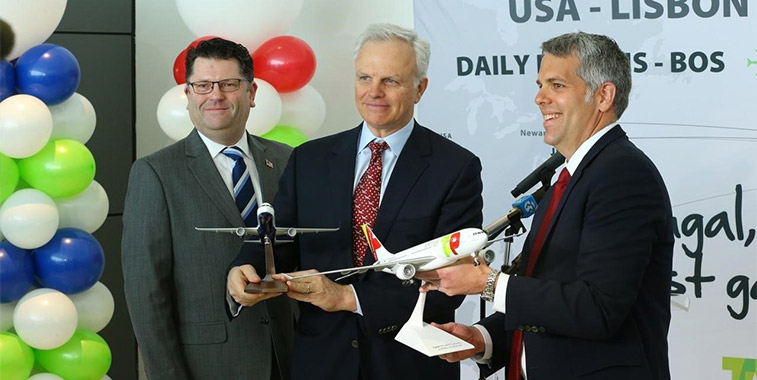 On 22 February TAP Portugal announced that it will begin direct flights from Lisbon to Boston and New York JFK. Services to Boston will commence on 11 June while flights to JFK will begin on 1 July. Both routes will be flown by the carrier’s latest A330s which are scheduled to be delivered in June. David Neeleman (centre), CEO of DGN Corp, partner in Atlantic Gateway, shareholders in TAP, said at the announcement: “Beyond the additional flights, which is important, it’s exciting that TAP Portugal is also adding new aircraft with a new cabin configuration for a much improved customer experience. Of course, on a personal level, it’s wonderful to be back at JFK and Logan and working with JetBlue again to provide easy connections from cities around the US to Lisbon.” Neeleman is known for being the entrepreneur who founded four commercial airlines including Morris Air, WestJet, JetBlue Airways and Azul Brazilian Airlines. Also in attendance at the announcement which took place at JFK’s Terminal 5 was Scott Laurence (right), JetBlue’s SVP Airline Planning, helping to unveil the two airlines’ new partnership agreement. Finally, Michael Moran (left), GM, John F. Kennedy International Airport, Port Authority of New York & New Jersey, was also in attendance to celebrate the news. 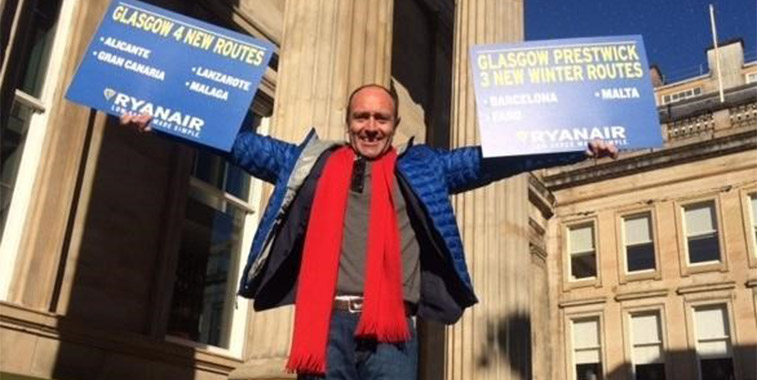 On 23 February Ryanair’s CMO, Kenny Jacobs, announced four new routes from Glasgow and a further three from Glasgow Prestwick for the W16/17 season. The larger of the city’s two airports will see the ULCC introduce services to Alicante, Gran Canaria, Lanzarote and Malaga. Prestwick will see new connections to Barcelona, Faro and Malta. Ryanair will also increase services from Prestwick to Tenerife South to four times weekly. Commenting on the news, Jacobs said: “We are pleased to launch our Glasgow winter 2016 schedule. Ryanair will deliver over 1.8 million passenger per annum and support 1,400 jobs at Glasgow and Prestwick airports.” On 23 February Emirates commenced daily A380 services to Washington Dulles. Pictured cutting the cake alongside Emirates’ cabin crew are Rob Gurney, SVP North America, Emirates, with Chris Browne, VP and Airport Manager, Washington Dulles International Airport, assisting. Journalists were invited airside to document the arrival of the aircraft into the US capital before being welcomed on-board to receive a tour as well. Emirates will use its three-class cabin configured A380s to Dulles. 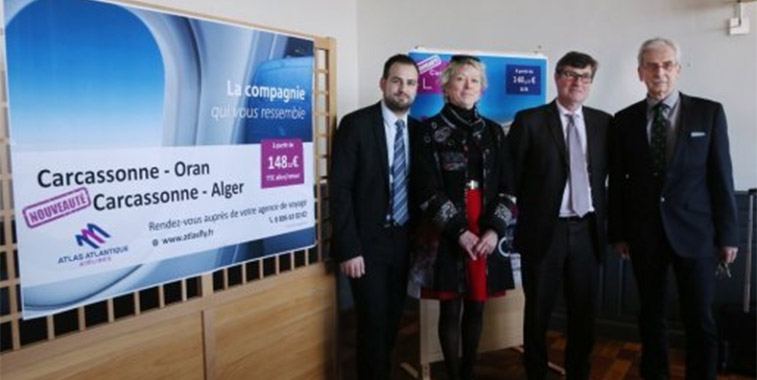 On 19 February Atlas Atlantique Airlines, a French regional airline, announced that it would commence services from Carcassonne to Algiers. Services will begin 30 March and be operated weekly on Wednesdays. The airline also confirmed that a second weekly frequency would also be added to its current Oran operation from the French regional gateway. 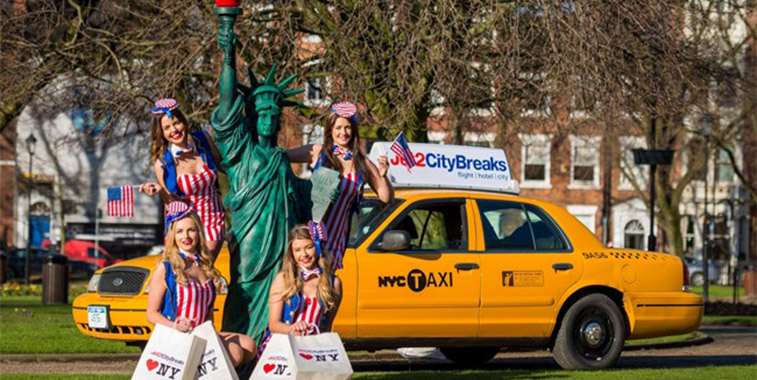 On 18 February Jet2.com, in partnership with Jet2CityBreaks, announced the return of winter seasonal services from several UK airports to New York. Flights will operate into New York Newark. The British LCC will operate 24 return trips from East Midlands, Glasgow, Leeds Bradford, Manchester and Newcastle. Steve Heapy, CEO of Jet2.com and Jet2CityBreaks said: “New York really is something to shout about, which is why we are thrilled to be able to offer customers this experience direct from five local airports. This is our most ambitious programme yet with more choice of flights and hotels than ever before. I’m sure these breaks, be it shopping, October half-term, Thanksgiving and the newly added New Year packages will be a real cause for celebration.” 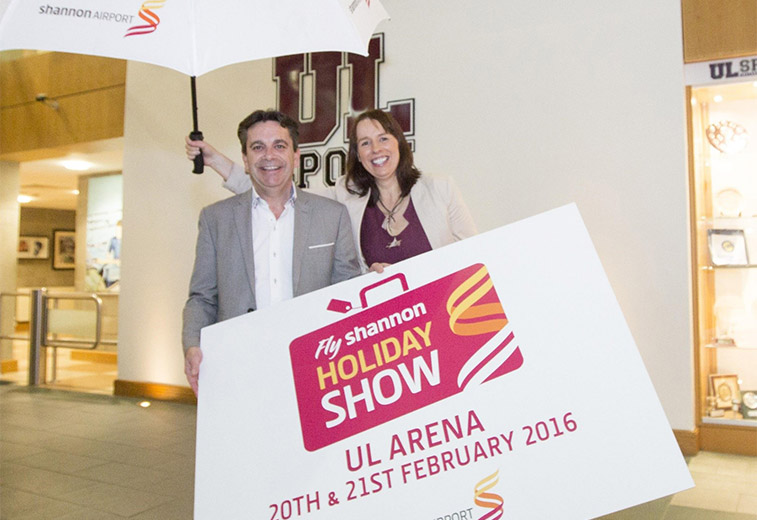 Between 20 and 21 February Shannon Airport hosted the Fly Shannon Holiday Show, which took place at the UL Sport Arena in Limerick. The show, which is the biggest holiday show in Ireland outside of Dublin, included some of the world’s leading airlines and travel agents as exhibitors. “The rain is definitely good for holidays. We were thinking it was going to keep people from attending the holiday show but I think it might have been what got so many people to come out and book their holidays here over the weekend. There were loads of discounts so that was a big lure also,” said Shannon Airport’s Head of Aviation Development, Declan Power (left). Also helping to celebrate the show along with Power is Isabel Harrison, B2B Aviation Manager, Aviation Development, Shannon Airport. 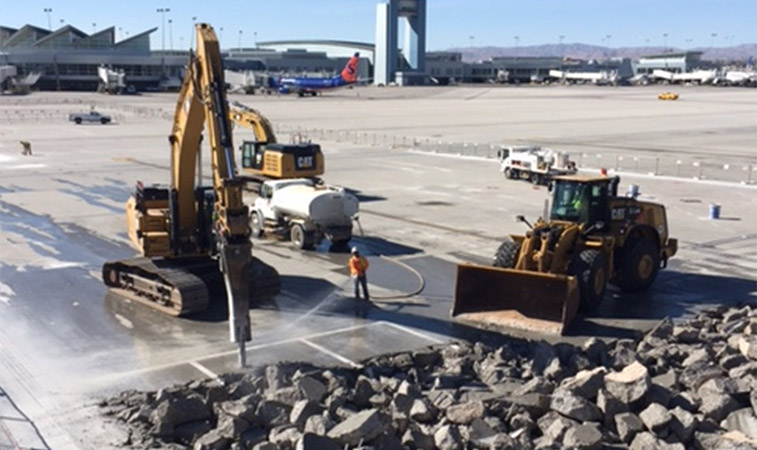 In Las Vegas, work has begun to create a 1,000-foot-long underground tunnel at McCarran Airport to connect one wing of the existing D Concourse from solely domestic/pre-cleared operations into an area that soon will offer seven gates with a sterile customs corridor. The reason for increasing the presence of international gates is due to strong traffic growth exceeding expectations in the market (70% since 2009). International traffic is particularly peak-centric at the airport, mainly on Thursday and Sunday afternoons. With this peak-centric operation, it made the option for brand new gates unsustainable at present. The airport will retrofit seven gates on its D Concourse to be able to accommodate 787s and A380s, including one gate with a dual-level jet bridge for future A380 services.