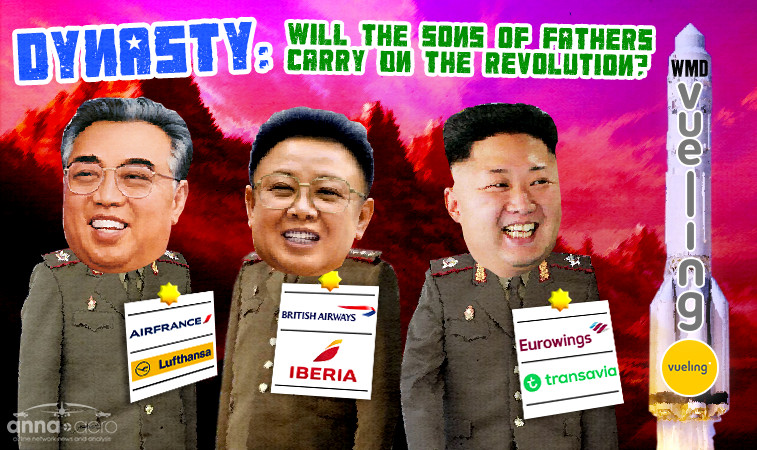 The low cost airlines owned by the majors all have strategic roles to play in their parents’ big picture – Vueling’s growth in the UK and at major European hubs, Transavia’s move into Germany, and Eurowings’ exploration of non-German bases and move into long-haul flying. (We’d like to apologise to the people of North Korea for any entirely coincidental resemblance between our characters and their god/king-like eternal dictators.)

Western Europe has three airline groups based around traditional legacy carriers. IAG, which includes British Airways, Iberia and more recently Aer Lingus; Air France / KLM, which also includes HOP!, KLM Cityhopper and Martinair; and Lufthansa Group, which embraces not only Lufthansa, but also Austrian Airlines and SWISS. However, all three groups also have lurking within them, a low-cost subsidiary, namely Vueling, Transavia and Eurowings respectively. This week anna.aero takes a closer look at these three carriers and where they are growing fastest this summer. Vueling took delivery of its first A321s last year, Transavia revamped its brand, and Eurowings started long-haul operations. All three LCCs belong to airline groups dominated by legacy carriers but will have an increasingly strategic role to play in how those airline groups evolve.

Vueling: Big in Barcelona, growing in Amsterdam, London and Paris

Vueling was launched back in July 2004 by Spanish entrepreneurs, and quickly attracted the attention of Iberia who were 20% shareholders in a low-cost rival called clickair, which began operations in October 2006. In 2008 it was announced that the two carriers would merge, which was completed in the summer of 2009 and the Vueling brand name was retained. With Iberia a major shareholder in Vueling, it was not surprising that IAG was interested in the LCC joining the group. This happened in early 2013. Vueling remains an independent carrier within IAG. Other key points: 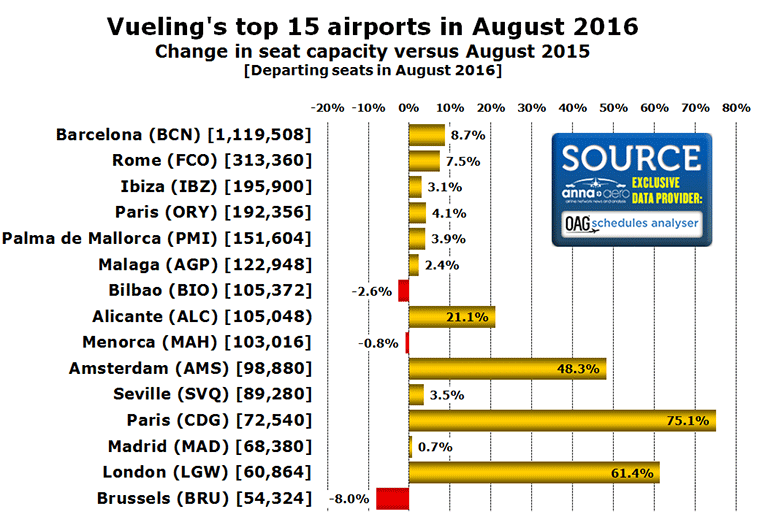 Vueling’s main base at Barcelona is almost four times as big as its next biggest airport, Rome Fiumicino. The airline’s top six airport are all reporting modest growth of between 2% and 9% this August, but three of the airline’s top 15 airports will see year-on-year growth of more than 30% in August. Paris CDG (+75%) leads the way, followed by London Gatwick (+61%) and Amsterdam (+48%). Vueling also operates from London Heathrow (to A Coruña and Barcelona) and will launch its first three routes from London Luton this summer, to Amsterdam, Barcelona and Zurich. Seven of Vueling’s top 10 airports are in Spain. 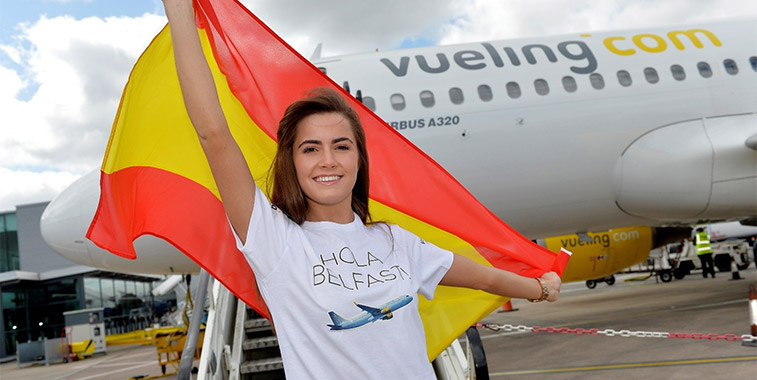 Vueling is growing fast in the UK and last May began twice-weekly flights between Barcelona and Belfast City. This summer it will start its first three routes from London Luton airport, complementing existing services from London Gatwick and London Heathrow.

Transavia: New Munich base coming in March with 18 routes

KLM’s early involvement in LCCs included the London Stansted-based buzz operation (which had evolved out of KLM UK and before that Air UK), and Basiq Air. Transavia started out back in the ‘60s as a charter carrier but then began operating seat-only services, becoming a hybrid carrier. In recent years the carrier has become focussed more on scheduled services and set up a French joint venture with Air France in May 2007. Other key points:

Nearly all of Transavia’s main airports are showing significant growth during the key peak period of August. However, this has mostly been achieved at existing airports by increasing frequencies on existing routes rather than significant network expansion, though Eindhoven’s network has grown from 17 to 23 destinations. Three Portuguese airports rank among the airline’s top 10, with the new Munich base immediately making the southern German airport the LCC’s fourth biggest. 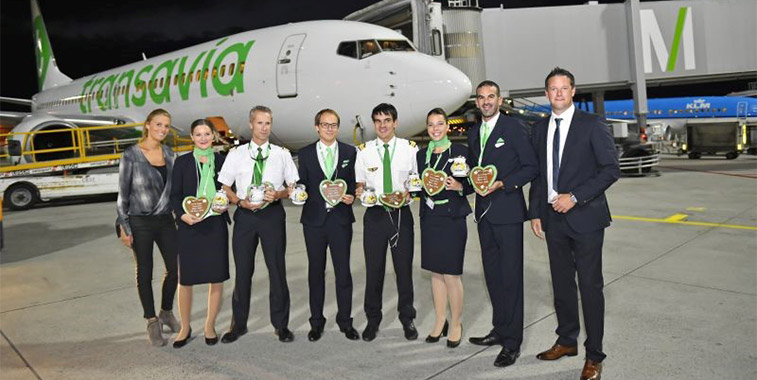 Before the airline’s base launch at the end of March, Transavia started serving Munich from Paris Orly last September. Eindhoven services to Munich started last week and a further 16 routes will begin during the summer season as the carrier creates a four aircraft base at the southern German airport.

This is complicated. Lufthansa’s involvement in the LCC market started with the creation of Germanwings in 2002. Germanwings was a subsidiary of Eurowings (which was formed in 1993 by a merger between NFD and RFG, two regional airlines), in which Lufthansa took a 25% stake in 2001. Eurowings had a mixed fleet of regional jets and Airbus A320-series aircraft. The latter were used for low-cost operations from a variety of German bases, while the former continued to operate flights for Lufthansa Regional. Lufthansa took complete control of Eurowings in 2011. Lufthansa’s decision that all non-Frankfurt and non-Munich routes should be transferred to Germanwings in 2014 meant that all the Eurowings operated services were now branded as Germanwings flights. In 2015 Lufthansa revealed that Eurowings would become the new name for all Lufthansa’s low-cost operations, including long-haul flights from Cologne Bonn and for based operations outside of Germany. Although only one brand now exists (Eurowings) flights are still operated using Germanwings’s IATA code of 4U as well as Eurowings’s code of EW. Eventually all flights will operate under the EW code. Got it? Other key points: 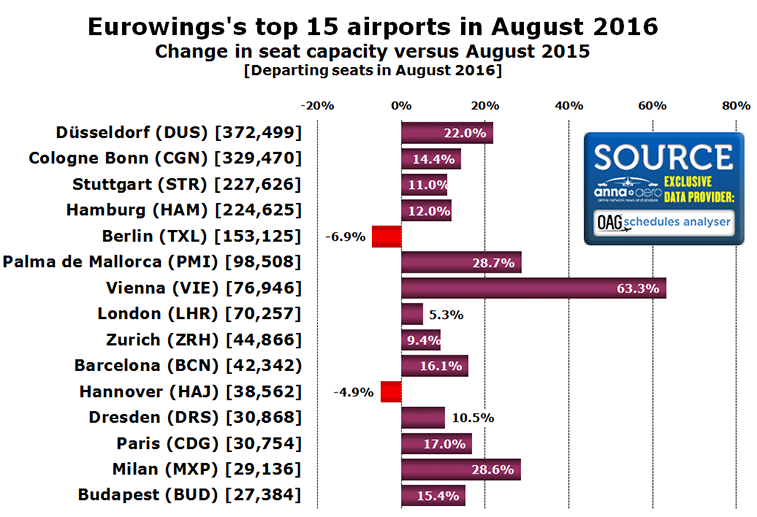 Eurowings’s top five airports are all in Germany, though only two other German airports make the top 15. The new Vienna base makes the Austrian airport the fastest-growing among the top 15 (+63%), well ahead of Palma de Mallorca and Milan Malpensa (both +29%). Among airports ranked 16th to 25th there is impressive peak summer growth at Prague (37%), Nuremberg (36%), London Stansted (33%) and Stockholm Arlanda (31%). 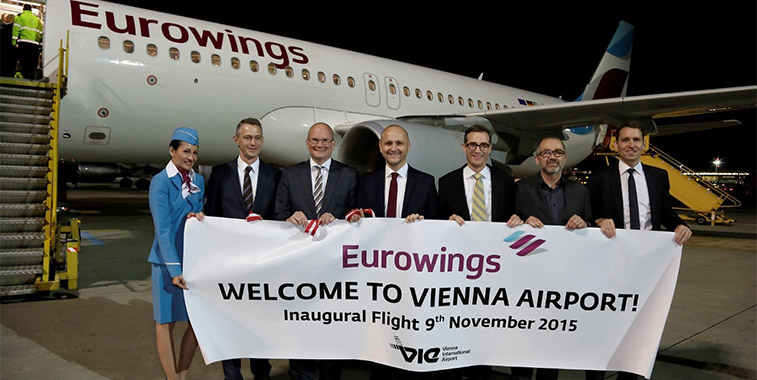 Vienna Airport was delighted to be selected as Eurowings’s first non-German base starting last November. This summer will see the carrier launch new services to Alicante, Bastia, Faro, Rome and Valencia.

Interesting times ahead for all three LCCs

Each of these carriers clearly has an evolving and strategic role to play within the larger airline groups to which they belong. Vueling’s growth in the UK and at major European hubs will be studied closely, while Transavia’s move into the German market could be considered brave. A previous move to set up a base in Denmark at Copenhagen, to take advantage of the collapse of Sterling in late 2008, was relatively short-lived. Meanwhile Eurowings is exploring non-German bases and long-haul flying while still sorting out the transfer of all operations to a single entity. Interesting times indeed.