Over 1,200 routes connect Asia to the rest of the world; Mumbai–Dubai is #1; MEB3 hub is also the number one destination from the continent 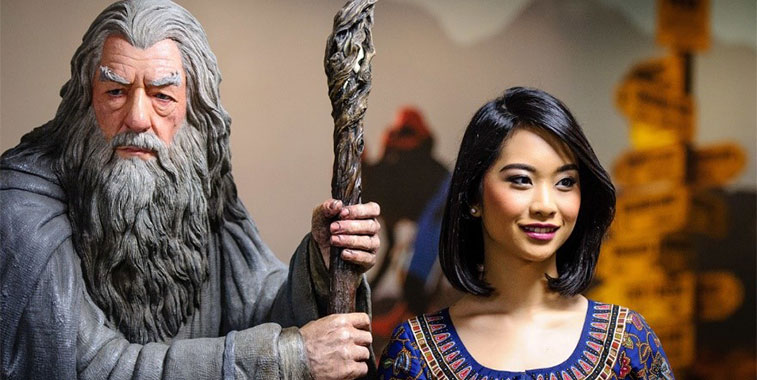 On 19 January, Singapore Airlines announced that it would commence services to Middle Earth, beginning operations on a Singapore-Canberra-Wellington route (Gandalf is really happy about that – no need to use magic to get to New Zealand anymore). The Star Alliance member will initiate a four times weekly service on the sector from September, utilising its 777-200s. During the past year, Singapore Airlines has seen its seat capacity between Asia and the rest of the world shrink by 1.0%. However the carrier remains the sixth largest carrier in the market for 2016.

According to the latest data from OAG Schedules Analyser, scheduled airline seat capacity on routes between Asia and the rest of the world (ROW) this March will be up 6.2% when compared with the same month in 2015. According to Boeing, Asia is expected to be the largest travel market in the world, growing at 6.1% annually. Asia has become one the biggest aviation markets in the world, and at the last count a billion passengers travel to, from, or within the region each year. More than 100 million new passengers are projected to enter the market annually for the foreseeable future – also according to a Boeing forecast. One factor in this growth is the region’s GDP, which is expected to grow by 4.3% annually over the next 20 years. With this in mind, anna.aero thought it would be a good idea to look into how the ROW is connecting to the continent, with many delegates also venturing to this part of the world this week for Routes Asia, which is taking place in Manila.

An analysis of the market between Asia and the ROW has shown that the number one route from the continent is the 1,937-kilometre sector between Mumbai and Dubai. Based on the week commencing 8 March, the city pair is served by a total of six carriers, with Emirates, Jet Airways, IndiGo, SpiceJet, Air India and flydubai all offering scheduled services. From an analysis of OAG Traffic Analyser data, Emirates was the number one carrier on the sector during 2015. According to the same source, the MEB3 carrier is estimated to have carried 27% of all passengers between the two cities. 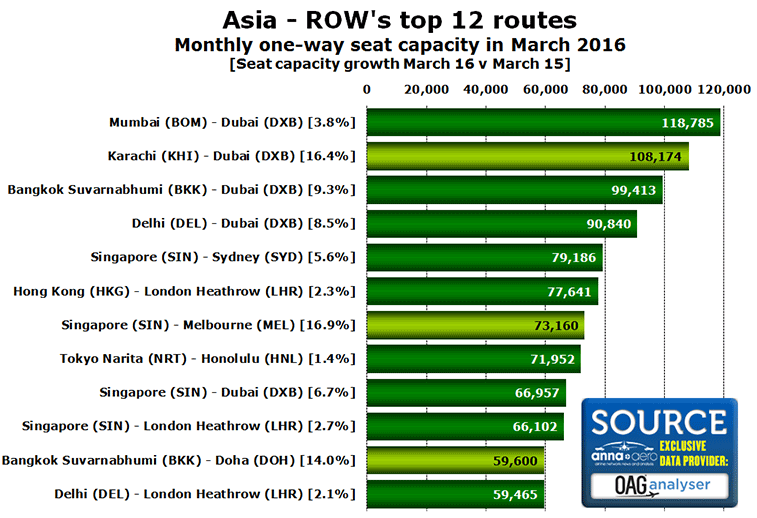 Out of the top 12 routes, three witnessed double-digit growth (highlighted above in light green). As can be seen from the top 12, Dubai features prominently, being the destination of the top four routes from Asia. Looking at the top 100 routes between the markets, Dubai features in 22 of them. In total, 1,214 routes connect Asia to the rest of the world according to OAG Schedules Analyser data, down three from the previous year.

Looking at the biggest airlines in the market, only five are based in Asia, with the rest drawn from other continents. As it did in 2015, Emirates maintains its position as the number one carrier in the Asia – ROW market, helped by an increase in seat capacity of 6.9%. The MEB3 carrier has launched multiple new routes to Asia in the last year, and on 28 March it will commence services to Cebu and Clark in the Philippines, while Hanoi in Vietnam, Yangon in Myanmar, as well as Yinchuan and Zhengzhou in China will join the network later this summer. The biggest carriers to grow outside of the top 12 are Air China and Qatar Airways, with both recording increases in seat capacity of over 18%. 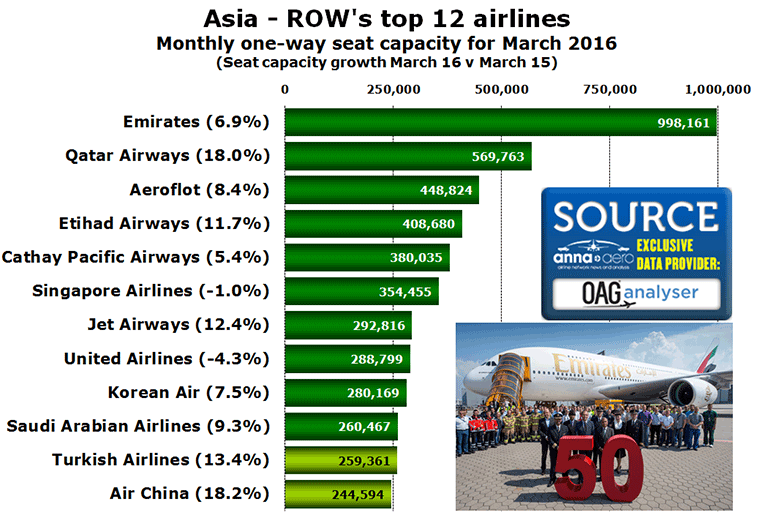 Two airlines (highlighted in light green) are new to the top 12 this year compared to last, with Turkish Airlines and Air China appearing in 11th and 12th spot, while Lufthansa and Air India have been relegated to 13th and 14th place respectively. This is due to the two new entrants to the top 12 reporting double-digit growth in the market. It should also be noted that the two airlines which they replaced both recorded growth during the past 12 months, with Lufthansa increasing its seat capacity by 0.4% and Air India by 3.6%. The latter will grow further in the market later this year, as the Star Alliance member recently announced intentions to commence services from Delhi to Vienna. The carrier has pencilled in 6 April as a start date for the route.

The MEB3 hubs of Dubai, Doha and Abu Dhabi are the top three destinations from Asia, with the latter two signifying the rise of the Middle East hub strategy in the past few years. During the past eight years, the latter two airports have overtaken London Heathrow, Moscow Sheremetyevo, Sydney, Moscow Domodedovo, Frankfurt and Los Angeles. Dubai will grow still further during 2016, helping to cement its position as the number one destination. As well as Emirates’ mentioned new routes, Air China will add services from Chongqing to the hub at the end of March. 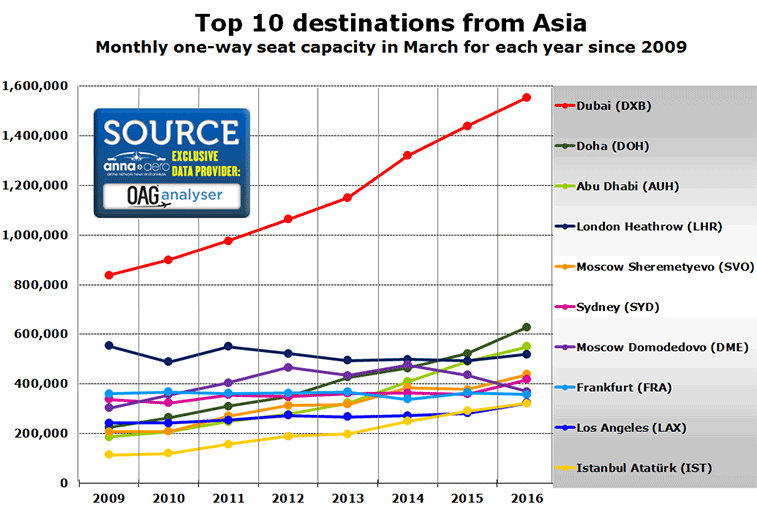 Source: OAG Schedules Analyser data for March of each year.

Heathrow and Frankfurt lose out…

Heathrow and Frankfurt are the only two airports within the top 10 destinations to see less seat capacity to Asia in 2016 than in 2009. The UK facility is down 6.4%, while the German gateway’s capacity is 1.0% lower. Three airports have recorded a growth in capacity to Asia of over 60% during the time period analysed, with Jeddah gaining 69% more seats. Abu Dhabi achieved 66%, while Istanbul Atatürk recorded a 64% growth, helped by the rapid expansion being seen by Star Alliance carrier Turkish Airlines. Apart from the two airports which have seen seat capacity decline, the only airport which did not record double-digit growth over the eight-year time period was Paris CDG, with its capacity rising by just 8.8%.

2016 is looking to be a promising year in regards to new routes connecting to Asia. One of the most significant is from the Chinese carrier Hainan Airlines, which from June will connect Beijing to Manchester, the first time a scheduled service to China has been offered from an airport outside of the UK capital. The carrier has also announced flights to Calgary and Tel Aviv from Beijing, both launching this summer. On the other side of the world, Singapore Airlines will commence operations to its third destination in New Zealand (after Auckland and Christchurch) when it starts services to Middle Earth on a Singapore-Canberra-Wellington route. Cathay Pacific Airways, the largest Asian carrier in the market, will further grow its European connections this year with services to Madrid and London Gatwick from its Hong Kong hub. Elsewhere, Austrian Airlines will start a connection between Vienna and Shanghai Pudong on 6 April, while China Eastern Airlines will start connections to Chicago O’Hare and Prague from the Chinese city within the next six weeks. 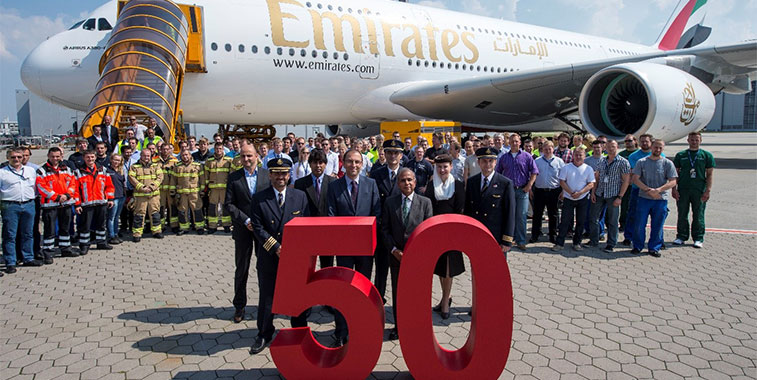 Emirates remains the number one carrier in the Asia – rest of the world market after achieving a growth in seat capacity between the two of 6.9% during the past 12 month period. One factor which has helped Emirates to achieve the feat is due to it being the largest A380 operator in the world, using its flagship aircraft to various destinations throughout Asia. The next Asian gateway that will see the MEB3 carrier initiate A380 services to is Taipei Taoyuan from 1 May.