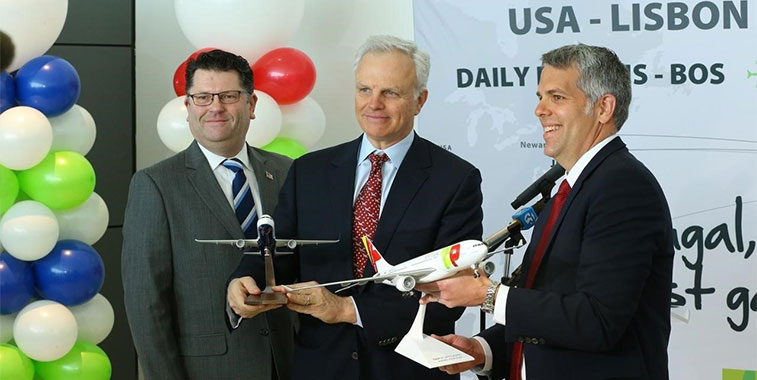 On 22 February, TAP Portugal announced that it will begin direct flights from Lisbon to Boston and New York JFK starting this summer using new A330s which will be delivered in June. The US currently ranks outside of the top 12 of leading country markets from Portugal, with Brazil and Angola the leading non-European destinations served non-stop from Portugal’s main airports.

Last year, passenger numbers across Portugal’s three biggest airports at Faro, Lisbon and Porto rose by almost 11% to 34.6 million. This is the second year in a row that these airports combined have reported double-digit growth, good news for VINCI Airports who took over the running of 10 airports in Portugal in February 2013 by acquiring ANA, the local airport operator. Between 1996 and 2015 demand has tripled across these airports, though growth rates have varied with Porto seeing a fourfold increase in passengers, Lisbon traffic more than trebling, while Faro has witnessed an 83% increase in passengers. Traffic fell by less than 1% in 2001 and 2002 and by 3.2% in 2009. However, with growth of 8.1% in 2010 traffic in Portugal recovered quickly from the global recession of 2009. Apart from in the last two years, double-digit growth has also been achieved in 1998, 1999 and 2007. 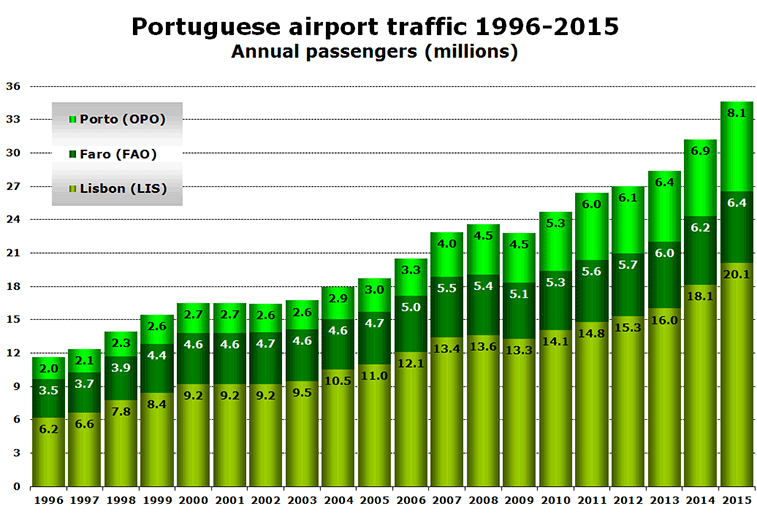 Lisbon and Porto both have similar seasonality profiles, with SVID (Seasonal Variation In Demand) scores in 2015 of 3.68 (“good”) and 4.64 (also “good”). However, Faro’s focus on inbound tourism means that the airport scores a high 36.63, with peak summer demand of over 900,000 passengers in July and August, six times higher than that reported in January, of just over 150,000. 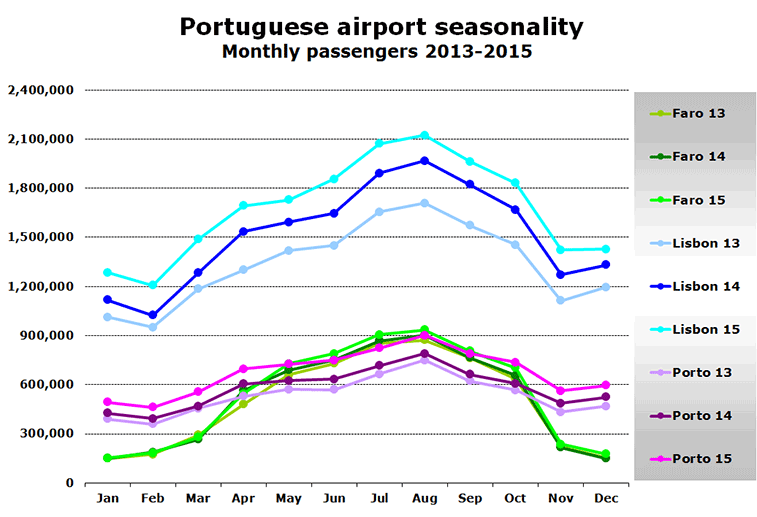 TAP Portugal still #1; Ryanair capacity has more than doubled since 2010

With passenger growth of 40% in the last five years it is revealing to look at which airlines have been the main generators of the additional capacity. According to OAG Schedules Analyser data scheduled seat capacity has grown by 26% between 2010 and 2015. The faster growth in actual passenger numbers can be explained by an increase in average load factors. This makes sense as the majority of the capacity growth has come from LCCs, who tend to have higher average load factors than legacy carriers on short-haul routes. 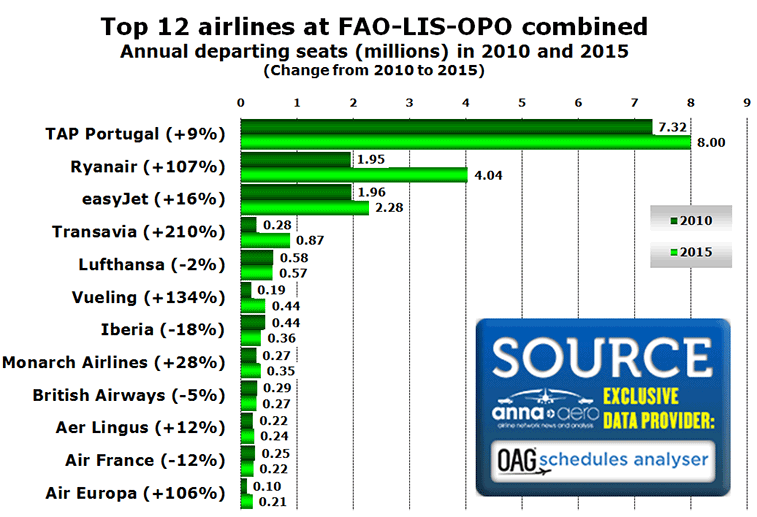 Looking at the top 12 airlines for scheduled seat capacity in 2015 and comparing with 2010 reveals that three LCCs (Ryanair, Transavia and Vueling) have each more than doubled their capacity at Portugal’s busiest airports. On the contrary, four legacy carriers (Air France, British Airways, Iberia and Lufthansa) have all seen a decline in seat capacity during that period of between 2% and 18%.

Ryanair made Porto a base in 2009, followed by Faro in the summer of 2010, and finally Lisbon in April 2014. It also opened a base at Ponta Delgada in the Azores in March 2015. easyJet has bases at Lisbon (opened in April 2012) and Porto (last summer), though since 2010 overall seat capacity has only grown by a relatively modest 16%, well below the airline’s overall growth during the same period. While growing its network at Lisbon from 15 routes in S10 to 20 in S16 it has had a few failures; routes to Barcelona, Bilbao, Copenhagen, Rome, Toulouse, Valencia and Venice have been suspended in the last five years.

A look at the leading country markets from Portugal’s top three airports reveals that the UK still remains the country market with the highest annual scheduled seat capacity. However, France has overtaken both Portugal and Spain to claim second place, with a significant increase in capacity of 45% since 2010. Belgium, Germany, Ireland and the Netherlands have all seen capacity growth of over 40% in the last five years, with only Spain experiencing a drop, of 8%. The only non-European destinations in the top 12 country markets are Brazil (7th) and Angola (12th). The US ranks just outside the top 12, though it may climb the rankings in 2016 with the recent announcement by TAP Portugal of new services to Boston and New York JFK starting this summer. 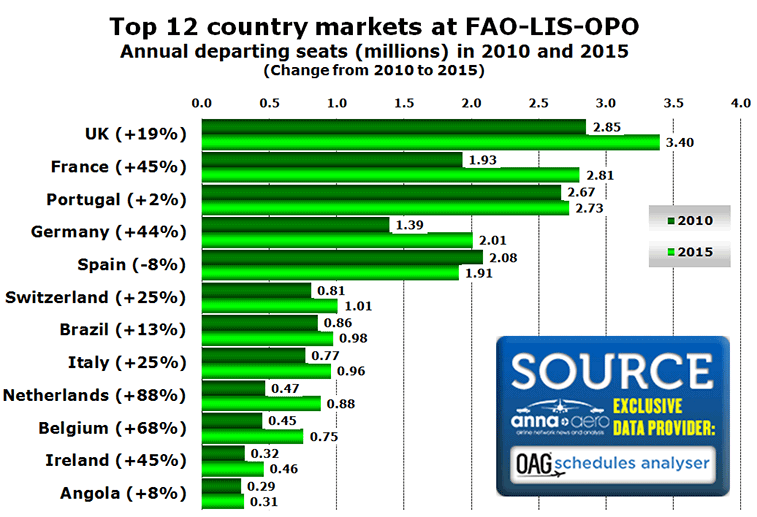 A closer look at which airlines are introducing new routes this summer reveals that several airlines will be launching flights to Portugal for the first time. Aegean Airlines begins Athens to Lisbon flights on 3 June, NIKI introduces Vienna to Faro flights on 12 March, while Volotea ventures into Faro from three French airports starting in April. Blue Air is resuming flights between Bucharest and Lisbon, which it last operated in S13, while British Airways CityFlyer is introducing weekly flights from London Stansted to Faro from the end of May. UK hybrid carrier Monarch Airlines will be increasing its presence in Portugal. It already serves Faro from five UK airports, but will this summer introduce flights to Lisbon from Birmingham, London Gatwick and Manchester.

Apart from TAP’s recent decision to grow its US network from Lisbon (it currently serves Miami and New York Newark), United Airlines will begin a new seasonal service from Washington Dulles in May to complement its existing year-round Newark service. United and TAP are, of course, both members of the Star Alliance. Finally, it is worth noting that while Qatar Airways now serves more destinations non-stop than Emirates, the Dubai-based carrier is the only one of the MEB3 to currently serve Lisbon, with a daily service. On 1 April 2014, Lisbon Airport welcomed the launch of Ryanair’s 65th base, and the ULCC’s third in Portugal after Porto (September 2009) and Faro (March 2010). A fourth Portuguese base opened at Ponta Delagado in the Azores last summer.