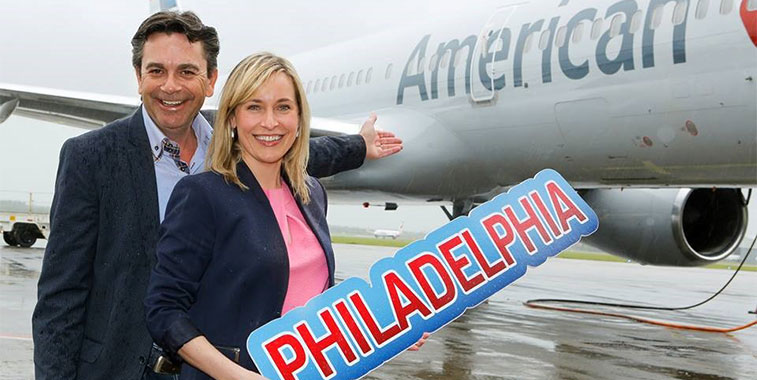 On 8 May last year, Head of Aviation Development, Shannon Airport, Declan Power, and Fiona Noonan, Account Manger Ireland, American Airlines, celebrated the arrival of American’s first service from Philadelphia, taking over from US Airways’ seasonal operation on the route. American Airlines increased capacity on the service to the Irish gateway by 58% during 2015. Since the merger of the two carriers, Philadelphia has become American’s sixth largest base.

With American Airlines and US Airways having both completed their merger in October of last year, the result has meant that Philadelphia (second largest hub for US Airways in 2015) is the sixth largest airport for American operations this summer. Since the merger, the newly formed operation has resulted in a rise in seat capacity from Philadelphia of 5.8%. According to OAG Schedules Analyser data, American commands 73% of monthly seats from Philadelphia this summer, with the second largest carrier being Southwest Airlines with just 7.2%. In total the hub is served by 12 scheduled airlines.

American Airlines’ previous routes are in the top 12

According to OAG Schedules Analyser data, before the full merger of American and US Airways had taken place, the oneworld member served only four routes from Philadelphia, namely Dallas/Fort Worth, Miami, Chicago O’Hare and Charlotte Douglas. After the merger in October, it is evident that these four routes remain in the carrier’s top 12 from Philadelphia. It should be noted that the four were also part of US Airways’ top 12 routes from the hub last year. 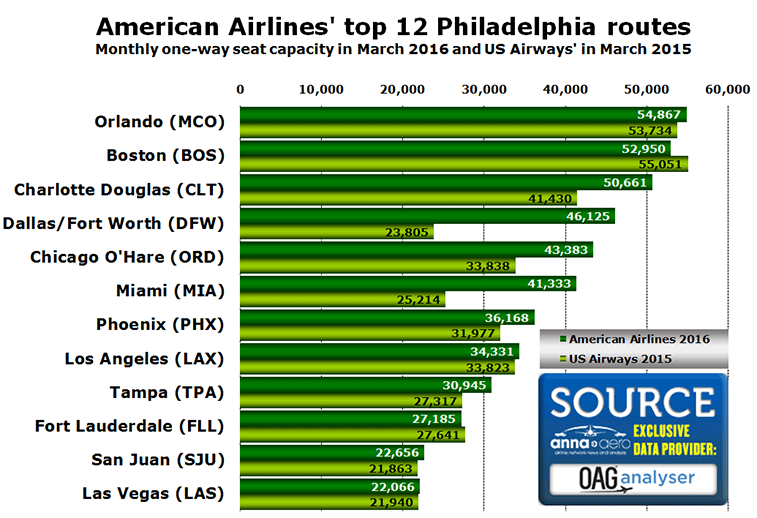 Analysing the top 12 routes from Philadelphia for American, it is evident that the original routes it served from the Pennsylvanian airport have seen different outcomes. The worst performing route of the top 12 when comparing American and US Airways’ operations together is Chicago O’Hare, with its seat capacity down nearly 14%. American last summer had 31% of seats between the two carriers on the 1,088-kilometre sector to the Windy City. Dallas/Fort Worth has also suffered a chop in seats, with its capacity down 3.9%. Miami is up 0.5% after the consolidation of the two carriers, with Charlotte Douglas up 8.4%. Of the routes that have been transferred to American as a result of the merger, only two in the top 12 have recorded double-digit growth, with Phoenix and Tampa both up by nearly 12%.

Looking at the top 12 routes for US Airways last year, two have not made it into American Airlines’ top 12 for 2016, with Atlanta and Pittsburgh losing out to San Juan and Las Vegas. Seat capacity to Atlanta is down 16%, placing the destination as the 13th most popular this year, while Pittsburgh has shrunk 45%, meaning it is now the 22nd largest route. Orlando, which was US Airways’ largest route from Philadelphia remains the number one route after the merger, witnessing an increase in capacity of 2.1%. The number one long-haul route for American from Philadelphia is London Heathrow (26th largest route), which has seen its seat capacity grow by 25% since it has been inherited from US Airways. Another long-haul route which has seen strong growth is Shannon, with American increasing capacity to the Irish gateway by 58% compared to the seats available when US Airways operated the route. In total, American operates to 120 destinations from Philadelphia this summer, of which 17 are in Europe. The one long-haul route that has been lost since last year’s merger is Tel Aviv.

Looking at American’s routes from Philadelphia this summer and examining the leading routes in terms of ASKs (Available Seat Kilometres), which takes into account sector length, frequency and aircraft size, reveals that the US domestic market is the most dominant from the Philadelphia. Only three of the airline’s top 12 routes from the hub are to Europe (highlighted in light green). Two of the top 12 routes are in Florida, with the remaining being in either central and western US or the Caribbean. 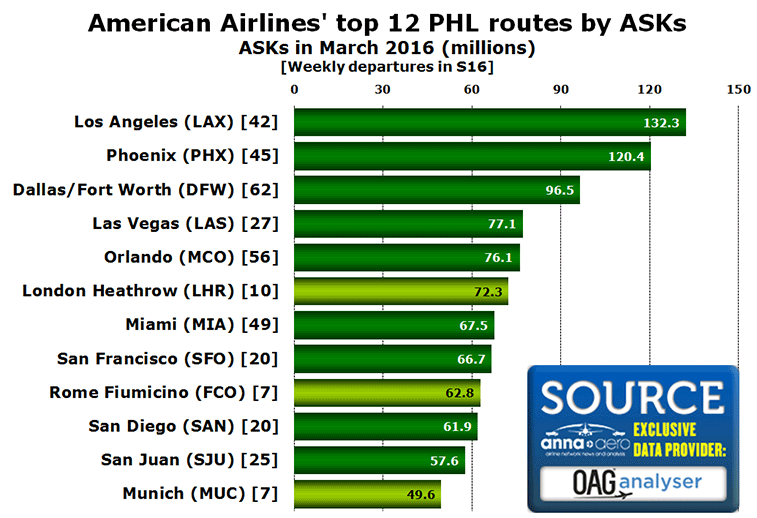 No new routes planned for 2016

Taking a look at anna.aero’s New Route database, American currently has no plans to commence new services from Philadelphia for S16 or W16/17, although services to Austin-Bergstrom, a route which was operated by US Airways, will recommence on 5 April. 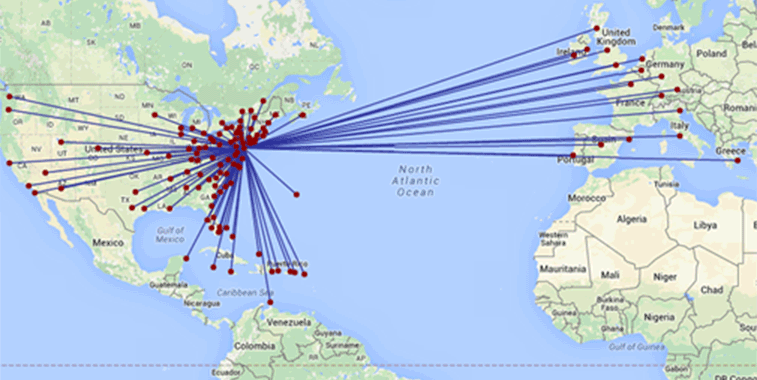 The route map above shows American Airlines’ routes from Philadelphia during S16. According to anna.aero’s New Route database, the oneworld member currently has no new scheduled services planned from its sixth largest base for the rest of this year.