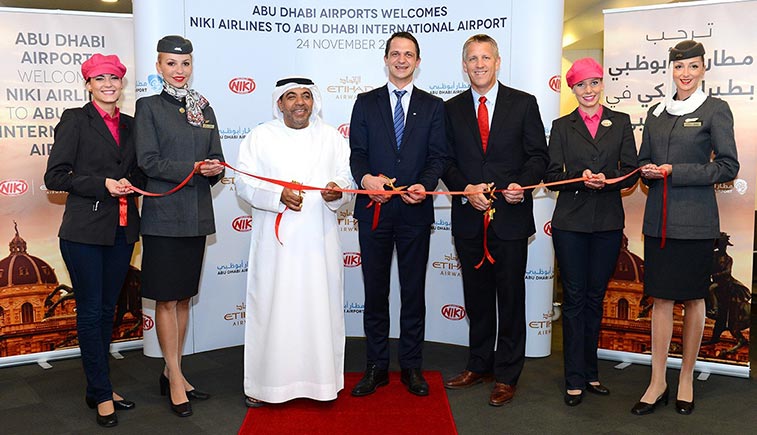 Back in November 2014 it came as no surprise when NIKI began flights from Vienna to Abu Dhabi, in co-operation with Etihad Airways, a major shareholder in airberlin, NIKI’s parent company.

Vienna-based NIKI (named after its founder, legendary racing driver Niki Lauda) is now a fully-owned subsidiary of Germany’s airberlin, currently operating a fleet of 20 A320-series aircraft. Unlike its German parent company with its multiple business models and aircraft types, the Austrian carrier adheres to more of the principles of a proper low-cost carrier (LCC). Launched back in May 2004, its operations have been concentrated at Vienna, though a number of ‘summer sun’ destinations are also served from other Austrian airports, notably Graz, Linz and Salzburg.

According to analysis of OAG Schedules Analyser data, this summer the carrier will be serving 52 destinations non-stop from Vienna, the same as last summer. However, this hides the fact that five sectors have been dropped as summer route (to Agadir, Athens, Marrakech, Munich and Tel Aviv) while five new services will be starting this summer; to Dubrovnik, Faro, Funchal, Menorca and Split. Funchal and Menorca have both previously been served by NIKI from Vienna. Agadir and Marrakech will continue to be served as seasonal winter routes.

NIKI’s 230 weekly departures this summer from Vienna give it just over 11% of seat capacity at Vienna, well behind Austrian Airlines which accounts for 46% of seats. However, parent company airberlin has a further 5% of seats thanks to its 110 weekly flights to five German airports (Berlin Tegel, Düsseldorf, Hamburg, Hannover and Nuremberg). Lufthansa and Eurowings/Germanwings have roughly 8.5% of seats, which means that between them, Lufthansa Group (which also owns Austrian Airlines and SWISS) and airberlin are responsible for around 71% of seat capacity in Vienna.

Analysis of the airline’s leading routes as measured by ASKs (Available Seat Kilometres) which takes into account sector length, frequency and aircraft size, reveals that 13 of NIKI’s top 15 routes are from Vienna, with the remaining two (shown in bright green) both routes to Palma de Mallorca. NIKI’s top route from Vienna is also to Palma de Mallorca (served with 20 weekly flights), followed by Abu Dhabi, Barcelona and Malaga. Seven of the top 15 routes involve Spanish destinations. 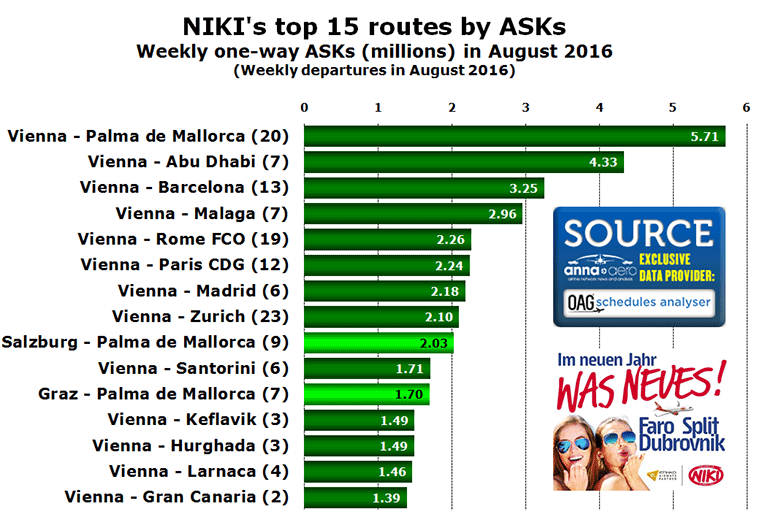 These top 15 routes account for around 52% of all of NIKI’s flown ASKs this summer. Significant destinations that NIKI has flown to from Vienna in the past but which are no longer served (apart from those already mentioned) include Belgrade, Copenhagen, Frankfurt, London Stansted, Milan Malpensa (flights were moved to Milan Linate), Sofia and Warsaw.

In December 2014, NIKI revealed plans to serve Brussels and Palma de Mallorca from Bratislava in Slovakia, located just 50 kilometres from Vienna. Service was supposed to start in April 2015 but it seems that airberlin pulled the plug on these plans as they never materialised. There was also talk of operating scheduled services between Bratislava and Vienna, which would have made it one of the world’s shortest international flights, but this also never happened. Meanwhile, Ryanair has been serving Palma de Mallorca from Bratislava since S10 and began its own flights to Brussels on 1 April 2016.

Another plan that failed to live up to expectations was the airline’s experiment with operating smaller 100-seat Embraer E190s. According to OAG data, NIKI operated up to seven of these aircraft between May 2009 and May 2015, before reverting to an all-Airbus fleet. According to Airbus data, there are no further new aircraft waiting to be delivered to the carrier thought it is always possible that airberlin could supply additional aircraft from its own fleet if necessary.

Though founder Niki Lauda is no longer involved in the airline that carries his name, he has recently returned to the aviation business as the new owner of Amira Air, a business jet operator based in Vienna. The enterprise has recently been re-named LaudaMotion and operates a fleet of 14 Bombardier business jets. 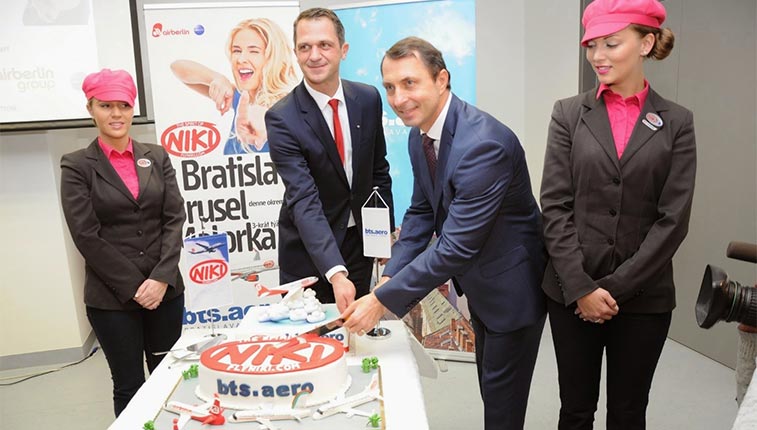 This impressive cake was baked and presented in December 2014 to celebrate the planned launch of NIKI services from Bratislava in Slovakia (just 50 kilometres from Vienna) to Brussels and Palma de Mallorca in 2015. However, the routes, which were scheduled to start in April 2015, never materialised.