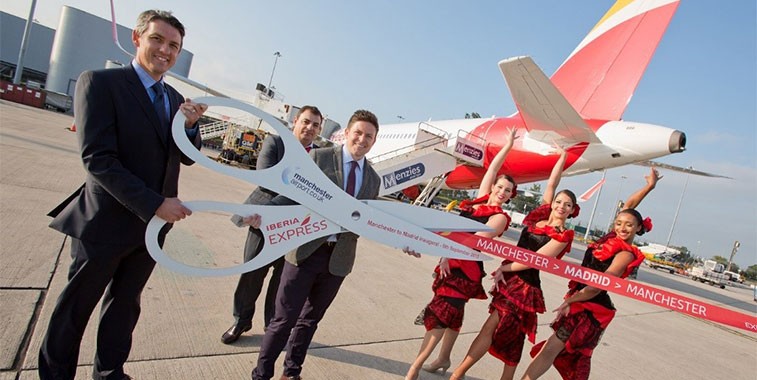 Helping Madrid to achieve its impressive 11.9% growth in passenger numbers last year was the launch on 8 September of Iberia Express’s new service to Manchester, seen here being celebrated on the apron of the UK airport.

This year should see Spanish airports handle a record number of passengers. Last year saw passenger demand grow by almost 6%, and if that growth rate is maintained, in 2016 the country’s airports will process around 220 million passengers, finally breaking the record set in 2007 of just over 210 million. Since then, the country has endured an economic slump, but tourists are once again flocking to the Iberian Peninsula, especially in light of on-going concerns in other popular tourist destinations in and around the Mediterranean.

Between 1999 and 2007 air traffic demand had seen passenger numbers rise by 63%, with growth above 7% in six of the eight years. Since then demand levels have been less predictable, though there has now been solid growth in each of the last two years. 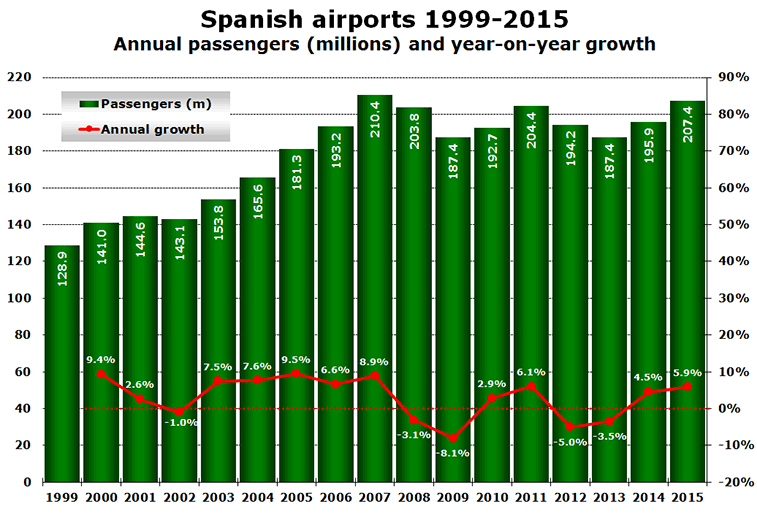 Spain has 20 airports which handled more than one million passengers in 2015 with Madrid and Barcelona leading the way, ahead of Palma de Mallorca. Among the top 15 airports, Madrid was also the fastest-growing last year, with passenger numbers up almost 12% to just under 47 million, confirming the airport as Europe’s sixth busiest. 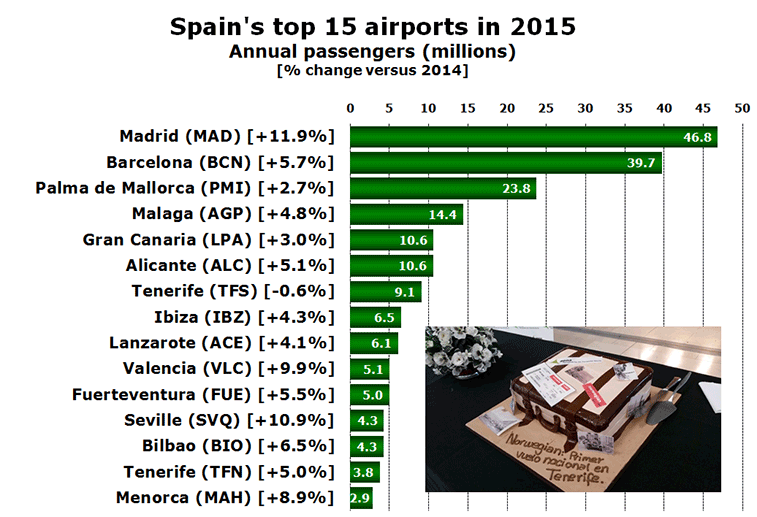 Seville was the only other airport in the top 15 to report double-digit growth last year (+10.9%), while Tenerife South was the only airport to see a small reduction in demand, with passenger numbers down less than 1% to just over 9.1 million. Outside of the top 15, Reus (-17.1%) and Girona (-17.8%) reported the biggest drop in passengers, while La Palma saw growth of 12.6%, taking it within touching distance of the one million passenger mark.

Ryanair and Vueling battling for supremacy 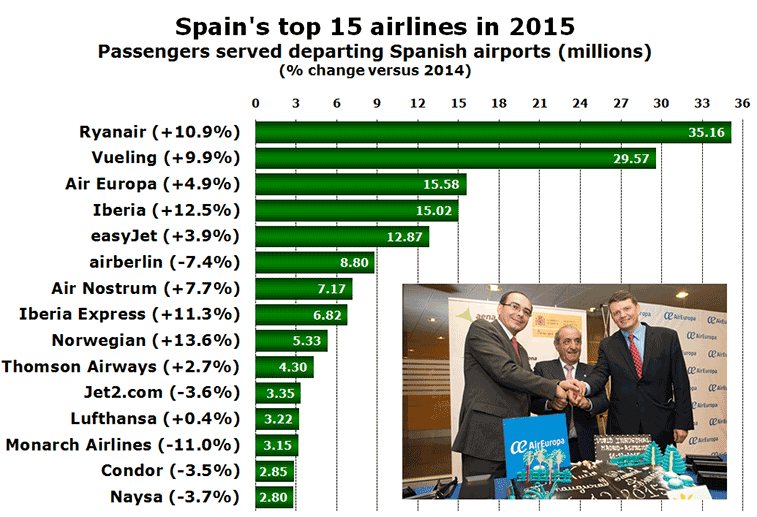 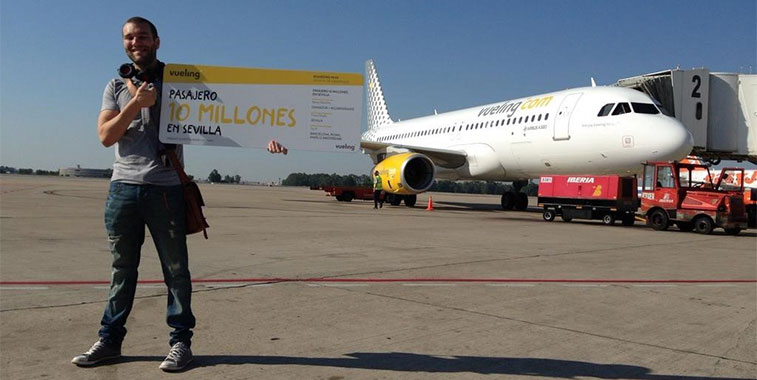 Last June Vueling reached the 10 million passenger milestone in Seville. The airport was the second fastest-growing airport among Spain’s top 15 airports in 2015 reporting growth of 10.9%, beaten only by Madrid’s 11.9% growth. This summer Vueling will operate 18 routes non-stop from Seville including a new service to Tenerife South starting in June.

Looking ahead to this summer and analysing OAG schedule data shows that during the peak month of August Vueling and Ryanair are evenly matched. Ryanair is growing faster than Vueling in Spain this summer and will be helped by the opening of two new bases, at Santiago de Compostela and Ibiza. UK leisure airlines would appear to be focussing on Spain once again, with Thomson Airways (+15.6%), Jet2.com (+18.1%), Monarch Airlines (+11.8%) and Thomas Cook Airlines (+36.7%) all reporting double-digit capacity growth this August. However, airberlin’s capacity continues to decline, though that has more to do with the airline’s on-going business restructuring rather than a lack of demand from German travellers. Note that Iberia Express is not included separately in this analysis as the marketing airline is Iberia and so its capacity data is included with the parent company. The same also applies to Air Nostrum. 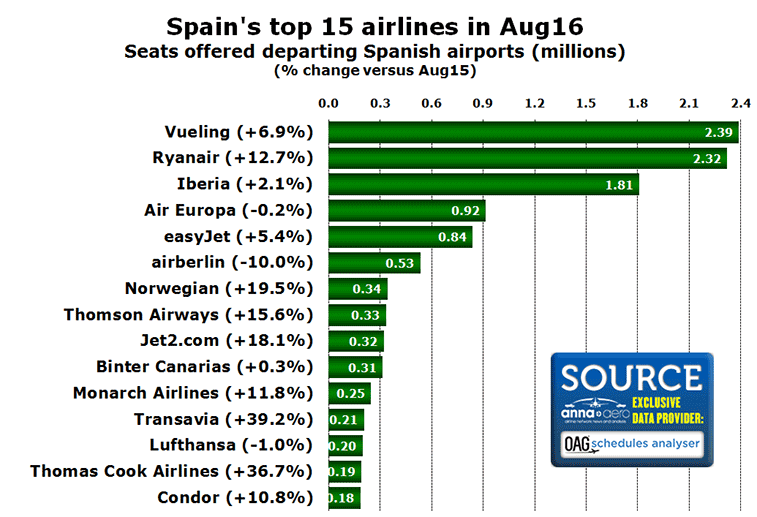 While overall growth at Spanish airports last year was 5.9%, the domestic market grew slightly faster at 6.1%. The top two international markets of the UK (+4.3%) and Germany (+2.3%) both grew at well below the overall average. However, the next two international markets of Italy and France both generated double-digit growth. Norway was the only one of the top 15 country markets to report a fall in passenger numbers, explained by the impact of falling energy prices on the country’s economy and the knock-on effect on the demand for holiday travel. The Irish and Portuguese markets also showed growth in excess of 10%, but the fastest-growing market among the top 15 was Poland, with passenger numbers up 27% in 2015. 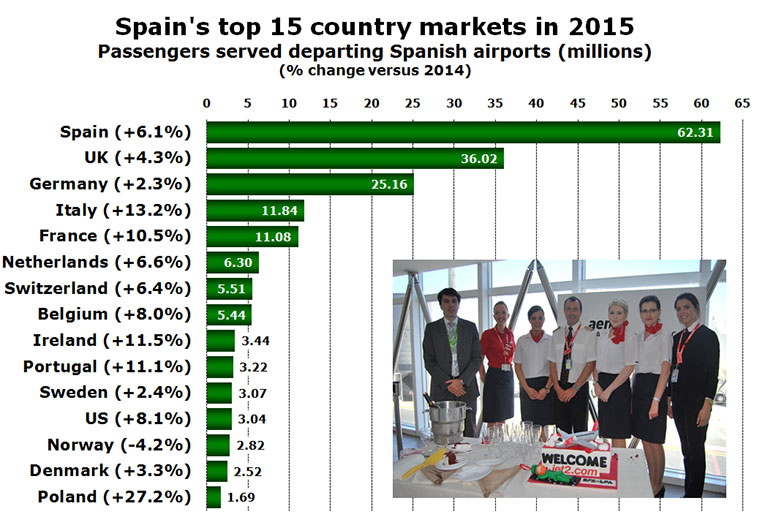 Again, looking ahead to this summer in terms of available scheduled seat capacity, the fastest-growing country markets look set to be the UK (+19%), Netherlands (+20%), Ireland (+22%) and Denmark (+32%). In contrast, during the first week of August, the Italian and French markets will only see capacity growth of between 1% and 2%. 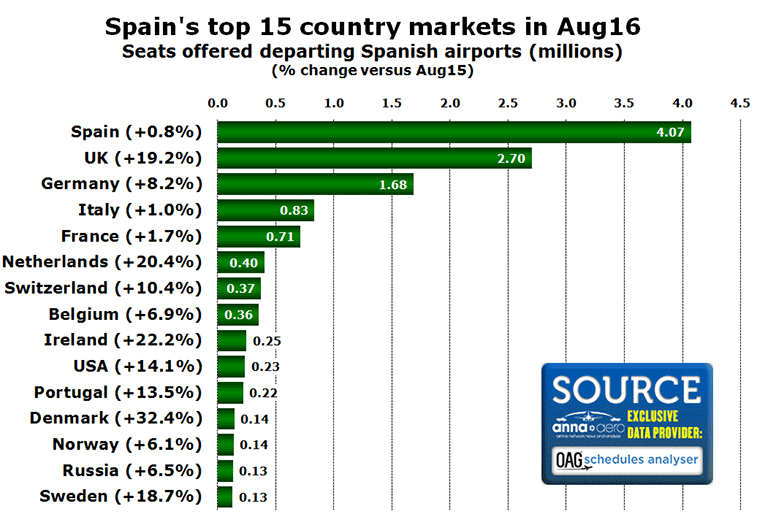 Whether this significant growth in UK capacity is related in any way to concerns about how the UK Pound to Euro exchange rate might develop if the UK were to vote in June to leave the EU is unclear. However, given that since last summer the value of the Pound has fallen from around 1.4 Euros to currently just under 1.3 it would seem that Spain is going to be more expensive for UK tourists this summer than it was last. That said, back in the summer of 2013 the Pound was worth under 1.2 Euros. 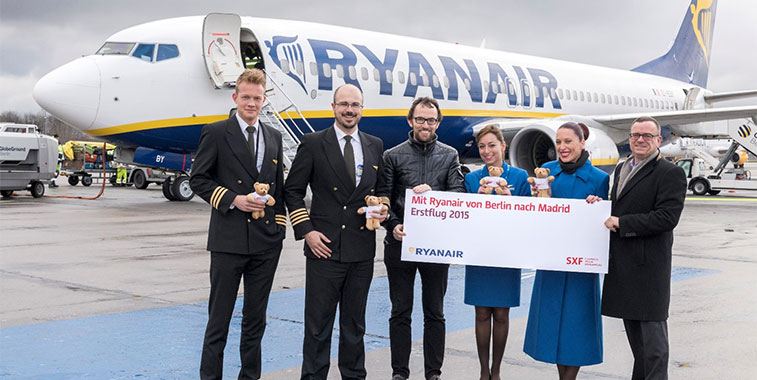 As part of Ryanair’s growth in Germany the ULCC began a double-daily service from Berlin Schönefeld to Madrid on 29 March 2015. Ryanair’s significant growth at Madrid last summer was another major factor in the country’s biggest airport managing to report such impressive growth in 2015.