Last September, Wizz Air started serving its third German route from Vilnius, to Memmingen in Bavaria. The German airport celebrated the launch of the twice-weekly service in its own traditional way. Memmingen joined Dortmund and Frankfurt Hahn, helping to make Germany the #3 country market for Wizz Air from Vilnius, after the UK and Norway.

Wizz Air opened its base in Vilnius, the capital of Lithuania, on 16 April 2011 – the venue for this week’s CONNECT route development conference. As it approaches its fifth anniversary at the airport it is set once again to become the airport’s biggest airline this summer, operating more weekly scheduled flights and offering more weekly scheduled seats than either of its nearest rivals, Ryanair and airBaltic. From nine destinations in the summer of 2011, Wizz Air’s route network has now reached 23 destinations, while the number of weekly departures has more than trebled during the same period from 23 to 74. 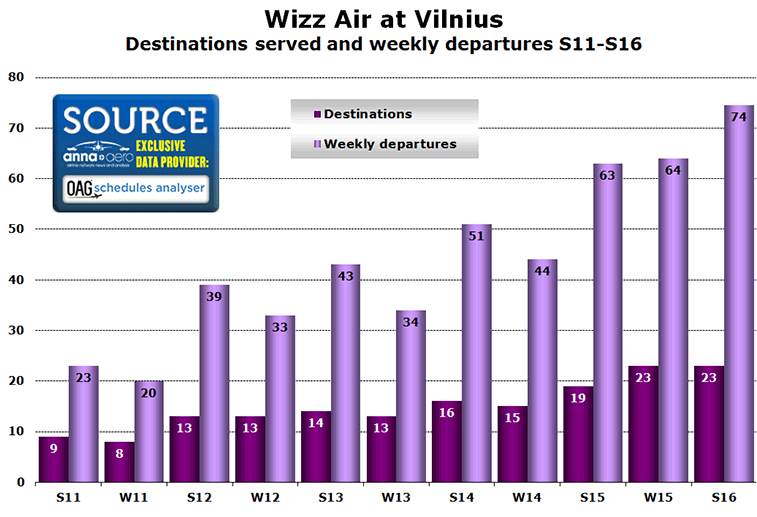 A total of 27 routes have been started of which 23 will be operating this summer. The four destinations that have failed to provide a satisfactory return to the airline are Corfu, Cork, Liverpool and Trondheim. Stockholm Skavsta services lasted just six weeks when launched in 2011, but resumed last September. The 23 routes this summer are spread across 13 countries, with four destinations served in both Norway and the UK. Only London Luton is served with more than five weekly flights. In fact, the UK leads the way for weekly frequencies with 23, well ahead of Norway with 11, Germany (eight) and Italy (seven).

Of these, the most recent route additions are Billund, Glasgow and Memmingen which were all launched last September, each with just two weekly flights. The longest sector, by some distance, is the 2,626-kilometre route to Tel Aviv, which ranks as Wizz Air’s 12th longest route anywhere on its network, some way behind the 4,022-kilometre route between Budapest and Dubai Al Maktoum.

Ryanair competes head-to-head on routes to Barcelona, Frankfurt Hahn, Milan/Bergamo and Paris Beauvais, and indirectly on Wizz Air’s routes to London, Oslo and Rome. Ryanair is turning up the heat further with the addition of its own service from London Luton to Vilnius starting on 2 April, while Vueling will start to compete with both of these carriers on the Barcelona route from the end of June. This is all further evidence of growing competition between the PELOCO5 carriers. In addition, airBaltic competes indirectly on the Stockholm route, while Lufthansa, Norwegian and SAS also compete indirectly on certain routes.