Ryanair makes Vilnius its second Lithuanian base; Prague and Sofia strong contenders to be next hubs 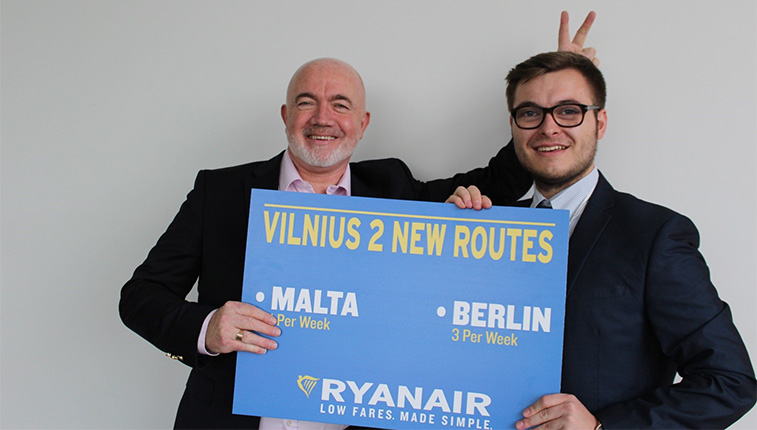 On 15 March at the Radisson Blu hotel in Vilnius, David O’Brien, CCO of Ryanair, announced that from 30 October the carrier will open its #82 base in the Lithuanian capital. The announcement means that Ryanair will have two bases in the country, with its other being Kaunas where the airline also has an MRO base. Seen announcing the carrier’s new services from Vilnius to Berlin Schönefeld and Malta is O’Brien and anna.aero’s Assistant Editor Jonathan Ford.

This week the CONNECT conference has been taking place in Vilnius, with many of Europe’s airlines and airports meeting to discuss future air services. The conference therefore seemed like the perfect opportunity for Europe’s largest carrier Ryanair to announce its newest base, which will be located at the Lithuanian capital’s airport, its #82 base and second in Lithuania after Kaunas.

On 15 March at the Radisson Blu hotel in Vilnius, David O’Brien, CCO of Ryanair, along with Arune Jaraite, Sales and Marketing Executive, Ryanair, announced that from 30 October the carrier will base two of its 737-800s at the city’s airport, with two new routes being opened to Berlin Schönefeld (thrice-weekly) and Malta (weekly). The ULCC also confirmed that its new routes to Birmingham and London Luton, which launch within the next few weeks, will be continued into the winter season as well, while services to Milan/Bergamo will be increased to five times weekly. Commenting at the launch O’Brien stated that: “This winter Ryanair will have four aircraft based in Lithuania, two in both Vilnius and Kaunas. Traffic to Vilnius with Ryanair will grow by 16% this year and we expect to carry 1.5 million passengers to and from Lithuania in 2016, of which 860,000 will be from Vilnius.” In total Ryanair will operate 15 routes from Vilnius including Dublin, Liverpool, London Stansted, Paris Beauvais, Madrid, Barcelona, Rome Ciampino, Brussels Charleroi, Frankfurt Hahn, and Bremen as well as those to Birmingham, Luton, Berlin Schönefeld, Malta and Milan/Bergamo.

Lithuania is doing it right

Once the initial details of the new base had been presented, O’Brien then went on to explain why Lithuania is doing better than its Baltic counterparts in regards to route development. “The Lithuanian Government is doing a lot better than Latvia in regards to understanding the needs of passengers and airline charges. They realise that costs should be low in order to allow passengers to afford to fly. We have seen Latvia and Norway introduce and increase taxes for flying, and that will hurt travel demand due to the increased costs for their passengers.”

Although the highlight of the announcement was growth in Vilnius and Lithuania overall, O’Brien did state that there may be a reduction in passengers at Kaunas. “Ryanair’s new services to Malta and Birmingham are being moved from Kaunas, so we will see a slip in passenger numbers. The reason for the move to Vilnius for these routes is due to the new route incentive scheme that Lithuanian Airports has introduced at Vilnius. However, when the charges by the company become more calibrated across all its airports we will return to growth at Kaunas. Without Ryanair Kaunas would be empty. It has a great terminal facility and long runway so we are making use of this great infrastructure.” It should be noted however that later this month Kaunas will welcome its second scheduled carrier Wizz Air, which will launch services to London Luton in direct competition with Ryanair.

As well as announcing based operations in Vilnius, O’Brien also highlighted other key developments for the carrier from Lithuania, including the launch of flights to its third destination in the nation, Palanga. Starting 29 March, the LCC will commence services to the Lithuanian airport with a twice-weekly service from London Stansted, which is expected to carry 33,000 passengers in the first year. When asked about how the route was performing in regards to ticket sales, O’Brien stated: “Palanga is performing better than we expected and so we hope that it is the start of more things to come from the airport.”

Prague or Sofia next…

With Ryanair it is always hard to predict where it will open their next base. This week at CONNECT, anna.aero’s Ralph Anker highlighted that the majority of Ryanair’s growth this year is from capital city airports, falling in line with the carrier’s ‘new’ strategy of offering more weekly flights on routes, as well as operating to more primary European airports. When asked about where the carrier’s next base will be, O’Brien stated: “We have seen big developments recently in the Eastern Europe market, particularly in Romania and Bulgaria. I can’t see it being long before we announce more bases in this part of the world. It is more than likely that we will have aircraft based in Prague and Sofia before too long, however I cannot say for certain when.” With both of these being capital cities, it reiterates the new strategy behind Ryanair’s network development. 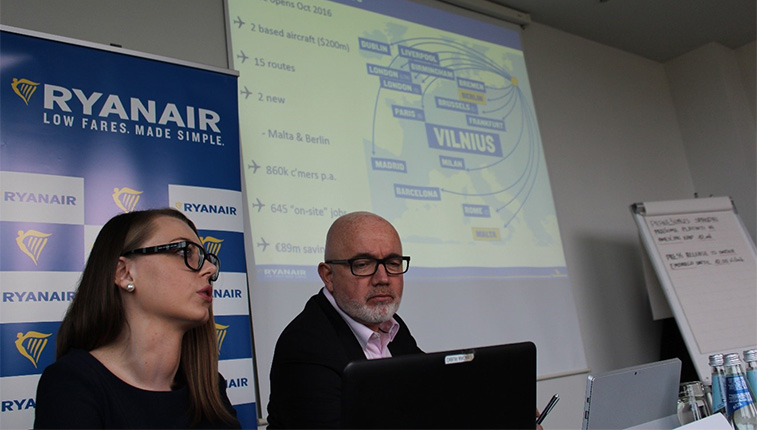 Arune Jaraite, Sales and Marketing Executive, Ryanair and David O’Brien, the carrier’s CCO announce to the press the news that the airline will launch its #82 base at Vilnius Airport with initially two-aircraft from 30 October and new routes to Berlin Schönefeld and Malta.