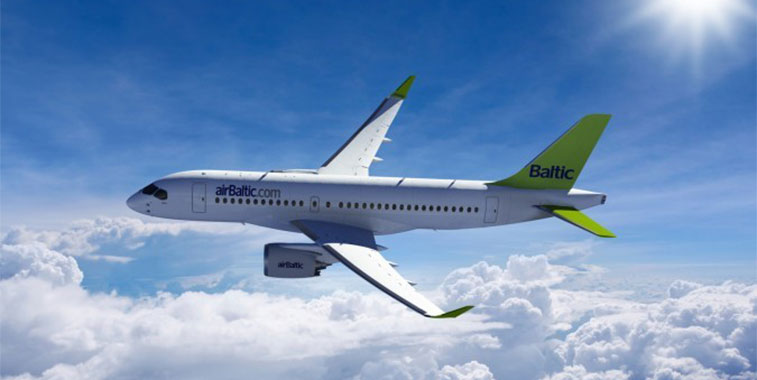 airBaltic, the leading airline in the Baltics, will receive the first of 13 firm orders for Bombardier CS300 aircraft in the second half of 2016. They will be used to replace the airline’s dozen 737s (a mix of -500s and -300s). airBaltic’s closest rivals in the region are Ryanair and Wizz Air.

With a combined population of around 6.2 million people, the Baltic States of Estonia, Latvia and Lithuania cover an area roughly half the size of Germany. The capital cities of each nation (Tallinn, Riga and Vilnius respectively) are each served by a single major airport. Apart from these airports, the only others in the three countries to have significant scheduled services are Kaunas and Palanga, both of which are in Lithuania. In 2001, the three main airports combined served fewer than two million passengers per annum. Last year, the same three airports handled just under 11 million passengers. Between 2001 and 2004 there was little to choose between Riga, Tallinn and Vilnius in terms of demand, but since 2005 Riga has pulled into a clear lead thanks to the growth of airBaltic. In 2009, Riga was handling three times as many passengers as either of the other two airports. However, since 2010 Riga has experienced relatively modest growth (just 11%) while Vilnius’s traffic has increased by almost 150% and Tallinn’s is up by almost 60%. If we include Kaunas and Palanga in the traffic statistics, then the airports of the Baltics handled a total of just over 11.5 million passengers last year. For comparison, among individual airports across Europe, that would fit in between Warsaw (11.2 million) and Nice or Prague (both with 12.0 million passengers). 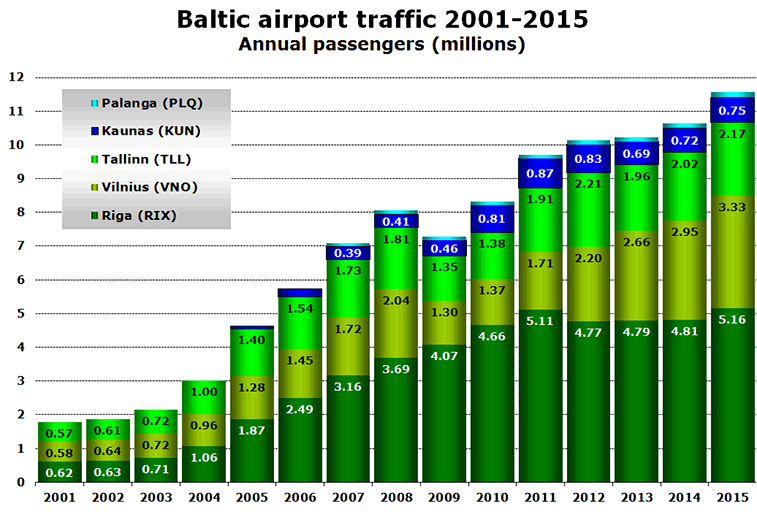 Using passenger data for 2015 we can compare the seasonality profiles of the three main airports. All three rate “Good” on anna.aero’s SVID (Seasonal Variation in Demand) calculator, but Vilnius (4.10), just beats Riga (4.27) and Tallinn (5.71) for having the lowest score. Tallinn’s profile last year was not helped when the national carrier, Estonian Air, ceased operation in early November. 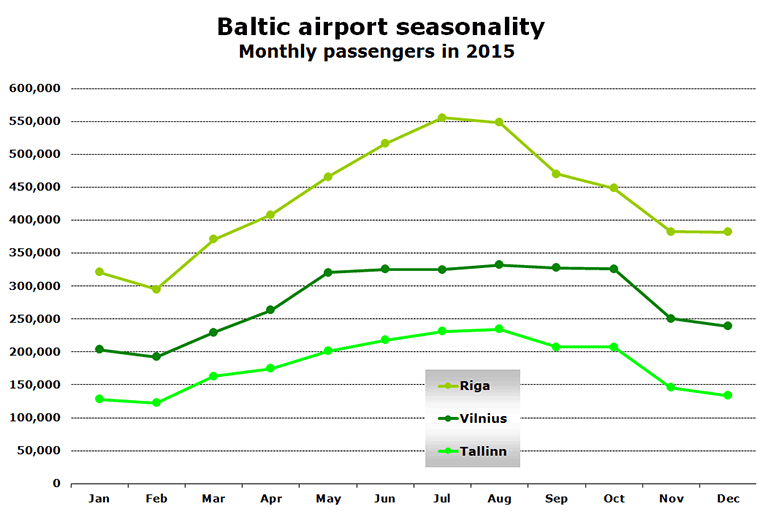 In terms of scheduled seat capacity in 2015, airBaltic was the leading carrier thanks to its Riga hub. However, it is also among the top three carriers at both Vilnius and Tallinn. The government-owned airline recently announced a new major shareholder, a German investor who has purchased a 20% stake in the airline for 52 million Euros. The carrier will also be the launch customer this summer for Bombardier’s CS300 series aircraft, which will be used to replace the carrier’s 12 existing 737-500s and 737-300s. airBaltic also has 12 76-seat Q400s which it uses on regional routes and which replaced Fokker 50s which the airline had been operating since late 1998.

Ryanair is a clear second with a base at Kaunas as well as operations from Riga, Vilnius and Tallinn. This summer will see the ULCC also launch flights from Palanga to London Stansted. The Irish ULCC will have a two-aircraft base at Vilnius for the start of W16/17, with an announcement made during the recent CONNECT conference. Third-ranked Wizz Air has a base in Vilnius, a presence at both Riga and Kaunas and will also start Palanga flights this summer, but to London Luton. 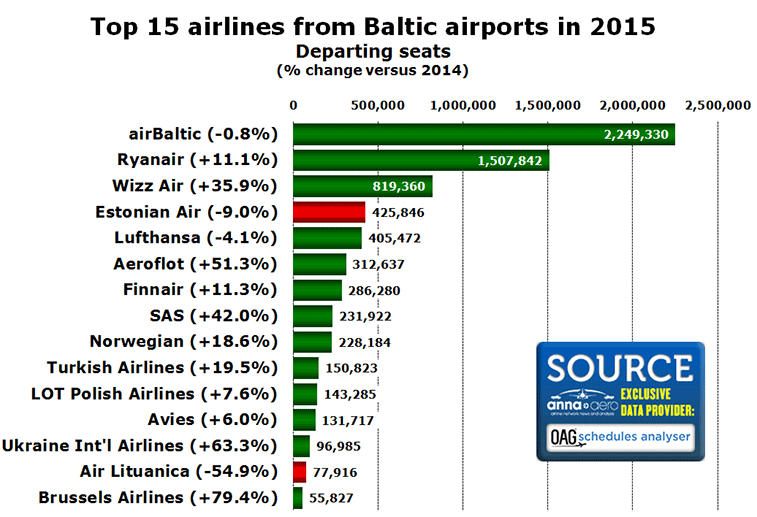 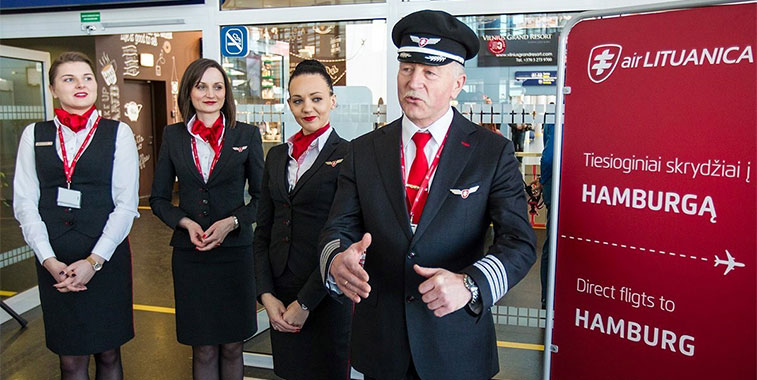 On 30 April 2015, Air Lituanica launched flights from Vilnius to Hamburg. Sadly, less than a month later, the airline ceased operations after offering scheduled flights for just under two years.

Sadly two of last year’s top 15 airlines both ceased operations during the last 12 months with Lithuania losing Air Lituanica and Estonia losing Estonian Air. While the Estonian government quickly set up a replacement company, Nordic Aviation Group (with the assistance of Adria Airways), Lithuania has not. Given that in the last few years the country has seen the demise of flyLAL (in January 2009), Star1 (in October 2010) and now Air Lituanica (which launched in June 2013), the issue of whether the country can really sustain a national flag-carrier needs to be considered carefully. Given that (much-larger) near neighbours Denmark, Norway and Sweden ‘share’ a flag-carrier suggests that something similar may be appropriate for the Baltic States.

According to OAG data for 2015, a total of 30 scheduled airlines operated at least 20 flights into one or more of the Baltic States airports. Among those outside of the top 15 are Aegean Airlines (linking Athens with Tallinn), easyJet (serving Tallinn from London Gatwick), and SWISS (connecting Zurich with Riga), as well as another airline that is no longer operating, Transaero Airlines.

The leading country markets from Baltic airports for scheduled services in 2015 were UK and the Germany, with little to choose between them. Both also reported almost identical increases in seat capacity compared with 2014. Each of the Baltic countries (shown in bright green) appears in these rankings as there are links between each of them. The four Nordic nations (shown in pale green) are ranked fourth to seventh, with Norway having a significant lead over the other three countries, and may move past Russia into third place in 2016. 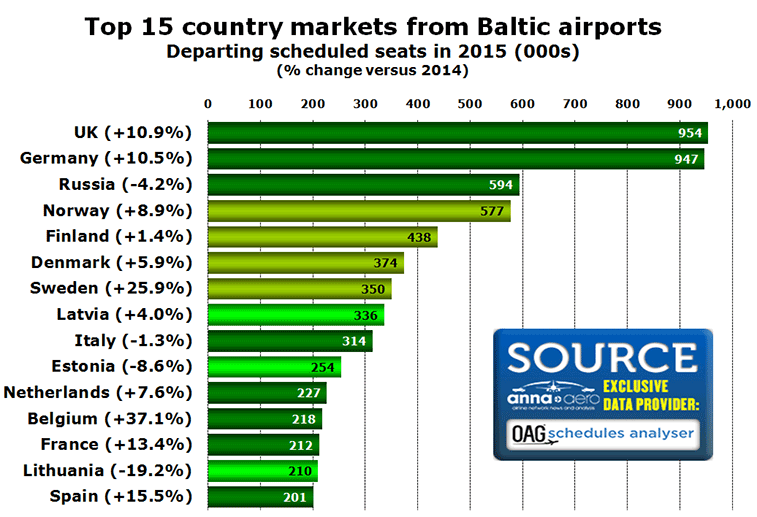 Apart from the two previously mentioned new routes to London from Palanga, the following routes have been announced as starting this summer from the Baltic airports:

Nordica is the recently revealed new brand name for the airline that has so far been operating as Nordic Aviation Group with the help of Adria Airways’ AOC with flights also being operated by bmi regional and NextJet. 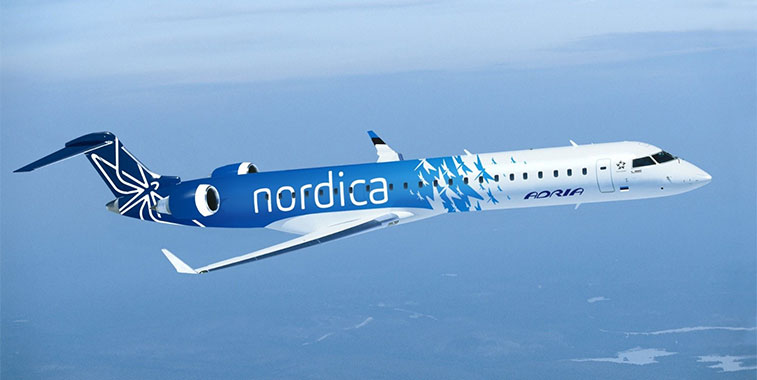 Nordic Aviation Group recently released images of their new “nordica” brand which they plan to introduce from the end of March. The CEO of the design agency (Optimist) which came up with the dragonfly-based design explained: “The dragonfly is a mystical and beautiful creature that cannot be found everywhere and that looks like a high-tech miracle. The dragonfly’s sleek body resembles a plane and its flight is fast and controlled. In many cultures, the dragonfly is also the symbol of good fortune.” So now you know.