Tokyo-Siem Reap is Skyscanner “Unserved Route of the Week” with 110,000 searches in 2015 – a trunk route for Jetstar Japan? 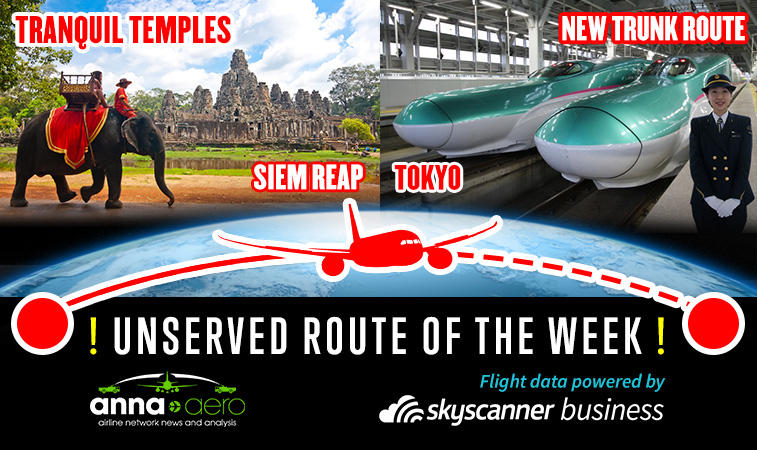 A potential new route from Tokyo to Siem Reap, has been identified as the Skyscanner for Business-anna.aero “Unserved Route of Week”, the latest great unserved new route opportunity revealed by the cooperation between anna.aero and the B2B branch of the Skyscanner.net consumer flight comparison site. This new kind of analysis harnesses the amazing power of the aspirational data captured from Skyscanner.net‘s +50 million unique visitors per month. This particular analysis was created using the Skyscanner Travel Insight product. 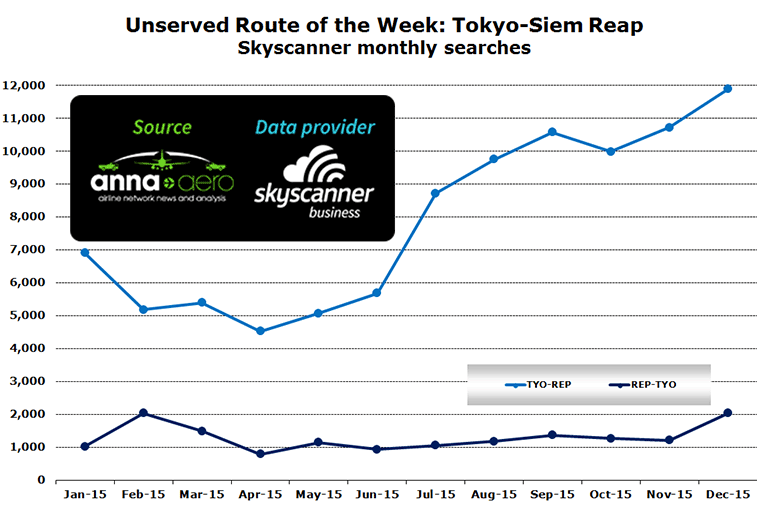 Siem Reap is Cambodia’s most visited tourist attraction famous for the Angkor temples. In this instance the Skyscanner results strongly suggest it is a really sought-after destination by Japanese tourists looking for a direct service. Perhaps it would make an ideal four or five times weekly sector for Jetstar Japan, adding to its route to Manila, which launched with a five times weekly service on 15 March; the low cost carrier’s network from Tokyo Narita now comprises 12 routes.

A Tokyo-Siem Reap route should also appeal to All Nippon Airways (ANA), although the Star Alliance carrier currently does not operate any services between either of its Tokyo hubs and Cambodia (in fact, according to OAG schedule data, there are currently no services from any Japanese city to Cambodia!) An ANA service would also benefit from substantial feed at the airline’s significant 40-destination hub operation in Narita, or from Tokyo Haneda, where the airline serves 57 cities.

From the other end of the route, Cambodia Angkor Air is launching a four times weekly A321 services from Phnom Penh to Seoul Incheon on 17 April, as well as Siem Reap to Dan Nang, Vietnam, on 1 July, so clearly this this rapidly expanding airline is in fast-growth mood this summer.

When using the Skyscanner searches as an indicator, bear in mind that there are other significant search volumes that could also be added to the total – from dedicated airline websites, competitive search engines etc. If anything, this underlines the value of the Skyscanner data as a conservative indicator of significant market route demand – especially when the numbers are high as they are in the case of the 110,000 searches for Tokyo-Siem Reap in 2015.

When looking at the last year of searches, the busiest month (TYO-REP and REP-TYO combined) for potential traffic flows is December 2015 with nearly 14,000 searches, over 8,500 more than the lowest monthly figure, which was recorded in April 2015 (5,300). The seasonality profile of this search data is slightly less extreme than last week’s Unserved Route of the Week (Brisbane to Beijing), with the low-month traffic representing 38% of the highest month. According to OAG Traffic Analyser, because there is no direct service, the top three connecting options chosen by those passengers which did book travel between Tokyo and Siem Reap in 2015 were Hanoi (26%), Ho Chi Minh City (24%) and Bangkok Suvarnabhumi (10%). In fact, 20 different intermediate airports were used as stops between the two cities.

An O&D that is not served by a non-stop flight will typically display a low purchase rate and low traffic. In this instance Skyscanner’s Travel Insight indicates a monthly average of just 11.8% for the Tokyo to Siem Reap route (see graph below). Therefore, if there was a Tokyo-Siem Reap route, and if bookings performed in line with the “Skyscanner market average” for direct services at both airports (12.9%), the airline operating this route could immediately expect an improved purchase rate of 9.3% without any increased marketing spend. However, with 110,000 annual searches, the potential city pair should already be very sustainable. 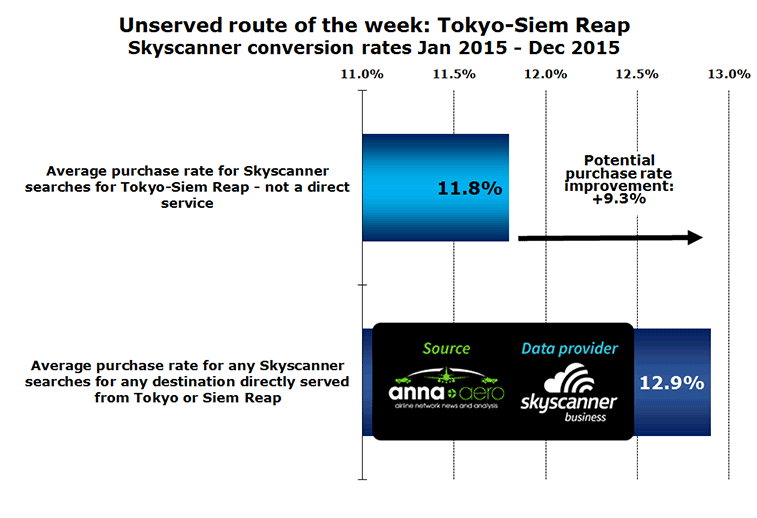