On 15 March Cork Airport heralded the start of services to Leeds Bradford with a traditional route launch cake, the second cake the airport has created this week. The day previous, the facility celebrated the launch of flights to Southampton by the same carrier with another culinary creation. Flights to Leeds Bradford will operate thrice-weekly on Tuesdays, Thursdays and Saturdays, facing no direct competition. Leeds Bradford celebrated the start of services by Aer Lingus Regional to Cork on 17 March – St. Patrick’s Day – with this shamrock cake. It should be noted however that services started on 15 March. Seen promoting the new service are the UK airport’s Tony Hallwood, Aviation Development Director, and Emma Holliday, Leisure Sales Executive. Seen cutting the cake along with Hallwood (who changed his tie for the cutting moment) are passengers Rosemary Somerton, Ian Somerton, Louise Crowley, and Sinead Murphy. 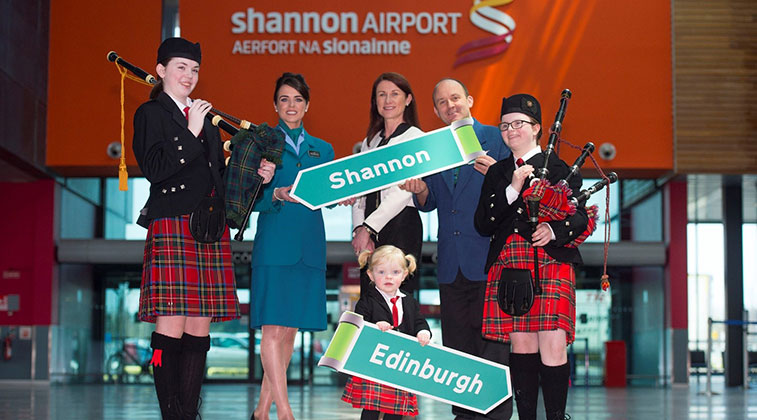 On 16 March Shannon Airport celebrated the re-start of services by Aer Lingus Regional to Edinburgh. Flights to the Scottish capital will be flown by the carrier from Shannon six times weekly and ends a two-year hiatus by the airline on the route. Pictured celebrating the resumption of services to Edinburgh is Mary Considine (centre), Director of the Board, Shannon Airport.