Deliveries during the second month of 2016 between Airbus and Boeing totalled 102 aircraft, 31 units more than was delivered during the first month of this year when comparing the two companies’ performances together. During February, Boeing distributed 56 aircraft, with the European manufacturer supplying a total of 46. The result means that so far in 2016 Boeing has delivered 37 more aircraft than Airbus. Boeing’s February delivery total is seven units less than it delivered in the same month of last year, while Airbus delivered the same amount of aircraft when compared to February 2015. Overall 77% of deliveries in February were narrow-body aircraft, with the remaining 23% being wide-body. Looking at the wide-body market for February, Boeing produced 70% of aircraft (down from 74% in January), while Airbus produced the remaining 30%. 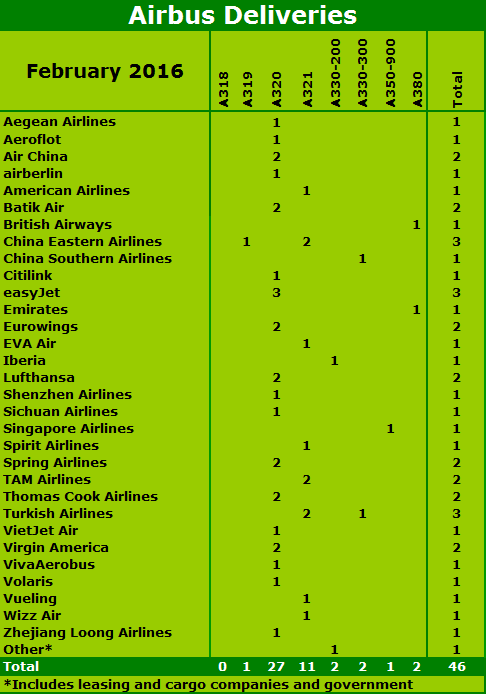 Airbus ended February with a total of 46 units being delivered to airlines, which is 24 more airframes than the company delivered in January, and equal to what was delivered by Airbus during the corresponding month of last year.

For the month of February, single-aisle deliveries were led by the A320 (27 units – 16 more than January), while the A321 followed in second place (11 units), with a grand total of 39 single-aisle aircraft being provided to carriers around the world. This means that Airbus produced only one less narrow-body aircraft than Boeing in February. A total of 18 airlines received A320s last month, which is double the amount of January, with easyJet being the largest recipient of the variant by picking up three. In relation to A321 deliveries, eight airlines picked up the type, with China Eastern Airlines, TAM Airlines and Thomas Cook Airlines each picking up two of the aircraft.

Looking at wide-body deliveries, Airbus handed over seven airframes in February, two more that in January. Following on from the delivery of only one A380 in January, the European producer handed over two in February, with one aircraft going to the world’s leading A380 operator Emirates, while the other was allocated to British Airways. Three A330-300s were also delivered in February, with one going to Turkish Airlines meaning that the carrier’s fleet has now surpassed 300 aircraft. “Turkish Airlines received its 100th aircraft in August 2006, 73 years after its establishment. Nearly seven years later, in March 2013, its fleet reached 200 aircraft. With 300 aircraft in our fleet today, we are the world’s 13th largest airline in terms of fleet size, and with 39 new aircraft to be added by the end of this year, Turkish Airlines will be even more prominent at the international level with its young fleet,” commented Turkish Airlines’ Board Chairman M. Ilker Ayci. One A350 was delivered in February to Singapore Airlines. 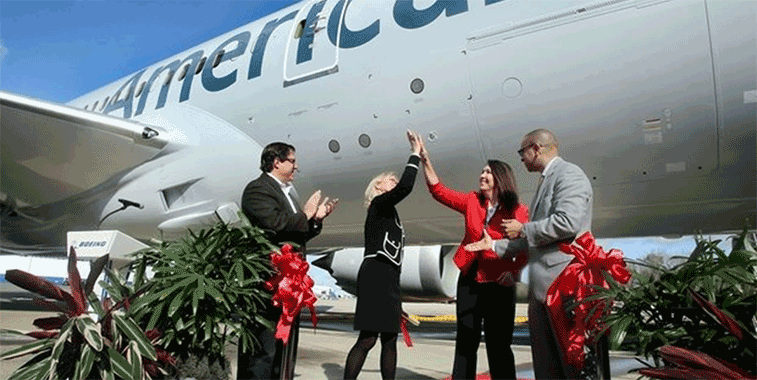 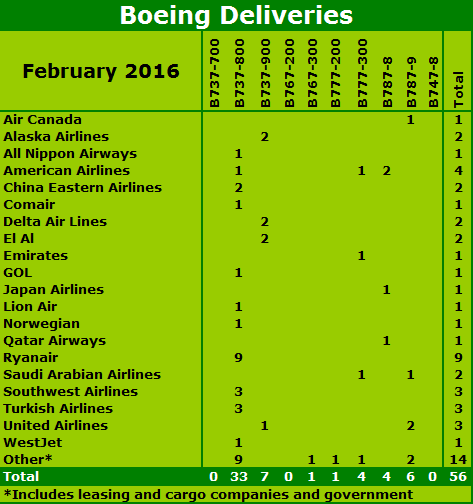 Boeing closed February with a total of 56 unit deliveries, seven more than in January. However the total is seven units less than in the same month of 2015. Airlines received a total of 40 single-aisle units from Boeing in February, five more than January. A total of 33 737-800s were delivered, while seven 737-900s were received by customers. Ryanair was the largest recipient of the 737-800 in February, picking up nine of the variant into its fleet. This means that for 2016 Ryanair has already welcomed 16 737-800s. In total, 15 airlines were delivered single-aisle units from the American manufacturer during February, one less than in January. Nonetheless, it should be noted that nine 737-800 deliveries were to leasing companies.