Aer Lingus recently launched two new routes to the UK, connecting Cork with Leeds Bradford and Southampton. Both routes will be served by Stobart Air’s 72-seat ATR 72-600s operating as Aer Lingus Regional. Both routes were celebrated with impressive cakes at the Irish airport. However, neither route makes it into the top 15 of the airline’s routes from Cork as measured by ASKs.

Cork Airport is Ireland’s second busiest after Dublin, handling just over two million passengers in 2015. Located in the south of the country, the airport is dominated by Aer Lingus and Ryanair. According to OAG Schedules Analyser data, Aer Lingus accounted for almost 70% of all scheduled flights at the airport last year, with Ryanair being responsible for almost 30%. CityJet and Flybe also have a small presence at the airport.

In the last couple of weeks Aer Lingus has launched new routes from Cork to Leeds Bradford and Southampton using 72-seat ATR 72-600s operated by Stobart Air under the Aer Lingus Regional brand. With the addition of another new route to Düsseldorf, starting on 1 May, this brings to 21 the number of destinations served by Aer Lingus from Cork this summer, close to the record of 22 it offered in S11 and S12. With 150 weekly departures this will be the airline’s busiest summer at the airport since 2012. 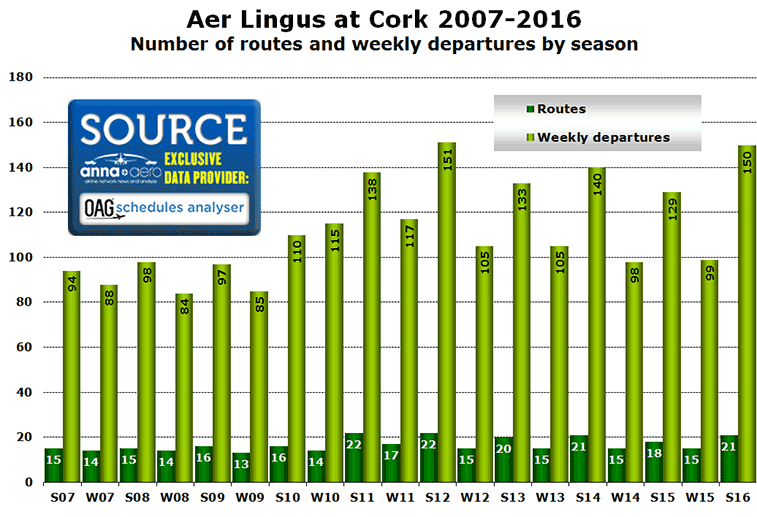 Source: OAG Schedules Analyser for August (summer) and February (winter) for each year.

London Heathrow is #1 for ASKs

The leading route as measured by ASKs (Available Seat Kilometres) which takes into account sector length, frequency and aircraft size is London Heathrow, which is served with 28 weekly flights. Of the top 15 routes, five are in the UK (shown in blue), five are in Spain (shown in yellow) with the remaining five being Amsterdam (Netherlands), Düsseldorf (Germany), Faro (Portugal), Munich (Germany) and Paris CDG (France). Of these 15 routes 11 are flown using 174-seat A320s, while the four UK regional routes are flown with ATRs. 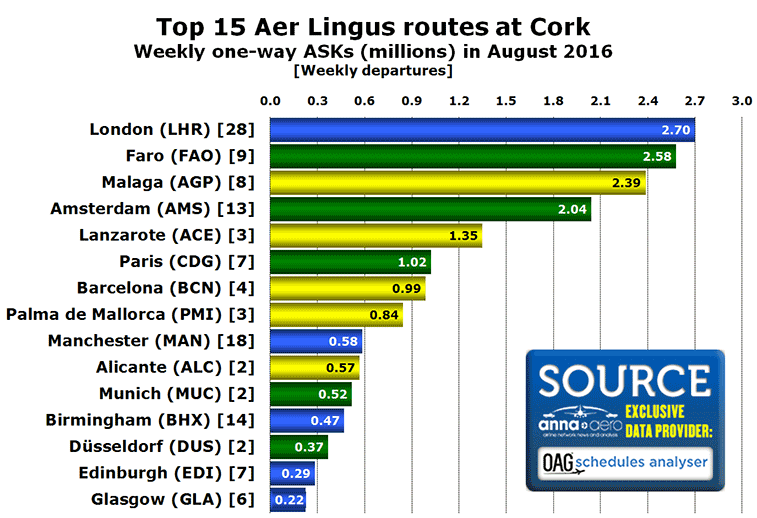 Ryanair competes head-to-head to with Aer Lingus on the Alicante, Faro, Lanzarote, Malaga and Palma de Mallorca routes, while both carriers also serve Gran Canaria and Tenerife South during the winter season. Destinations that Aer Lingus has served from Cork in the last decade but which are no longer operating include Berlin, Lisbon, London Gatwick, Madrid, Nice, Prague, Rome and Warsaw. 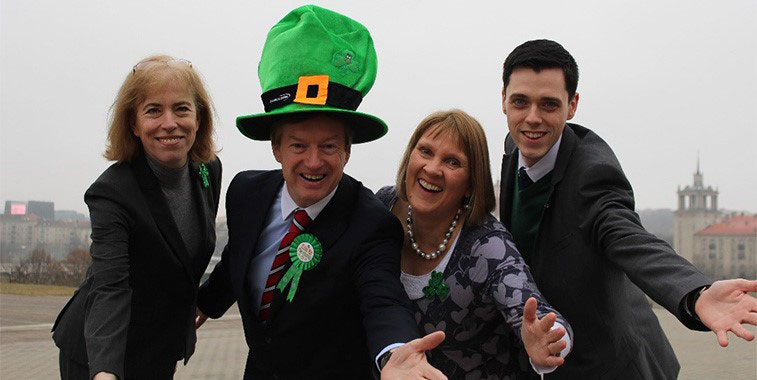