US President Barack Obama and Cuba’s President Raul Castro have a fun gesture in Cuba as the US leader made a historic visit to the nation this week, becoming the first sitting US president to visit the nation in nearly 90 years. Also seen is Air Force One arriving into Havana Airport. American carriers will soon be a regular site at Cuba’s largest airport due to the recent Memorandum of Understanding (MOU) that was signed between Cuba and the US on 16 February. The MOU allows for carriers to serve the country pair with scheduled flights after nearly 50 years of sanctions.

On 16 February, the US and Cuba signed a Memorandum of Understanding (MOU) that will allow for the resumption of scheduled air services between the two nations. Under the terms of the MOU, US carriers may operate up to 20 daily round-trip services to Havana. For scheduled combination or all-cargo services from each of the other nine international airports in Cuba, US carriers may operate up to 10 daily round-trip frequencies, allowing all carriers combined to operate up to 90 daily non-Havana US – Cuba round-trip services. The MOU also allows for unlimited charter services to and from any point in Cuba, in accordance with the regulations of each country.

American Airlines, Alaska Airlines, Delta Air Lines, Frontier Airlines, Southwest Airlines, Spirit Airlines, United Airlines and JetBlue Airways have all submitted applications to the US Department of Transportation to operate scheduled services to Cuba. Apparently Delta is seeking approval to fly to Havana with daily flights from its Atlanta hub, as well as from New York JFK, Miami and Orlando airports. American has submitted an application for 10 daily flights to Cuba from Miami, as well as regular daily flights from Los Angeles, Chicago O’Hare, Charlotte Douglas and Dallas/Fort Worth. JetBlue has signed up for daily flights to Cuba from JFK, New York Newark and Boston in the north-east of the US. It has also requested to serve four Cuban cities from the Floridian airports of Fort Lauderdale, Orlando and Tampa with up to eight daily flights. United Airlines has submitted an application to fly to Cuba from its Newark, O’Hare, Washington Dulles, and Houston Intercontinental hubs. Frontier has applied for three daily flights from Miami and one from Denver. Spirit Airlines has requested for two daily flights from Fort Lauderdale, while Southwest has requested to serve the same three Floridian airports that JetBlue has applied for. Finally, Alaska Airlines has applied for a twice-daily non-stop service between Havana and Los Angeles.

Regional carriers requesting to serve the market as well…

Regional airline Silver Airways has also submitted a request to serve Cuba from the US. If the carrier is granted permission and given the slots it has asked for, it will serve 10 Cuban destinations from the Floridian airports of Key West, Fort Lauderdale, West Palm Beach, Southwest Florida and Jacksonville. 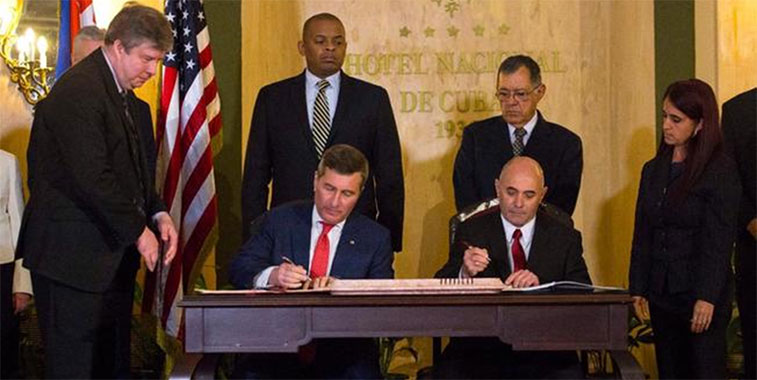 On 16 February, US Transportation Secretary Anthony Foxx (centre back left) and Cuba’s Minister of Transportation Adel Rodriguez (centre back right), watch US Assistant Secretary of State for Economic and Business Affairs, Charles Rivkin (left sitting), and Cuba’s Civil Aviation Institute Director, Alfredo Cordero (right sitting), sign the airlines agreement in Havana. The US and Cuba have signed an agreement to resume commercial air traffic between the two nations for the first time in five decades.

In order to get an understanding of the current demand between the US and Cuba, albeit for indicative purposes given the lack of direct flights, anna.aero decided to look into the current traffic trends between the two nations. As can be seen from the graph below, the lack of demand (apart from between Havana and Miami) from Cuba to the US is very evident, a result of travel restrictions for US and Cuban travellers between the two nations. However, from the routes that have been applied for by airlines (explained above), these potential city pairs may well soon be served. Currently there are several charters a day between Cuba and Florida in the US. American said recently that 86% of its charter flights to Cuba originated from Miami in 2015, so its proposal for scheduled flights mirrors that demand (shown below). The average charter flight frequency for American per day last year from Miami was 7.3, reflecting a 14% increase from 2014 according to the carrier. 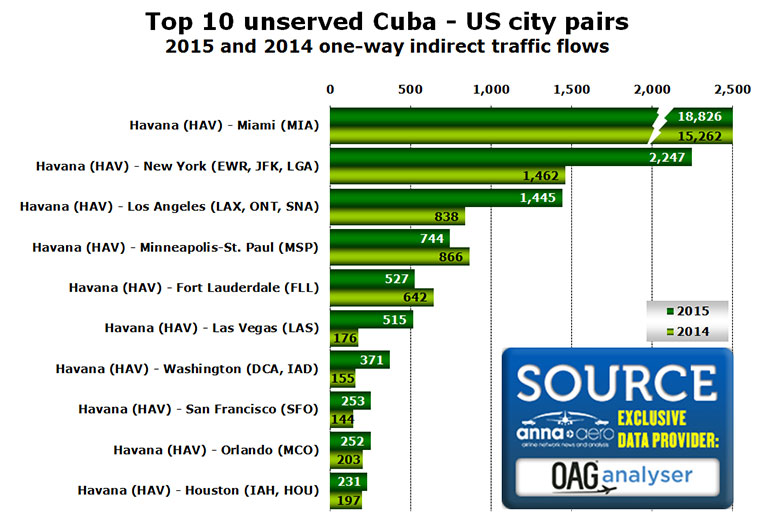 Based on US census data for 2010, there are close to 1.8 million Cuban’s in the US, with 67% of this population living in the state of Florida, making it the most popular state that airlines are choosing to commence flights to Cuba from. It should be noted that the state with the second largest Cuban population is California with around 80,000 people, yet only two airlines have proposed to fly between it and Cuba. Based on the route requests that airlines have applied for between the US and Cuba, next year could see the US become the number one country market from the Caribbean island. However with the US President’s visit to Cuba this week, anna.aero has decided to look into what is happening at the moment in the island’s aviation market.

Home to around 11.2 million people, Cuba is the largest of the Caribbean’s 122 populated islands. As of March 2016, Cuba is connected to 32 country markets directly, the same amount of countries that the Caribbean island was linked to in 2015. Air China became the latest carrier to serve the island when it commenced flights from Beijing via Montreal in December, meaning that Cuba is now connected to Asia. In 2016 it is hoped through new relations with the US that the island will gain multiple connections to the North American nation. Based on OAG Schedules Analyser data, Cuba is served by nine commercial airports with more than 1,000 monthly seats, namely Havana, Varadero, Santa Clara, Holguin, Cayo Coco, Santiago de Cuba, Cayo Largo del Sur, Camaguey and Manzanillo.

Seat capacity rises 171% during past decade 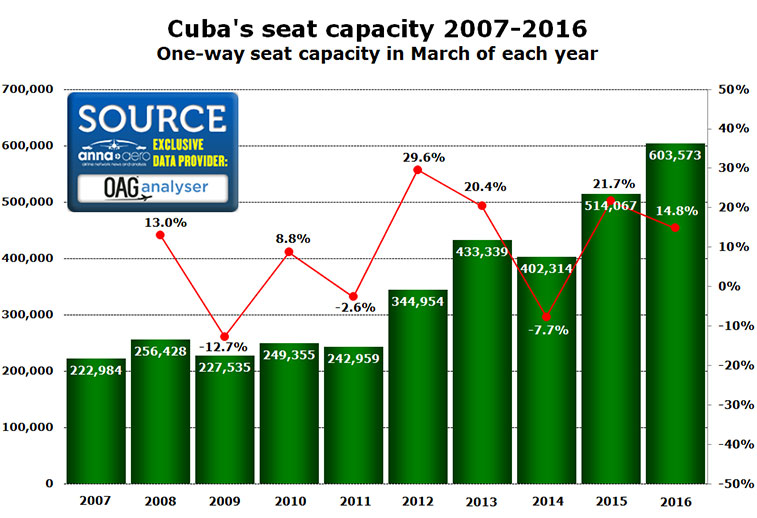 Source: OAG Schedules Analyser data for March of each year.

Havana is the largest airport in Cuba, and currently occupies 43% of available seat capacity from the island. The capital city airport is then followed by Varadero (20% of capacity), Santa Clara (11%) and Holguin (10%), with the remaining airports providing the residual seat capacity.

After witnessing an increase in seat capacity of 1.7% over the past 12 months, Canada remains the number one country market from Cuba. One factor helping this growth is due to Air China’s new service from Beijing to Havana which operates via Montreal. The market which has seen the biggest increase in capacity within the top 12 is Mexico, growing by 43% since last March. Following Mexico, the UK is the only other country in the top 12 to register a growth in capacity over 40%. Only two airports in the UK (as of March 2016) have direct flights to Cuba, with Manchester holding up three connections to Varadero, Holguin and Cayo Coco, while London Gatwick has direct links to Havana and Holguin based on OAG Schedules Analyser data. Last March, flights between Manchester and Cayo Coco did not operate and neither did Gatwick to Holguin. Virgin Atlantic Airways and Thomas Cook Airlines are currently the only carriers in the market. From May, Thomson Airways will become the third carrier in the market serving the Gatwick and Varadero city pair. 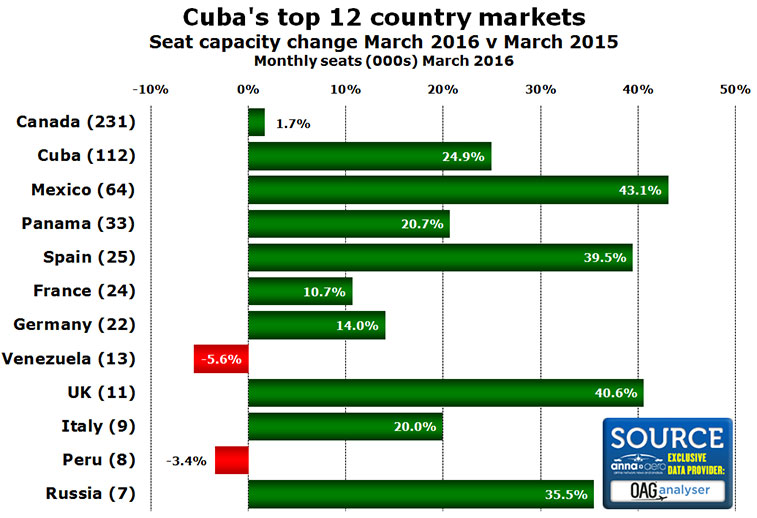 Outside of the top 12, one market which has seen its capacity double over the past 12 months is the Dominican Republic, which is the #15 largest market this year (up from #21 in 2015). Colombia (17% growth), Netherlands (12%), Switzerland (52%), Ecuador (24%) and Argentina (27%) all registered double-digit growth when compared to the same time period analysed last year.

After posting an increase in seat capacity over the past 12 months of nearly 11%, Sunwing Airlines has overtaken national carrier Cubana (seat capacity up 9.2%) to become Cuba’s number one carrier. It should be noted that Sunwing’s seat capacity advantage over Cubana is only 0.1%. OAG Schedules Analyser data shows that the Canadian carrier operates 58 routes between Canada and Cuba (up one when compared to March 2015), with its number one being between Toronto Pearson and Varadero. The route occupies 12% of the carrier’s overall seat capacity between the two countries. 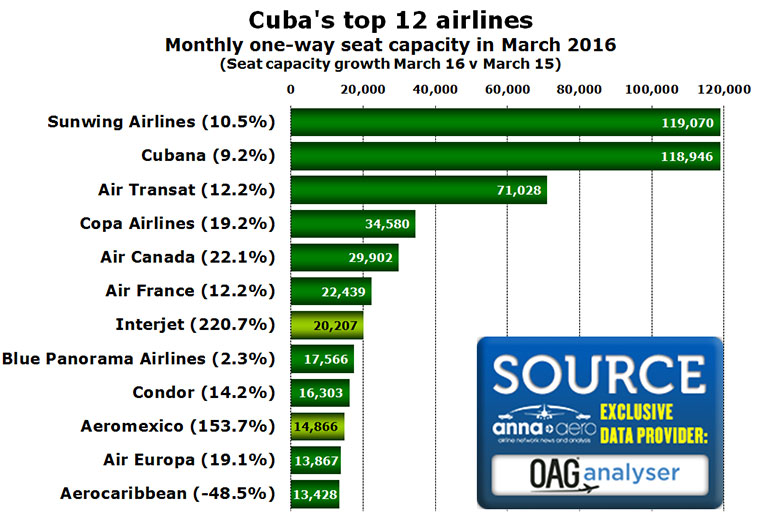 Mexican carriers (highlighted in light green) have shown to be the best airlines for growth from Cuba during the past 12 months. The carrier that is showing the strongest growth out of Cuba’s top 12 airlines is Interjet, with it recording a seat capacity increase to the Caribbean island of 221%. The carrier will further expand next month when it adds a connection between Mérida and Havana. Aeromexico is another carrier reporting triple-digit growth, with the SkyTeam member showing an impressive 154% rise in seat capacity. The airline only operates two routes between Mexico and Cuba, connecting Mexico City and Cancún to Havana. Aeromexico’s seat capacity between the countries two capitals has grown by 118% during the past 12 months, with it now offering double-daily services compared to daily last year. The carrier has also increased its frequency from Cancún to Havana from twice-weekly to daily, representing an increase in seat capacity of 265% on the 508-kilometre sector. One airline which has fallen out of the top 12 when compared to last year is WestJet, despite it reporting a rise in capacity to Cuba of 5.5%. Its fall from the top 12 is due to the strong growth being reported by Mexican carriers. Nonetheless, with potential scheduled services to the US planned to commence soon, Cuba’s top 12 airlines could look very different in 12 months time. 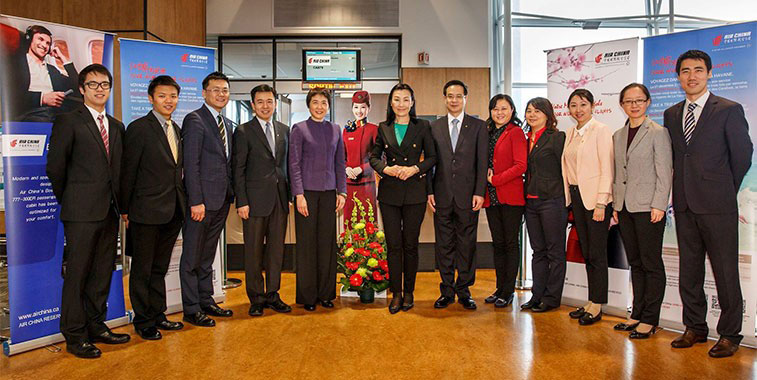 Air China celebrated the launch of flights to Havana in Cuba on 27 December at Montreal Airport in Canada. The thrice-weekly Beijing to Havana service, flown using 777-300ERs, operates via the Star Alliance’s existing service to Montreal. The result means that Cuba is now connected to 33 country markets either direct or one-stop.