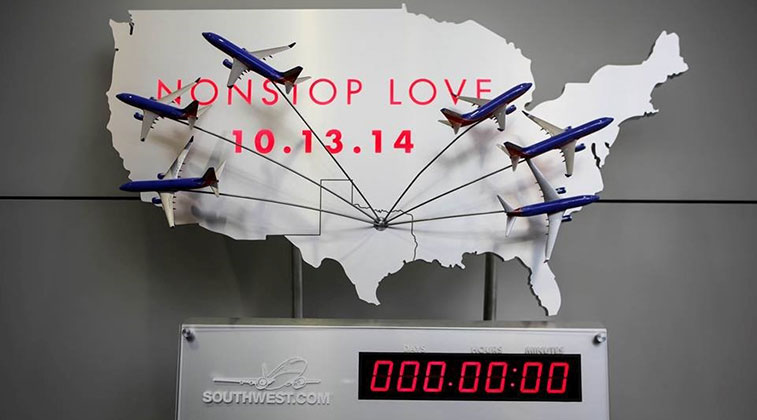 The repeal of the Wright Amendment in 2014 has enabled Southwest Airlines to grow significantly at its home airport of Dallas Love Field in Texas. Last year saw the LCC increase flights by 32% at the airport making it the airline’s sixth busiest on its network after Chicago Midway, Las Vegas, Baltimore/Washington, Denver and Phoenix.

Despite being one of the four major players in the US domestic market, Dallas-headquartered Southwest Airlines still only served 85 airports in the US in 2015. This compares with 285 for United Airlines, 230 for Delta Air Lines and 220 for American Airlines, although some of these airports it should be acknowledged only have a handful of annual flights with these major carriers.

Southwest’s network last year comprised 97 airports in total, having acquired a number of international destinations following the merger with AirTran Airways. Analysis of OAG Schedules Analyser data shows that the LCC served a total of 63 airports in 2006. However, of the top 10 airports in 2006 (by annual aircraft movements) eight are still in the top 10 almost a decade later. Oakland (fifth in 2006) and San Diego (tenth in 2006) have been replaced by Denver and Atlanta. Atlanta was of course the main hub for AirTran. 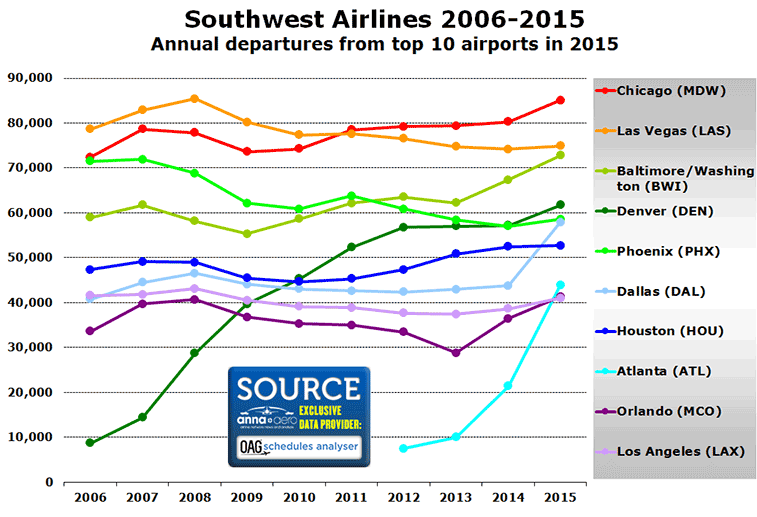 In 2011 Chicago Midway overtook Las Vegas as the airline’s busiest hub in terms of annual movements with Baltimore/Washington passing Phoenix for third place in 2012. Denver has risen rapidly and overtook Phoenix for fourth place in 2014. The repeal of the Wright Amendment, which has finally allowed more destinations to be served from Dallas Love Field, means that the airline’s home airport passed Houston Hobby for sixth place in 2015.

Comparing schedule data for the first week of June in 2016 with the first week of June in 2015 reveals that Southwest has added two new airports to its network during that period, Belize and Liberia in Costa Rica. Daily flights from Houston Hobby to Belize were started on 15 October 2015, while Liberia services were launched from Houston Hobby on 1 November and from Baltimore/Washington on 7 November, with Los Angeles flights starting shortly after, on 12 April.

The biggest year-on-year increase in weekly departures is in Denver, just beating Dallas Love Field. Both airports will see almost 100 additional weekly departures with Southwest this June when compared with last June. Four of the LCC’s fastest-growing airports are in California (shown in bright green), with both Orange County and Oakland seeing a net gain of 50 or more weekly departures. 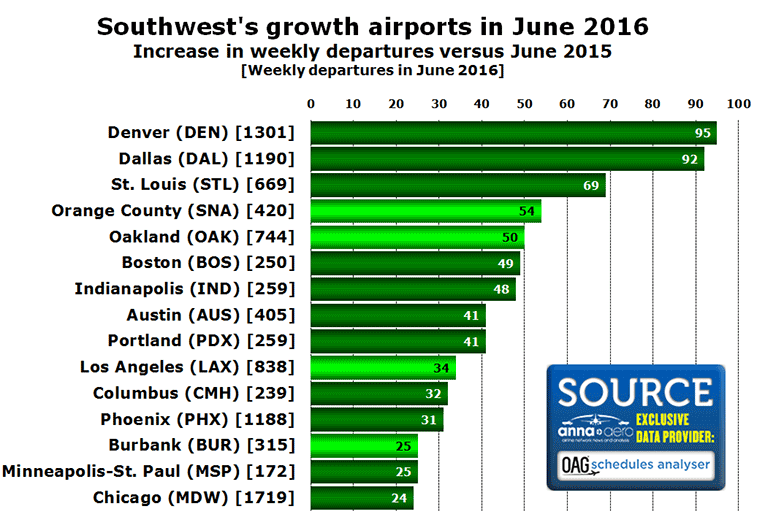 In terms of percentage growth among the top 15 airports, the fastest-growing are Boston (+24%), Indianapolis (+23%), Portland (+19%) and Minneapolis-St. Paul (+17%). At the other end of the scale the airports with the biggest decreases in weekly departures are Akron-Canton (down 48 weekly flights from 68 to 20), Tampa (down 39), Orlando (down 35) and Southwest Florida (down 30). Akron-Canton Airport in Ohio has seen Southwest cut nearly all of its routes in the last year with the exception of a multiple-daily service to Atlanta and seasonal flights to Orlando.

anna.aero’s New Route Database currently includes 23 new routes being started by Southwest spread across three separate start dates; 11 starting on 12 April, five starting on 5 June, and seven starting on 7 August. These 23 routes involve a total of 32 different airports. St. Louis with five new routes is the biggest gainer of new services followed by Chicago Midway and Portland with three each. St. Louis is one of Southwest’s fastest-growing airports this summer with 10 more departures per day than last summer. Last week saw the launch of flights to Pittsburgh, while new routes to Cleveland, Des Moines, Oakland, Portland and Wichita will be added before the end of June.