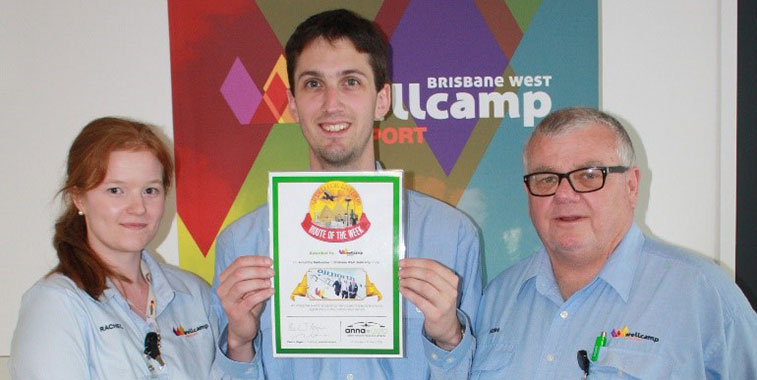 Brisbane West Wellcamp Airport this week celebrated winning the prestigious anna.aero Route of the Week Award, which was given to the airport in recognition of Airnorth’s launch of services to Melbourne on 14 March. Seen celebrating with the award are airport staff members: Rachel Williams, Security Officer; Andrew McNamara, Customer Service Officer; and Kenn Robb, Security Officer. Airnorth also launched services from the airport to Cairns on 15 March. 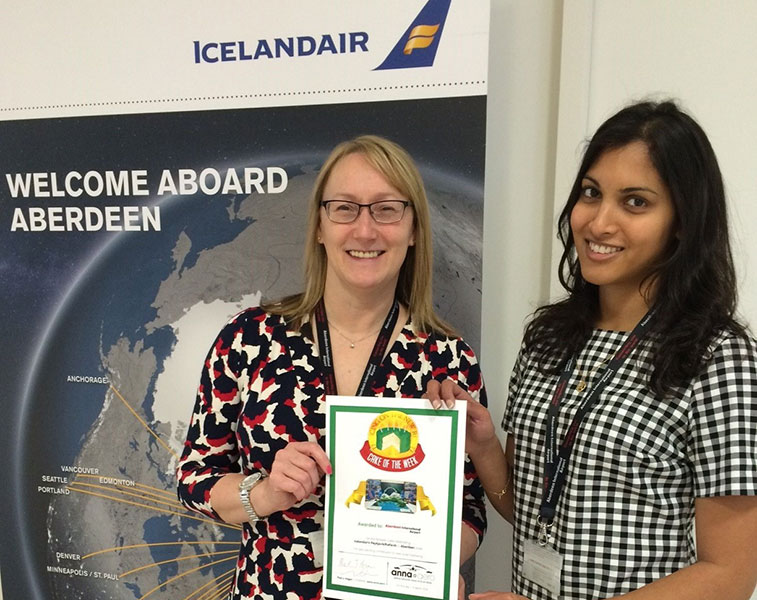 This week Aberdeen Airport celebrated its anna.aero Cake of the Week win, given to the airport in recognition of the fantastic volcanic culinary masterpiece it presented at the launch of Icelandair’s flights from Reykjavik/Keflavik on 9 March. Seen celebrating with the award, and also highlighting the vast US connections available to passengers from Aberdeen made available by the new route are the airport’s Lynn Harwood, Route Development Manager, and Anisha Patel, Marketing Co-ordinator. Icelandair will operate between Aberdeen and Reykjavik/Keflavik four times weekly. 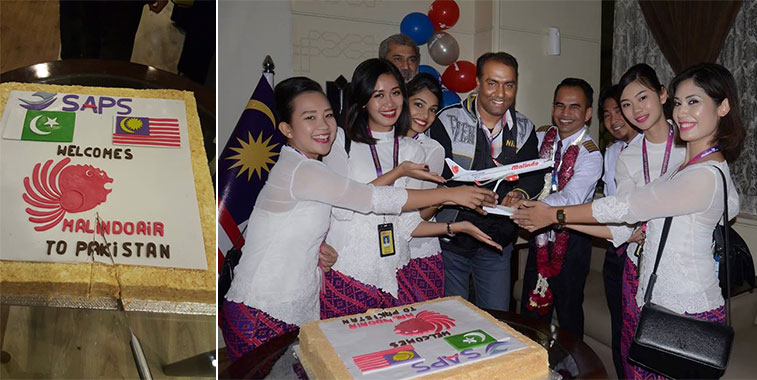 On 3 March, Malindo Air celebrated its first service to Pakistan by launching a direct route from Kuala Lumpur to Lahore. The 4,289-kilometre route now becomes the airline’s longest sector, just beating the 4,276-kilometre city of Kuala Lumpur to Amritsar in India. The latest route, which will be served four times weekly, will face direct competition from Pakistan International Airlines who already serve the airport pair twice-weekly with a mix of A310s and 777s. 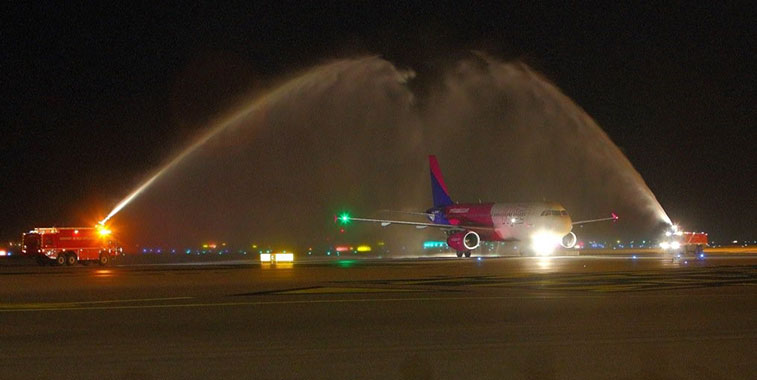 On 11 March Nice Airport welcomed its latest carrier Wizz Air with a traditional water arch salute. The airline launched twice-weekly (Mondays and Fridays) services from Budapest using its A320 fleet. The 1,825-kilometre city pair will face no direct competition. On 18 March Freebird Airlines commenced charter services between Gazipaşa and Tehran. The city pair will operate throughout the Nowruz Holiday. While the aircraft was welcomed at the Turkish airport with a traditional water arch salute, passengers were greeted by TAV Gazipaşa and Freebird executives, both of which celebrated the event with an elaborate cocktail reception. TAV Gazipaşa Operations Deputy Coordinator, Murat Şen, stated about the series of flights: “TAV endeavours to increase direct flights to Gazipaşa Airport, and continues through promotion and marketing activities its contribution to develop the tourism potential in the region. We are glad to host flights from Tehran at Gazipaşa as part of our collaboration with Freebird, which is the 19th airline company to launch flights to the airport.” 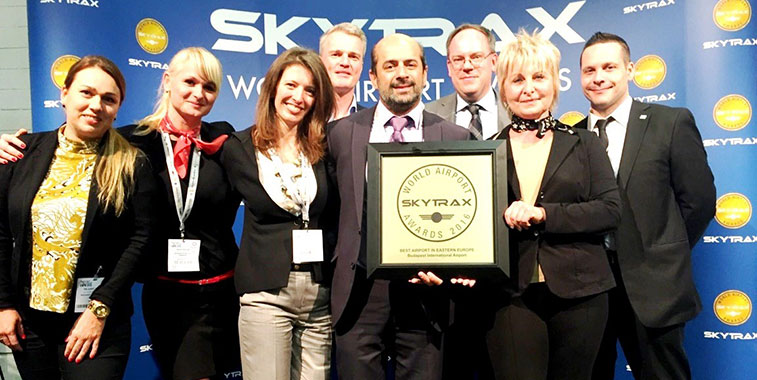 On 16 March Budapest Airport was declared “Best Airport in the Eastern Europe region” for the third consecutive year at the Skytrax World Airport Awards 2016. Accepting the accolade on behalf of the airport, Kam Jandu, CCO, Budapest Airport, commented: “Receiving the Skytrax title of ‘Best Airport in the region’ is an outstanding achievement in itself, to retain this prestigious award for the third year in a row is a particular triumph and acknowledgement of our continued commitment to deliver best-practice throughout our airport. It is a great honour and an exceptionally proud moment to see our commitment once again recognised by passengers themselves.” 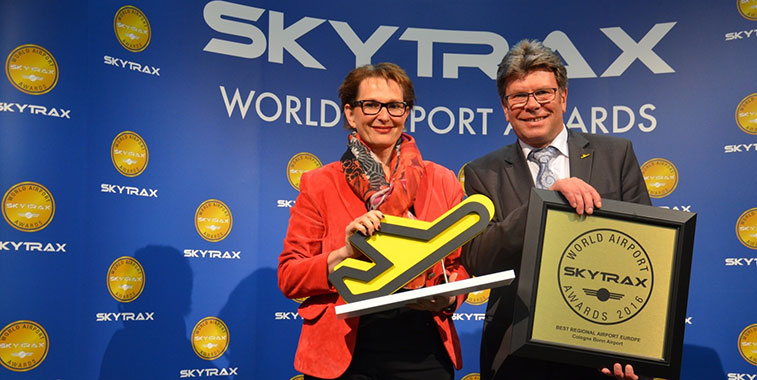 Another winner at the evening’s events was Cologne Bonn Airport, which has been confirmed as “Europe’s Best Regional Airport” for the third time in succession. Hitting a hat-trick before a home crowd at the renowned Skytrax World Airport Awards in Cologne on 16 March. Accepting the accolade on behalf of Cologne Bonn Airport, Ulrich Stiller, Director Marketing and Sales, and Alexandra Wissen, Head of Central Infrastructure, are presented with the Skytrax ‘Best Regional Airport Europe’ Award. 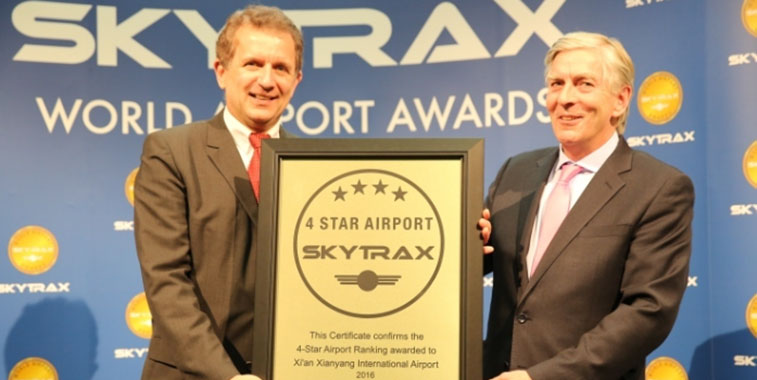 Passengers voting in the Skytrax World Airports Awards selected Xi’an Airport, located in the Chinese megacity of Xi’an, as the “Best Regional Airport in China 2016”. The airport exceeded 30 million passengers for the first time in 2015 when it served some 33 million passengers and ranked eighth in China. This represented a 13% increase from the 29.2 million passengers served in 2014. Fraport holds a 24.5% stake in the joint-venture Xi’an Xianyang International Airport Corporation, which is responsible for operational optimisation of the airport’s infrastructure. Accepting the award is Wolfgang Weil (left), COO and member of the board of Xi’an Airport. 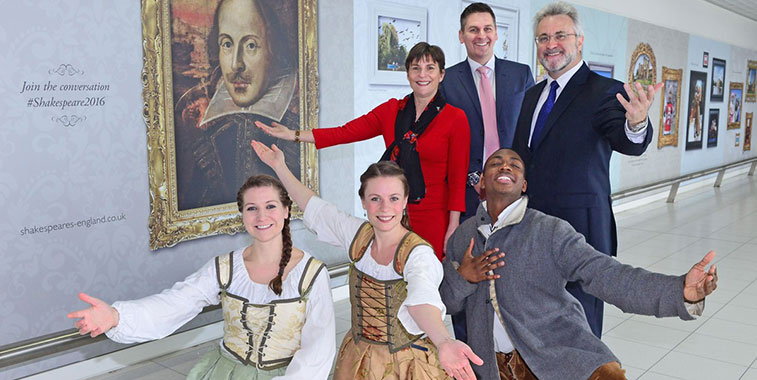 Birmingham Airport has recently unveiled a new installation to greet the millions of visitors arriving into the region through “Shakespeare’s” Airport each year. In partnership with destination management organisation, Shakespeare’s England, the new artwork is located on the arrivals level of the terminal building as passengers make their way from the aircraft to immigration. It gives visitors a taste of what the region can offer, showcasing the range of wonderful tourist attractions including the Royal Shakespeare Company, Kenilworth Castle, Warwick Castle, Leamington Spa, Bicester Village and Shakespeare’s Family Houses – which have all supported the campaign. Pictured unveiling the artwork are: Helen Peters, CEO of Shakespeare’s England; Geoff Spooner, Chairman of Shakespeare’s England; and Paul Kehoe, CEO of Birmingham Airport. In character at the unveiling are Emmeline Foster, Mollie Taylor and David Jackson, all actors from the Shakespeare Birthplace Trust. 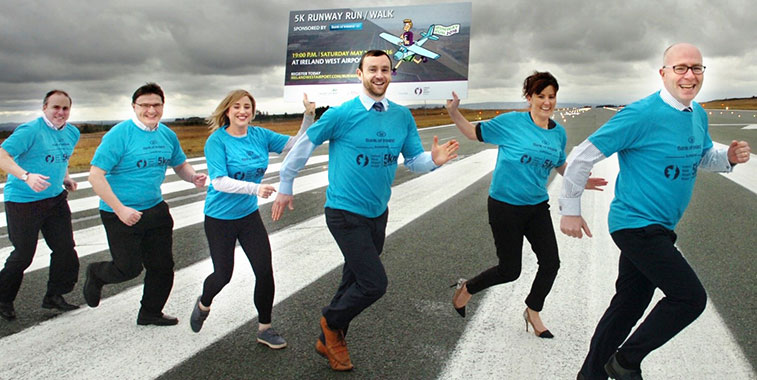 Ireland West Knock Airport is delighted to announce, in partnership with Bank of Ireland, its first ever runway run/walk, which will take place on the evening of 28 May. The run forms part of a programme of events to mark the 30-year anniversary of the official opening of the airport on the 30 May. Last month the airport was delighted to announce its new ‘charities of the year initiative’ with the airport staff selecting three charities to benefit from the airport’s fundraising activities this year. The charities selected are Cancer Care West, MS Ireland and Pieta House, and all proceeds from the runway run/walk and other planned events over the course of 2016 will go to the three charities.