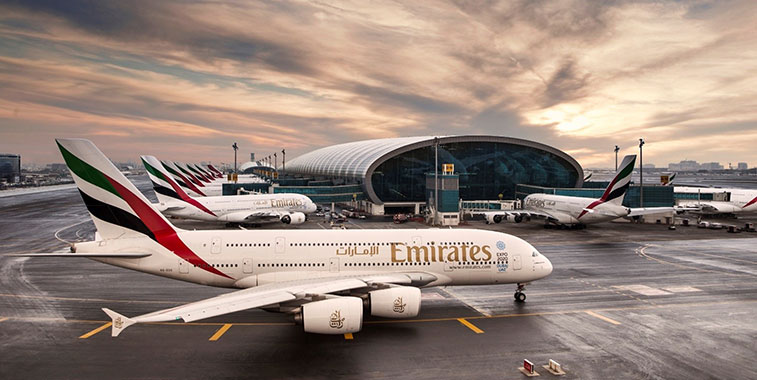 Dubai is now the world’s busiest international airport and still handles almost 50% more passengers than local rivals Abu Dhabi and Doha combined. Connecting traffic is a key part of the airport’s strategy thanks to the extensive route network of home carriers Emirates and flydubai.

Abu Dhabi, Doha and Dubai, the home airports of the MEB3 (Middle East Big 3) carriers (Emirates, Etihad Airways and Qatar Airways) handled just over 131 million passengers in 2015, an increase of almost 15 million compared with 2014, when Dubai capacity was compromised by runway maintenance works. This massive increase in passenger numbers across these three airports in a single year, is the highest ever recorded, beating the growth of 12.6 million recorded in 2013. Dubai is still the dominant airport, handling almost 50% more passengers in 2015 than Doha and Abu Dhabi combined. 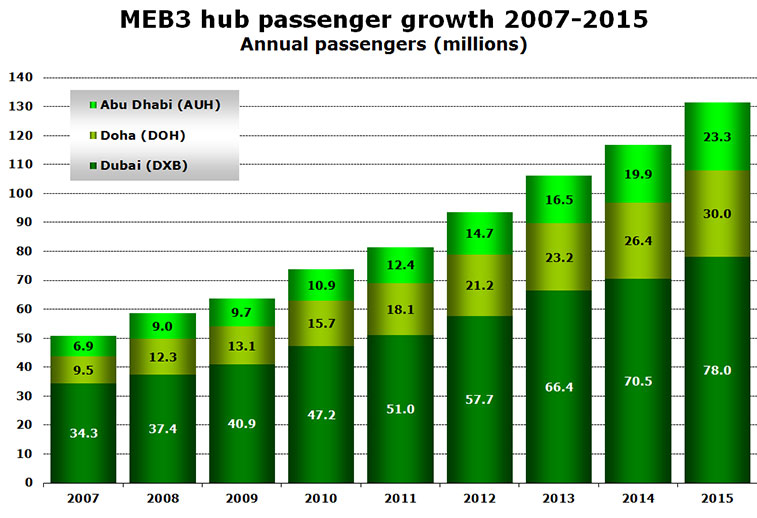 All three airports rely heavily on connecting traffic to generate passenger growth, aided by their advantageous position between Europe and Asia, Europe and Africa, as well as Africa and Asia. Of the three cities, Dubai has developed fastest as a destination in its own right, followed by Abu Dhabi and Doha. In sporting terms, Dubai is probably best known for golf, Abu Dhabi for hosting F1 motor races and Qatar for being the host country of the 2022 Football World Cup.

This week’s anna.aero analysis examines traffic flow data using OAG Traffic Analyser to determine which of the many routes served from each of the three airports, contributes most to transfer traffic flows. In other words, ignoring those passengers who either start or finish their journeys in Abu Dhabi, Doha or Dubai, where do the passengers using the airport as a connecting hub actually start and end their journeys.

With not only Emirates but also flydubai having extensive route networks in Dubai, no single destination dominates these rankings. Kuwait, just beats Doha and London Heathrow for the most connecting passengers in 2015, with each of the three responsible for just over 1.1% of all passenger movements in Dubai. Middle East destinations (highlighted in bright green) take three of the top five positions and five of the top 15. 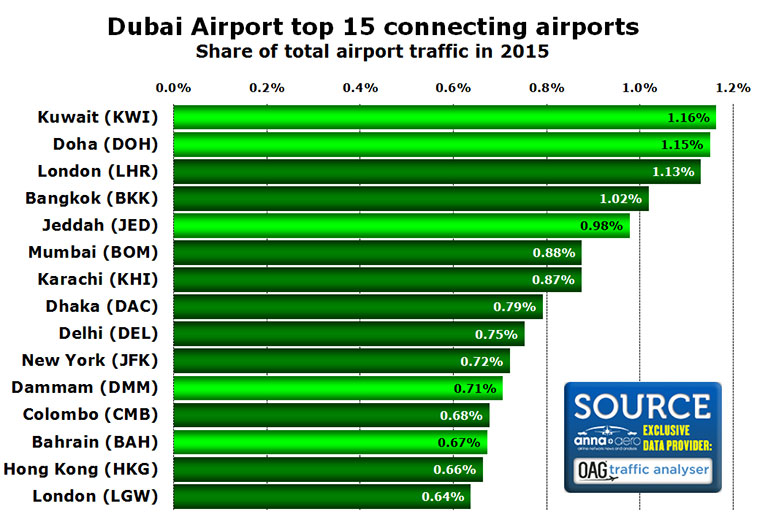 London’s two biggest airports both make the top 15, the only European airports to do so, further highlighting the lack of non-stop connectivity from London to many of the world’s emerging markets, a point that is frequently highlighted in the on-going debate about the need for additional runway capacity in London. New York JFK also makes the rankings, helped by the fact that Emirates serves the US city with three daily flights. India (with Delhi and Mumbai) joins Saudi Arabia (Dammam and Jeddah) and the UK in having two airports ranked in the top 15.

The top four in Doha are almost the same as the top four in Dubai, with Bangkok Suvarnabhumi, Kuwait and Heathrow again ranking high, but with Dubai replaced by Doha. Qatar Airways operates some 15 flights per day between Doha and Dubai, so maybe not surprisingly Dubai ranks top with its connecting passengers accounting for almost 3% of all Doha traffic. This time six Middle East airports make the top 15. Apart from Heathrow, two other European airports make the top 15; Paris CDG in fifth and Milan Malpensa in 13th. Asian destinations in Doha’s top 15 airports that were not present in Dubai’s top 15 are Jakarta, Kuala Lumpur and Singapore. 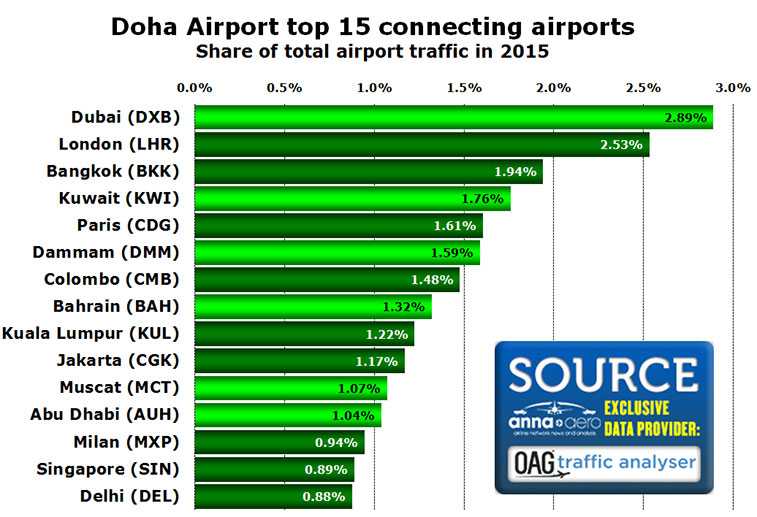 After ranking third from Dubai and second from Doha, Heathrow finally tops the rankings at Abu Dhabi, with Bangkok once again making the top four, this time in second place to Heathrow. Middle East airports again take five of the top 15 places, with Riyadh making the top 15 for the first time. Among European airports, Heathrow is joined again by CDG, but also this time by Manchester. Whether or not this has anything to do with Etihad Airways’ sponsorship of Manchester City football team is unknown, but clearly the airline has a high brand visibility in the city. A couple of Asian destinations (Manila and Sydney) not previously ranked in the top 15 at either Dubai or Doha make the top 15 in Abu Dhabi, while JFK makes its second appearance after appearing in the Dubai rankings. 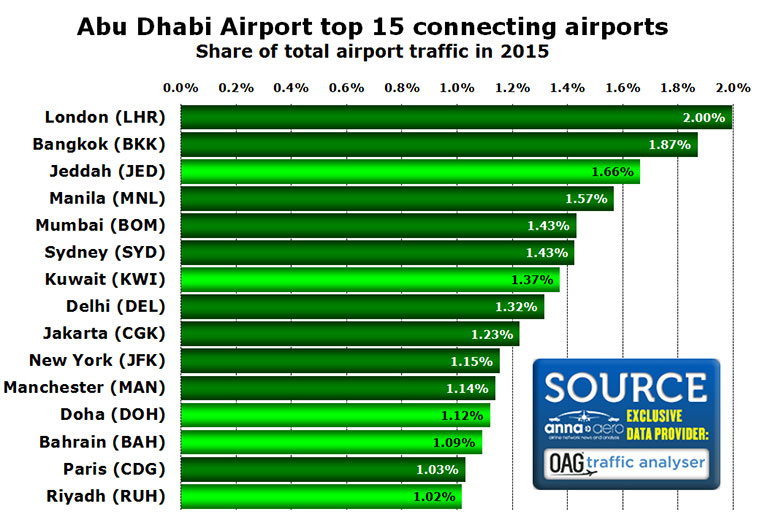 The fact that Heathrow appears in the top three of all three MEB3 hubs airports for connecting traffic (and London Gatwick makes it into the top 15 for Dubai as well) vividly illustrates the lack of direct services from London to many important long-haul destinations, as a result of the severe capacity issues at the world’s busiest two runway airport (Heathrow) and one runway airport (Gatwick). However, since neither airport is likely to benefit from an extra runway for at least a decade (if ever), London will continue to be a great generator of connecting traffic for the MEB3 hubs for the foreseeable future. No wonder that Emirates will be launching a sixth daily flight between Dubai and Heathrow from the start of S16 (this coming Sunday). From 1 June, all six Emirates frequencies will be served by the airline’s A380s, with Qantas offering two further daily flights (in conjunction with Emirates), British Airways thrice-daily flights and Virgin Atlantic Airways a single daily flight. 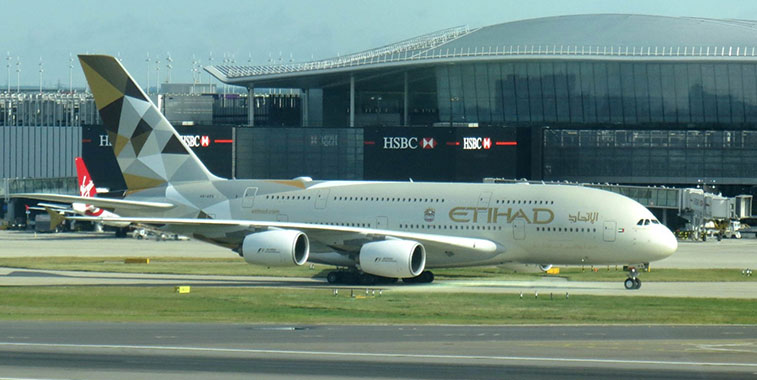 In 2015 the London Heathrow sector generated more connecting passengers through Abu Dhabi for Etihad Airways than any other route on its network. According to OAG Schedules Analyser the UAE carrier used its new A380s on almost 1,200 of the almost 2,200 flights it operated last year on the 5,514-kilometre route between the two airports.