Barcelona-Seoul is biggest-yet Skyscanner “Unserved Route of the Week” with 325,000 searches in 2015 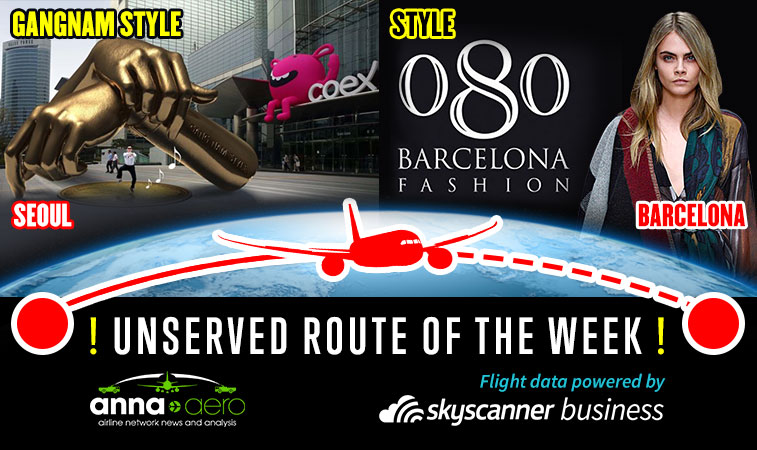 Users of the Skyscanner flight comparison site are showing sky-high demand for a Barcelona-Seoul service with 325,000 searches in 2015. anna.aero favours Korean Air to start the route over Iberia as demand from the Seoul end rocketed at the end of last year to reach almost 40,000 Skyscanner searches in December alone. A statue featuring Psy’s “horse-riding” dance move is being erected outside the COEX shopping centre in Seoul’s Gangnam district where the video was made – 2.4 billion downloads make it the most watched YouTube video of all time.

With 325,000 searches last year, a potential new route from Barcelona to Seoul has been identified as the biggest-ever Skyscanner for Business-anna.aero “Unserved Route of Week” – a powerful new kind of analysis based on aspirational data captured from the Skyscanner.net flight comparison site used by +50 million unique visitors per month. 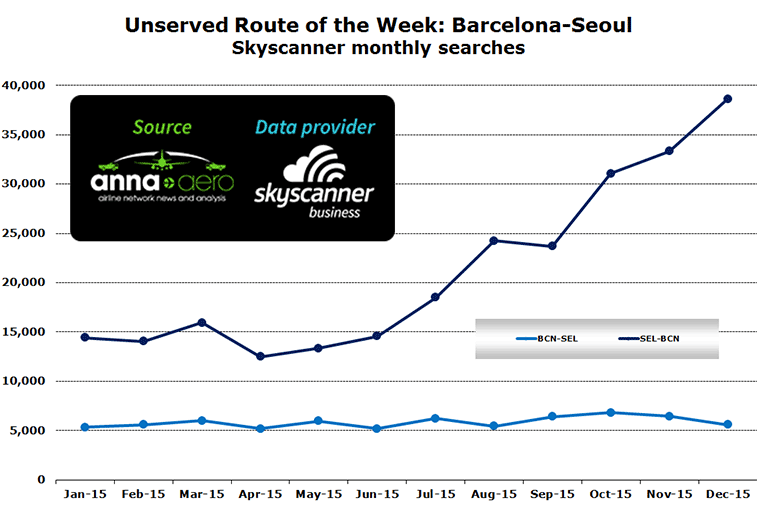 With rocketing outbound demand mainly coming from the Seoul end of the route – almost 40,000 searches in December alone – this route looks like an obvious candidate for Korean Air, although the SkyTeam carrier hasn’t launched a long-haul service since May 2014 when it began daily 777-200 services to Houston. Indeed, Barcelona currently only has limited connections to Asia: Singapore Airlines offers a thrice-weekly service, with MEB3 carriers Emirates and Qatar Airways both offering double-daily links via their respective hubs.

Clearly, this lack of Asian services at Barcelona represents a great prospect for Korean Air to feed its own Asian hub at Seoul Incheon, which currently boasts a network of 91 non-stop destinations (according to OAG schedule data), although the 325,000 Skyscanner searches suggest the route could easily be sustained simply as a point-to-point service.

Alternatively, the Barcelona-Seoul route should also appeal to a re-invigorated Iberia. The oneworld carrier does not currently operate any long-haul services to Asia from either Madrid or Barcelona, although it is starting to! (Iberia launches thrice-weekly services to Tokyo Narita on 18 October, a route it last served in December 1998.) 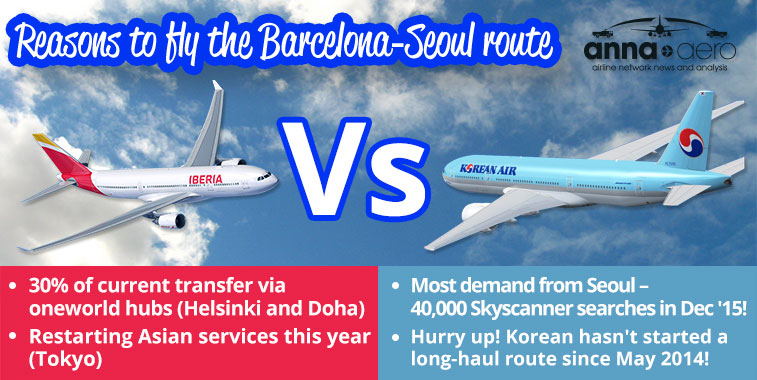 When looking at the last year of searches, the busiest month for potential traffic flows (for both directions on the route combined)  is December 2015 with over 44,000 (mainly from the Seoul end), nearly 27,000 more than the lowest monthly figure, which was recorded in April 2015 (18,000). The seasonality profile of this search data is slightly less extreme than last week’s Unserved Route of the Week (Tokyo to Siem Reap), with the low-month traffic representing 40% of the highest month. According to OAG Traffic Analyser, because there is no direct service, the top three connecting options chosen by those passengers who did book travel between Barcelona and Seoul in 2015 were Dubai (18%), Helsinki (14%) and Doha (13%).

Travellers between these two cities have clearly got used to one-stop alternatives – in fact OAG Traffic Analyser shows over 30 different intermediate airports were used last year. However, the market is extremely buoyant – as the graph below shows, a whacking 14% of the Skyscanner searches for these indirect Barcelona to Seoul services converted into ticket sales – that’s even more than the 12% achieved for all other Skyscanner conversion/purchase rates for all direct routes available from either Barcelona or Seoul. 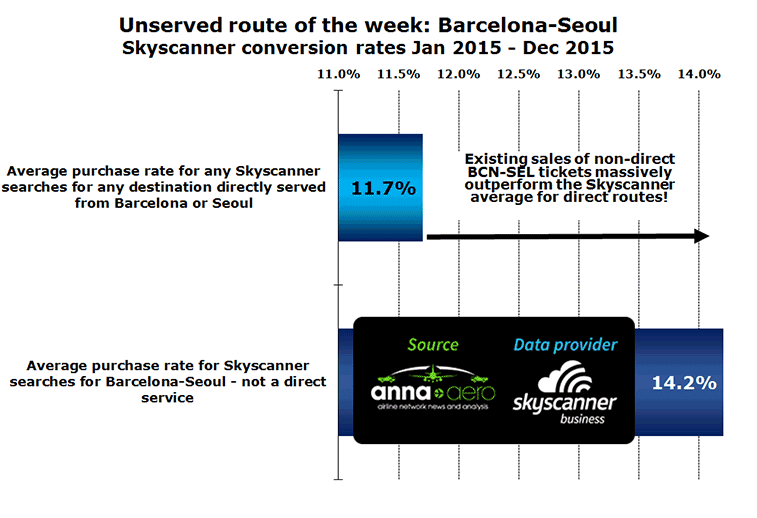