On 27 March Knock Airport celebrated the arrival of Flybe’s inaugural flights from Birmingham and Edinburgh. As it was Easter Sunday, not only did the airport celebrate with a traditional route launch cake, but also with chocolate Easter eggs. Flights to both UK destinations will be operated six times weekly by the carrier’s Q400 fleet. 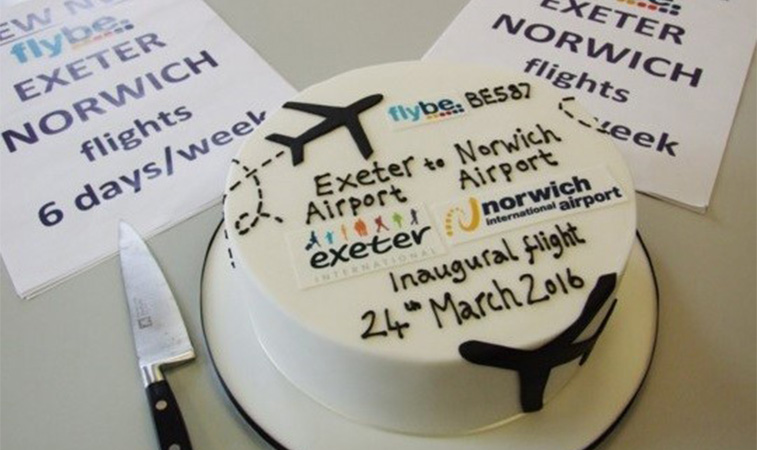 Exeter Airport celebrated the start of Flybe’s inaugural service from Norwich on 24 March with a traditional route launch cake. Flights on the 386-kilometre UK domestic connection will be flown six times weekly by the carrier’s Q400 fleet. Seen discussing business at the launch of Flybe’s latest base at Doncaster Sheffield are: Sir Gary Verity, CEO of Welcome to Yorkshire; Steve Gill, MD Peel Airports; and Vincent Hodder, Chief Revenue Officer, Flybe. The regional carrier will operate from Doncaster Sheffield to Alicante, Amsterdam, Berlin Tegel, Faro, Jersey, Malaga, Newquay and Paris CDG. From October the carrier will add a ninth route to Düsseldorf while a tenth route to Chambery will be launched in December.