Just a selection of the cakes from Ryanair’s industry-leading 41 summer season route launches (twice as many as any other airline): Budapest to Gran Canaria, Belfast International to London Gatwick; Porto to Copenhagen, Vilnius to Birmingham and London Luton, and Palanga to London Stansted. Vote for your favourite cake from one of 40 route launch cakes submitted for our Cake of the Week online poll.

Sunday 27 March 2016 represented the start of the northern hemisphere’s “summer season” (S16). This is when airline schedules are significantly adjusted to cope with the seasonal changes in demand, and when European airlines typically launch the bulk of their new routes for the year. According to anna.aero’s comprehensive database, the number of new airline services being launched in the first three weeks of the summer season is just over 320, which is down on the same period during the last two years when we identified around 460 in both 2014 and 2015. Whether this is down to the re-timing of Easter, uncertainties in the global economy, growing capacity constraints at some airports, airlines launching routes later during the summer season, or some other factor is unclear. These new services will be operated by almost 100 airlines operating to airports spread across some 80 countries.

Ryanair’s business model continues to evolve but that hasn’t stopped it being by far the busiest airline (yet again) when it comes to new route launches at the start of the summer season. However, in the first three weeks of the summer season this year (22 March to 11 April) it has launched 41 routes, whereas in the equivalent period last year (24 March to 13 April) the figure was 38, and in 2014 it was over 60. However, that is still almost twice as many as any other airline with easyJet (21), Flybe (16) and Transavia (16) the nearest competitors. Ryanair’s 41 new routes involve 52 airports with no airport attracting more than six new routes, the number of new services that the ULCC is adding from its Rome Fiumicino base. Then comes Athens with five new routes and Manchester and Malta with four each. A total of 35 airports have gained a single new Ryanair route.

Similarly, easyJet’s 21 new routes are spread across 31 airports with only Naples and Venice Marco Polo (with four new routes each) attracting more than two new easyJet services at the start of the summer season. For airlines starting lots of routes from a single airport then this summer’s winner is Transavia, which has launched 10 routes from its new Munich base, followed by Flybe with eight routes from its new Doncaster Sheffield base. 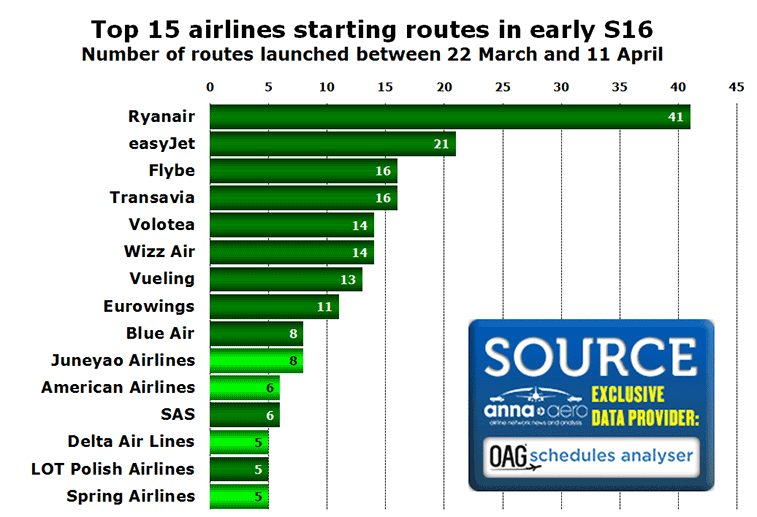 European carriers (in dark green) dominate the rankings with Juneyao Airlines of China the leading non-European airline, thanks to its expansion from its base at Nanjing. Three other non-European airlines make the top 15 rankings with two US carriers, American Airlines and Delta Air Lines, and a second Chinese carrier, Spring Airlines, joining the 11 European carriers at the top of the rankings.

France and UK tie in battle of the FIGUS countries

Analysis by country market reveals that, as usual, this summer’s new routes are dominated by services to European countries, with the FIGUS markets (France, Italy, Germany, UK and Spain) taking the top five positions, significantly ahead of the massive US and China markets. Germany, which has topped this ranking in each of the last two years falls to joint fourth with Italy, despite the opening of Transavia’s new Munich base. Lufthansa has started just four new routes, well beaten by its low-cost subsidiary Eurowings which logged 11 new routes. airberlin has only started one new route so far this summer from Germany.

France ties with the UK with 58 new routes, helped by seven new domestic services, which are counted twice as both ends of the route involve a French airport. Volotea generates the most new French routes followed by Air France and easyJet. A total of 23 different airlines have started new French services at the start of the summer season.

The UK’s 58 new routes are driven by Flybe (with 19 new routes from UK airports) and Ryanair with 16. Remember, domestic routes are counted twice in this analysis which explains why Flybe’s route count here is three more than in the first analysis. easyJet, Vueling and Wizz Air have each started a further five new UK routes.

Ryanair and Vueling lead the way in Spain, each responsible for 10 of the 50 new routes recorded, well ahead of Flybe and Iberia, while in Italy Ryanair (21 new routes) and easyJet (12 new routes) between them account for almost two-thirds of all Italian route launches. 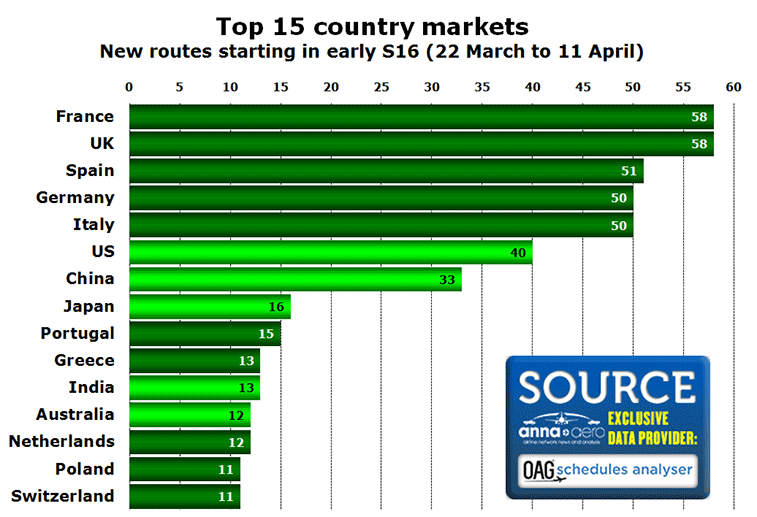 Apart from China and the US, three other non-European markets (shown in light green) make the top 15; India, Japan and Australia. It is worth remembering that operations at many airports outside of Europe are not slot co-ordinated (unlike at most major airports in Europe), meaning that airlines feel less compelled to start new services at the start of the summer season, when demand is often still quite low.

As regular readers of anna.aero will know, even after the peak at the start of the summer season, the number of new routes launched each week around the world will continue to be high until about mid-July. So if your airport or airline is going to start or welcome a new route this summer, make sure the route celebrations are well-recorded and send us the pictures, so that we can share them with our readers. Aside from the commercial failure of Concorde, the other great aviation mystery of all time is why Europe has a huge global lead in route launch cakes while the rest of the world trails in taking the art of nutritious new route marketing seriously. Romania’s Blue Air came in the world top 10 of route launches with eight routes and was greeted with these masterpieces on arrival in Madrid, Birmingham, Hamburg and Iasi. Vote for your favourite cake from one of 40 route launch cakes submitted for our Cake of the Week online poll.