Kansas City Airport celebrated the start of American Airlines’ new service to New York LaGuardia on 5 April with this fantastic cake. Cutting the cake is inaugural passenger Seanah Nichols who was taking her first ever flight. As a result of hearing that it was her first flight, American Airlines very kindly upgraded her ticket to first class. Services on the 1,775-kilometre sector will be served twice-daily onboard the carrier’s E170 fleet. Seen celebrating the new service by taking a selfie with inaugural passengers Scott Kagarice and Daniel Palen is Joe McBride, Senior Manager, Marketing & Communications, Kansas City Airport (left). 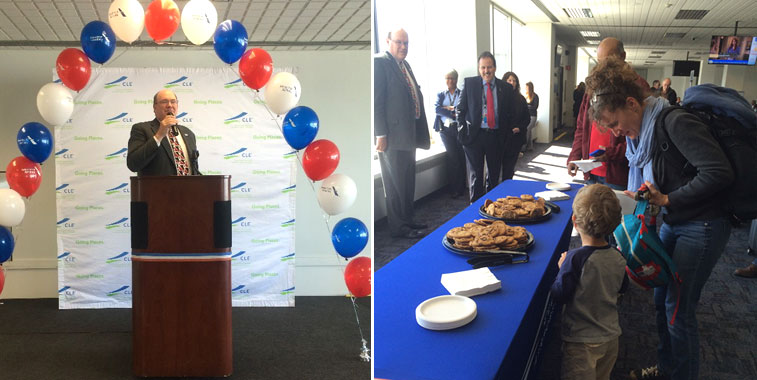 Cleveland Airport held a small ceremony to herald the start of American Airlines’ new service from Washington Reagan which included cookies for the first passengers. Speaking at Cleveland Airport before the inaugural departure to the US capital was Todd Payne, Chief of Marketing and Air Service Development, Cleveland Hopkins International Airport.

On 5 April Madison Airport in Wisconsin celebrated the start of American Airlines’ services from Charlotte with a traditional route launch cake. Flights on the 1,139-kilometre sector will be flown twice-daily. Speaking to the local media before the first flight were: Brad Livingston, AAE, Airport Director for Madison Airport; Joe Parisi, Dane County Executive; and William Glunz, Regional Director of Government Relations, American Airlines.