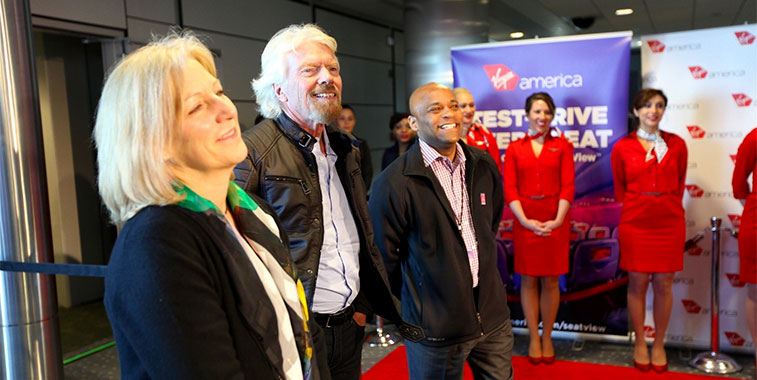 Denver recently became the newest destination on Virgin America’s network with the launch of thrice-daily flights from San Francisco. Despite a fleet of 60 aircraft, Virgin America only accounts for just over 1% of US domestic seat capacity, but it has a major presence at both Los Angeles and San Francisco airports in California.

With a fleet of 50 146-seat A320s and 10 118-seat A319s, Virgin America has a 1.13% share of the US domestic market in terms of seats according to OAG Schedules Analyser data for the second week of April 2016. This ranks it 11th, with Alaska Airlines (which recently announced that it would be acquiring the carrier during the course of the year) having a 4.51% share. However, even with the extra capacity from Virgin America, Alaska’s future market share of around 5.6% still leaves it in fifth place, a long way behind United Airlines in fourth place (with 15.3% of the market), but now significantly ahead of sixth placed JetBlue Airways with 3.85% of the market.

Virgin America finally began scheduled operations in August 2007, after several attempts were made by rivals to prevent its launch. In recent years the airline’s growth has slowed as it has focussed more on profitability. Last year just over seven million passengers flew with the airline, an increase of 8.1% on the 6.51 million who flew with the carrier in 2014. Passenger load factors in both years was just over 82%. In the first two months of 2016, passenger numbers are up almost 17% compared with 2015. 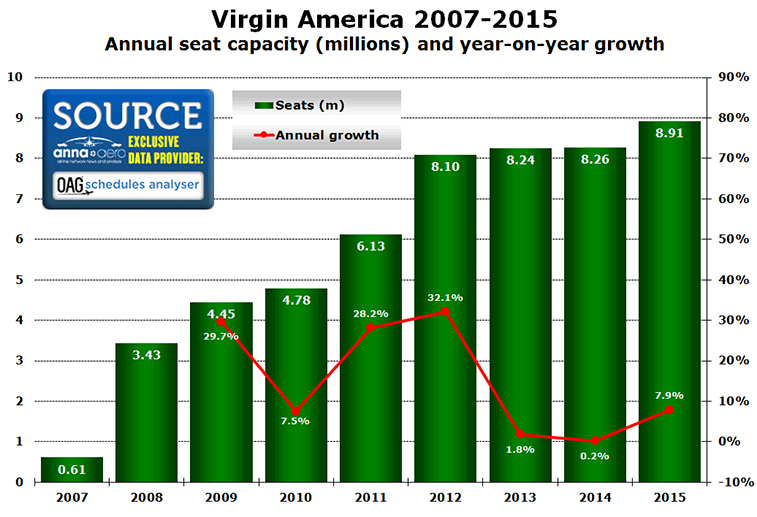 With bases at both Los Angeles and San Francisco airports, these two facilities are by far Virgin America’s busiest in terms of weekly flights. Third ranked Dallas Love Field only joined the airline’s network in October 2014 after the repeal of the Wright Amendment allowed flights to more distant destinations from the Texan facility. In total the airline currently serves 24 destinations, including three in Mexico (Cancún, Puerto Vallarta and San Jose del Cabo). The most recent addition to the network was Denver. Flights from San Francisco were launched on 15 March of this year. 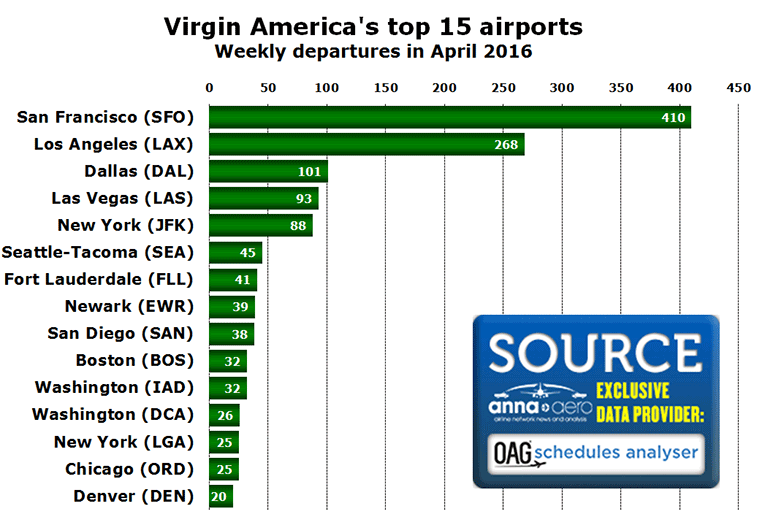 JFK routes are biggest as measured by ASKs

Virgin America offers a range of transcontinental services giving the airline a relatively long average sector length of around 2,300 kilometres. While the route between its two bases in California offers the most weekly flights (over 70 each way), taking sector length into account, the airline’s biggest routes (as measured by ASKs – Available Seat Kilometres) are its two services to New York JFK. Flights from Los Angeles and San Francisco to Boston, Fort Lauderdale, Newark and Washington Dulles round out the top 10 of the airline’s biggest routes. 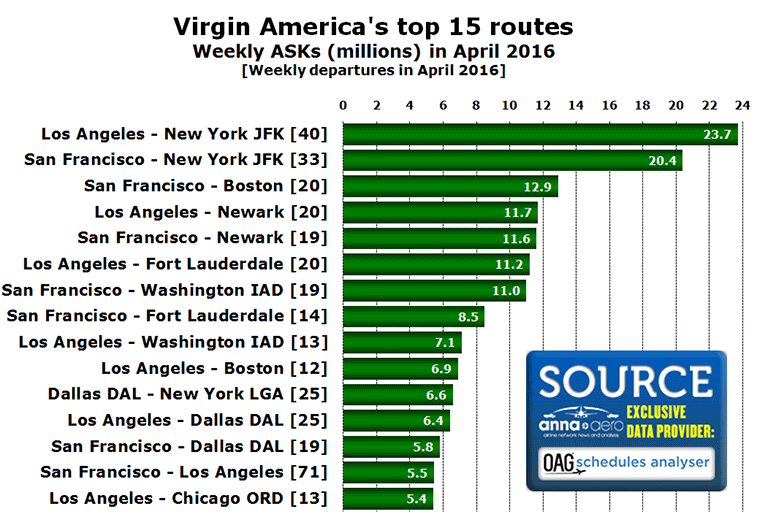 Philadelphia and Toronto failed to deliver

In over eight years of operations the airline has, not surprisingly, had a few routes that have failed to deliver acceptable results and are no longer part of its network. These include:

Of these airports Anchorage, Orange County, Philadelphia, San Jose and Toronto are no longer served at all while the others are still served but from other airports. Just two more new routes, from Los Angeles to Hawaii, are currently planned for this summer.

Virgin America’s next two route launches are to Hawaii, both from Los Angeles; to Honolulu on 5 May and to Kahului on 14 June.