Nearly 7,500 votes cast in S16 Cake of the Week competition; Cluj-Napoca Airport beats 40 other global airports to secure the title 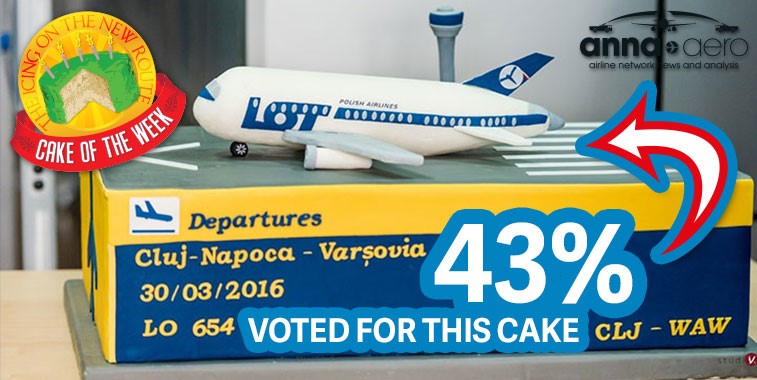 Over four in every ten votes cast in our Cake of the Week S16 competition was in favour of this traditional aircraft-emblazoned effort from Cluj-Napoca Airport in Romania. While the aircraft looks nothing like the LOT Polish Airlines Q400 which operates the service, with over 3,250 votes the public clearly don’t care whether the cake is ‘anatomically correct’ in this regard. This is something that anna.aero data elves find it hard to deal with.

Here’s last week’s Cake of the Week top 10 results, which saw Cluj-Napoca Airport’s cake for LOT Polish Airlines’ route launch from Warsaw Chopin triumph. With over 1,100 votes more than its nearest rival – Birmingham Airport’s baked beauty for the arrival of Qatar Airways ‒ the small regional airport in Romania did it for the little boys!! Interestingly, every single one of the 41 cakes received at least one vote.

Following last week’s impressive 41 entrants for the public vote, it’s back to normal business this week, with anna.aero’s data elves back in control (where they like to be) of the ‘normal’ weekly competition. The next time the public will get to decide the fate of airport marketing teams’ career progression will be for the W16/17 kick-off in late October. Looking at anna.aero’s New Route Database, there are already over 110 route launches planned for the first two weeks of the winter season. Last week we were also sent 36 new route FTWAs – see our Fire Truck Water Arches results here. A familiar Romanian airport was also victorious in this competition too.

N.B. The airport names which are underlined are the bakers of the cakes in question.

Awards Cake of the Week CLJ