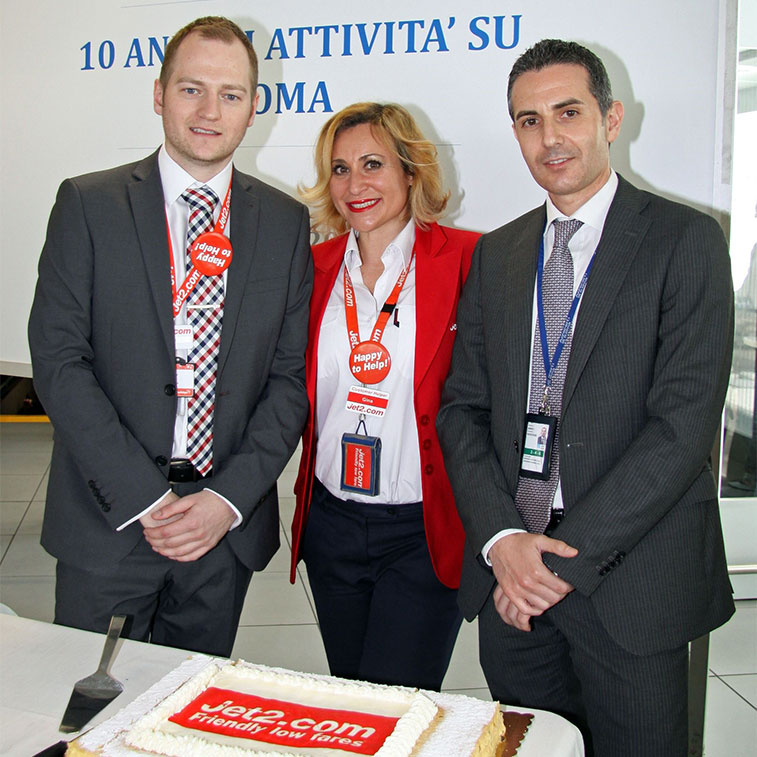 Jet2.com celebrated its 10th anniversary of services from Rome Fiumicino Airport on 7 April. The airline is celebrating this important milestone by also announcing that it has carried 1.2 million passengers from the Italian capital to four airports in the UK, namely Glasgow, Leeds Bradford, Manchester and Newcastle. Seen celebrating the carrier’s decade of flights from the Italian capital with a cake are: Benjamin Spencer, Overseas Airport Manager, Jet2.com; Gina Mariotti Ground Operations Duty Manager, Rome Fiumicino; and Federico Scriboni, Route Manager for Europe, AdR. Commeting on the occasion, Scriboni added: “Jet2.com is increasingly establishing itself as a major carrier, in serving a strategic market such as the UK. We are very satisfied in reaching this important milestone.” 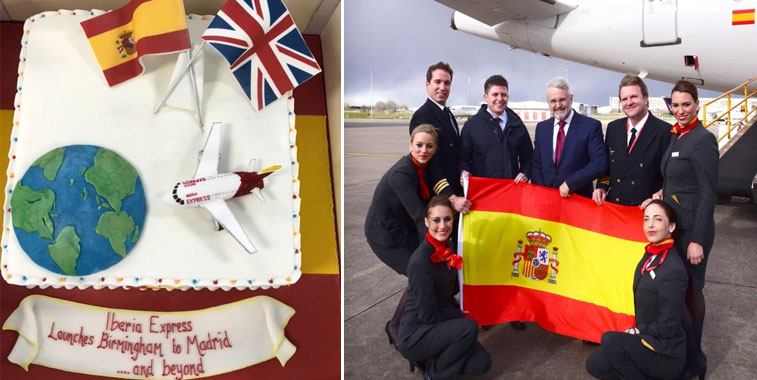 On 6 April Birmingham Airport celebrated the arrival of Iberia Express which commenced services from Madrid to the UK’s second city on 27 March. Seen celebrating the arrival of the carrier to Birmingham with the crew are Trevor Martin, Iberia Express’ Head of Revenue Management and Network, and Paul Kehoe, CEO Birmingham Airport. Kehoe commented: “Not only is this great news as it increases capacity to Madrid, but Iberia Express is also a oneworld alliance airline and BA codeshare carrier, giving travellers enormous benefits.” Iberia Express is one of three airlines to serve the Birmingham to Madrid market, with Norwegian and Ryanair also serving the city pair. A fourth carrier, in the form of Monarch Airlines, will begin operating on the airport pair in June.

On 31 March HOP! commenced services between Rennes and Amsterdam, with the latter airport welcoming the arrival with a traditional water arch salute. Inaugural passengers were also greeted on arrival with Stroopwaffels. Passengers and Dutch press were invited to the the airport’s press room where presentations were held by: Lotte Harbers, Aviation Marketing Director, Amsterdam Schiphol Airport; Toon Balm, VP Sales and Services, KLM; and Gilles Tellier, Director, Rennes Airport. 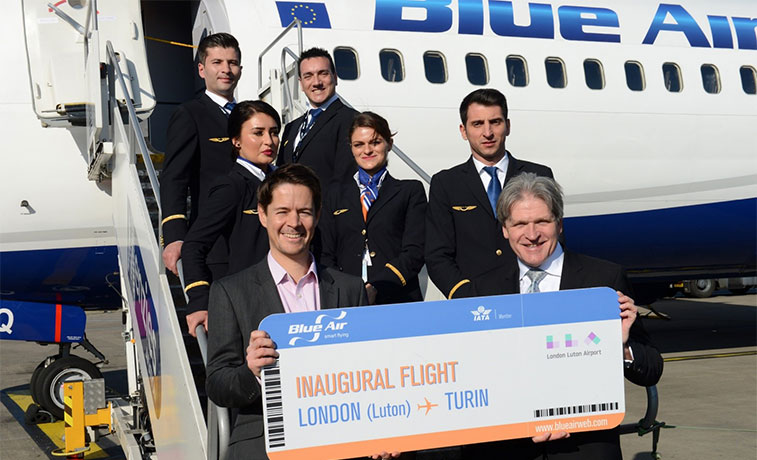 On 29 March London Luton welcomed the arrival of Blue Air’s inagural service from Turin, a route which the carrier will serve four times weekly. Simon Harley, Head of Business Development, London Luton Airport (bottom left), commented: “We are delighted to launch new flights with Blue Air to Turin and look forward to Larnaca launching in April. The new services are a great addition to our route network and is testament to Blue Air which is going from strength to strength and is already well-established at Luton.” Blue Air already serves Bacău, Bucharest and Iași from the London airport. 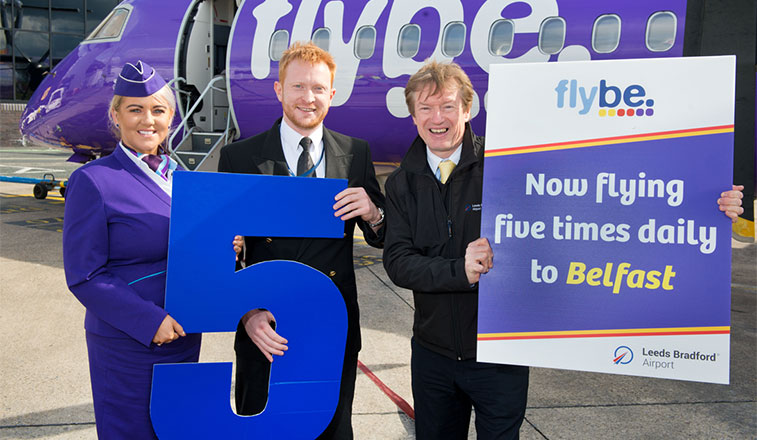 On 7 April Flybe announced that from 4 July it will add a fifth daily service on its route from Belfast City to Leeds Bradford. Seen celebrating the news along with Flybe crew is Tony Hallwood, Aviation Development Director at the Yorkshire airport. Hallwood commented: “Belfast continues to be one of Leeds Bradford’s strongest routes on our growing domestic network. We are pleased to work with Flybe to deliver increased frequency and provide increased flexibility for our business and leisure passengers.” 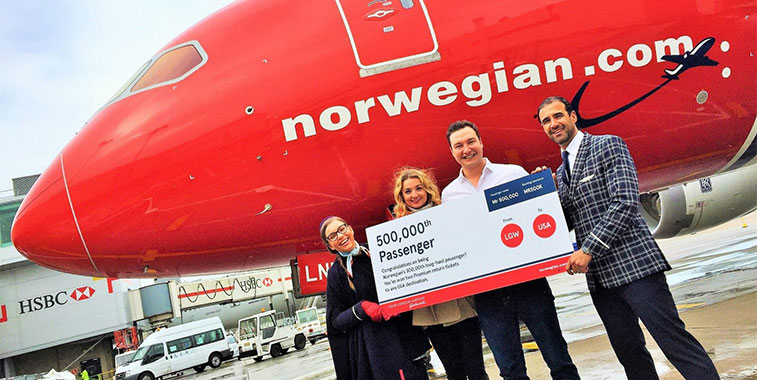 This week Norwegian celebrated the milestone of carrying its 500,000th long-haul passenger from London Gatwick. Sam Holden, 29, from Dorchester this week became the milestone passenger as he boarded a flight from Gatwick to Boston. To celebrate the landmark, crew members presented Sam and his girlfriend with a free pair of Premium tickets for any Norwegian long-haul flight. Norwegian now offers services from Gatwick to seven long-haul destinations, namely New York JFK, Los Angeles, Boston, Oakland (launching 12 May), Orlando, Fort Lauderdale and San Juan in Puerto Rico. 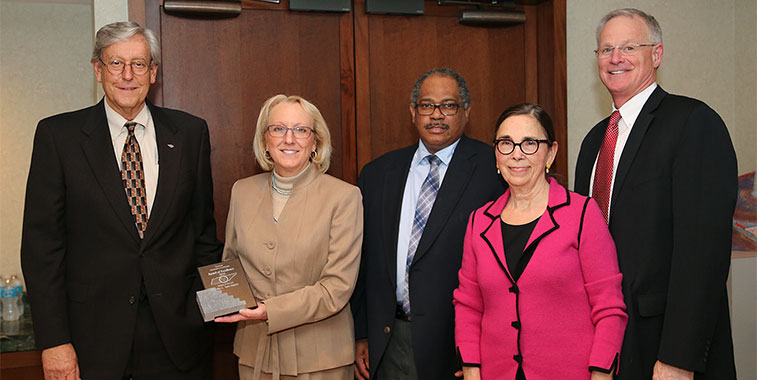 John C. Tune Airport in Nashville was recently named the 2016 Airport of the Year by the Tennessee Department of Transportation’s Aeronautics Commission and the Tennessee Aviation Association. The award was given to the facility for recent major reconstruction and safety enhancement projects, as well as the airport’s terminal modernisation. Seen with the award are: Rob Wigington, MNAA (Metropolitan Nashville Airport Authority) President and CEO; Kathy Hatter, MNAA Manager of John C. Tune Airport; Aaron Evans, MNAA Director of Operations; Juli Mosely, MNAA Board Chair; and Doug Kreulen, COO, MNAA.

On April 11 the Calgary Airport Authority launched a new program featuring canine companions to enhance the passenger experience at Calgary Airport. The Pre-Board Pals program —a collaboration with Pet Access League Society (PALS) — brings furry guests and their volunteer sidekicks, to one of Canada’s busiest airports to interact with and bring smiles to the millions of visitors that come through the airport each year. “Pre-Board Pals demonstrates our commitment and passion for providing an amazing airport experience,” said Garth Atkinson, President & CEO for Calgary Airport Authority.